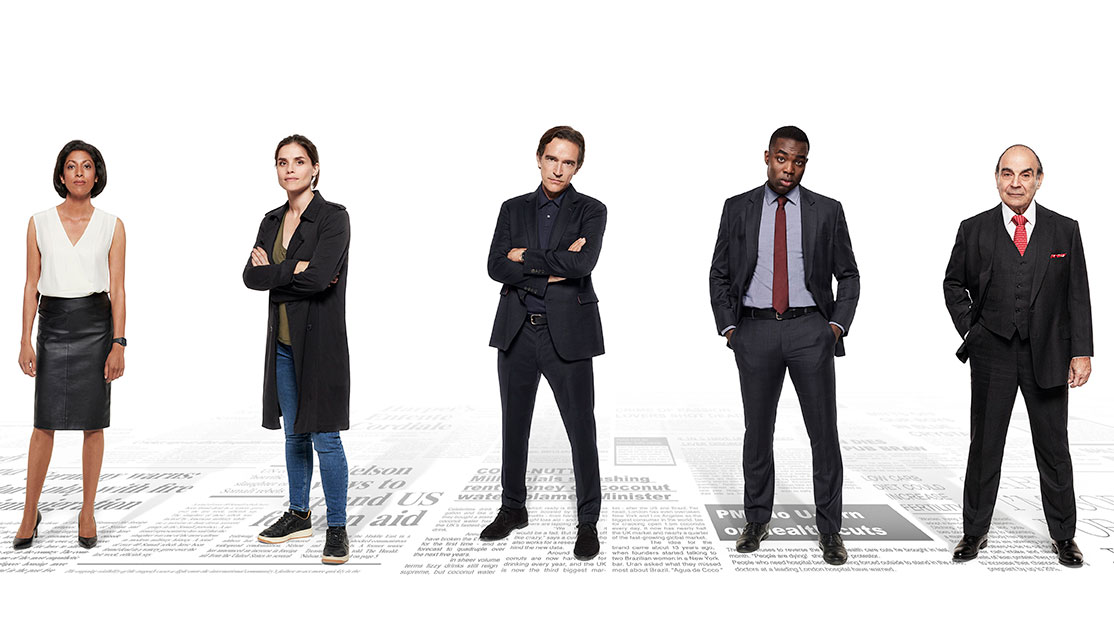 Journalists from two competing newspapers go head-to-head in Doctor Foster creator Mike Bartlett’s latest BBC1 drama, Press. DQ went on set to speak to the writer, executive producer Faith Penhale and the cast about this examination of the fourth estate.

Unusually for a national tabloid newspaper, the floor of The Post is quiet and still. Computer screens are turned off and chairs sit empty beneath large signs displaying the publication’s bright red masthead.

In the next room, however, dozens of extras are lining up, ready to take their places on the set of Mike Bartlett’s new drama, Press. Set in the fast-paced and challenging environment of the British newspaper industry, the series aims to explore the personal lives and constant professional dilemmas facing journalists as they attempt to balance work and play amid the never-ending pressure of the 24-hour global news cycle and an industry in turmoil.

On one side are the employees of The Post, a traditional tabloid newspaper known for entertainment and scandal, while on the other are those working for The Herald, a left-leaning broadsheet. When The Post moves into new offices directly opposite The Herald, these two groups of journalists and the newspapers they represent are thrown into direct conflict.

The six-part series is produced by Lookout Point, BBC Studios and Deep Indigo for BBC1, and coproduced with PBS strand Masterpiece in the US. BBC Studios is handling international distribution.

Bartlett, best known for BBC1 drama Doctor Foster, says he had wanted to write about newspapers and the press for a long time, describing the newsroom as “the ideal place for a drama.” He reveals he first pitched the idea 10 years ago, but since then the phone-hacking scandal and subsequent Leveson Inquiry in the UK have brought the operations of newspapers and journalists into sharper focus. And in the age of Donald Trump and so-called ‘fake news,’ the press is arguably under greater scrutiny than ever.

It was a meeting four years ago with executive producer Faith Penhale, joint CEO and creative director of Lookout Point, that finally put Press into development.

“What is interesting about that is the show was initially about a quite stable industry but, over the course of researching and writing this, it became a story about an industry that is changing rapidly, and no one knows what is going to happen to it,” Bartlett explains, seated one floor above the set built inside a former office block on a north London industrial estate. “As a dramatist, it’s a wonderful world for drama because you have got new people coming in, new ways of doing things, and you have got older people who have been there a long time and are worried about losing a sense of what it used to be.”

During his research, Bartlett visited the offices of UK publications The Guardian, The Sun, The Independent and the London Evening Standard, which he says both matched and confounded his expectations. He then sat down to write.

“I got a real sense of vocation from most people I spoke to, even if it was buried underneath a load of having a hard day and being really busy,” he says. “People on all different desks in the newsroom had a real belief in what it was doing, whether it was for entertainment or revolution and political change. So the show, on one hand, is a workplace drama where people sleep together and fall out and make friends and do all the things you would expect, but I also said from the start that the stories have to come from the world of journalism. If could you tell the same story in a world set in a hairdressers then it wasn’t the right story.”

Bartlett and Penhale go to great lengths to stress that Press is an entirely fictional drama, despite the echoes of real-life publications – The Post could easily be The Sun, while  The Herald surely doubles for The Guardian – and say the show doesn’t put their own personal views on the screen, despite Bartlett admitting he’s a “leftie, Guardian-reading writer.”

“We’re telling stories in this world and hopefully showing all the highs and lows and everyday dilemmas and huge, life-changing dilemmas. It’s got everything in there but it’s entirely created,” Penhale says. “We certainly don’t shy away from the emotional drama within the stories and within the characters as they face certain challenges. Emotions run high and things can get quite punchy as a result.”

Ben Chaplin (Apple Tree Yard) plays Duncan Allen, the charismatic editor of The Post. “It was a fun role,” Chaplin says when he’s asked what attracted him to the part. “He’s a little bit amoral, which probably helps in that line of work, if tabloid editors will forgive me. He’s very persistent, he never gives up – like he’s an irresistible force.”

That means Duncan isn’t afraid of employing some “pretty shocking” tactics to get the story he wants. “I don’t think he has a lot of qualms about how you get a story, or any at all actually,” Chaplin says, referring to the ‘dark arts’ used by journalists in search of a scoop.

But to the actor, the vibe of a newsroom is rather like being in a theatre company: “There’s this camaraderie but there’s healthy competition as well. It reminded me a little bit of being shipmates, like you’re on the same ship.”

Having played a real-life newspaper proprietor before in Maxwell, a 2007 biopic about the late media magnate Robert Maxwell, Suchet was keen to avoid any links to real-life figures this time. “When I was offered the role, I said, ‘I don’t want to play [The Sun owner Rupert] Murdoch, I just want to play the character that is in the script,’ and Mike has trodden a very good line. You are not supposed to link him at all. It doesn’t feel thinly veiled and I was very keen to not put on any accents or anything.”

In the wake of recent movies such as Spotlight and The Post, Suchet believes now is a good time for TV to tackle the newspaper world. “It’s like courtroom drama,” he notes. “There have been great films in Hollywood about the press and journalism; it’s great drama and there are great characters.”

In the hands of Bartlett, that meant Press was a series Suchet couldn’t turn down: “He is the only writer, and Doctor Who [2017 episode Knock Knock, written by Bartlett] was the only programme, I have ever said yes to without reading the script. Mike’s scripts are possibly the finest scripts in media today, whether on television or film.

“When I got this script to do, it was just so good, and the relationship between my character and Duncan is really clever. It’s good dialogue. It’s really zingy. There’s nothing cliched about his writing at all. It’s very good. I think it’s going to be a very classy piece of television.”

On another day, DQ is at Three Mills Studios in east London, home to the set of The Herald, where Charlotte Riley (Peaky Blinders, Close to the Enemy) plays the broadsheet’s deputy news editor Holly Evans. Principled and passionate, she’s dedicated to journalism and it’s through her that viewers will see the personal cost of working in the industry.

“Her career has come at the expense of her personal life. She’s pretty lonely,” Riley says. “She has colleagues that she gets on well with. But the loneliness she experiences is outside the office. She lives to work – being in the office brings her to life. It’s her raison d’être. It’s quite sad that as soon as she walks through those doors, she breathes again. Being on her own she has to deal with her demons.

“What attracted me to the role is that she’s fast-thinking but the cogs turn very slowly emotionally. It’s a very detailed emotional arc for her. That was nice to play – it’s not driven by falling in love.”

Riley previously worked with Bartlett on King Charles III, the writer’s BBC2 adaptation of his successful stage play. “Coming from a theatre background, Mike and I have weekly conversations about the things we’re shooting and what’s coming up,” she admits. “It’s wonderful to have access like that to discuss every character and what’s going on and why.

“Shooting TV these days is so quick; you don’t get to be as immersed as you’d like. For most actors, mainly your training is theatre. We had a two-week rehearsal period, which is unheard of,” Riley adds. “I just really like his work, the way he writes. His characters are great.”