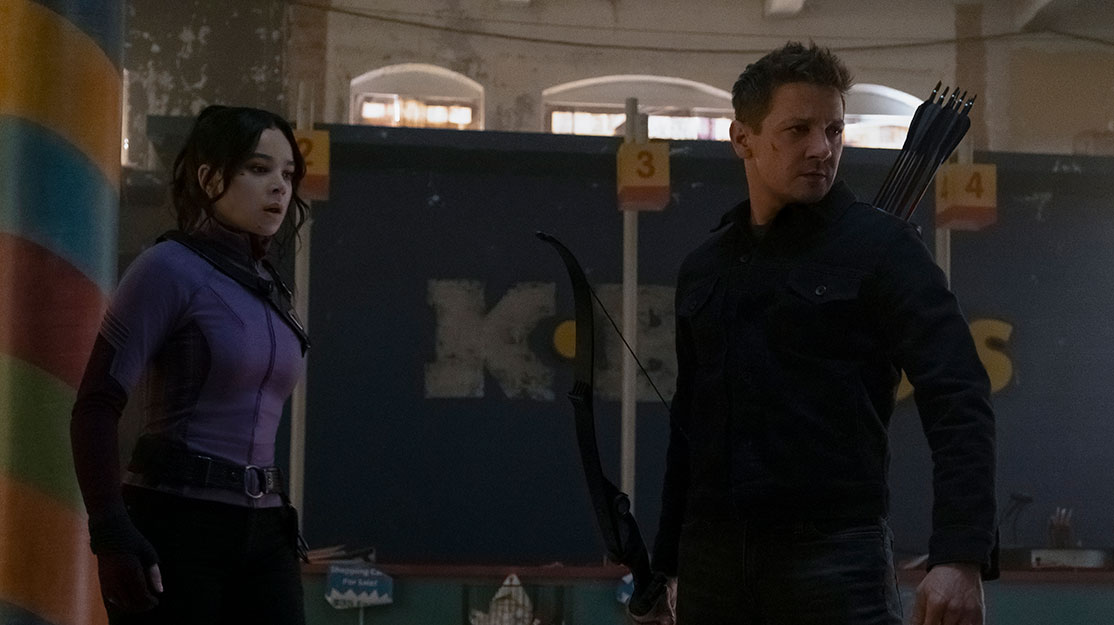 As master archer Hawkeye becomes the latest Avenger to star in their own Disney+ television series, DQ speaks to director Rhys Thomas about joining the Marvel Cinematic Universe.

When standing beside Captain America, Iron Man, Thor and The Hulk, it’s easy to understand why Clint Barton, aka Hawkeye, might get the feeling he’s not everyone’s favourite Avenger. The character may be skilled with a bow and arrow, but without any superpowers, he can often fly under the radar.

His own feeling of imposter syndrome is further fuelled in the first episode of Disney+’s latest Marvel Studios series Hawkeye, when the character spends an evening with his children at the theatre. They just happen to be seeing an all-singing, all-dancing show called Rogers: The Musical, inspired by Steve Rogers – Captain America himself.

He does have one fan, however, and in a dazzling opening sequence, a young Kate Bishop is left starstruck by Clint (Jeremy Renner) and is inspired to take up archery herself.

When the story then picks up in the present day, set in ‘post-blip’ New York City following events in feature film Avengers: Endgame, Clint is on a seemingly simple mission: to enjoy Christmas with his family. But when a threat from his past shows up, he reluctantly teams up with the now 22-year-old Kate (Hailee Steinfeld) to unravel a criminal conspiracy that will feature old and new characters from the Marvel Cinematic Universe (MCU).

Hawkeye has another fan in Rhys Thomas, the series’ lead director and an executive producer who named the archer as his favourite character when asked during a meeting with Marvel. It is writer Matt Fraction’s 2012 run of Hawkeye comics that he is particularly fond of, describing them as a fun, alternative take on a superhero – a tone Thomas has carried with him into the series.

“I felt for the guy. He’s like the fifth Beatle of the Avengers,” Thomas tells DQ. “I found that both amusing and tragic, and what Matt does a wonderful job of is really exploring Clint’s bruised sense of self-worth that he wears. He’s given that identity of Hawkeye, the hero and the Avenger, but he doesn’t wear it comfortably and almost has this imposter syndrome. In the MCU, Clint’s got this dark past. He lost his family, he becomes [vengeful killer] Ronin, and Natasha [Romanoff, aka Black Widow] sacrifices herself so he can have his family back. It felt like a mix-up of how can a man be at peace with that past and how does he move on?”

Thomas’s directing credits include US sketch show Saturday Night Live and comedy parodies Documentary Now and Comrade Detective, a 1980s-set Romanian cop show dubbed by US stars such as Channing Tatum and Joseph Gordon-Levitt. It all adds up to a melting pot of styles and tones that drew him to the attention of Marvel Studios and super producer Kevin Feige.  Now in Hawkeye, he gets to work with the comedy and action you might expect from a Marvel film or series, plus a musical, all set against the backdrop of New York at Christmas.

Set two years after Endgame, Hawkeye also reintroduces Clint’s Ronin guise in an unexpected way. “But it was important to Marvel that we also enter in a low-stakes manner, which comes a little bit from the Fraction tone as well the fact that, ostensibly, Clint’s just trying to enjoy Christmas with his family. Then you just watch things slowly snowball out of control, but trying to keep it more focused and centred [on him] was a key component.”

There’s a certain framework that comes with creating any show for the MCU, with Hawkeye not only designed to tell Clint’s story but also introduce new characters joining the universe and feature existing characters previously seen elsewhere. Natasha’s sister Yelena Belova (played by Florence Pugh), who was first seen in recent blockbuster Black Widow, is among those set to make guest appearances.

“Part of the writing process was knowing we have to have a character and they have to come in and we’ve got to set them up,” Thomas explains. “It was an interesting project to try to narratively figure out in that way because there are certain things coming in that you need to service and along the way, certain things that have to happen. It’s a challenge, but it’s a helpful framework as well.”

Notably, the first two episodes don’t centre on Clint as much as they do Kate, revealing details of her privileged yet difficult home life and then how she stumbles into meeting the title character.

“It’s interesting starting with her because, yes, it is a surprising introduction but it felt like the right way to introduce her,” Thomas says. “You get to come in on her point of view and it also helps you set up what Hawkeye means to her. That’s really what it’s about initially – setting up this version of him so we can come to understand, both through her eyes and his, what he means later on. It was a strong way to bring her in and a great way to frame him.”

As lead director, Thomas helms the first, second and final episodes of the six-part series, with directing duo Bert and Bertie (Amber Templemore-Finlayson and Katie Ellwood) picking up the remaining three parts. While there are some notable camera flourishes, not least the numerous overhead shots that frame the action from above, Thomas says the intention with the show’s visual style was always to keep the story grounded and to see events through the characters’ eyes.

“Even with the action, it was important to me philosophically that although Marvel is known for big action sequences, I didn’t want the action to overwhelm the story or the character’s story,” he says. “When we’re in a car chase, it should be more about the dynamic of the characters and what they’re going through. To me, that’s the memorable part of any good action sequence, because we’ve all seen very flashy things. It’s hard to beat a lot of what’s out there, so we wanted to keep the story front and centre.”

The 98-day shoot took place on location in New York and then on studio sets in Atlanta. “I was quite a tyrant about making sure our geography made sense in terms of where people’s apartments were and how they got from here to there,” Thomas says. “I hate fake geography in movies! Then we worked with our visual effects team to be true to that as well in terms of gathering those backgrounds and environments. We were really quite forensic about it when we went to New York, just gathering as much as we could so we could build an accurate version of the city [in the studio].”

When it comes to creating the action sequences seen on screen, which notably see Clint and Kate involved in fist fights, car chases, juggling Molotov cocktails and flying through the air on zip wires, “they start as ideas on the page in terms of what you want out of them story-wise, and then the stunt team go and essentially build a choreography out of that,” the director says. “You get these wonderful videos of stunt people surrounded by cardboard boxes, acting out the sequence. You start editing and tweaking it, and then it passes over to the actors to rehearse.

“It’s a fun process where you get to build it and evolve it. Marvel put you with the best people there are as well. That was the one side where you felt like you didn’t have to worry. The main philosophical thing was I just wanted it to feel real. These characters do get hurt and they can’t fly. Not getting too carried away with any of those aspects was the main guiding point.”

Another guiding point on the show was Renner, who has now played Hawkeye on screen in five MCU films dating back to Thor in 2011.

“Obviously, it’s his show,” Thomas says of the star. “He knew what was going on from very early on, he had an input into and understanding of where things are going. Then Hailee was such a clear Kate Bishop that it was always written with her in mind. I never questioned it. And in terms of the other characters, a lot of them were written [first] but then, as you start casting, you start refining things and having conversations with the actors. What’s great about Marvel is there is an openness to that and you’ve got the tools and the time and understanding to make it more right for each individual.”

The director says that time has been his biggest enemy working on the show, joking that trying to do a six-hour movie on a TV schedule “definitely gives you some sleepless nights.” Then there’s the expectation that Hawkeye will slot seamlessly into the MCU and have all the hallmarks of those feature films on the small screen. “It all has to feel big and Marvel-like, and pulling that off on a much tighter time frame is definitely one of the big challenges.”

But following in the footsteps of WandaVision,  The Falcon & The Winter Soldier and Loki, which have all brought the MCU to television in their own unique ways, Hawkeye is similarly set to continue the spirit of the films while thrilling and surprising fans in equal measure when it launches on Disney+ on November 24.

“Kevin Feige and his team just have such a clear understanding of expectations, and they’re all crazy fans themselves,” Thomas says. “That’s what’s really funny. There are no bigger fans and they can tell you everything about every character. It’s that dedication and enthusiasm that means they’ve set a bar for themselves, because they know what would satisfy them. They just have such a clear sense that you can’t question it.”

Throughout Hawkeye, both Clint and Kate are faced with questions about their past and the choices they make, while the series also confronts ideas of identity – in terms of both how you see yourself and how other people see you.

“It’s about the future, too. It’s about moving on. We’re setting up a world to come as well,” Thomas adds. “To do that, you have to close out some of the baggage Clint has and introduce new characters.”