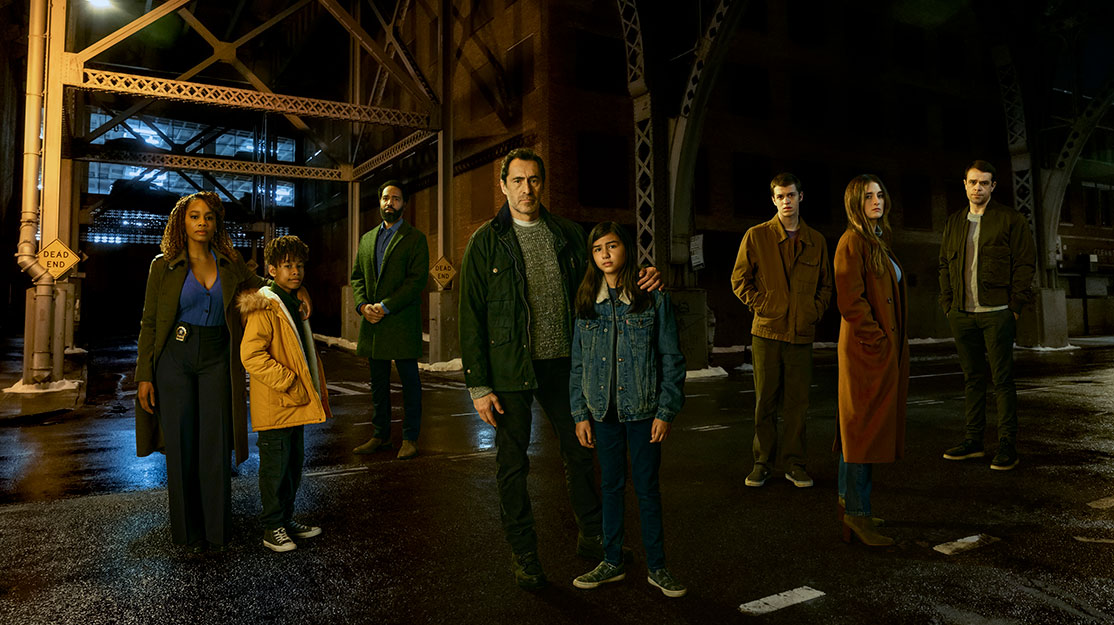 Marty Adelstein and Becky Clements from Tomorrow Studios invite DQ inside to discuss making Let the Right One In, Showtime’s series adaptation of the Swedish vampire film of the same name.

When his daughter first suggested he watch a Swedish vampire film, US producer Marty Adelstein wasn’t convinced. “I’ve seen too many vampire movies,” he said. But when she told him Låt den rätte komma in (Let the Right One In) was actually a tense psychological thriller, he decided to see what the fuss was about.

He watched the movie and then said: “I’m going to make it into a TV show.”

That was around seven years ago. Since then, a US remake of the film, called Let Me In, has also been released. But now Adelstein, founder and CEO of Tomorrow Studios, and his partner and president Becky Clements are preparing for the launch of a 10-episode series, also called Let the Right One In, inspired by the original Swedish film and the book by John Ajvide Lindqvist on which that was based.

“Little did I know it would take seven years and two pilots to get it on the air, but it was something that always stuck with me and it’s just something I always wanted to see on the air,” Adelstein tells DQ. “I’m really proud of what we’ve done with the material.”

Commissioned by US premium cable network Showtime, the thriller centres on Mark (Demián Bichir) and his daughter Eleanor (Madison Taylor Baez), whose lives changed forever a decade ago when she was turned into a vampire. Locked in a 12-year-old’s body, perhaps permanently, Eleanor lives a closed-in life, able to only go out at night, while her father does his best to provide her with the human blood she needs to stay alive.

The series begins when the pair move into a new apartment in New York City. Mark seeks work from his old acquaintance Zeke (Kevin Carroll), while Eleanor strikes up a friendship with the boy next door, Isaiah (Ian Foreman), whose detective mother Naomi (Anika Noni Rose) is investigating a gruesome death. Meanwhile, Arthur (Zeljko Ivanek) calls on daughter Claire (Grace Gummer) to help cure her brother Matthew (Nick Stahl) from a mysterious disease.

Produced by Tomorrow Studios and distributed by Paramount Global Content Distribution, the series comes from writer and showrunner Andrew Hinderaker (Away, Penny Dreadful). Seith Mann (Homeland) directed the pilot and other episodes.

Once Adelstein was set on bringing Let the Right One In to television, he spent “two or three years” chasing the rights to the film – a process that was complicated by the American remake. He was eventually able to do a deal with Simon Oakes, CEO of Hammer Films, the company that held the rights.

However, a first pilot attempt at US cable network TNT failed to land. Then Tomorrow took a second stab at it with Showtime, which snapped it up, commissioning a full season in September 2021. Filming began in New York earlier this year.

“The pilot at TNT just didn’t work, but we didn’t give up on it,” Adelstein says. “We went out [again] and Showtime really liked it. Andrew wrote a great script and we were off to the races on it.”

“Andrew has done a tremendous job,” says Clements. “When he knew we had the property, he met with [co-executive producer and Tomorrow Studios senior VP of development] Alissa Bachner and said, ‘I want to come back and pitch. I have to do this.’ He had just created Away and was co-showrunning that, but he came in and he developed a show that really is a beautiful, emotional story that asks how far you would go to protect your child, with a vampire story wrapped around it. That’s what we love about it.”

Describing the series as a “genre overlap,” Clements says Let the Right One In is as much a family story as it is a show about vampires. Hinderaker then expanded the show’s scope and scale by telling the story through the lens of addiction, one of the main themes of the series.

“We are so proud of the material. We enjoy working with [Hinderaker]. He’s an absolute superstar and our cast is phenomenal,” Clements says. “It’s always fun for us when we have an idea of what we want something to be and the quality of the material and the quality of the experience is so positive, including with our partners at Showtime. They are just absolutely clear, direct and creative. I wish every show we made went this well. Granted, it was a long journey to get here, but we’re very proud of it. We’re very excited.”

Through the opening episode, the series begins with a stylish, contemplative and emotionally driven sensibility that breaks for sudden moments of horror that you might expect from a show with vampires. That approach, says Clements, was very much inspired by the original film.

“That film has more emotional intimacy than most movies that aren’t horror movies,” she says. “That is something that we really needed and that’s what distinguishes it [from similar shows]. We really wanted to maintain that emotional intimacy, which is always a challenge when you also need stakes and you need drama and you need horror. I feel that we’ve done a really great job of it.

“In some episodes, what’s happening to the characters is heartbreaking; and in other episodes, it is a full horror show. I think our balance is quite right for whatever your access point is. But that is the core of what distinguishes it from other horror shows – it is personal and hard and heartbreaking. That was important and I feel like we nailed that.”

It’s the relationships that push the series forward, particularly those between Mark and Eleanor and Eleanor and Isaiah. Adelstein says vampires are a big part of the show, but really “it’s about a family and what one will do and sacrifice for their child.”

Connections are also a key theme. “Everyone is in a moment of, ‘Where are the possibilities for me to connect?’ For this father and daughter, to see them have connections for the first time is just so uplifting,” Clements notes. “I hope these people get to live some sort of life and can step out of the horror. The search for connection is a big part of what would bring in viewers who aren’t horror fans.”

Development began pre-pandemic, at a time when Clements and Adelstein could give notes in person. But with Showtime execs Gary Levine, David Nevins and Amy Israel already fans of Hinderaker, everyone was soon on the same page. “They are crystal clear on their point of view. It was a dream,” says Clements. “It was exactly how you want working with a network to be.”

“It was one of the best development processes I’ve been through,” Adelstein adds.

When it came to casting, Clements says Bichir (The Bridge) was “a delight” and describes  Rose (Maid) as “so accomplished,” while casting children “is always a challenge.” They found their Eleanor in Baez, who appeared in Selena: The Series and also showcased her singing talents in this year’s America’s Got Talent. Foreman’s credits include appearances in Ordinary Joe and film The Holiday Switch.

“Madison is experienced, had a very long resumé and is such a dedicated actor. Then Ian just made us all smile. He was the sunshine that got plopped into this world,” Clements says. “Grace is also fantastic. As individuals and talented professionals, they all just won us over – and that was all on Zoom. We did do a chemistry read with Madison and Demían, and with Ian and Anika. It was really mostly for the other actors to see the kids, because they have to play parents. It was really wonderful.”

For a series where the protagonist is only allowed to venture around the city at night, a lot of the show is naturally set after sundown. To film those scenes, “we cheated a little bit,” Clements admits, with numerous sets built on stages in Glendale, Queens, used to film scenes set at night during the day.

“We love New York. Should we have a future [with the show beyond season one], we want to lean in to New York and the vibrancy of that environment. But if you pay attention, you’ll recognise that our production designer did an amazing job building sewers and all of these kinds of places where you would think we were in a real sewer, but we were in a controlled fashion on stage so we could all have a little bit of a life [while filming].”

Let the Right One In is now just one of numerous series produced by Tomorrow Studios, which is behind a slate that also includes Snowpiercer, Rose Byrne-led Physical, animated series 10 Year Old Tom and One Piece, a manga adaptation for Netflix.

The company also recently struck a first-look deal with Ozark star Julie Garner and her label Alma Margo, and is adapting Claire Vaye Watkins’ novel I Love You But I’ve Chosen Darkness, with Stephanie Laing (Physical, Snowpiercer) attached to direct.

“There is a real variety in the stuff we make and it really comes from our taste and what we find interesting to us,” Adelstein says. “We buy IP that we like, we buy new IP and we dig into old IP to see what hasn’t been made that should have been made. that’s really how we judge it.”

Now when Let the Right One In launches on Showtime’s online platform on October 7 and then on its cable channel on October 9, the producers promise to take viewers into a story inspired by – but expanded beyond – the original book and film. Paramount+ will air the show in the UK, among other territories, from October 8.

“There’s just more,” Clements says of expanding on the original source material. “We grow the family drama, we grow the number of people in the world. Then everything we’ve established reaches an incredible crescendo by the season’s end that will surprise you in many ways.”