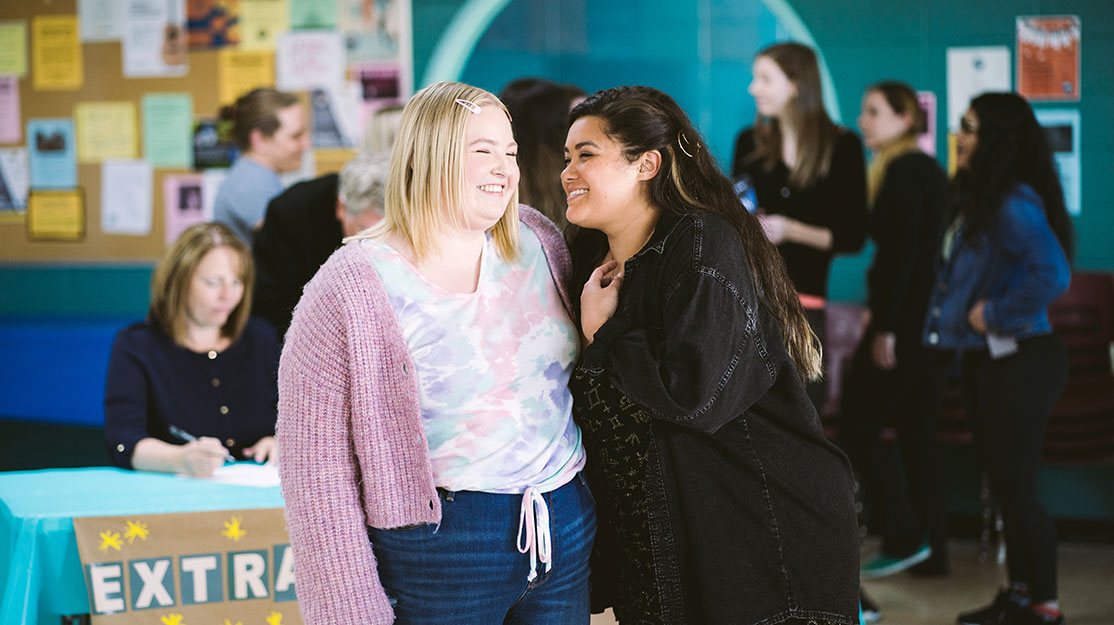 DQ goes to class with Astrid & Lilly Save the World stars Jana Morrison and Samantha Aucoin to learn about about their roles in the high school-set supernatural drama, chemistry tests and the power of positive representation.

As the poster tag line suggests, they’re the heroes you didn’t know you needed. In Astrid & Lilly Save the World, outcast BFFs Astrid (Jana Morrison) and Lilly (Samantha Aucoin) find there are monsters much more literal than those making mean jokes about them in the corridors of their school.

When they accidentally open a portal to a terrifying, quirky dimension, they must vanquish a host of creepy creatures and save the world while navigating their way through high school, which just became a lot more complicated.

Launching in the US on Syfy earlier this year, the series has won a cult following from fans drawn to its mash-up of high-school drama and creature features and the close bond shared by the title characters.

Here, Morrison (Zoey’s Extraordinary Playlist) and Aucoin, who makes her TV debut in Astrid & Lilly, speak to DQ about their starring roles, how they auditioned and did chemistry reads together over Zoom and how the series is driving positive representation on television.

What has been your reaction to how the series has been received?
Aucoin: The reaction has been so amazing. I’m getting direct messages on Instagram from a bunch of different people from all over the place, which has been really amazing. I’m just so proud of the show and I’m really hoping for season two. Fingers crossed! But it’s been really incredible to read the fans’ reactions and the reviews.

Morrison: The reactions we’ve been getting are more than I expected. I was excited for all the representation of it all. But I think the LGBTQ representation, the people of colour representation and diverseness of representation… people see themselves in this show and that’s what we’re doing it for. We’re doing it for the young people and the older people who have not had this kind of show before. I’m happy with how it’s being received in the world and I feel like it’s almost got Buffy [the Vampire Slayer] status.

The show is knowingly set in a post-Buffy the Vampire Slayer world – Astrid and Lilly’s monster mentor Brutus describes himself as “your Giles, in terms you humans might understand” with a nod to the Vampire Slayer’s own mentor. How does it compare to Buffy?
Aucoin: The show definitely is not Buffy. It is just an homage to it and to so many different references, which we all really love and grew up with. It stands on its own because of the plus-size representation, us being women as heroes and the fact that it’s different.

How would you describe Astrid and Lilly?
Aucoin: Lilly is a very sweet-natured person. She is a hopeless romantic. She wears her heart on her sleeve and, from the beginning, she’s very insecure in her skin. She really relies on her best friend for that confidence boost, so we get to see a really nice character arc throughout the season where she grows and she gets more confident. In that sense, we were able to develop the characters as the season was going, but we did have a really strong sense of who they were before we started.

How did you land the parts?
Morrison: I auditioned for the show and, as actors do, I just moved on. But then my agent called me and said, ‘Yes, you got a call-back.’ I did a few chemistry reads with some Lillys – Samantha was not a part of that group yet – and then finally, in June 2021 on my mum’s birthday, my agent told me I got the role. It was one of the best days of my life. And then we had to find Lilly.

Aucoin: My audition process was kind of wild. In the pandemic, I was working in childcare. I had just switched agents and I had never done any TV acting before. My new agent encouraged me to start auditioning for TV things and got me this initial audition for Astrid & Lilly as Lilly. When they couldn’t find their Lilly, they sent out this mass casting call and my agent gave me the character breakdown. I read it and I absolutely fell in love with the character, because Lilly struggles with a lot of the same things I struggled with when I was in high school.
I really resonated with her and I loved the friendship between Astrid and Lilly. I thought it was so incredibly refreshing to read about two lead women who aren’t pitted against each other, who aren’t fighting over a boy. They are there to uplift each other and are basically each other’s rocks, so that hooked me from the start.

What was it like doing a chemistry test together over Zoom?
Aucoin: It was wild not having met Jana before. As soon as we started, I was genuinely so amused by her and I remember the showrunners afterwards saying they really loved that we were genuinely getting a kick out of each other. It was a really foreign way of doing things, having a chemistry read over Zoom, but I remember having the feeling that this person is someone I would love to work with.
Some of the scenes we had to do over Zoom were physical comedy scenes from the first episode – there’s this ritual scene where we had to dance around, and we did it all over Zoom. It was a really fun process and we got so much positive feedback. We also did lots of improv because Jana loves improv, which I was not prepared for. It was so funny.

Morrison: This was my first chemistry read besides those with the other Lillys, who I guess I did not have chemistry with! Thankfully, I was cast but I still needed to impress. It was actually Samantha and three other girls I had to read with that day – Samantha was the first one and she knocked it out of the park. It’s an intense situation, but all we have to do is be ourselves. We did our crazy scenes and we just had such a good time. We had a blast with each other and it was the most fun audition I’ve ever done.

How did you work with the showrunners, Noelle and Betsy?
Morrison: We would always talk about character stuff. They would ask, ‘Hey, do you think your character would say this?’ or ‘What do you think your character’s pronouns are?’ and things like that. I can speak for Samantha when I say both of us put ourselves in these roles and we used our experiences in high school, in everyday life and our bullying dramas in our characters. Every day we would change and grow, and now I’m excited to see where the girls are.

The series blends horror and supernatural genres with a high-school setting. How do you think it stands apart from other teen series?
Morrison: It’s different from other shows because of the fact we have normal-body people on the show, you know? We want to neutralise all bodies and we don’t need to say plus size or skinny – it doesn’t matter. It also differs because we’ve got monsters to deal with, monsters who are personified manifestations of our insecurities and our fears. In high school, I would only want to deal with bullies and grades.

Aucoin: When you first take a look at the show, you’ll see the typical stereotypical mean girl, the stereotypical jock and the goth guy and the nerds. You might think they’re two-dimensional characters. But as the season grows, what really differs from other high-school shows is we take those tropes and we add layers to them, and in each character you find these really beautiful backstories and we discover reasons to why they are the way they are. I love that we take these stereotypes and we totally flip them on their heads.
We also have two protagonists you wouldn’t normally see as the protagonists in a show; we have the cool guy who actually isn’t that cool. I love how the writers and the showrunners did that throughout the season.

What can you tell us about how Astrid and Lilly’s friendship changes across the season?
Morrison: In the beginning, you can tell their friendship is so strong – they know each other’s likes and they like weird things together. As the season continues, some people may want to hang out with other people, and one may be jealous of that. And sometimes friends do get jealous of other friends. That’s a really big hurdle for Astrid and Lilly. By the end, the girls have grown and they realise that it’s better for the other person to just be happy, like best friends just want each other to be happy.

Aucoin: They’re at that place in the beginning where they are very dependent on each other. Maybe they’re a little too dependent on each other and they’re each other’s security blanket. All the things they have to go through this season really push them and help them with their independence, which is something everyone goes through. We have to take that jump and hope for the best. I do think they come out stronger and the relationship is much more solid by the end.

What was it like filming scenes where Astrid and Lilly take on monsters?
Aucoin: There were lots of practical effects. We used the green screen maybe twice during the whole shoot. It was really insane getting to actually fight these monsters. Our stunt coordinator, Glenn Redmond, would rehearse all these combat scenes with us, which were really fun. It was great with the practical effects; it made it easier. We didn’t have to use our imaginations too much. We had the monsters in prosthetics that would take the actors sometimes seven to 10 hours to put on. It was crazy.

Morrison: I’m really thankful for the effects team and all the prosthetics because it made it feel more real. Sometimes as an actor, it’s a little bit hard to imagine a monster coming at you. What would that actually feel like? So having the monsters there attacking us made it feel very real, and most of them are really scary. It was nice to see that artistry on set. It excites a lot of people. We had a lot of goo on us for the most part – that was very real!