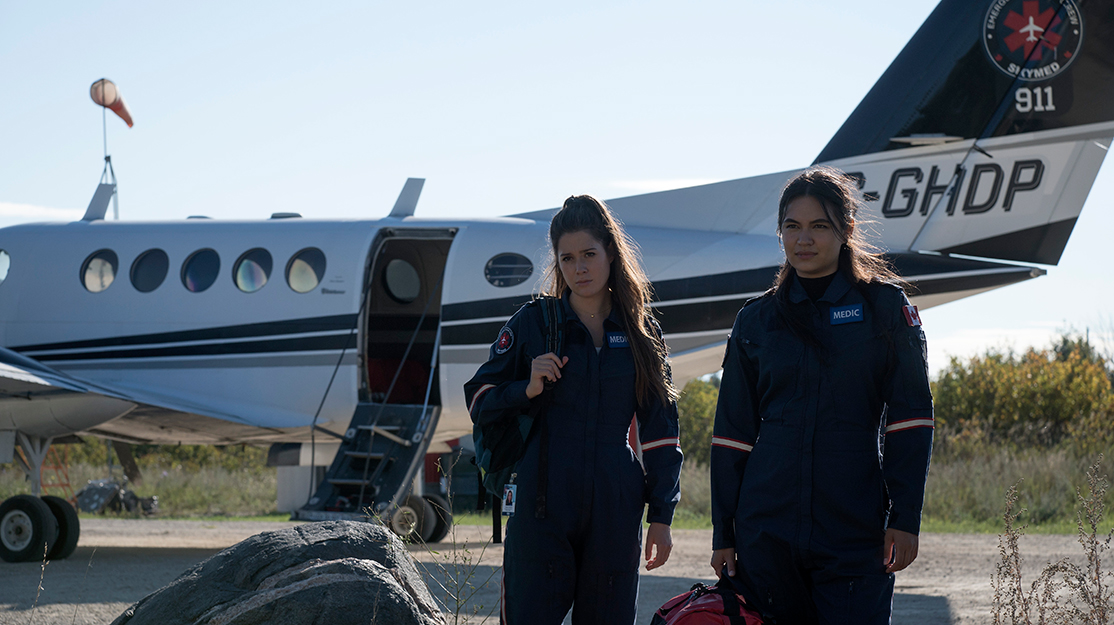 SkyMed showrunner Julie Puckrin reveals the family connection behind this series about a group of medics serving isolated communities in Northern Canada, its themes of identity and the secret star of the show.

Coming from a family of medics, and with a degree in human biology of her own, it’s no wonder writer and producer Julie Puckrin has worked on shows such as Nurses and Transplant. And now her latest project takes the medical drama genre to new heights with a series based on particularly personal story.

Dealing with life and death at 20,000 feet, SkyMed follows the young nurses and pilots flying air ambulances in the far reaches of Northern Canada, where help can often be thousands of miles away. Over the course of the first season, the show weaves a web of stories around this ensemble of first responders as they each face unique challenges in their private and professional lives.

Airing on CBC in Canada and streamer Paramount+ in the US, the series is inspired by the real-life experiences of Puckrin’s sister and brother-in-law, who met flying air ambulances in Northern Canada. Both have acted as consultants on the show, reading scripts from an early stage and visiting the set. Puckrin’s brother-in-law was also the SkyMed aviation consultant and led a boot camp to teach the cast how to look like real pilots.

“When you’re young, you don’t necessarily know that writing for film and TV is a job that anybody actually has, so I did that degree and then I wound up writing on Nurses and on Transplant,” Puckrin tells DQ via via Zoom from her sister’s home near Toronto. Her father is a doctor, her mother is a nurse, and when her sister became an air ambulance nurse, she met her future husband behind the controls of a plane.

On board the air ambulance, the medics have to use their wits and the plane’s limited resources to look after patients until more help arrives back on the ground. But when they’re not working, “they’re partying, they’re dating, they’re getting into a crazy drama. My sister and brother-in-law are certainly not the only couple that came out of that environment,” Puckrin says. “They all had lots of really interesting interpersonal drama. It’s this intense crucible of both professional growth and personal growth that really shaped a lot of them and made them the adults they would become.”

The writer, whose other credits include Killjoys and Motive, always imagined this world to be the perfect setting for a TV drama – and Paramount+ and CBC agreed. Paramount and distributor Paramount Global Distribution bought the show off-script before CBC came on board, having originally passed on the show after commissioning a pilot script.

There were two specific themes Puckrin wanted to address in the series – the effect living in a remote place has on a person and the idea of protecting your own – and she squares up to them immediately in the pilot.

“The show was always very much about the idea of young people growing up in extreme circumstances and finding family in extreme circumstances,” she explains. “The simple explanation is I wanted to make a ‘kissing show’ with airplanes and emergencies, because what I’m always most interested in, whether it’s like a Second World War drama, a space show or a medical show, is the character stories.”

Puckrin also knew she wanted to create an ensemble show, with characters arriving and leaving alongside the various patients who are treated in each episode. “The world is perfect to explore personal growth, relationships and found family and what that looks like for all these different characters,” she adds. “The character appeal is always the thing that pulls me into any story, and if I can have airplanes and explosions and gory stuff happening then I’m really happy.”

Another key theme is identity. One character, Bodie (Ace Nadjiwon), is coming to terms with his Afro-Indigenous background, with it later being revealed that his mother comes from a Northern community and that he was adopted by a white family.

Krystal (Morgan Holmstrom), a nurse, discovers her old flame is a smuggler, leading to questions about what it means to live in a remote community and how you access supplies, goods and other items from the ‘outside world.’

Hayley (Natasha Calis), the character most inspired by Puckrin’s sister, is struggling with a medical diagnosis she’s not ready to face. “So for all of them, it’s a lot of wrestling with themes of identity and who they are and who they’re growing up to become,” the first-time showrunner says. “The great thing is that the patient stories they interact with are always a good way to shine a spotlight on what they’re feeling and experiencing and struggling with.”

Throughout development, Puckrin was clear that the perspective of the show should be that of the pilots and nurses, who all come from different parts of Canada to work together. As a result, she populated her writers room with a diverse group of people who could speak to the different viewpoints of the characters in the show, such as those from Indigenous communities and those who grew up in the North.

SkyMed also employed a committee of consultants to review all the scripts, which feature Indigenous languages such as Nêhiyawêwin (Cree) and Anishinaabemowin (Ojibway), and get involved in production.

“It was important to us when we were casting Indigenous actors that we tried to cast actors who were playing their own nations, to make sure we were meaningfully casting those parts,” Puckrin says. “But really it started at the story stage by having Indigenous voices in the room who could speak to the experience of being Indigenous, and also to the experience of being from a remote Northern community. We always encouraged a lot of discussion and communication to make sure these were all stories we felt were respectful and accurate.”

As well featuring the stories of individual characters, each episode also has four or five medical cases, with the pilots and nurses racing against time to locate the medical emergencies and get them safely to hospital.

“For the most part, their job really is to get them there alive and then hand them off,” Puckrin says. “For us as writers, the challenge then was why do we care about this patient? How do we make that patient’s story feel satisfying in that it’s actually about the nurses or pilots’ journey? That was a fun challenge and it opened doors for us in terms of structure and format to really play with a lot on the show. It’s not quite as rigid as a regular medical drama.”

Another part of the show is dramatising the real limitations of this health service, with lines in the opening episode about making do with the few resources available to medics on the plane. Puckrin says the service is one that needs more support and is an example of how communities in isolated environments are reliant on planes for goods and services.

“It’s a complex thing and it’s a uniquely Canadian thing, so the show certainly does try to explore that from the perspective of the people in the planes, while also trying to represent what it feels like for the patients to be in that situation,” she says.

Juggling the number of regular characters, guest characters and medical cases was “a lot. It was ambitious,” the showrunner continues. “But for me, the most important thing was always coming from a place of character and emotion. We had very clear journeys for each of those characters. Then as we were going through the episodes, the discussion always started from, ‘Where are all of our characters right now? What emotional story do we need to tell for them?’

“I often describe this show saying it’s like all whipped cream, no pie crust. It’s like all the fun, exciting stuff. It’s the explosions, it’s the drama, it’s the medicine. And we don’t have to do a lot of the shoe leather that some of the other medical shows that are restricted to a hospital typically have to do. We get to drop in at the most dramatic and exciting moment – and then leave. We get away with that as long as it’s motivated by the characters.”

Filming the series on location in Manitoba and Ontario during fall and winter of 2021/22 presented some unique challenges in an environment that can shift from 40°C
in the summer to winter extremes of -35°C.

If a scene called for something to happen in a swamp, the cast and crew would actually go to a swamp. Similarly, if there was a night scene, they would be out filming at 3am.

Meanwhile, with planes being integral to the drama, Puckrin says the aviation elements were what made her most nervous about filming the series. Her fears turned out to be unfounded, however, as the process ended up being quite straightforward.

“We just had several versions of the plane,” she says of the King Air 200s that are other star of the show. “There was a real operating plane that we would film. Some days we also had what we called the dummy plane, which was hollowed out with removable wings. We could just pop that on the back of a truck.

“Then we had our studio plane, where we built the inside of the plane 8% bigger and put it on a gimble, so any time we were inside the plane, we literally had grips making it rock and shake, and we had people blowing rain at it and stuff happening in the background with giant lights moving to indicate the sun moving.”

Launching in Canada on CBC and streamer CBC Gem on July 10, the series will debut simultaneously in the US on Paramount+, which will subsequently make it available around the world.

Puckrin’s goal was to create a “sexy, fun, exciting show” with as much realism as possible. “I want viewers to watch the show and be like, ‘Yeah, let’s jump in a plane and save lives.’ That’s what I want, I want audience to feel like, ‘Man, I want to go do that with them. I want to go on that adventure with them.’ I hope we managed to create that feeling. I hope we make it feel like an exciting adventure that people want to go on.”

Above all else, SkyMed is dedicated to her family members who inspired the series. Puckrin’s sister is now working as a labour nurse, while her brother-in-law is flying planes for a commercial airline.

“They’ve seen it the whole way. It’s really been a family affair, which has also been amazing because, up until now, they’ve only been interested in what I do for a living, but now they feel invested in it. It’s basically a love letter to them, so I hope they feel proud of it.”