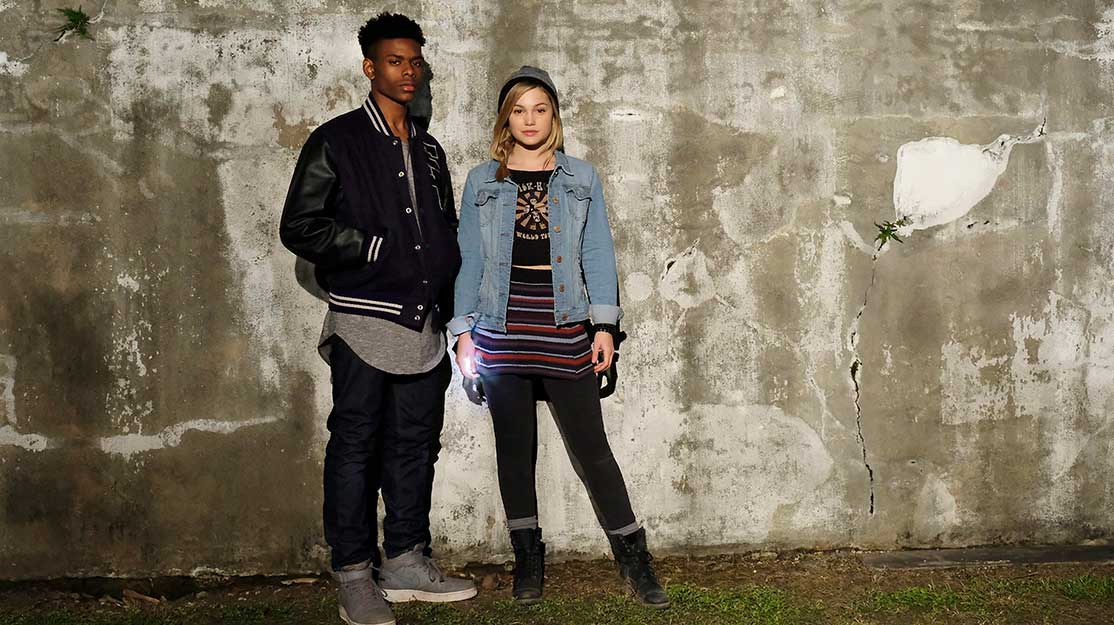 While Marvel’s big-screen ambitions have left nothing on the floor in terms of scale, ambition and epic action sequences, the same cannot be said for its television offerings. The likes of Daredevil and The Punisher may live in the same ‘universe’ as movie characters such as Iron Man, Captain America, Black Panther and Thor, but there’s a stark contrast between them on screen.

In particular, TV series such as Agents of S.H.I.E.L.D. on ABC and Netflix foursome Daredevil, Jessica Jones, Luke Cage and Iron Fist – as well as crossover series The Defenders, which brings the four titular characters together – offer an altogether darker, grittier and more grounded tone.

One of the most recent entries into Marvel’s television canon is Cloak & Dagger, commissioned by US cable channel Freeform and available on Amazon Prime Video across Europe. It tells the story of Tandy Bowen (‘Dagger,’ played by Olivia Holt) and Tyrone Johnson (‘Cloak,’ played by Aubrey Joseph), two teenagers from very different backgrounds who find themselves burdened by and awakened to newly discovered superpowers that link them together. One can emit light while the other can shroud people in darkness.

The series is based on the beloved comic characters and is coproduced byMarvel Television and ABC Signature Studios. It is distributed by Disney Media Distribution.

Here, Holt and Johnson talk about how they were drawn into the world of the original comic books, their on-screen partnership and some of the issues the teenage characters face in the series, which has been renewed for a second season.

How much did you know about Tandy and Tyrone before starting the show?
Holt: We were not familiar with the comics whatsoever. We did a little bit of research going into it and I ended up bringing the first comic book to the audition just to understand the characters and the tone and their journey. Then when we got the parts, we dove into the comics a little bit more.

How do you feel the show fits into the larger world of the Marvel universe?
Holt: We’re a very progressive show and we’re taking a current-day twist on what’s happening in society right now. I think that’s unique and rare and something we don’t see a lot of in television, or certainly not in shows that are based on superheroes. As far as the larger scale of the Marvel universe goes, it’s important for us to finally tell a story about an interracial duo team and how they’re better together than they are apart. For Marvel fans, it’s about bringing a new generation of superheroes on board and telling their stories in an authentic way.
Johnson: Also, a lot of superhero duos are the hero and his sidekick, but Tyrone and Tandy are on a level playing field and they need each other. I love how the show stresses who they are as people away from their superpowers.

Did you know from the start that you had such great chemistry?
Holt: We did chemistry tests with a lot of different actors but the minute we were in the room together it just felt right. We actually did an improvisation scene where we sat down and basically talked about both of our backgrounds and stories. By the end of it we were in tears. It felt good and we left the room feeling confident that, whether we booked the parts or not, nobody could ever take that moment away from us.

In the first two episodes, you only have one scene together – was it hard to get the chemistry going again?
Holt: No because that’s the scene we did at the audition and so we’d done it a lot. But our director, Gina Prince-Bythewood, who directed that first episode and who we just worship and love, really helped us get to an authentic place. And while it’s true we have very few scenes together in the first few episodes, when it comes to episode four we really start to develop a dynamic and a friendship.
Johnson: You get to know Tyrone and Tandy for who they are respectively, as individuals, and you’re rooting for them, so when they finally get together it’s like, ‘This is heaven.’ And I do feel the fans are in love with the chemistry that Tyrone and Tandy have. I think it’s worth the wait.

What are you most enjoying about playing these characters?
Johnson: One of the best things about Tyrone is how much he shares with Tandy. He’s an introvert, which I’m definitely not – and actually that was a challenge for me at first, but I love a challenge. Being able to portray that introverted side of him and to see how much Tandy changes him is great. Throughout the season you really watch them grow, not into two completely different people, but you really see them grow up.

Do you think teenagers today are switched on to what’s happening in society?
Johnson: I think this generation is so aware and so, I guess they say, ‘woke.’ They’re already talking about these things and I think this is going to push it to another level where we see that if we connect and if we talk, we’ll progress more than if we separate ourselves. Moving with hate isn’t going to take us anywhere, so I feel connecting with young people is going to achieve a lot because television and film are two of the biggest outlets in the world.
Holt: Our goal is to start an open dialogue and to make society aware of what’s happening in this day and age – what it’s like to be a female in America and a young black male in America. It has a lot of heavy material and a lot of layers and a lot of really hard topics to talk about like police brutality, addiction and sexual assault. The aim is to show it in a very raw, authentic way. Of course, we want to make a fun show that’s entertaining and has a bit of wit. We don’t want it to be dark and heavy all the time, but I think it’s important to address bigger issues.

What’s the coolest thing you’ve done on the show so far?
Holt: We got to do most of our own stunts, which is pretty cool. We definitely got our steps in and there were a lot of bruises and a lot of sore muscles towards the end of the season, but all for good reasons. To be able to actually go and do what your character is doing is really fun; to feel that adrenaline and that rush, then go into the scene afterwards with that feeling is pretty epic. There’s nothing quite like it.
Johnson: The days where we did stunts made it feel a lot more real, like, ‘Wow, I guess we are superheroes!’