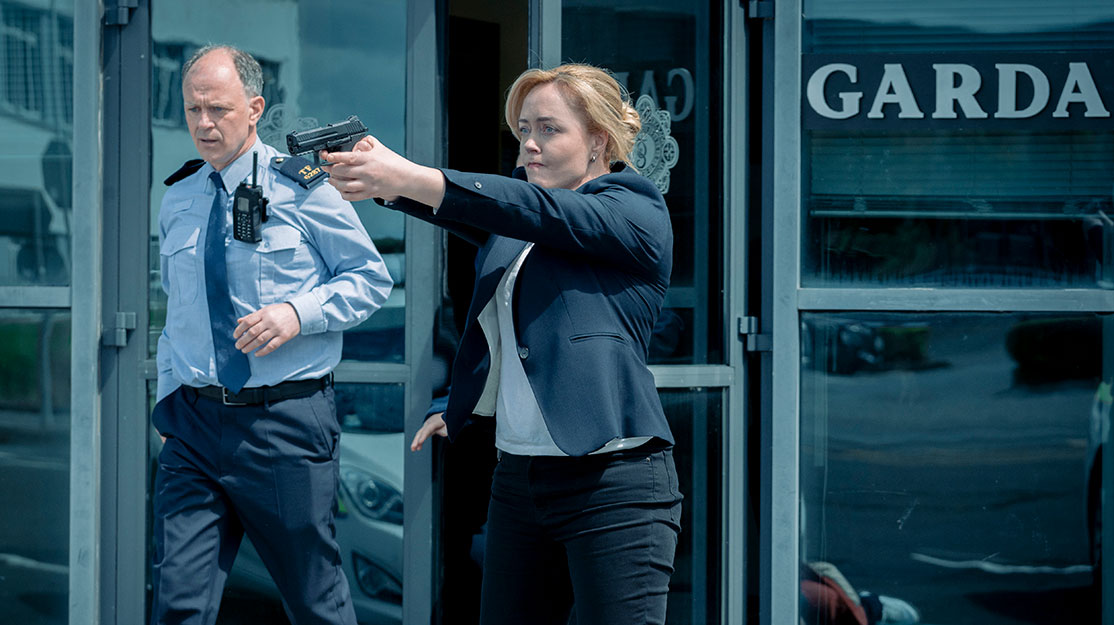 Hidden Assets star Angeline Ball discusses her leading role in this crime drama set between Ireland and Belgium and reveals how she uses Pinterest to create the world of the characters she plays.

Across a 30-year acting career, Irish star Angeline Ball has appeared in series including Keeping Faith, Doc Martin and Shameless, following her breakout role in 1991 feature The Commitments.

So it’s surprising to learn that her turn in crime drama Hidden Assets marks the first time she has played the lead in a TV series.

Ball stars as Emer Berry, a detective in the Irish Criminal Assets Burean (CAB) who discovers a small-time drug dealer has been receiving substantial funding from a seemingly untraceable source – not in cash but in rough diamonds.

When these diamonds are linked to a series of bombings in Antwerp, Belgium, Emer finds herself working with Belgian police commissioner Christian De Jong (Wouter Hendrickx). Together, they uncover a political conspiracy that pits them against the Brannigans, a wealthy Irish dynasty with ties to Antwerp.

Blending crime drama, political conspiracy and thriller, Hidden Assets sees Ball reprise her supporting role from 2017 series Acceptable Risk. Hidden Assets first aired on Ireland’s RTÉ in November last year and then launched on BBC Four in the UK in January following a deal with distributor DCD Rights. It will also air as an Acorn TV original in the US.

“I’ve just taken the lead for [Netflix feature] Deadly Cuts but I always feel with film that you have a little bit more time to do it,” Ball tells DQ about being number one on the call sheet. “In television, I don’t know whether it’s because they demand so many scenes per day, but when you’re up against it, when you’re in a pandemic, it felt very pressurised. I certainly had my work cut out for me in the sense that we weren’t shooting in sequence as well. I really needed to know where I was in the story.

“But it’s always a good thing when your most recent job is your most challenging to date, because that means you’re growing as an actor, you’re still relevant or you’re still doing good work.”

As for reprising the role of Emer, “I had visited her before so I just thought about how she had progressed [since then],” she says. “Once I heard that we were going to film it at the end of March last year, I started to really put my thoughts on the character, but I found it wonderfully challenging.”

Ball doesn’t like to consider herself as ‘the lead,’ preferring to see herself as just one of the ensemble cast and the wider crew, “from the person who picks you up in the morning to the person who switches the lights off at the studio at night.”

But on a show that is split between Ireland and Belgium, with different cast and crew members in each location, “I felt I really needed to be on the money,” she says. “You can’t be too focused and set in your ways as an actor. For instance, Wouter has a very different way of working, we had a different director in Belgium and a Belgian crew, so you’ve got to be malleable. You’ve got to be able to go with the flow.”

Filming initially took place on location in and around Antwerp, before the six-part series – produced by Ireland’s Saffron Moon, Canada’s Facet4Media and Belgium’s Potemkino – moved to the west of Ireland. During pre-production, emails, WhatsApp messages and pictures would be exchanged between different members of the crew, while lead director Thaddeus O’Sullivan collaborated with Belgian director Kadir Balci.

“The Irish shoot was right at the end of the project and it was interesting because then it was a whole different crew,” Ball says. “What I liked about it is that is you can see the kind of deliberate mismatch when Emer is in Ireland compared to when she’s in Wouter’s high-tech office in Belgium.

“Thaddeus did episodes one, two and three, but he left pretty early on in the shoot in Belgium. He did shoot some of the scenes, but he had to prep for Ireland. Then Kadir would take on the role, shooting some of the scenes that were in Thaddeus’s episodes, so they definitely had this kind of duality together. It was the same for the DOPs. We also had amazing writers, Peter McKenna [Kin] and Morna Regan. They really had to get their heads together on the story and the overall arc.”

That duality in front of and behind the camera leads Ball to compare Hidden Assets to the best examples of Scandinavian noir, in particular Bron/Broen (The Bridge), while she also found a way to pay tribute to French thriller Engrenages (Spiral).

“I remember when Spiral first came up. My partner’s French, and I remember watching it before it became a thing. His sister had said, ‘Oh, watch this’ many years ago, and I love all of that. In a way, forming the character of Emer with that not-too-dark look with the messy ponytail was my little ode to Spiral.”

However, Hidden Assets doesn’t shed too much light on Emer’s own backstory, her home life or her sexuality. Instead, Ball created a backstory of her own.

“Maybe if there’s a season two or three you might get a piece of that,” she jokes. “It’s just something I keep in my head. Even the writers don’t really know that, but I know her quest is to get to the truth and get to the bad guys. She has this kind of unwavering energy where she just puts everything into getting the end result, and I liked the fact that you don’t really get to see what she does at home. That wasn’t part of her story. I just felt I could trust Peter and Morna.”

Ball also enjoyed the fact that a lot of the characterisation in Hidden Assets could be found in the words unspoken and the pauses between lines, in a series that swaps backstory for a greater focus on the subjects at the heart of the series, namely corporate politics and corruption.

“What’s interesting is it’s the guys on the ground who take the bullet or take the hit and these other guys in the gilded castles can get away with it,” she says. “I thought that was really great, and I loved the fact that Emer’s not afraid to get her hands dirty. She’s one of the guys, but she’s not a pushover and she does have a sense of humour.”

It’s Emer’s investigation of a local criminal that leads her to uncover some diamonds and a link to Antwerp, where a series of bombings have put local police on high alert. When she then makes the short journey to Belgium, she and Christian form a partnership together as they find both of their cases are interlinked.

Naturally, their relationship has its ups and downs as they both wind each other up, particularly when Christian describes Emer as “just an accountant.”

“There’s that kind of bond and play between the two of them, which is nice,” the actor says. “There was one point where some people in the mix were saying, ‘Oh, we want a kiss’ or ‘we want a relationship,’ and I think it’s nice that it’s less like that.”

To prepare for her role, Ball spoke with an ex-CAB employee and discussed the various roles people have at the agency. It was set up in 1996, following the murders of Detective Garda Jerry McCabe and journalist Veronica Guerin, with a brief to tackle criminal activity by seizing assets gained through crimes such as drug trafficking, theft, fraud and money laundering.

“I had done some research before on Emer, when she was in the police,” the actor says. “It was just a question of how she would have migrated from there to here, even in terms of what they owe, what they earn per year, what kind of car would she drive and what kind of clothes she would buy.”

Those considerations all help her build a picture of the character, which she creates using images of clothes, hairstyles and jewellery she collects on picture-sharing site Pinterest. “That started me on my journey for the character, and then I also obviously have chats with the director, the writers and the make-up and hair designers.”

After three decades working in the industry, Ball also feels she has won the opportunity to contribute to the development of the characters she plays. “I really do feel that I’ve earned my stripes,” she says. “I’ve been in this industry a long time and initially when you go into these jobs, you get given what you’re given and you’ve got to stand where you’re told to stand. Now I like to think that it’s a kind of co-relationship, and a lot of the time the designers are very keen to hear your point of view because you’re bringing the character to them. They might not have thought of something and they go, ‘That’s a great idea.’ A good designer will do that.”

Ball also believes it’s a good time for female characters on screen, where they are not simply seen as “sexual commodities” in movies and television series. Similarly, she believes more opportunities are opening up for older women in roles where a younger actor might once have been cast.

“It is not really all about image or youth anymore, thankfully. It still has a long way to go but it is changing,” she says. “Attitudes are changing. It’s more interesting for me and for the audience to be brave enough to show yourself warts and all. That’s what people want now. Gone are the days when you could really patronise an audience. Even with reality TV, people are hooked on it, and if you’re giving them a show that doesn’t look close to reality, they won’t want to watch it.”