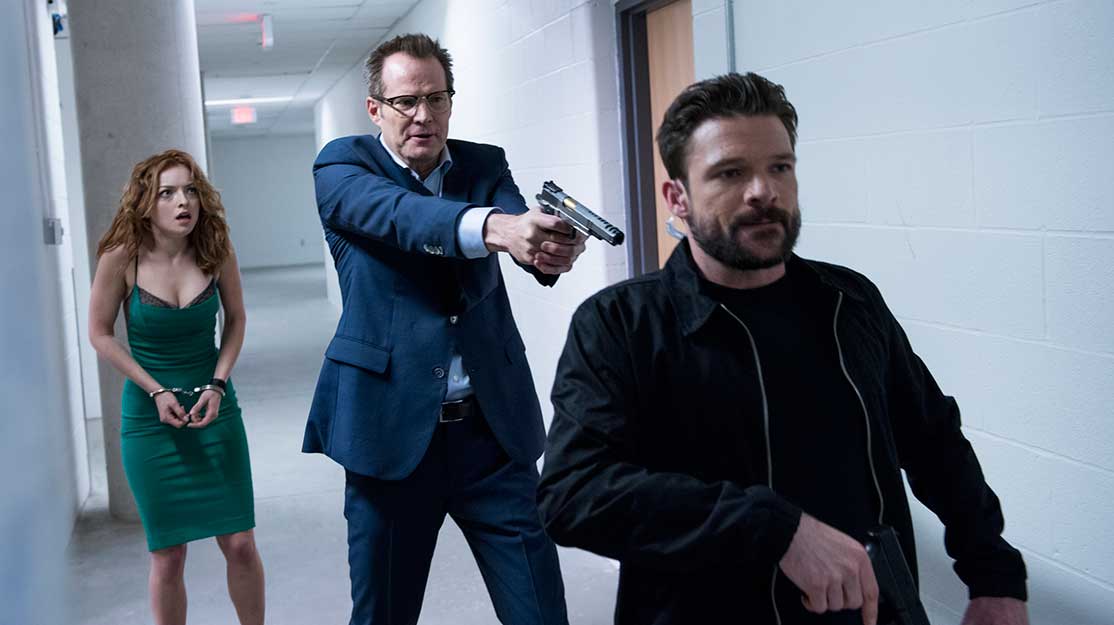 Heroes creator Tim Kring tells Michael Pickard why he hopes Heroes Reborn is winning back fans of the original series, and why television is now ready for horror pilot The Wilding.

When Heroes first arrived on NBC in 2006, the comic book-inspired drama was praised for its imagination, creativity and ambition by bringing a new group of superheroes to television.

The series introduced a group of ‘regular’ people who discovered they had powers and followed them as they learned how to use them in their everyday lives. Then over the course of season one, they came together to halt the destruction of the planet.

However, after a hugely celebrated first season, the following three runs were hit by negative reviews and dwindling audiences as the show was accused of losing focus.

Now back on screen after a five-year hiatus, under the name Heroes Reborn, the series is looking to reconnect with fans over the course of a tightly plotted 13-episode story arc — almost half the number of episodes that aired in each of its first four seasons.

Creator Tim Kring says he is delighted with the reception the new season has had, particularly among the “real fans” and on social media. But he explains that bringing Heroes back to the screen was both a risk and a challenge.

“The real balancing act was trying to figure out the balance of old and new,” he says. “It’s very difficult to come back with a lot of the same characters and try to capture the continuation of what we had. We’re shooting in a different city, we’re using different locations, the actors are five years older, so what do you do about that? And many of the actors are obligated to other networks and other projects, so who to bring back and who not to bring back becomes really complicated and then, to be honest, you just don’t want to be comparing apples to apples.

“I’ve always felt the brand was elastic. The premise is so broad – an indeterminate number of people around the world who are waking up to the fact they have these extraordinary abilities and then have to find each other in some unique way and save the world – and over the four seasons of the original series, we created dozens of characters, so it has proven to be a fertile ground for creating characters.

“By coming back with a 13-episode, standalone event series, our hope is to earn our way back in with the fans by making them aware that there’s a beginning, a middle and an end to this particular story.”

So did Kring feel as though he needed to win back viewers? The seasoned TV executive, whose other credits include Touch and Dig, says Heroes couldn’t hold its weight under the demand of network television’s traditional 23-episode seasons.

“When it came out of the gate, Heroes was very shiny and very new, but it’s hard to stay shiny and new,” he says. “Part of that is because our first season of 23 episodes took us more than 14 months to produce and we had to be on again the next year, so we were facing a mathematical impossibility in sustaining that size and scale.

“The order for the second season was 26 episodes and for the third it was 25. So what happened was that when something that felt like an event, like it was rare and unique, was on all the time, it lost its uniqueness and it was very hard to sustain that shiny new quality.”

But Kring now believes the increasingly popular limited-series model (with between 10 and 13 episodes), used by such shows as American Horror Story, 24: Live Another Day and Fargo, is better suited to the story Heroes Reborn is trying to tell.

He continues: “Creativity needs time and that’s why this 13-episode model is such an advantage. You don’t have that portion of the season that I would call ‘the art of the stall,’ where you’re too far down the road to be still introducing things but you’re not so far down the road that you can end it. Thirteen episodes means we can do some very aggressive storytelling where we cram 50lbs of story into a 10lb bag. And every episode becomes really packed with twists and turns and makes for an exhilarating kind of ride. We could have really benefited from being a little more rare and a little more scarce (with the original Heroes).”

So, under a new production model and with a broad basis for countless stories, will Heroes Reborn be back for another run in 2016?

“With a premise about ordinary people who discover they’re extraordinary and must find each other to save the world, there’s always ways to create the antagonist or event that needs stopping, and the world always needs saving,” Kring says. “The idea is we’ll leave a tiny door open for more story but what’s really great is we also have this intervening five years of time between the last series and this series. It becomes very fertile ground for us for the mythology of the show.

“A lot has happened with the characters from the original series and a lot has happened for the new ones in those five years to get them to where they are now, which is very interesting for the audience. It could be a show that not only goes forward from here but also goes back and explores some of that territory.”

Another factor that marked Heroes out during its initial run was its willingness to embrace other forms of storytelling. Novels, comic books and particularly web series helped to carry the story online and in print beyond what was shown on television, making it one of the first series to roll out a multiplatform strategy.

“It had many purposes for us,” Kring says. “One – we had too much story to tell for the show so it could live wherever the audience was. Now our audience is living with mobile devices in their hands that they stare at for hours a day, so with Heroes Reborn, we’re launching two next-generation video games. One is a mobile tablet game and the other is a console game. We’re launching six ebooks using novellas about the characters, and we have a digital series called Dark Matters that takes you on a journey right up to the beginning of the series.

Of course, Heroes can also be seen as a precursor to the current boom in superhero dramas currently on air, with Peter Petrelli, Claire Bennet and Hiro Nakamura paving the way for live-action iterations of comic-book characters The Flash, Supergirl and Arrow.

Kring recalls: “At the time, we were one of the first to come out of the gate. But it was not a pure genre show. At its heart, it was a family drama, a melodrama, a thriller, a comedy. It had all sorts of tones to it and there was always a sleight-of-hand quality to the visual pizazz of the show – you thought you saw more superpowers than you did. We used it very judiciously, partly because it was hard to do and expensive on a weekly budget – but also because we never wanted it to be about the powers.

“The show was always about the people. I saw the powers as an affliction rather than something you embraced. And then there was the journey of discovery for the characters – embracing those powers, learning to live with them, existentially coming to grips with what it meant to have these powers. So the powers themselves were never that crucial to the storytelling; they were the second layer underneath it.”

For his next project, Kring is executive producing supernatural drama The Wilding, which has been picked up by cable channel USA Network as a two-hour film that will also serve as a pilot for a future series.

The story follows a group of disparate people from across North Carolina who realise they are connected by a haunting. Their only hope is a fractured family dealing with the consequences of a teenage pregnancy, addiction and the discovery that they belong to a subset of people with supersensory abilities called Wildings. Jordana Spiro has been signed up to play the lead character, Margaret Hayes, a psychiatrist whose daughter has been diagnosed with a delusional disorder – though the nature of her true condition makes her the one patient Margaret cannot save.

The script sent shivers through everyone who read it, including Kring, who believes now is the right time for a “truly scary” horror series on television.

“For years and years, writers and friends of mine in Hollywood have lamented how hard it was to pitch and produce something that was truly scary for television. It’s been something that’s really hard for television to get right. Nobody’s really captured this genre that people so love, but USA has really embraced it.”

The Wilding also represents the continuance of a period in television where ideas that wouldn’t have been pitched 10 years ago are now making it to series.

Kring adds: “It’s such an exciting time. You used to mark out the boundaries of what you could pitch and stories would end up in the vast middle because it needed to fit for everybody. Now, any pitch you have, it’s about where you go with it and finding the right fit for it. That’s the exciting thing about the times we’re living in right now. There’s so much content. And whether there’s too much, I don’t know. All I know is it’s a very exciting time to be a writer and creator in Hollywood.”