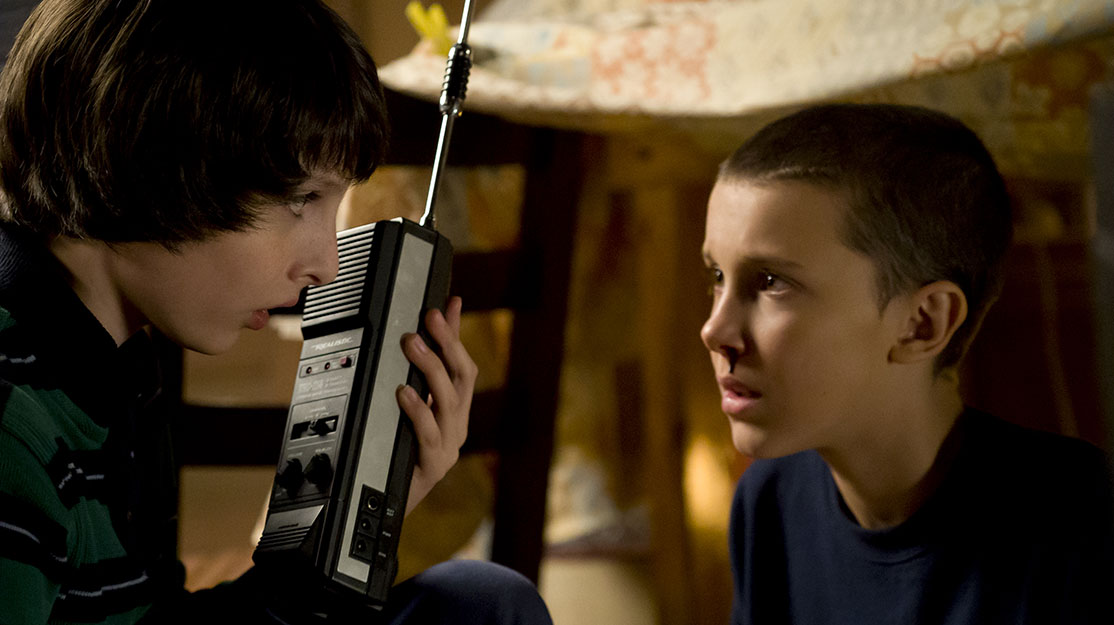 Netflix goes back to the ’80s with Stranger Things, a supernatural, small-screen homage to ET, Stand By Me and Halloween.

When it comes to the 1980s, there have been plenty of recent television dramas set during the iconic period best known for big hair, shoulder pads and power ballads.

From Cold War spy thriller The Americans and period tech piece Halt & Catch Fire to HBO drama Show Me A Hero and short-lived crime series Wicked City, the decade of Madonna and Michael Jackson has provided no end of inspiration to TV writers.

But rather than music or fashion, it is the big screen and the films of Steven Spielberg and John Carpenter that new Netflix series Stranger Things, which debuts today, uses as its inspiration.

Described as a love letter to 1980s classics, the eight-part series opens with the disappearance of a young boy. As friends, family and local police search for answers, they are drawn into a mystery involving top-secret government experiments, supernatural forces and one strange little girl.

“We have so much nostalgia and love for this era,” explains Matt Duffer, who wrote and directed the series with his brother Ross. “We really wanted to see something on television that was in the vein of the classic films we loved growing up, the Spielbergs, the John Carpenters, as well as the novels of Stephen King. And what makes all of these stories so great to us, and so resonant, is that they all explore that magical point where the ordinary meets the extraordinary.

“When we were growing up, we were just regular kids, living in the suburbs of North Carolina, playing Dungeons and Dragons with our nerdy friends. But when we watched these films and read these books, we felt transported. Suddenly our lives had the potential for adventure – maybe tomorrow we would find a treasure map in the attic, maybe my brother would vanish into the TV screen. We really want to capture that feeling with Stranger Things. We want to bring that feeling to people who grew up on those films, and we also want to bring it to a whole new generation.”

To sell the show to Netflix, the Duffers created a mock ‘trailer’ using clips from more than 25 feature films, including ET, Nightmare on Elm Street, Super 8 and Halloween. They also created a ‘look book,’ which was designed in the style of a vintage Stephen King novel.

Then, before starting the show, the writers all watched films including ET, Stand By Me, The Goonies, The Thing and A Nightmare on Elm Street.

“Television is becoming more and more cinematic, and we became excited by the potential of making a ‘longform movie,’” Matt explains. “And what better place to do that than Netflix? It was our dream home.”

Ross continues: “Working with Netflix has been an amazing experiencing. They have been incredibly supportive of our vision from the very beginning, and they’ve placed so much trust in us. We also just love Netflix as a platform, because it allows people to watch the show at their own pace. This story is not necessarily intended to be watched over eight weeks. The hope is that people will get hooked and the crescendo will feel even more impactful when it’s watched over a relatively short period of time. We want the audience to feel like they’re watching an epic summer movie.”

Beyond the storyline, the influence of Spielberg and his ’80s contemporaries is ever-present, particularly in the setting that was chosen for the series: the town of Hawkins, Indiana.

“There’s something Spielbergian Americana about Indiana,” executive producer Shawn Levy states. “Hawkins is a town with history, not only in its buildings and its land but, most importantly, among its characters.”

The show was filmed both on sound stages and on location in Atlanta and its suburbs, with the city providing the producers with the perfect setting to recreate the small-town look of Hawkins.

“Hawkins is an ordinary, idyllic little town filled with relatable, ordinary people and that makes it the perfect place for something supernatural to happen,” adds Ross.

As episode one plays out, what will also strike viewers beyond the setting is the attention to 1980s detail, from the costumes and synthesiser-heavy soundtrack to cultural references such as walkie talkies and playing Dungeons and Dragons.

“We never wanted it to be ‘in-your-face’ ’80s and obvious,” says production designer Chris Trujillo. “The lived-in look was important to us so that it would feel familiar to audiences and not distract them.”

Levy continues: “It is enjoyably nostalgic for those of us who remember the ’80s, but for a kid or a teenager for whom that is another era, it’s just a great story.”

The music, in particular, adds another layer of nostalgia to the series. The composers, Michael Stein and Kyle Dixon, were members of a synth band called Survive which the Duffers discovered after their work featured on the soundtrack of feature film The Guest.

In total, they wrote more than 13 hours of music for the series. Viewers will also hear tracks from artists such as Toto and Joy Division.

Heading the cast is Winona Ryder, best known for big-screen roles in Beetlejuice, Heathers and Edward Scissorhands and whose television credits include the aforementioned Show Me A Hero and BBC TV movie Turks & Caicos. In Stranger Things, she plays Joyce, a struggling single mother raising two boys.

“It’s a genre that I hadn’t explored before and was interesting to me,” she reveals. “I’m really lucky in my life that I’ve gotten to do a lot of different things and so it was exciting to try something new. I took a lot from performances like Ellen Burstyn in Alice Doesn’t Live Here Anymore and Marsha Mason in Max Dugan Returns and Audrey Rose.”

Matt says of Ryder: “Winona is completely fearless. She jumps in all the way, 100% and that’s what we needed for the Joyce character. She’s on her own for so much of the show, losing her grip on what is real as she goes through an emotional rollercoaster.”

As for the Duffers, Levy admits they “came out of nowhere” with the idea for a show and he believes they will become a new force in filmmaking.

“Stranger Things marks the arrival of a new vision, and a new filmmaking partnership and brotherhood that is really noteworthy,” he adds. “We’re going to be talking about the Duffer brothers the way we talked early on about the Coen brothers.”