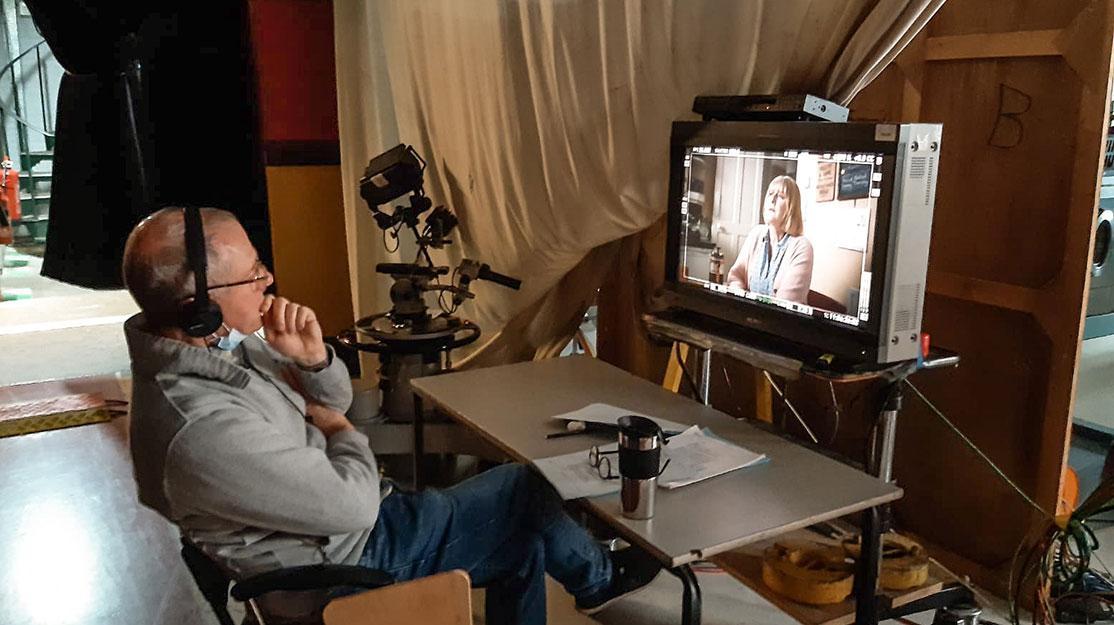 For more than 35 years, British soap EastEnders has been a firm fixture in the BBC schedules. However, the coronavirus pandemic forced the show to suspend production in March – and despite the Beeb subsequently airing fewer episodes per week, the series is now on a transmission break for the first time ever, with the most recent episode having aired last Tuesday.

Production is due to resume this week, but eagle-eyed viewers might find a way to return to Albert Square sooner than expected as two traditions of British television collide.

When Piers Wenger, the BBC’s director of drama, sought a way to produce new scripted television during the UK lockdown, he turned to Alan Bennett’s acclaimed monologue series Talking Heads, which first aired in 1988 and then in 1998. Now, 10 of the 12 stories featured in those original two seasons, plus two new scripts, have been produced under social-distancing guidelines on the empty sets at BBC Elstree Studios on the outskirts of north London, otherwise known as the home of EastEnders.

“It’s been a ridiculously fast turnaround,” admits producer Kevin Loader. “From the getting the first call from Piers to delivering them was just under 10 weeks. It’s pretty extraordinary, all things considered.

“He was saying he’d love to get them on [air] in June and this was the last weekend in March. It seemed an impossible idea. But we certainly went into that weekend thinking, ‘Yes, they could be done.’”

Loader and production designer Simon Bowles were working together not too far away at Leavesden Studios, home of the Harry Potter films, where they were preparing the second season of Armando Iannucci’s HBO comedy Avenue 5 but had to stand down when the studios were closed.

“One of the things that’s been impossible to do in lockdown is build sets. So the issue really was where the hell would we shoot them?” Loader says. “Piers said, ‘Look, EastEnders is off the air. I’m sure I can get BBC Studios Elstree to put the studios at your disposal.’

“The idea became to shoot it on the standing sets at Elstree. Without that, we probably would have had to give up straightaway. Then it was just about whether we could persuade 12 actors to do it with only a couple of weeks’ prep. From the minute they were called, the people who filmed first probably had four weeks to rehearse and learn it. Some of these monologues are over 40 minutes. That’s quite a lot.”

The iconic status of Bennett’s work – his scripts are even studied in schools – means Loader immediately told Wenger that if the writer agreed for them to be reproduced, they would have to be done so in their original running times and not cut down to fit a 30-minute timeslot.

“They had to be done word for word as classic texts, just as you would with Harold Pinter or a Samuel Beckett play, [which meant] they would come in a very odd lengths and be a scheduling nightmare,” says Loader, who produces the series with famed theatre producer Nicolas Hynter for London Theatre Company.

“To be fair, Piers and Charlotte [Moore, BBC director of content] were brilliant about that. It was in the very early weeks of the lockdown and it suddenly seemed a rather resonant thing to be doing to have these very, very concentrated, intimate texts where an actor portrays a character who’s making a confession to you of some kind, or at least trying to describe a little window in their lives at that moment.”

Bowles’ thoughts of spending time at home with his family during the lockdown quickly evaporated when he got the call from Loader. He immediately drove to BBC Elstree and enjoyed a tour of the EastEnders set with art director India Smith. Realising it might be the only time he would be on set before filming began, he had to quickly decide which backdrops would be used for each monologue and what props would be needed for each scene.

“We ended up choosing 34 different rooms from the whole world of EastEnders and went from there,” he says. “Then we had to dress these sets to be character-specific. There was a concern we would recognise the sets from EastEnders, but it’s a wonderful fusion of these two worlds – and hopefully EastEnders viewers will watch these monologues and actually spot who’s in which house, which I thought was rather fabulous and something we shouldn’t shy away from.

“But it even went down to the props as well, where I was taking objects from one house in Albert Square and putting them into a different one. The props and art directing team were like, ‘You can’t do that –that’s Phil Mitchell’s mug.’ And I’m putting it into Dot Cotton’s house!”

When it came to filming each episode, recording took place in adherence with social-distancing guidelines, which Loader says made it “a pretty strange experience” for everyone. Each monologue has one actor and one camera, but the script is split up into four or five scenes to demonstrate passage of time, either in a new location or the same one but with the actor wearing a different costume.

All rehearsals were done between the directors and actors via Zoom, while hair and make-up designer Naomi Donne also conducted online make-up tutorials using kits she had sent to each actor’s house. Kristin Scott Thomas, who stars in The Hand of God, had to fit her own wig.

The day before shooting, the sets were dressed and lighted, with Bowles working alongside Smith and the EastEnders team to create a cinematic backdrop for each monologue. Then the actor would come in the following day, in some cases seeing their costumes for the first time when they shot their episode.

“Those three weeks before we shot were odd and rather intense because there was loads going on behind the scenes, but it was all happening bilaterally, with two people on Zoom talking about make-up, or a director and an actor rehearsing, or Simon working with the design team,” Loader says. “You didn’t really ever have a sense of what was going on, but you just knew it was all going on everywhere.”

Bowles continues: “ I was dressing the sets, but I couldn’t be there. They propped up an iPad on the mantlepiece of each set and I had a many hours sitting here [in my house] saying, ‘That sofa a bit further left’ and ‘Those curtains don’t work.’ With social distancing, a dining chair could be moved easily by one person. If it was a long settee, two people could move it because they were more than two metres apart.

“But smaller objects, like a heavy armchair or a piano, where you’d need a couple of people close around it, we ended up taking away walls of the sets and bringing forklift trucks in to pick them up and shuffle them around.”

Working with existing sets gave Bowles a rare challenge, as he normally designs sets from scratch. “To Alan, the pieces should be about the cast members so, in his ideal world, they would be performing with a blank screen behind them so there’s nothing to distract from his words coming from their mouths,” he says.

“I had to de-dress some of the sets so you’re just left with the minimal amount. Every single picture on the wall, every cushion, every eiderdown, every settee, every bunch of flowers had to be really specific to that character and the background. Initially, I was very worried that I wouldn’t find enough specific items to address the sets but once I’d ransacked every single set and the small prop store at EastEnders, I was actually delighted.”

The original Talking Heads monologues were broadcast in two groups, with six airing in 1988 and another half-dozen in 1998. Loader says there was a discussion about inviting an older actor to play the two monologues originally recorded by the late Dame Thora Hird, but BBC coronavirus rules meant nobody over 70 could be on set. Those monologues – A Cream Cracker under the Settee (1988) and Waiting for the Telegram (1998) – were then substituted for the two new scripts.

The cast and crew are also donating their salaries to NHS charities. “So our pitch to the actors was, ‘We know you’re at home doing nothing. The BBC want these monologues, they’re brilliant texts. We’re going to not take fees and give a load of money to the NHS charities. And you’ve got three weeks to prepare,’” Loader remembers. “Within three days, we had it cast. Everybody said yes and they all turned up word-perfect on the day, which is extraordinary.” 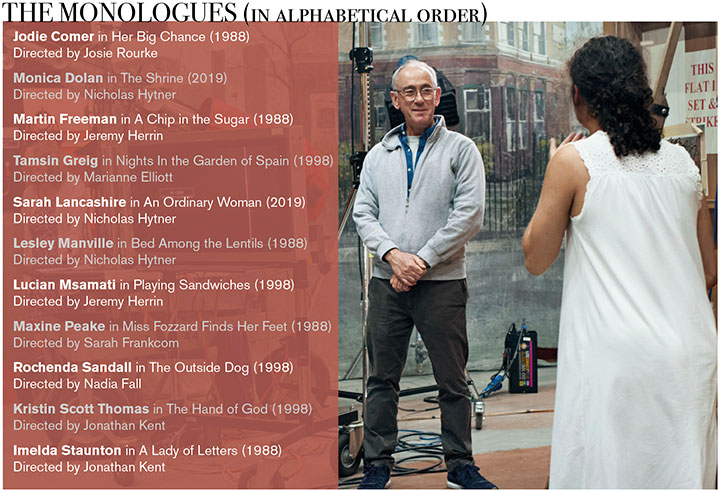 As lockdown restrictions are lifted and TV production around the world begins to restart under strict guidelines, what are the lessons Loader and Bowles have learned as they return to work on Avenue 5?

“Zoom rehearsal probably has no future,” Loader says pointedly. “I don’t think the directors or the actors enjoyed that very much. Production meetings are also more fun in cafés than they are on Zoom. We’ll all be working in the future with smaller crews and things may take a little longer than they did until the situation changes.

“But it is also probably a lesson in how quickly you can find solutions if you have to. We’re very good in our industry at finding solutions, so this was a turbo-charged version of what we do anyway. You can work more quickly and lighter afoot than we thought in certain situations. That’ll probably be good for everyone.”

As for Talking Heads, which is distributed by BBC Studios and begins on BBC1 tomorrow, Loader believes the series marries “extraordinary” writing and performances. “The writing is exceptional. The more you look at them, the more intriguing they are,” he concludes.

“They’re very dark, some of them. They’re about the secrets human beings are carrying. And because a lot of these characters feel rather lonely and isolated, even within their marriages and their family relationships, they speak to a world in which a lot of people are feeling lonely and isolated. There will be lots to ponder and lots to enjoy. And the performances are extraordinary. I’m so moved by many of them, and they’re funny too. People who don’t know them will be amazed by them.”