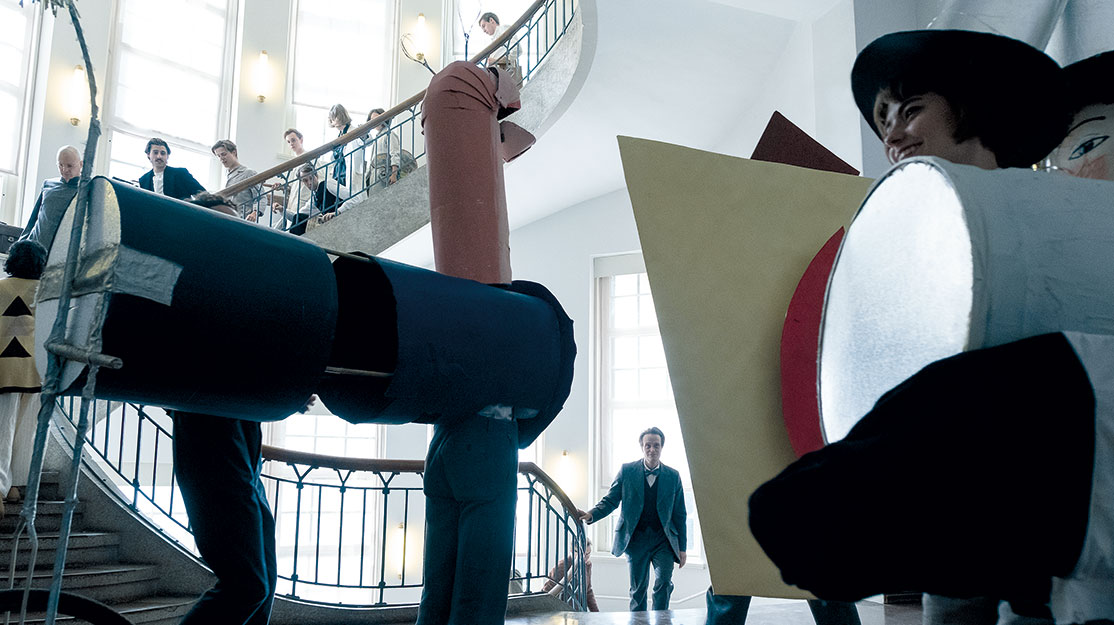 Established in the aftermath of the First World War, the legacy of the Bauhaus can still be felt today. Described as a revolutionary school of art, architecture and design, it was opened by Walter Gropius in 1919 in the German city of Weimar, which would become the seat of the German government at the end of the four-year conflict.

At the heart of the school was the idea of a community of artists working together, rather than the traditional teacher-pupil relationships that had come before it. And they weren’t just confined to the boundaries of fine art – the Bauhaus bridged the gap between artist and craftsman, with pupils learning pottery, printmaking and carpentry, among other skills.

It’s within this fledgling community that German period drama Bauhaus – Die neue Zeit (A New Era) is set. The series, which has its world premiere during Canneseries on Monday, came from producer Thomas Kufus’s interest in the movement. He then asked director Lars Kraume to develop a drama set in this world.

“He asked me if he could think of a story I could tell, and then I asked my wife, who’s an artist, and she said one of the most interesting things would be to show that world through the eyes of a female protagonist, because women had a huge struggle at that time,” Kraume recalls. “The Bauhaus was very progressive in the beginning but then they got in trouble because of the culture that was going on within Weimar and the whole republic, and Walter was forced to put the women all in one class.”

The drama revolves around the real-life figure of a young woman named Doerte Helm, (played by Anna Maria Muehe), who enrolled at the Bahaus. “She was the most gregarious. She wanted to open the class and said, ‘That’s not fair, we want to be treated equally,’” Kraume continues. “She was fighting for her emancipation, and that was the dramatic arc of this first season – it’s the fight of Doerte Helm against Gropius, who is under pressure form the cultural commission and the atmosphere and the upcoming right-wing conservatives who put pressure on these avant-garde people to respect certain rules of the time.”

Season one takes place across five years, up to the point at which the school moved to Dessau in 1925. Much of the story is rooted in history, which Kufus says complicated the scriptwriting process somewhat, owing to the huge cast of characters that feature. “There were the teachers and, on the student side, some of them became very popular [artists], so we have some very interesting figures and we tried to tell it alongside the real story. It took a lot of research,” he says.

“It’s very authentic,” Kraume continues, though he reveals there is one entirely fictional aspect of the drama – a love affair between Helm and Gropius. “They were suspected of having a love affair, which was of course forbidden because he was the director and she was a student. There was no evidence of an affair. But this was where we developed our own story so they do indeed have a strong relationship that at some point turns into an affair. Other than that, everything is true.”

The creative team felt it was important to be as authentic as possible, with the Bauhaus still seen as an incredibly influential movement that helped to shape the 20th century. “If you show a drama series about the Bauhaus to a modern audience, you want it to have an entertaining, gripping story and you want them to learn something about the time as well. We don’t want to be criticised by art historians.”

When he began writing the scripts with Judith Angerbauer, Kraume first created a fictional character he could twist and turn as he wished. But when his research uncovered Doerte Helm – a woman who comes from the old world and suddenly finds herself confronted by modern ideas and thinking at the Bauhaus – he decided to rewrite the whole story with her at the centre. “Thomas was very supportive,” he says of Kufus. “A different producer would have said, ‘Are you nuts?’”

Then in directing, he drew on the wild atmosphere of the school so the visual style wasn’t too conventional. “We shot it all handheld with a zoom and we were always looking for staging that would make it possible to shoot every scene without a cut,” he explains. “We did block it and do other shots, but this kind of staging gives the whole thing a lot of movement and wildness. The actors didn’t have to play for the camera. That makes them very free. My last two historical movies were very classically photographed, but on this we thought it needed to be a bit wilder.”

The six-hour series is produced by Zero One Film in coproduction Constantin Television and Nadcon Film, with Beta Film distributing internationally. Kraume admits it isn’t easy to recreate 1919 Germany, with filming taking place on a lot at Babelsberg Studio on the outskirts of Berlin, as well as in Cologne and Weimar itself.

“Shooting in the first few weeks, we were very unsure about the style and the aesthetics of the film so Lars asked me to be closer and watch the rushes,” Kufus notes. “Lars is one of the few directors I have worked with who makes decisions very quickly. He’s very clear; the actors might offer something and he’ll correct it once or twice, and then it’s clear – and sometimes its only one or two takes. For the producer, but also the entire team, this is a very interesting and convenient way to work because there is somebody who is very clear. He gives very clear answers and directions, so it’s fun to work with him.”

The series is set to debut on ZDF in Germany and French broadcaster Arte later this year, and Kraume and Kufus both see a three-season arc for Bauhaus, with the second run set in Dessau following the school’s move from Weimar, featuring a cast of different teachers and students. With the growing threat of the Nazi Party as its backdrop, season three would see the Bauhaus relocated again, this time in Berlin, as the story confronts the impending Second World War, post-war modernism and its influence in America.

Season one will come with a clear conclusion at the end of six hours, however, as each episode follows the shy, insecure Helm as she grows in stature. “She becomes politically radical and more confident as an artist and woman, and later as a lover. She develops in every episode,” Kraume adds.

“From the art historical side, the role Bauhaus plays today is one aspect of interest; but for modern audiences, you need to add something that is universal. It’s the rise of a young generation against ideas about how life should be created, designed and organised at that time. It’s a rebellion. It’s the story of emancipation of a woman and a tragic love story. After the #MeToo movement, it’s a very interesting look back 100 years ago when women’s liberation started and how it worked. There are various aspects for a modern audience to inform themselves and get an idea of the time.”