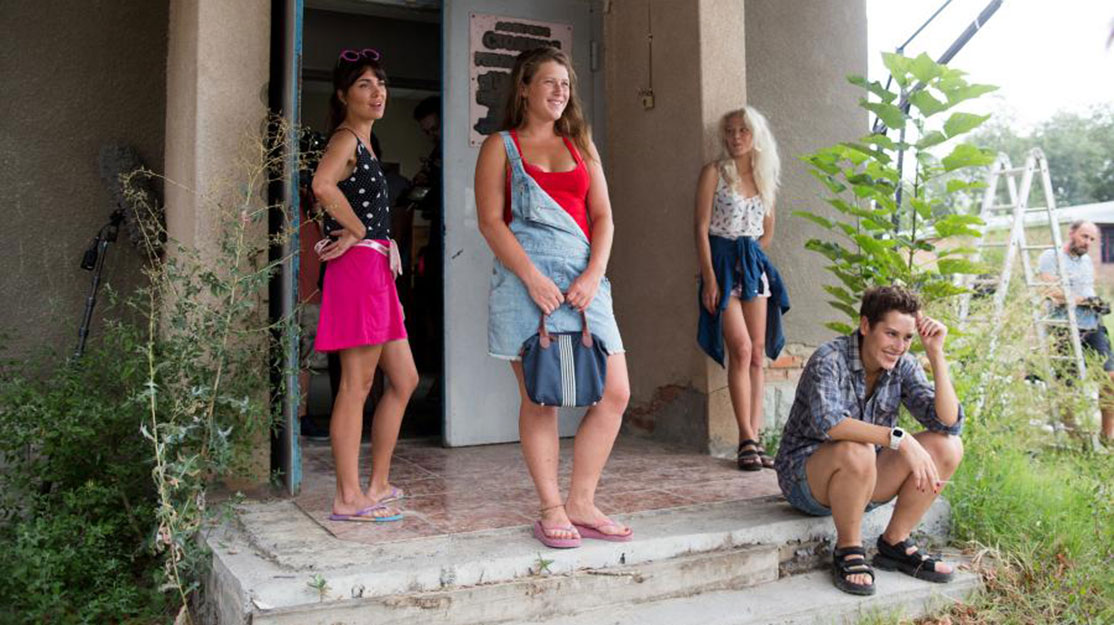 Writer and director Eduard Oganesyan speaks to DQ about Chicks, a Russian drama in which four fearless women fight for independence in a provincial town that is dominated by men.

Set in a small provincial town dominated by men, Russian series Chiki (Chicks) sees four call girls fight for their independence by turning their back on prostitution and opening a fitness club.

The story opens with three friends – Sveta, Marina and Lyuda – earning money in a roadside brothel. When Zhanna returns from Moscow with the idea of starting a business, one by one, they all decide to join the scheme and turn their backs on their turbulent past. But their pimp is not ready to let them go.

Highlighting issues of religion, gender and social inequality, the series was released in Russia in June and has racked up more than 20 million views so far.

Ahead of a screening of the show today as part of Content London On Demand, Oganesyan tells DQ why Chicks was the toughest project of his career – and also his favourite.

Tell us about the series.
Chicks is about inner freedom and the courage to make decisions. It’s about the fact that you can and probably even must believe that you can change your life at any moment. And you have an absolute right to do it. It’s a story about the idea of being human; that it is not just a word. It is important to remember that.

What was the inspiration behind the show?
Life itself inspired me to create this series. I am an ordinary citizen of this country; I have questions and I tried to look for answers. I just tried to dig into these issues. I really wanted to travel this path from the very beginning to understand the inner freedom of these girls and their independence.

What themes are prominent in the story?
The main theme is the understanding that you have the right to self-identification and the right to change the life around you. It’s also about understanding that you always learn, and that at some point you make a decision not to stay put. It’s a story about the change inside yourself.
I also call it a mirror, because we can’t always admit we have shortcomings. However, it’s important to do so because by knowing our shortcomings, we can change them. If you are carried away with closing your eyes [to these issues], there is a danger they will multiply.

Did you have any female voices supporting the project or helping to build the characters?
Of course – my mother and actresses Irina Nosova and Irina Gorbacheva. Irina Nosova was with me from the very beginning of this project. I told her the idea and then we sat together to create the stories of these girls, so she helped me a lot.
Irina Gorbacheva basically took this project and brought it to the studio that ended up producing the show. She was my absolute comrade-in-arms throughout all this time in every aspect. She helped me a lot in creating this project.

How would you describe your writing process?
I do not usually write series. This was my first experience, and I thought it would be right to write with the actresses in mind. That’s why when I had the idea, I only defined some character details, without going in too deep.
After I made my mind up about the actresses who would join me on this path, I started to write the script, taking into account the nature of the actresses themselves. After that, it was easy because I already understood the characters well enough. I was working with Nastya Kuznetsova on the storylining, and occasionally we also met with [co-writer] Anton Kolomeets to work on the outline. Then I went to write it.
After that, there was a long process of editing together with Anton and Irina Nosova. This period was very important, because I came with a big story that was still quite raw. We refined every moment, reading the scenes out loud, playing them and checking the credibility of the dialogue, and rewriting it where necessary.

How did you find the right balance of comedy and drama?
I didn’t want to press on the ‘sore spots’ from the onset, because that is not the way to introduce oneself. It was important for me to gently usher the viewer in, to invite them to serious dialogue with themselves and with the surrounding world.
That’s why I had three comic episodes, to slowly lure the viewer in, and only after that would I begin to talk about and reflect on serious issues. This balance was important for me. It is the hallmark of life that it is often funny, sad and sometimes even absurd. I needed the comedy in order to get closer and start a serious conversation.

How did you juggle writing and directing the series?
It was a necessity – as this is an original story, nobody knows it better than me and I had to be the person to write it. I decided to divide the episodes [between writers] and we were trying to write different episodes, but I couldn’t come to terms with it. It was not my language or my humour. But I must say big thank you to them, and especially to Anton Kolomeets, who told me it was not a very good idea [to split the episodes].
There are a million advantages and there are no disadvantages [to writing and directing your own work]. It really makes production easier, because when you write it yourself, you know the story in detail by physically writing it down, typing it on the keyboard. You are living through it and, in your head, you are already arranging the scenery and the actors.

How did you cast the lead roles?
I created the story first, then I found the actresses, and after that I began writing. I have known Varvara Shmykova, Irina Nosova and Irina Gorbacheva for a long time. There were questions concerning Marina, and I met Alyona Mikhailova later on. I was advised to look at her demo reel and her look suited me very well. I needed such a vivid person, so I called her, we talked, she liked the story and she [signed up].

Where was the series filmed and how were the locations used in the story?
We filmed in the town of Prokhladny, where my mother lives. I never lived there, but I’ve been visiting her for many years. I was born 120km from Prokhladny, in the Elbrus region. One way or another, this area is my home. I knew it, and it just so happened that when I was visiting my mother, this story was born in my head, and automatically this story became the story of a small southern town based on the locations that I knew so well.
There was only one issue: it was a risk to shoot in a town where no one had ever filmed before. Initially, the producers tried to persuade me to choose another location where there would be an understanding of what it’s like to shoot a movie. We went searching for other locations – we went to the Rostov region and to Taganrog – but we didn’t find anything there, so we risked shooting in Prokhladny and I definitely do not regret it.

What challenges did you face in development or production?
This project was difficult at every stage. It was very emotional for me – this story is close to me, and sometimes I was very jealous about certain issues and defended one or another position too aggressively. It was all difficult.
I was also simultaneously editing this project, which was an experience because I have never edited such huge volumes of material. I do not really know how to edit, but I faced the truth and understood that nobody would get into my head and there was not much time, so I needed to do it myself.
This project was difficult from the very beginning until the last second. It was the most difficult project of my life – and my favourite.