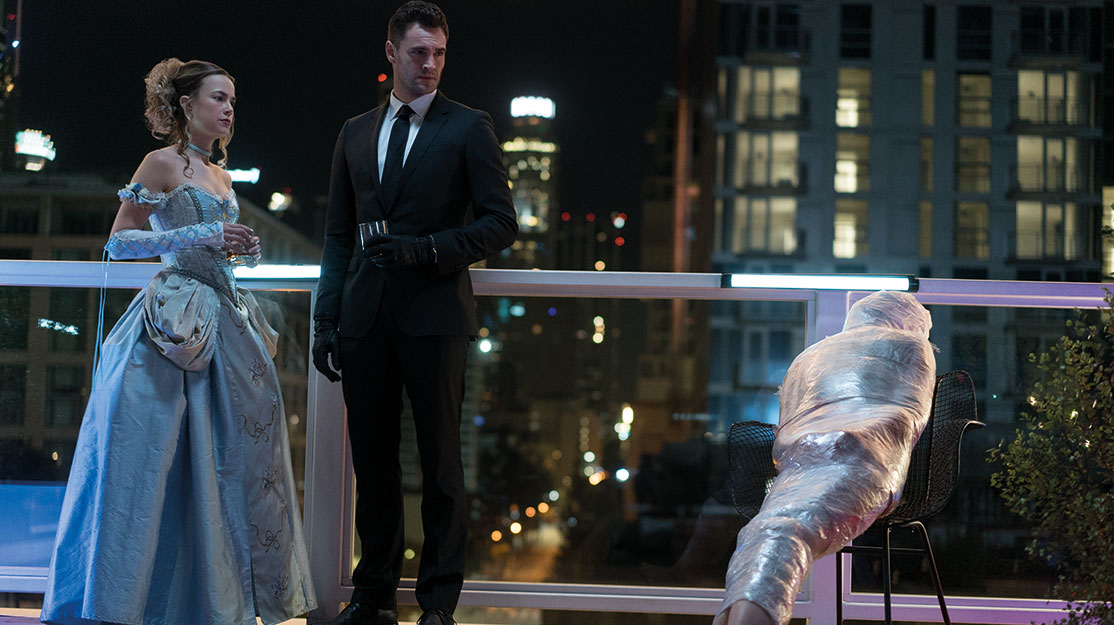 Blumhouse Television is blurring the lines between TV and film with Hulu’s holiday-themed anthology series Into the Dark. DQ finds out more from producer Alexa Faigen.

There’s a scene in Halloween, the latest instalment in the horror franchise kick-started by John Carpenter’s seminal 1978 movie of the same name, where resident bogeyman Michael Myers is walking along a tree-lined suburban street wearing his iconic mask and carrying a very large kitchen knife.

On any other night, he would stand out like a tiger in an antelope enclosure, but not here, because it’s Halloween night and he is surrounded by dozens of children, teenagers and adults all wearing their own costumes. Tonight, he’s just another masked face in the crowd.

The scene is also notable because it echoes the premise of the first episode in a new television anthology series produced by Blumhouse Television, one of the studios involved in the latest Halloween movie. Into the Dark comprises 12 episodes that are released on streaming service Hulu once a month and tell a story specifically about or relating to a US holiday taking place that month.

The series launched in October with Halloween-themed The Body, in which a sophisticated hitman with a cynical view of modern society finds his work made more difficult when he has to transport a body on Halloween night, but everyone is enamoured by what they think is his killer costume. Ring any bells?

November’s offering, Flesh & Blood, takes place on Thanksgiving, while episode three (December) will be set at Christmas and episode four (January) at New Year. Other holidays to feature in the year-round event series, distributed internationally by Sony Pictures Television, include Valentine’s Day and April Fool’s Day.

With Blumhouse making a name for itself both in TV (Amazon’s The Purge) and feature films such as Paranormal Activity, Insidious, Whiplash and Get Out, Into the Dark manages to balance elements of the big and small screens.

“At its conception it was really a complete hybrid, so we toggle between saying episode or film for each episode because it really does straddle the line. We use different principles from different sides of the business to help us with our decision-making along the way,” explains producer Alexa Faigen, who has overseen the first, third and fourth episodes of this “unique” project. “Obviously it’s made for streaming on Hulu but the ambition is incredibly cinematic and, for the most part, we’ve enlisted filmmakers with feature backgrounds. That has been part of the approach for the entire time.”

That approach has been aided by the “tremendous amount of energy and optimism” afforded by Blumhouse through the development and production phases, according to Faigen. “I love that they try to do things that are challenging, both from a process standpoint and a content standpoint. They often make the impossible possible and I love being part of that,” she continues. “On one hand, they are very hands-on; and on the other, they are very freeing to the creative process. So it’s a very happy relationship. They’ve really figured out how to straddle the line between studio and producer and gave a lot of freedom and flexibility within the series to the creative while also keeping the objective in mind. It’s definitely a series with an idea behind it and an audience we’re trying to get, and they always keep that front of mind.”

Episode one, set during Halloween, was written by Paul Fisher and Paul Davis, and episode two, in which an agoraphobic teenager begins to suspect she is in danger on Thanksgiving, was written by Louis Ackerman and directed by Patrick Lussier. While a holiday is firmly baked into each episode, it may or may not have a direct influence on the story that plays out. Each part may also appeal to a different audience, meaning Into the Dark does not adhere to one particular genre or theme – horror, for example – throughout its entire run, echoing Blumhouse activity on the film side, where it has produced in a range of genres.

“The Halloween episode is a horror comedy about how a hitman wisely uses Halloween to cover his job,” Faigen reveals. “On Halloween, no one suspects a killer actually killing someone. It’s a really funny episode that has a really odd, idiosyncratic love story at the centre. We think it’s a great launch for the series.”

Christmas-themed episode three is written by Gerald Olsen and directed by a Spanish director Nacho Vigalondo, who Faigen describes as “a tremendous talent who really brought such a unique vision to this piece. It’s a very unique and noisy episode.”

In contrast, episode four is an all-women episode directed by Sophia Takal. “It’s a completely different look from any of the others that will have come before it,” Faigen says of the New Year special. “Sophia did a tremendous job with the look, tone, message and themes in a very purposeful way. I think it will grab people.

“The organising idea is really Blumhouse and the holidays but, beyond that, each episode has a unique look, tone and purpose that is very filmmaker-specific. It’s a really exciting way to approach an anthology series that really has a filmic quality to it.”

Episodes are being filmed back-to-back, with some occasional overlap, while everything is filmed in LA, whether the City of Angels is the setting of a particular story or doubles for another location. Some pillars of the production team also provide some continuity, though each episode brings in a whole new cast, writers and directors.

“It was wild,” Faigen says of production, which saw episodes filmed in just 15 to 18 days. “July was a very challenging month in my life but it is for Blumhouse as well. Although different producers will come in and do different episodes, they shoulder all of it. They’re just going in all phases at all times. From my point of view, it was a wild summer but it’s exciting.”

While the pace may have been slightly frenetic, working on multiple episodes at once afforded Faigen a far-sighted view of the series, which meant they would try to avoid repeating elements from one episode in another and could experiment with different techniques. “But the real heroes are the crews, the production designer who cohesively moves from episode to episode, the stunt coordinators, the effects team and also the editorial team. The crew and the people we’ve been fortunate enough to work with are really heroes to keep it running. We wouldn’t be able to do it without the motivation, tenacity and artistry of all of them. I think it’s also very exciting for them because every time a new director comes in, it’s a new energy. They’re not continuing a look and a tone for an entire series. They’re getting challenged from a creative standpoint every time out. So although it’s incredibly taxing, it’s also very invigorating and fun.”

Had it not been for the recent trend for anthology series that has continued to blossom since the debut of American Horror Story back in 2011, Into the Dark may not have found a platform. Faigen says the ongoing popularity of anthology series is a sign the television business is responding to viewers’ ‘consume anywhere’ approach to the medium, which demands varying episodes and running times.

“Things that were out of fashion or impossible before are now things people are taking new bets on, and that’s really exciting,” she adds.

tagged in: Alexa Faigen, Hulu, Into the Dark