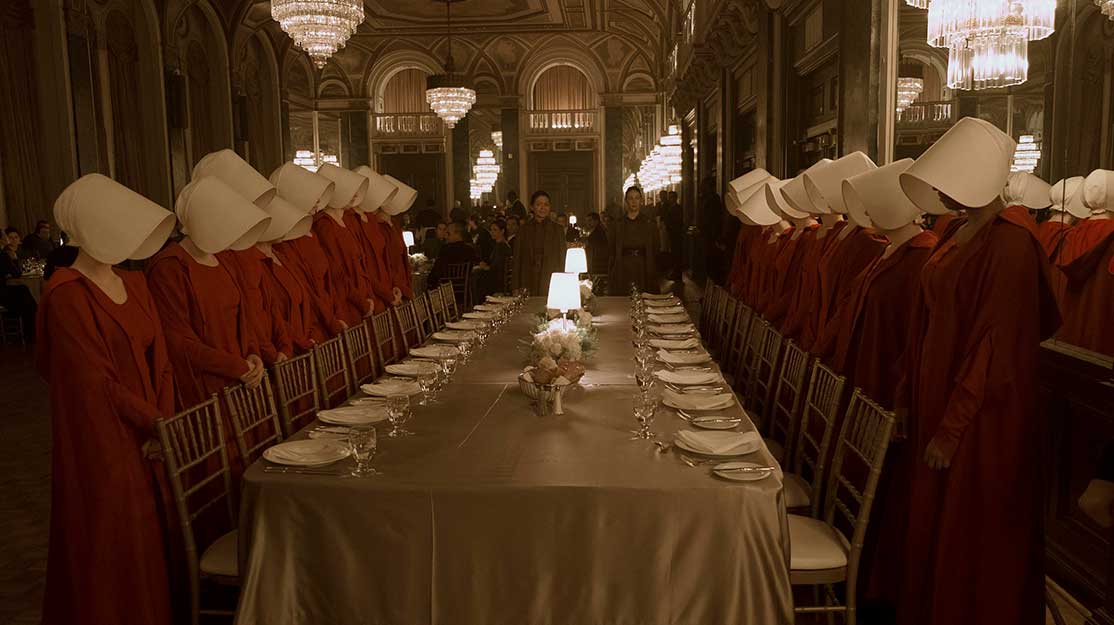 Former NBC Entertainment president Warren Littlefield discusses the success of The Handmaid’s Tale and the lessons he learnt making the leap from broadcaster to producer.

With Hulu’s The Handmaid’s Tale (above) scoring 13 Primetime Emmy nominations and FX’s Fargo earning six, Warren Littlefield has a hand in two of the biggest shows on TV right now.

But it is with the The Handmaid’s Tale, a gritty adaptation of Margaret Atwood’s landmark 1985 novel, that the former NBC Entertainment president – who serves as an executive producer on both aforementioned series – has found a cultural phenomenon.

The 10-part drama, which airs on Hulu in the US, Channel 4 in the UK and Bravo in Canada, has found a dark mirror in current affairs. Across the US, protesters have taken to wearing red robes and white bonnets – the attire of the titular handmaids in Attwood’s dystopia – to raise awareness of hot-button political issues such as Planned Parenthood and abortion rights.

The show has a “grotesque timeliness” in the age of Trump, according to The New Yorker, and as the series finale wrapped in the UK at the end of July, “No television event has hit such a nerve,” proclaimed The Guardian.

The maelstrom of contemporary resonance is not lost on Littlefield. “Margaret’s work has been relevant since the time she published it and any time within the last 32 years would have been a perfectly good time to adapt her book,” he tells DQ. “We felt that relevancy rising, and then we were in the middle of production – deep in the middle of shooting the series – when Trump won the election. And that became a new level of ‘we better not fuck this up.’

“When the development process was going on, we were in a Barack Obama world, but clearly there was a sense that Brexit was a loud, loud alarm that went off,” he adds. “You could see it and you could feel it, throughout the globe, that rise of the right and the alt-right. We were a country that was becoming more and more divided.”

Though Hulu renewed the show for a second season in May, The Handmaid’s Tale began its journey to the small screen with MGM and exec producer Ilene Chaiken originally developing it for Showtime. When the US cablenet passed on the project, streaming service Hulu saw a chance and moved in.

“Hulu said, ‘We really like the idea of doing this as a series; our choice would be to start with another writer.’ Ilene had gone off and done Empire [on Fox] and they said, ‘Let’s do two scripts and begin again,’” Littlefield explains.

“That was acceptable to MGM, so Hulu and MGM interviewed a lot of writers. Ultimately, [showrunner] Bruce Miller came in and said, ‘OK, I know I’m not a woman, and if I were you I would hire a woman to develop this property. But, since I’m here in the room and you’ve granted me this meeting, this is my take on how I would do it.’ And they said, ‘Wow, he gets it.’”

WME, which represents both Littlefield and The Handmaid’s Tale star Elisabeth Moss, approached the exec to see if he was interested in coming aboard. At the time, Littlefield was exec producing FX’s anthology crime dramedy Fargo, which had just won him a Primetime Emmy.

“I read it and said, ‘This is incredible material,’” Littlefield recalls. “I was ramping up to do Fargo [season] three, so on a practical level this made no sense, but I just said to Lizzie [Moss], ‘I don’t know about you, but I can’t walk away from this opportunity.’”

While showrunner Miller was acute enough to realise that a show centred on female repression would take flack for not being helmed by a woman, he and Littlefield preempted some criticism by filling the crew with female talent, including most prominently in the writing and directing departments.

Of the hires, the biggest bet the team took was in hiring acclaimed cinematographer Reed Morano to direct the show’s first three episodes.

“She had very little directing experience,” Littlefield recalls. “She didn’t have an Oscar, she had never done a pilot. She was an award-winning DP, but had almost no experience as a director, and yet we felt that she was the right person, that she understood what to do with this material.

“If I were at a traditional network, a) they wouldn’t have done the show, but b) they never would have signed off on Reed Morano. And we hired her for the first hour and then I said, ‘I’m looking at the schedule, and I think she’s going to do all three. That’s what I want to do.’”

In many ways, making a dystopian SVoD drama is a step far removed from the 24-episode realm of broadcast sitcoms where Littlefield cut his teeth.

As a protégé of the late Brandon Tartikoff, he climbed the ranks, serving as senior and then exec VP at NBC Entertainment, before rising to the role of president – a post he held from 1993 to 1998. During that time, he oversaw a primetime line-up that included Friends, Seinfeld, Will & Grace, ER, Cheers and Frasier.

Nevertheless, he says lessons learned from his broadcast days are still applicable today.

“There was a philosophy that the late and wonderful [former NBC chairman and CEO] Grant Tinker helped instil in us, when we were young programmers and broadcasters, and that is: respect the audience,” Littlefield says. “We tried to aim high in my NBC years, and audiences rewarded us for that.

“That was a great lesson to learn as you’re growing up in the broadcast business. The world has changed, however. We’re in this age of peak TV – I think of it as platinum TV – where audiences reward you for outstanding work. The difference now is the quality; as much as I’m proud of what we put on the air when I was at the network, the level of quality that goes on the screen now is unlike anything that’s ever been done before.

“It doesn’t matter if an actor or director has an Oscar, they want to go where the most complex narratives, and the most complex, sophisticated characters can be found,” he adds. “And, for the most part, that’s television.”