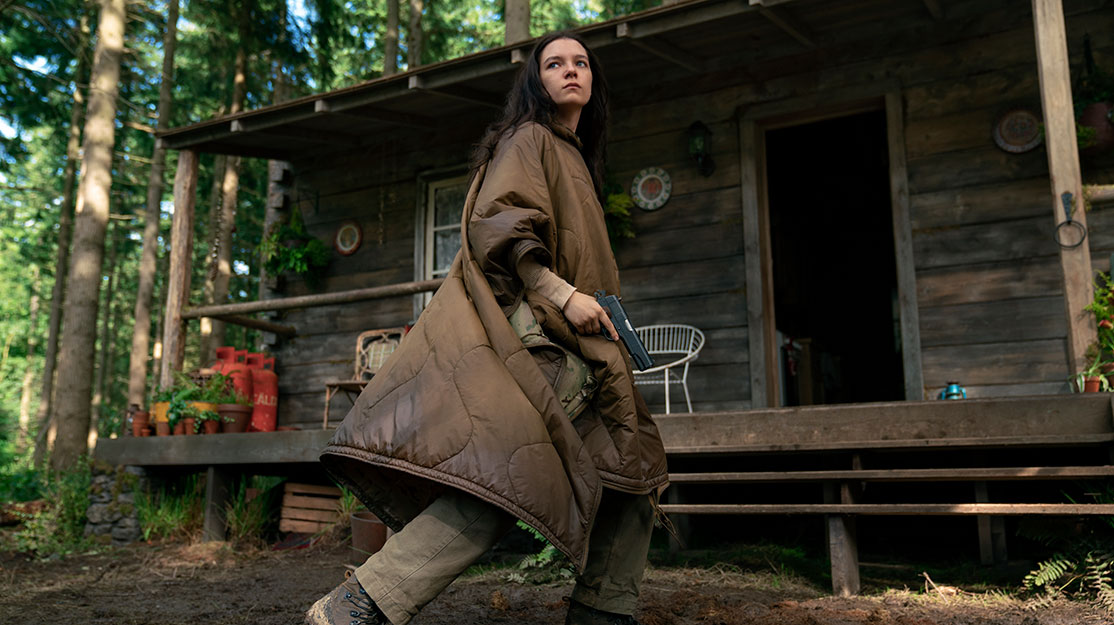 Delivered to Amazon Prime Video the week before the UK went into its coronavirus lockdown in March, Hanna’s second season was completed just on time. Launching in more than 200 countries tomorrow, it represents the kind of series – one boasting numerous global locations and a cast and crew brought together from around the world – that will be tough to make while travel restrictions remain in place.

“We are doing a lot of thinking about what [shows like Hanna] might look like and how we achieve it,” says executive producer Tom Coan. “The idea of this post-Covid world can be very confusing and overwhelming. Essentially, it’s one additional layer of health and safety we need to put into an already robust process.”

But one thing that won’t be changing is Hanna herself and the world in which she exists. “There are certain stories where [the impact of coronavirus] will be interesting. But this isn’t one of them,” says series creator and writer David Farr. “Hanna exists in its own, totally individual, strange world, which is definitely not real in any kind of conventional sense. It’s truthful, but it’s not real. We’ll be keeping well clear.”

Hanna’s second season sees Esmé Creed-Miles return as the titular character, who was raised in isolation by her father Erik (Joel Kinnaman) and subsequently hunted down by CIA Agent Marissa Wiegler (Mireille Enos). At the end of the first run, which debuted last year, Hanna discovered she was not the only young woman with unparalleled skill and elite training. The Utrax programme, from which she was taken as a baby, has now produced a whole contingent of highly trained teenagers whose development is about to reach the lethal “second phase.”

But while the series continues to revolve around Hanna and her view of the world, season two digs much further into her past and introduces new characters in the form of some of the other girls trained by the Utrax initiative.

“The first season was very much a coming-of-age drama. She had to learn about the world and how it worked,” says Farr, who also wrote the Joe Wright-directed film on which the series is based.

“This is much more about ‘How do I want to be in the world?’ and ‘Where do I belong?’ We develop a whole new element, which is these other trainees who did not have the fortune to be stolen. They’ve been brought up entirely by the Utrax programme and they are now about to be unleashed on the world. That bit was probably the most rewarding to explore because it was obviously something completely fresh. The film doesn’t go anywhere near that. We’re way beyond the movie now.”

Following Hanna’s escape from the Utrax facility at the end of season one, S2 opens with her back in the remote wilderness – but she’s not alone, accompanied by Clara (Yasmin Monet Prince), one of the trainees who chose to escape with her. Early scenes show their complicated relationship mirroring that between Erik and Hanna in season one, when Hanna rebelled against Erik’s instance that they live off the grid. Now Clara is pushing against the boundaries set down by Hanna, who is also coming to terms with Erik’s death.

That’s where Marissa comes in. Having helped Hanna escape in season one, she now offers the teenager the chance to start a new life. However, Hanna instead decides travel to England, where the trainees are being kept at a countryside facility known as The Meadows.

“In the absence of Erik, she’s seeking a new home,” Farr says of the lead character. “Marissa offers one opportunity, but it was Marissa who was trying to kill her for half of season one. There are reasons why Hanna would be distrustful and why that relationship, therefore, is fragile, flawed and blows up.

“The other option, which is much darker but also more intriguing, is to think maybe she was always meant to be in this place [with the other girls]. Maybe she shouldn’t have been stolen – maybe the normality is these other girls. Beyond that, she then discovers a whole other reason to live: actually, she is here to fight.”

While season one stood Hanna against the faceless Utrax organisation, this time that threat is personified in the form of John Carmichael, played by new cast member Dermot Mulroney. Farr says he didn’t want the show to have a conventional baddie, and My Best Friend’s Wedding star Mulroney fit the bill.

“Evil projects are often run by very affable people– because why would you run an evil project with a person who looks evil? That strikes me as incredibly dumb,” the writer says. “So you hire Dermot Mulroney to run your project for you because it will feel and look better. One of the key things they’re trying to do for these girls is they’re trying to socialise them, to make them feel normal. Who better to teach than someone who looks so fabulous? There’s a gentleness to him, and it’s those nuances he does really nicely.”

The new trainees at The Meadows are handed new identities to learn and take out into the world, and each is given a scrapbook containing lots of photos and information about their lives. This tasked script editors Ella Jones and Luke Stapleton with creating dozens of backstories for these characters, while a member of the art department assembled the detailed scrapbooks.

Especially intriguing is how the girls either adopt or rebel against these new identities, leading to discussions about religion and identity and commentary on how identities can be constructed, which is particularly pertinent in the age of social media.

“Sandy [Áine Rose Daly] and Jules [Gianna Kiehl] are two new girls. Jules is by nature a maverick, ‘brought up’ to question things. But Sandy’s ‘brought up’ to not question things, to obey and to be faithful,” Farr says. “What’s great, of course, is this is totally invented and they’ve learnt it all from a book, but they believe it, they invest in it and they make it real. Both those actresses really lent into that stuff really well. They’re a great new additions and have big roles all the way through the season.”

Having written most of season one himself, with Ingeborg Topsøe picking up one episode, Farr worked with Paul Waters, Laura Lomas, Nina Segal and Charlotte Hamblin in the writers room for season two, which is produced by Amazon Studios, NBCUniversal International Studios, Tomorrow Studios and Working Title Television.

“You have to learn how to do writers rooms. They’re quite tricky because, on one level, it’s inevitable I know more [about the show] than anyone else, but that’s not helpful at a certain point because I only know what I know,” Farr says.

“Suddenly you get someone else coming in and they find a different way into things that’s very exciting. There’s a scene Nina wrote in episode five that has a specificity around the kind of way two women talk to each other. I wouldn’t have done it that way. That was really exciting – I felt like it was taking the series somewhere.”

Admitting it was a risk to go without a traditional villain, Farr teases that there is a reason Utrax remains an organisation hidden in the shadows, with its motives and ambitions being revealed slowly.

“That’s why the Carmichael character is very important, because now that Marissa is no longer that adversarial character, you have to have something Hanna’s fighting, and that has to feel interesting and dangerous,” he says. “That was the thing I was most concerned about. How do we personify the danger and the threat and that malicious force? Can we do it subtly? Can we do it through people not knowing what it is? That was definitely the biggest challenge.”

Filmed in Hampshire and London in England, Snowdonia in Wales, Paris and Dunkirk in France and Barcelona in Spain, season two was directed by Eva Husson, Ugla Hauksdóttir and Farr, who picked up the final two episodes, marking his first time directing the show.

“I very cunningly placed them in Barcelona, which is my favourite city, so I had to do it because it would be terribly unfair of someone else to be allowed to,” he jokes. “Eva did the first section that got us to The Meadows and Ugla did The Meadows, where these girls get trained. Then I got the most conventional section – it’s a proper thriller in episodes seven and eight, where there’s a threat to the whole operation that has to be dealt with. Hanna and Marissa are on one side, Sandy is on the other and Clara is in the middle. It’s still very character-based, but there is good narrative and there’s a strong thriller ending.”

Coan, NBCUniversal International Studios’ senior VP of scripted programming, praises producers Laura Hastings-Smith and Callum Devrell-Cameron, whom he says were at the coalface of the production, charged with coordinating its numerous location shoots.

“It’s a little less of a road story this year than it was in season one, but part of a pan-European thriller is going to be discovering different places,” he says. “Some of the challenges I remember were around shooting in Wales, where we were in the woods in the beginning [doubling for Romania].

“The production dates happened to overlap with a festival that happens in Wales annually, but it moves from place to place and it’s only ever in the same place every 30 years. It so happened that, in this particular year, it was at the exact place where we were supposed to shoot, so we had to accommodate for that.”

Farr says the series will take viewers to “really emotional places” this season while still boasting the “wham bam” action scenes that made season one stand out – although the latter will also take on a more intimate element thanks to some impressive hand-to-hand fight sequences. “There’s also a much broader breadth of interesting characters,” he says. “The first season is really tight and aggressive. This has got different colours and, by the end, takes us to a very emotional place.”

Coan adds: “If you want to know a little bit more about the mythology of Utrax and what it is that’s going on, and to have a closer understanding of the origin of this story, you have to tune in. If you want to see Hanna kick more ass in a new and fun ways, it’s also worth tuning in for.”