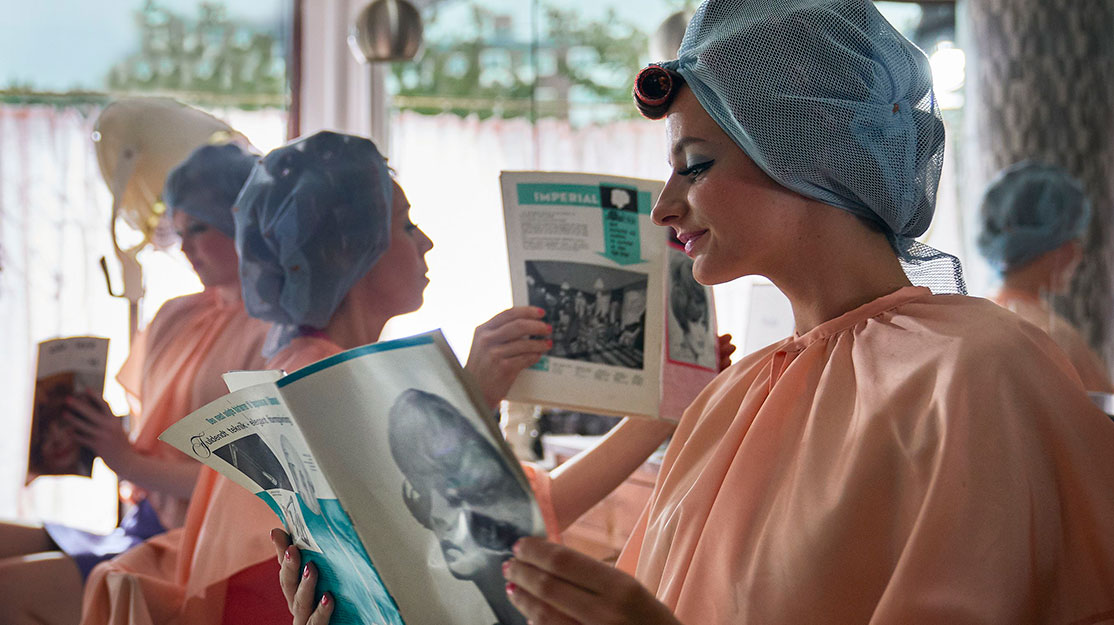 As filming continues on Danish period drama Carmen Curlers, writer Mette Heeno and producer Stinna Lassen tell DQ how the invention of the electric hair curler changed the fortunes of one man and thousands of women, as the series shows.

In the studio space within DR Byen, the Copenhagen headquarters of Danish public broadcaster DR, filming is continuing on upcoming period drama Carmen Curlers. Five floors above the set, series creator Mette Heeno and producer Stinna Lassen are preparing for the end of the first shooting block, marking the halfway point of production, while gearing up for block two to begin after Christmas.

Heeno is also busy storylining season two, after DR gave an early renewal to the eight-part series, allowing filming on the two seasons to take place back-to-back. S1 is due to debut in autumn 2022.

Inspired by real events, Carmen Curlers begins in 1963 when entrepreneur Axel (Moren Hee Andersen) stumbles upon a new invention: the electric hair curler, which promises a cheap and quick way to create a curly hairstyle that would normally take several hours in a salon. What begins as a small operation in his basement soon leads Axel to worldwide success and a factory that employs 3,500 people.

Set at a time when the Danish economy is booming, the story also charts how thousands of women went from being stay-at-home wives to going out to work for the first time and earning their own money.

The show has been planned to play out across three seasons, concluding in 1969, by which point Axel decides to sell his factory to an American cosmetics company.

Heeno originally spent several years developing Carmen Curlers as a feature film about a man and his “crazy invention.” But after further research, she found there was so much more to the story.

“It’s not just the man and the electric curler, it’s what happens when this goes into production, how he gets all these women into work for the first time in their lives and how that affects societies, families and everyday life,” the writer tells DQ.

“What happens when women start to make their own money? That’s the biggest game-changer in the 60s. It was a story that was really too big for a feature film, so I started to develop it as a miniseries, and then it turned into one season. And when we started working at DR, we fell completely in love with all the characters and all the women surrounding Axel, the families and the whole society around this guy and the factory, so we decided it had so much potential that we had to make it into a huge story.”

Based on the history of the real Carmen Curlers and its inventor, Arne Bybjerg, the series features fictional and composite characters created from those who really worked at the factory. Among the latter is Birthe (Maria Rossing), a farmer’s wife who rises up to become Axel’s business partner.

“She becomes one of the only women in management,” producer Stinna Lassen says. “That’s very impressive in the first season, but it brings her a lot of challenges in the following seasons. She’s a woman in her own right but she will also be managing other women working in the factory, and that will create some conflict.”

“We’re inspired by real characters but we have made a lot of fictional choices, so we have invented Axel’s wife [Tove, played by Rosalinde Mynster], who really wants to work but her husband doesn’t want to let her because he’s the alpha male in the relationship,” Heeno says, noting the irony of a man who introduced thousands of women to paid employment but wants his own wife to stay at home.

“There’s only room for one person with power in the relationship and he’s not giving her that kind of power, so she’s also one of the big characters in the beginning. We have quite a big cast where we mostly follow Axel and Birthe and their relations.”

There’s also an ‘old money’ rival in the form of Poul (Christian Tafdrup) and his wife Vita (Mille Lehfeldt), who stand in juxtaposition to forward-thinking Axel, who builds an emergency room, fire station, helicopter landing pad and kindergarten at his factory. “But there are no good guys or bad guys,” Heeno adds. “They’re all just trying their best.”

The creative team have been in touch with Bybjerg, who is now in his 90s and lives in Australia, and spoken to numerous people with links to the original factory, whether they worked there themselves or remember their mothers doing so. They also talked to the engineers who helped to build the curlers and to one of the hairdressers who first worked with Bybjerg to demonstrate how they worked.

“Arne wished us a lot of luck and asked to send him the DVD when we were done,” Lassen says. “It’s been very important for us to say we are definitely inspired by him and his adventure. But besides that, it’s a fictional story about all these women who came into the workforce.”

“One of the most fascinating things about talking to all these people is they all considered this factory or this workplace as their family,” Heeno says. “He sort of replaced their home life with their work life, and he did it in a manner that was very atypical for the time – he had a lot of parties and competitions where you could win extreme prizes like trips to Mallorca and Gran Canaria. For the first time, they had friends or they got friends, and they got to know how the world worked outside their own little community.

“When you talk to some of the women today, they feel so proud. It’s a very special place for many people. There are a lot of stories, which change when you talk to someone who was there in 1964 and then with someone who was there in 69, when they wanted equal pay. In 64, they didn’t care; they just wanted money. And then in 69, they were like, ‘Yeah, we want what the men are getting.’ So there’s some development as well, and we’re going to reflect that in the three seasons. It’s also a story of these women, so we see them from the very beginning, starting at their workplace, and then slowly they want more, they want something different, they get divorced or they move.”

The story plays out during the Swinging Sixties in Copenhagen, a period of “colour, music and possibilities,” meaning Carmen Curlers will be “really something quite different from what you usually see out of Scandinavia,” Lassen says. “It’s been so much fun researching and filming the period. We don’t have any rules for which colours we can use because it was just such a colourful time and will be reflected in the visual style of the show.”

Produced and distributed by DR, the series will also feature a lot of music, as well as choreographed scenes following Axel’s perspective, including one scene in which he dances through a salon.

“We want the show to be brave, and it’s been important for us not to make a classical period piece,” the producer continues. “We’re mainly using handheld cameras, for instance, which is very atypical of a period show. And it’s important for us to be close to the characters. It’s not important to see period cars driving around. We’ve tried from the beginning to incorporate all the restlessness from the 60s into the show’s DNA.”

“It has a larger-than-life layer,” adds Heeno, who wrote the series as if it were a modern story. “We also have split screens and voiceover – everything you’re not supposed to have. We’re breaking all the rules!”

While Heeno, whose Swedish series Snöänglar (Snow Angels) debuted earlier this year, already knew Lassen, Carmen Curlers marks the first time they have worked together – and the colloboration almost didn’t happen. After producing Når støvet har lagt sig (When the Dust Settles) for DR, Lassen was asked by its then drama head Christian Rank to return to the broadcaster.

“I said, ‘Thanks, but no thanks,’ and he said, ‘But it’s Carmen Curlers.’ I knew about the show Mette had developed, I knew the story and I really loved it, and I was like, ‘I’ve got to do that,’” she recalls.

It’s not been without its challenges, particularly when, five months into storylining, Carmen Curlers went from a 10-part series to a show potentially spanning three eight-part seasons. Although Lassen and Heeno welcomed the belief DR had in the project, it meant expanding a story that takes place across a finite six-year period.

“When it was one season, we had the factory there from the get-go, but now we spend the first five episodes with our main characters and the rest of the ensemble trying to make the curler work, trying to get the patent and trying to get the funding to build the factory,” Lassen says. In production terms, that meant the first four episodes were mostly filmed on location around Copenhagen rather than in the studio where the factory scenes were shot later on.

“That definitely takes a toll on the crew. When you turn on the camera, no matter where you point it, you have to produce it in order for it to look 60s-realistic. But we have an absolutely incredible crew, hair and makeup department and costume department. It’s their dream project because this is a show about hair. Their room has hair pins and curlers everywhere!”

While some viewers may know the story behind Carmen Curlers – and others may use Google to find out – Lassen says it was important for the plot to be surprising and unpredictable as Axel sets out to achieve his ambitions. Viewers will also be able to follow many of the supporting characters along their own story arcs.

Although Carmen Curlers is a national success story for Denmark, both Heeno and Lassen believe it has huge international appeal, with future seasons set to move beyond Copenhagen as Axel’s company expands around the world. The producer compares it to watching one of the contestants in business series Dragon’s Den pitching a new invention and “the fascination of seeing someone with a good idea that maybe is a little weird, a little crazy, but they just believe in it, they quit everything, they take out a mortgage on their house and they just do it.”

“There are so many turning points, plus all the conflicts in the relationships and the family dramas,” says Heeno. “But you want this factory to succeed. You want these people to succeed.”