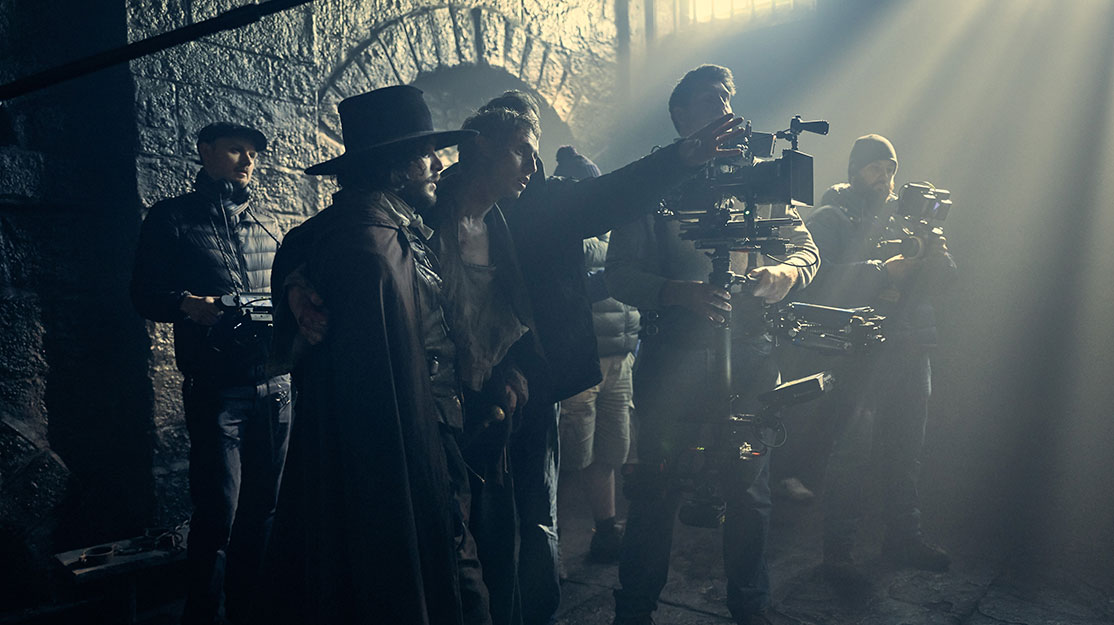 Kit Harington and Liv Tyler travel back in time as the stars of historical thriller Gunpowder. Production designer Grant Montgomery tells DQ how he recreated 17th century England for the three-part miniseries.

It’s one of the best-known stories in the UK – but a three-part drama aims to shed new light on the people and the politics behind the Gunpowder Plot of 1605.

Every year on November 5, Guy Fawkes Night is marked with bonfires and fireworks to celebrate the discovery of the conspiracy to kill King James I by blowing up the House of Lords during the state opening of parliament in 1605.

The festivities take their name from the man who, having been caught red-handed guarding the gunpowder, became most strongly associated with the plot. But as forthcoming BBC1 drama Gunpowder depicts, Robert Catesby was actually the lead conspirator.

Kit Harington takes the lead as Catesby – of whom the Game of Thrones star is a direct descendant – in a cast that also includes Peter Mullan, Mark Gatiss and Liv Tyler.

But long before the cameras began rolling, it was production designer Grant Montgomery who was tasked with recreating 17th century England.

“The problem with a lot of Elizabethan or Jacobean properties is you can’t recreate them, there aren’t many streets left,” he says. “They don’t really exist. We looked at The Shambles [a period street] in York but to close that down and physically take it over on the budget we had was probably nigh on impossible.

“So essentially we built a backlot at Dalton Mill. Then we built the Tower of London set inside that as well, a cavern where they plot, houses, plus a section of the Palace of Westminster, which is what they were trying to destroy. That was all built in there, we took it over.”

The seven-week shoot took place between February and April this year, but Montgomery estimates just seven or eight days were spent filming on location during that period. The reason, he reveals, was somewhat unusual: “We found that at a lot of locations, we couldn’t burn enough candles. There are a lot of restrictions on a lot of these properties, especially [those owned by the] National Trust. We went to one and we were told we could only light 25 candles, and we wanted to light 150.”

That meant sets were built for Baddersley Clinton, a manor house that served as a refuge for Jesuit priests at the height of Catholic persecution, the king’s bedchamber and spymaster Robert Cecil’s (Gatiss) war room. In total, about 80% of the shoot was filmed on set, which was first built to represent London and was later redesigned as Warwick, where the plot began.

Locations used included Fountains Abbey, in North Yorkshire, which served as both the undercroft beneath the House of Lords where the gunpowder was stored and the exterior for Baddersley. Hadham Hall in Hertfordshire was used for Catesby’s family home.

Location scout Nick Marshall had scoured great swathes of northern England looking for suitable filming sites, but when few possible places turned up, Montgomery and producers Kudos and Thriker Films decided to build the sets instead. That convenient and cost-effective decision also turned out to be a creative masterstroke.

“The more research I did, the more I realised that a lot of the panel work [inside these houses] had been decorated. If you were rich, you painted your panels,” he explains. “So while we didn’t necessarily colour-code them, we started to paint the interiors. It gives it such a distinctive look and the audience also knows where it is at any one point. That’s really important because it’s quite a convoluted plot – it feels like a John le Carré spy story.”

Some sets couldn’t be built, however. The River Thames, for example, was recreated by adding CGI to a section of water in York. “We cheated a bit,” admits Montgomery, whose other small-screen credits include Peaky Blinders, Beowulf: Return to the Shieldlands, Jamaica Inn and Brontë sisters drama To Walk Invisible. “I like to do everything I’m able to [on camera] but as long as you blend live with CGI, you get something that looks interesting. It’s complete CGI shots that have to be really well done [if they are to look believable].”

Throughout the project, authenticity was a keyword for the design team. Montgomery even joined a tour of the Tower of London to ensure the show was as true to its period as possible – even if the truth is sometimes stranger than fiction.

“It has an authenticity because it was there in the language and embedded in the script when I first read it,” the designer says of the show, which is distributed by Endemol Shine International. “It was great to be able to get that muddy London look and to try to keep away from it being super clean. You even see a scene where the king is at his toilet and you just think this must be a really filthy world, even at the court. No wonder they didn’t live long!”

Despite the BBC series, which launches on October 21, not falling on a particularly notable anniversary, Montgomery says the ever-present threat of terrorism in modern-day Europe means this 400-year-old story remains hugely relevant.

“It’s still contemporary,” he concludes. “The questions it asks you are still pertinent – what does the government do to control you? How does it rule? Does it take away people’s liberties? All those questions are bound up within the script.

“I don’t think it’s black and white; it’s much more complex than that, and that makes it a very relevant piece of television. Even though it’s a period piece, it still has something to tell us from the past.”