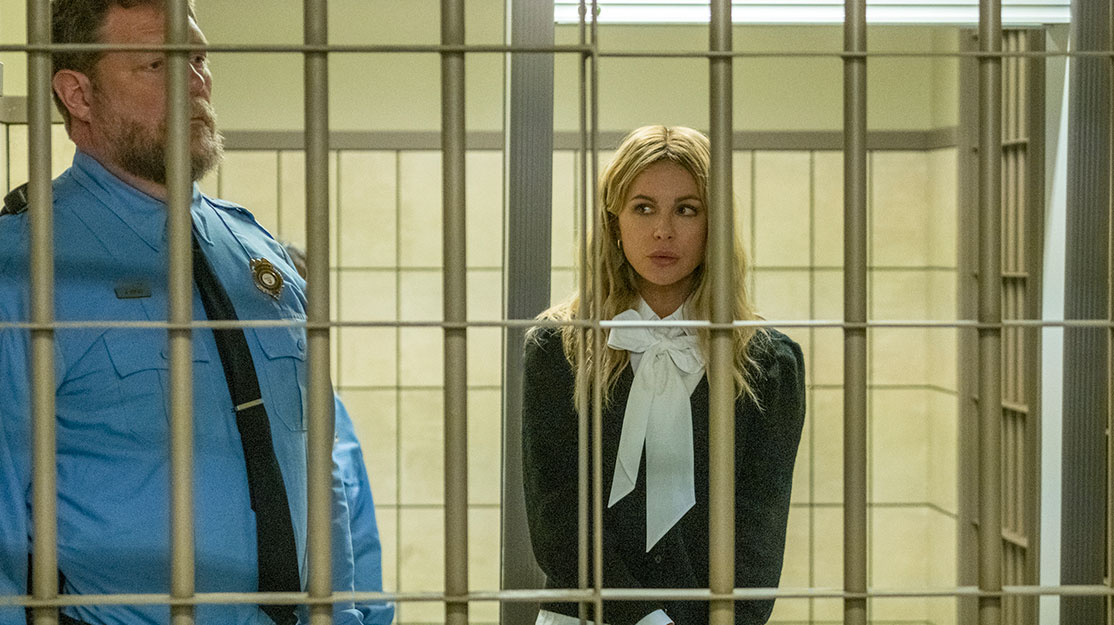 Rebecca Addelman reveals how a true crime podcast inspired her Paramount+ dark comedy drama Guilty Party, in which a discredited reporter picks up the story of a mother who claims she has been wrongly sentenced to life in prison.

In autumn 2014, true crime podcast Serial became a worldwide sensation, with journalist Sarah Koenig investigating the 1999 murder of Hae Min Lee, an 18-year-old Baltimore student, and the events that led to the conviction of her ex-boyfriend Adnan Syed.

The acclaimed series became a cultural phenomenon, won a Peabody Award in 2015 and accelerated the rise of audiences’ interest in true crime across both podcasts and TV.

At the centre of the compelling story was Koenig’s relationship with Syed. Koening interviewed him from prison about Lee and explored whether he had a fair trial, using their phone calls together as part of each episode.

That connection between reporter and subject has now inspired Guilty Party, a dark comedy drama launching in the US on streamer Paramount+ today. Created by Rebecca Addelman (Dead to Me), it stars Kate Beckinsale as Beth, a discredited journalist desperate to salvage her career by latching on to the story of a young mother sentenced to life in prison for maiming and murdering her husband – crimes she says she didn’t commit.

But as she tries to uncover the truth, Beth finds herself out of her depth, contending with Colorado gun smugglers, clickbait culture, the doldrums of marriage and her own tarnished past.

When DQ speaks to Addelman, the finishing touches are being applied to a series that has been more than five years in the making, though that process sped up once the project – produced by CBS Studios in association with Funny Or Die and Mosaic and distributed by ViacomCBS Global Distribution Group – received the greenlight in May last year, originally at sister streamer CBS All Access. The origin of the show can be traced back to a conversation she had with a fellow producer about Serial and their shared fascination with the podcast.

“It was one of those almost happenstance, magical conversations,” Addelman recalls. “Almost immediately, I connected it to Truman Capote and [murderer] Perry Smith in Capote’s novel In Cold Blood, and then various other iconic true crime stories that I love mainly because of the character development.

“I’ve never been that drawn to the nuts and bolts of true crime. I realised I was drawn to this idea that two people who would otherwise never have met found some kind of really distinctive relationship. That is what the storytelling hinges on. From there, I pretty quickly started to develop a journalist character and then develop her ‘subject.’”

In Guilty Party, Beth’s subject Toni (Jules Latimer) isn’t just a background character. Addelman describes the mother, who has been sentenced to 92 years in prison without parole for murdering her gun runner husband, as the co-lead who tells the other half of the story as it shifts perspective through the series.

“It definitely begins through Beth’s eyes and perspective, somewhat taking a cue from that Sarah Koenig model where we couldn’t know much about Adnan except through her eyes,” she explains. “We’re meant to be piecing together something that is objective, like who committed a crime, who killed someone, yet everything about how we understood this man was rather subjective. I thought it was rather fascinating to create a similar dynamic where we’re initially meeting everyone through Beth’s eyes and her perspective.

“But the show does attempt – I hope successfully – to dismantle that. It really does invite Toni’s perspective into the season. It also asks us to question why we let ourselves see things through Beth’s eyes from the start. Perspective becomes something we try to play with – who gets to essentially tell the story and why do we trust and believe the people who tell our stories?”

Addelman’s question is given extra weight by the fact viewers find Beth miserable in her new job, pitching notable human-interest stories that are turned down in favour of clickbait listicles penned by her younger colleagues.

“We wanted to put her in a position where you could really feel her fall from grace,” Addelman says. “You can feel this sharp decline in her career. She considers herself a respectable journalist, whatever that means. But she has fallen into a position she thinks is beneath her – essentially, she believes she is better than that.”

But despite describing herself as a truth seeker, Beth’s tarnished reputation adds question marks over her position as a reliable narrator through the series. “She comes from a place of extreme privilege,” the showrunner continues. “The fact Beth is essentially an overprivileged white woman and has gone through life with that, seeing things and living with all the privilege that her whiteness and her class have given her, those were not just accidental choices on our part. They do inform almost everything she is doing and saying and how she both views and treats her work, her subjects and everyone around her.”

That privilege is no better expressed than in the scene in which Beth and Toni, dressed in orange prison overalls, meet for the first time. Beth’s throwaway comment that she’s having a bad day is quickly knocked back by the inmate who claims she is wrongly behind bars.

“I don’t call her the hero of the story,” Addelman says of Beth. “I just call her our protagonist; she really is our central character. She’s incredibly complicated, and she is actively making bad choices – choices that some of us may relate to and some of us may not know. But what I’m hoping is that as we watch her, we can understand and we’re maybe fascinated by what makes her tick and what makes her make some of the choices she does.

“But I don’t want to make her sound as if she’s completely disconnected from reality and from everyday existence. I do think she’s pretty reflective and representative of a lot of us. Maybe the dial’s just cranked a little higher in terms of how she chooses to behave on some of her impulses.”

Addelman says it’s fun to write a character who is “wildly imperfect,” likening Beth to characters such as Tony Soprano (of The Sopranos) and Walter White (Breaking Bad) who are inherently bad people yet extremely watchable on screen.

“What I enjoyed about writing Beth is it’s fun to write a character who is often lying to herself, who wants to be and is striving to be seen as something other than what she truly is, and whose own instincts that were seeded in childhood are growing and coming to bear in the present day in her adulthood,” Addelman says. “She almost can’t help herself. That is a rather compelling thing to write. They can’t resist doing something that is self-serving or, let’s say, not always on the moral compass pointing to the good, so that is rather fun.”

In the writers room, Addelman had an “inkling” of where she wanted her characters to land at the end of the series, but she says much of the story changed around the table as the writing team discussed the characters with whom Beth comes into contact and conflict.

“I was often trying to make a conscious decision that while Beth might be morally skewed and morally complicated, she’s not surrounded by perfect people either,” she says. “All those other folks around her, whether it’s her boss or her rival, they’re almost worse. Everyone is a little morally corrupt. We start to really understand Beth, we start to really understand Toni, and yet it’s not a show where deep lessons are learned and everyone changes. We try to walk that fine line of giving a certain amount of truth and emotional complexity and yet keeping our characters human.”

Another layer of Beth’s character emerged when Beckinsale came on to star in the series in place of Isla Fisher (Wedding Crashers), who had originally been cast in the lead role but left “amicably” following the emergence of the Covid-19 pandemic.

The change gave Addelman the opportunity to work with Underworld and The Widow actor Beckinsale, “a true icon” who is “as adept and as truthful in both comedy and drama,” the showrunner says. “We don’t hear Kate Beckinsale’s name and immediately associate her with comedy, yet she started her career in all these great comedies like Cold Comfort Farm, Much Ado About Nothing and The Last Days of Disco. She has just perfect, impeccable comic timing. It was really exciting to me to bring someone like Kate into the project because she’s got this deep arsenal of talent and so many skills.”

As an exec producer, Beckinsale was also a “really committed, incredible creative partner” who supported the script process and helped to form the Beth we see on screen. “The Beth that exists in season one was really formed in collaboration with Kate,” Addelman adds. “I’m the number-one cheerleader in the Kate Beckinsale pep squad. She was truly a fantastic partner.”

Looking at its premise, Guilty Party might not appear to be a naturally funny show. But with a background working on shows such as Netflix’s Dead to Me and Fox sitcom New Girl, “I don’t want to write or do anything that doesn’t have a degree of humour in it,” Addelman says. Even on a show that features themes and topics including the American prison system, racial injustice and domestic abuse, her ambition was never to run into those issues head-on and treat them very dramatically.

Instead, it was to treat them truthfully, with a degree of humour and, at times, a note of satire. “I do think that helps the medicine go down,” she says. “I was often looking to filmmakers like the Coen brothers, who combine things like crime with a degree of comedy and character development, and filmmakers like Spike Lee, who’s one of my favourites. He has a way of dealing with some of the heaviest issues of our time and he’ll wallop you with something really intense but then he’ll make you laugh in the next scene. To be able to combine all facets of life and humanity and keep people laughing and keep the humour alive, that’s just philosophically something that’s important to me.”

As for the show’s title, who might the guilty party be? “Not everything is black and white,” Addelman notes. “We open the show with a crime and there’s an answer to the crime. Someone did kill that man. Someone is guilty of that. And yet the show starts to take on all these other considerations.

“We start to discover everyone in the show is guilty of something. Every single character gets somewhat put under the microscope and falls somewhere on a very grey spectrum of guilt and innocence. That’s where that title came from.”