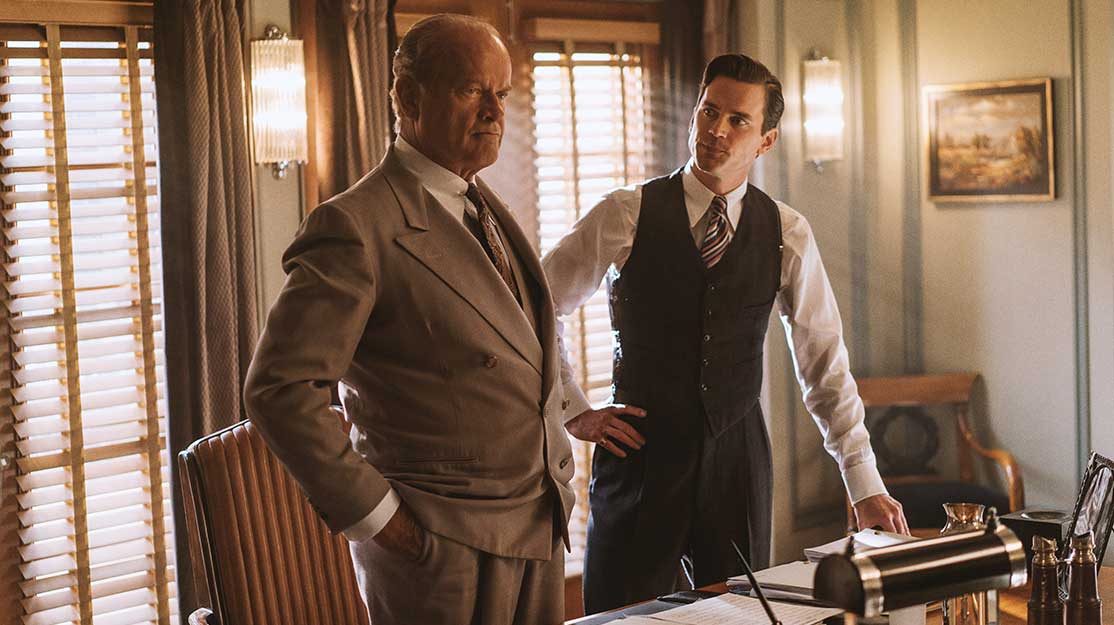 With screenplays including The Hunger Games, Captain Philips and State of Play to his name, writer Billy Ray has worked on some of the biggest Hollywood movies of the last decade.

So it’s notable when he describes making Amazon Prime drama The Last Tycoon as the most fun he’s ever had. “I’ve never had a working experience that was better than this from the start,” he says of the streamer’s adaptation of celebrated American author F Scott Fitzgerald’s final novel.

“I so love the book, I so love its voice and tone and I had such a strong feeling that the conversations people have on movie studios today are the exact same conversations that were being had in Fitzgerald’s book, and it seemed like the perfect vehicle to talk about the dynamics in Hollywood. Then on a character level you have all these dynamics, and the idea just seemed inexhaustible because the people are so compelling. It’s literally been my favourite job I’ve ever had.”

After writing a bible for the series but having no prior experience of working in TV, film veteran Ray partnered with seasoned TV exec Christopher Keyser (Party of Five, Sisters) to bring The Last Tycoon to the small screen together as co-showrunners. Three years later, in June 2016, Amazon launched a pilot, allowing viewers the chance to view and rate the show ahead of a possible series commission.

The streamer was suitably impressed with the feedback, greenlighting a full nine-episode first season a month after the pilot launch.

It follows the lead of Fitzgerald’s novel, itself inspired by the life of legendary film mogul Irving Thalberg who helped create Metro-Goldwyn-Mayer and produced more than 400 films at the studio. The book was previously adapted in 1976 as a movie starring Robert De Niro and Robert Mitchum as Stahr and Brady respectively.

“It’s about the dream of Hollywood and the reality of Hollywood,” Ray explains. “We’re writing about a period in which that dream became captured on film and became immortalised. That filmic fantasy of America really began to be sold in the 1930s and, in some way, the world still believes in that vision of America. That’s the power of the movies.”

Keyser continues: “The question of what we thought of ourselves [at that time] and whether we were telling ourselves a lie, or whether it was true or a necessary lie – that’s really interesting and it’s still really interesting, unfortunately, in 2017.”

Speaking about the cast, the showrunners claim Bomer is “the perfect Monroe,” while Grammer brings physicality, gruffness and humour to the role of studio boss Brady, adding that the pair were the only actors to whom the parts were offered.

The same was true of Collins’ (The Blind Side) casting. “Lily was the only person we offered the part of Celia to,” says Ray. “You could see she was a rocket ship about to take off, which is now happening [with films such as Okja and To the Bone]. She was so utterly charming and beautiful. Then Rosemarie DeWitt [La La Land] had a tiny part as Rose Brady in the pilot; she was only in two scenes so Chris and I had to do some serious lobbying to get her to take the part – and with her we developed Rose into a fully fleshed out character, who it turns out is absolutely vital to the show and, for some, one of the most intriguing parts of the show. She was also our first choice – it was just one of those parties people wanted to be a part of.”

Still, Keyser notes that unearthing new talent is part of the fun of television, and he believes The Last Tycoon, which rolls out in more than 200 territories and countries tomorrow, features several actors on the path to stardom.

“Take a look at Mark O’Brien, who plays Max Miner, Enzo Cilenti, who plays Aubrey Hackett, or Dominique McElligott (as Kathleen Moore), who’s been in a number of series but we didn’t know her until we did this. She’ll be well known to people because of House of Cards and Hell on Wheels. There are names you haven’t really heard of who I think are going to show something special, and that’s one of the great things about TV. You don’t have to have stars; it makes stars. Wait until you see [Flashdance star] Jennifer Beals as the reigning queen of the 1930s cinema, Margo Taft.”

Ray and Keyser hadn’t worked together before pairing up for The Last Tycoon, knowing each other only through their association with the Writers Guild of America. That meant they had figure out how they would partner on the show, though they reveal there are no boundaries between what they each do or don’t do.

But while Ray writes and also directs multiple episodes, he admits he leaves a lot of the behind-the-scenes work to his partner: “There’s another part of it that the public doesn’t see, which has to do with maintaining the relationship with the studio [TriStar TV] and the network, and making sure their voices are heard while ensuring the sensibility of the show doesn’t change in over-response to notes. Chris is very good at navigating all of that stuff.”

“We did have some really amazing other people who were working with us,” Keyser says. “In the long run, being a showrunner is, in the large part, finding great people and more or less trusting them to do their jobs.”

After the pilot launched on Prime Video, Amazon shared some of the feedback with Ray and Keyser – something many producers say generally doesn’t happen at Amazon or similar platforms like Netflix, where key metrics such as viewing figures aren’t released, even to the programme makers.

But Keyser notes that the Amazon system of seeking feedback from a pilot isn’t that much different from other, more traditional networks – only in this scenario, it’s the viewers who get to give their opinions.

“One of the big differences in this world is not so much the way we make this stuff but the fact that the way we deliver it actually affects the stories we tell,” he explains, pointing to the way television dramas have evolved from strict episodic procedurals to a much more fluid, serialised format. The Last Tycoon, in fact, adopts a hybrid form, with individual episodes telling standalone stories but also tying into the themes of the whole season.

“Television storytelling has become more or less anything it wants for an audience that can watch it at its own pace – they can turn to the next chapter whenever they feel like it. That’s improved TV storytelling. We are the beneficiary and it allows us to take a novel and turn it into an even longer story.”

The drawback to this, Ray concedes, is that writers can be keener to finish each episode on a cliffhanger, encouraging viewers to watch the next one immediately.

“You definitely are conscious of wanting to put something at the very end of an episode that will be intriguing, titillating or terrifying enough that someone will click and stay with it,” he says. “On our show, that represents challenges and opportunities, but we were always mindful of it.”

The showrunners put together a writers room, led by Keyser, though they both agreed that Ray would write most of the first half of the season to lay down a clear and consistent voice that could then be carried through the remaining episodes.

“But they were all stories Chris and I had worked out together for over a year by that point,” Ray says. “Then you empower the people in the room to write their own episodes and, happily, we had hired really well and they did some beautiful work. Everybody was always steering in the same direction. That made the process run very smoothly.”

In fact, the production process on The Last Tycoon is one of the things Ray points to when asked about why he enjoyed making the show so much. “It’s magic. I don’t mean that in a flippant way – it’s absolute magic when I think about what our crew is able to construct and reconstruct and flat-out make up [when recreating 1930s Hollywood]. We had magicians working for us on our crew.

“That meant every prop, costume and hairstyle was completely thrilling for the actors,” Ray adds. “Every time they walked onto the set, they loved the way they looked. Everything helped ground those performances, which is why I think they’re as much fun to watch as they are.”