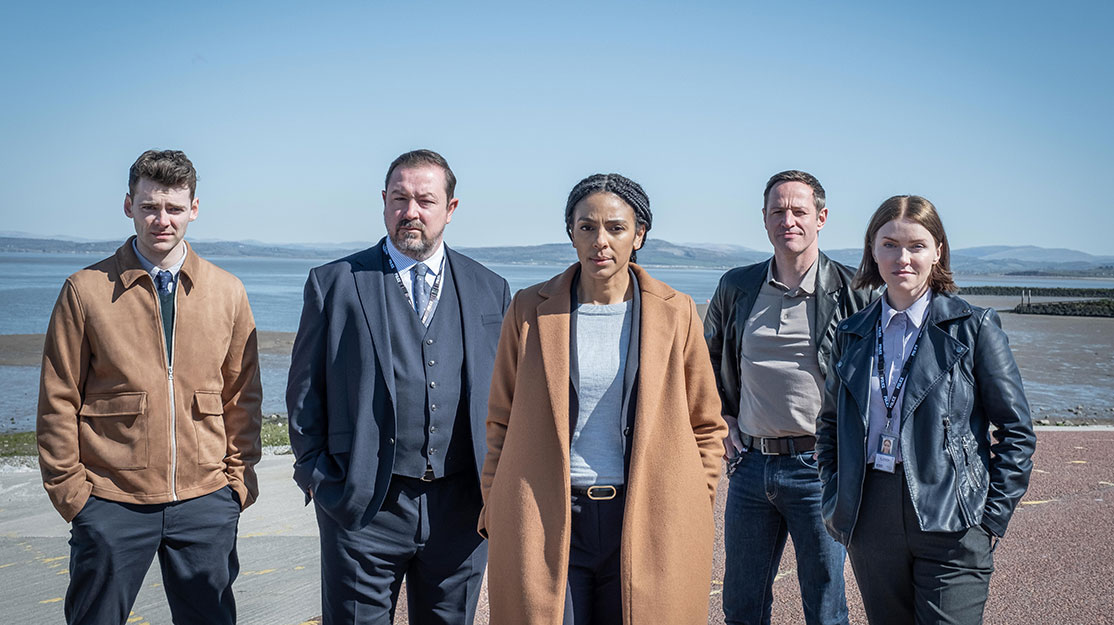 Going with the FLO

The Bay creator Daragh Carville and new star Marsha Thomason speak to DQ about the return of the crime drama and the arrival of a new family liaison officer (FLO) to its picturesque Morecambe setting.

Over two seasons, crime drama The Bay has established itself as one of the biggest series on UK broadcaster ITV, drawing an average audience of more than seven million viewers.

Set in the English seaside town of Morecambe, the show follows the police investigation into a murder from the unique perspective of a police family liaison officer (FLO).

But as conversations began about bringing the show back for a third season, creator Daragh Carville and executives at producer Tall Story Pictures had a particularly difficult obstacle to overcome – the loss of The Bay’s lead actor.

Since The Bay’s launch in 2019, Morven Christie (The A Word) has played DS Lisa Armstrong, who is called upon to investigate the disappearance of two children in season one and then the murder of a prominent solicitor in season two.

After Christie announced she was leaving the series, the search for her replacement began, and viewers will now get to meet Marsha Thomason (Cobra) as Morecambe CID’s new FLO, DS Jenn Townsend, when season three launches tomorrow.

In the six-part new run, Jenn is immediately thrown into the deep end when a body is found in the bay on her first day at work, having moved with her family to Morecambe from Manchester. She must then work with a grieving family if she has any chance of solving the death of an aspiring young boxer. Jenn’s problems begin to mount further when her new blended family struggles to settle in a new town.

Thomason joining The Bay was a case of life imitating art, as the actor and her character were both joining already established teams. “But for me, it was really easy because everybody was so lovely,” the actor tells DQ from her home in LA. “They are some of the nicest people I’ve ever worked with. They were just so welcoming, even before I got to the set.

“It started with executive producers Catherine [Oldfield] and Daragh, and the cast set up a WhatsApp group for us – ‘Bay cops’ – and we did a couple of Zooms before we worked together. They were incredibly welcoming. By the time I got to set the first day, I was a little nervous because it was the first day, but it was easy.”

The actor has played police officers before, notably opposite The Bay co-star Dan Ryan in BBC series Messiah and in US shows White Collar and NCIS LA. She had also seen season one of The Bay and was a fan of the show before she found out the production was seeking a new lead, the search beginning after season two had been filmed but before it aired in January last year.

With additional credits in shows such as Lost, Playing the Field and Las Vegas, Thomason says she hasn’t had the opportunity to play very many lead roles during her career, “mostly because those opportunities have not been coming along for people of colour.”

She continues: “I’ve been acting for 30 years. When Kerry Washington was cast as the lead in Scandal 10 years ago, it was a big deal because there hadn’t been anyone on a US network leading a show like that or a woman of colour in years. It was very few and far between, so that changed the landscape quite significantly. We’ve all seen it. There’s clearly a concerted effort to level the playing field, so I was very ready for this opportunity. I had such a great time doing it.”

After a very quick audition process, Thomason began preparing for the role in November 2020, before shooting began in March last year. As part of her homework, she was given a ‘Jenn bible,’ which contained numerous details of the character’s backstory and her arc through the season so that by the time she came to set, she knew everything Jenn had been through and where she was heading.

“Jenn is an incredibly competent person, and in her work in particular. But she’s definitely hit some kind of a bump in the road and lost her confidence,” Thomason explains. “This move with her children to Morecambe and the new job, it’s all a big deal. She’s got a lot going on, so we’re meeting her at a difficult time in her life. She’s moved her teenage children from Manchester in with her new partner – who she’s only been with for 18 months – and his teenage daughter. It’s bound to be chaos. Teenagers are not known for being easy-going. I don’t know what she was thinking.”

That underlying tension is brought into the open when her personal and professional lives clash early on in the story, leaving Jenn open to accusations of focusing on her work over her family.

Carville admits feeling a “jangle of mixed emotions” when he heard Christie would be stepping away from the show, finding himself sad that she would be moving on but excited at the chance to refresh the show with a new lead character.

“I loved working with Morven and writing for her, and I thought she brought Lisa completely to life. I’ve no doubt she’s a big part of the success of the show,” he says. “But we had this sense that the show could continue with a change of lead, so it was a chance really to reinvigorate and reinvent the series. It’s over to the audience now to find out what they feel but, for me, it’s absolutely the same show.”

As soon as he and Oldfield saw Thomason’s audition tape, they knew she had the right characteristics to play Jenn – someone who is empathetic and emotionally open to be able to engage with people at the worst time in their lives, but also really tough so the police work doesn’t affect her own emotional life.

To a certain degree, those same qualities could be found in Christie’s Lisa, so how did Carville seek to ensure Jenn stood apart from a character audiences were already familiar with?

“Even before we met Marsha, we knew we couldn’t just replace Lisa with a carbon copy of Lisa. We needed to do something different in the way we’ve done with the family stories we’ve always told,” the writer says. “Every year there’s a new crime and a new family we get to know, so we knew our new FLO needed to be different.”

One of the biggest differences is that, unlike Lisa, fish-out-of-water Jenn is not a Morecambe local – ‘Sandgrown’ – and so doesn’t know the town as well as her predecessor.

“She’s got to find her feet and she’s quite nervous about it,” Carville continues. “When we meet her, she’s on edge because this is her first day and she’s got a lot to prove. That edginess and nervousness and that slight doubt about her capacities is something that’s very different from Lisa, who was tough as old boots. There’s a bit more of the imposter syndrome with Jenn. She’s empathetic to a fault, basically. She’s very good at her job, but she’s very sensitive. All of those elements feel new.”

As with the previous seasons, S3 introduces a new family who find themselves at the centre of a murder investigation. While S1 featured a working-class family and S2 involved a middle-class family living in Morecambe’s leafy suburbs, Carville knew early on that he wanted to tell a story involving an Asian family this time around.

“But I didn’t feel that was my story to tell,” Carville says. That led him to partner with co-writer Furquan Akhtar (Wolfe) to develop the story and co-write episodes. “Furquan has brought a brilliant degree of texture, detail and reality to the lives of all of the Rahman family, the guest family of this season, and I’m really proud of that story.”

While some dramas may be hitting their stride in a third season, a new lead character offered Carville a natural opportunity to refresh The Bay, though he says he hasn’t felt the need to reinvent the wheel.

“The essential elements of this drama remain constant: a crime affects a family and into that family goes our FLO to work closely with them and help them through this experience, but also to help solve the crime,” he notes. “The primary role of the FLO is always as an investigator. They’re not just there, as they’re always keen to tell you in real life, to pass the tissues. They’re there to find evidence.

“This is both a crime drama and a family drama. Both things need to constantly be in operation. What that actually means, in practical writing terms, is a lot of hard work because you’re constantly spinning plates. That’s just the challenge of writing the show, but that’s also the reason I want to write the show. I’m not really interested in pure police procedural, but nor would I want to write a pure soap opera-ish family drama. I’m really interested in crashing those two genres together. It needs to be emotionally truthful but also have a narrative drive and big turning points and hooks. Balancing all of that takes a lot of work.”

Taking place in Morecambe and the North West of England last spring, the shoot afforded Thomason the chance to return home to Manchester, where many of the interior scenes are filmed. As the first name on the call sheet, she also wanted to set the tone for the production on set. That often involved dancing to songs on a custom Bay playlist, which would be played at the end of particularly heavy or emotional scenes.

“I’ve been on many sets and that’s absolutely what happens,” she says of taking on a leadership role. “If the lead actor’s a dick, it trickles down. It’s not great. It makes the whole thing less fun and more stressful. I just like to have a good time on set. I love my job. We get to pretend to be other people for a living – it’s ridiculous, right? I just relished the opportunity to set a fun tone and have it be a good time for everyone.”

Both Thomason and Carville identify The Bay’s focus on character and the way it looks at events from the perspective of an FLO as reasons for the show’s success at home and overseas, with distributor ITV Studios sending The Bay to more than 100 countries around the world.

“You really get to empathise with the family and what they’ve gone through. You put yourself in the shoes of these people who are experiencing the worst thing we could ever imagine. It’s got a lot of heart,” Thomason says.

Morecambe is also important to The Bay’s popularity, adds Carville, who lives in nearby Lancaster. “Part of the audience response is also a response to place,” he says. “On the one hand, it’s really beautiful. It’s got this extraordinary natural beauty when the sun sets over the bay.

“But at the same time, it’s quite gritty and there is a lot of poverty and deprivation in Morecambe. It’s on the edge of things. Over the years, it’s been a little bit forgotten about and there’s a sense of faded grandeur. I love those contradictions and tensions in places, and Morecambe itself is a huge part of the show.”