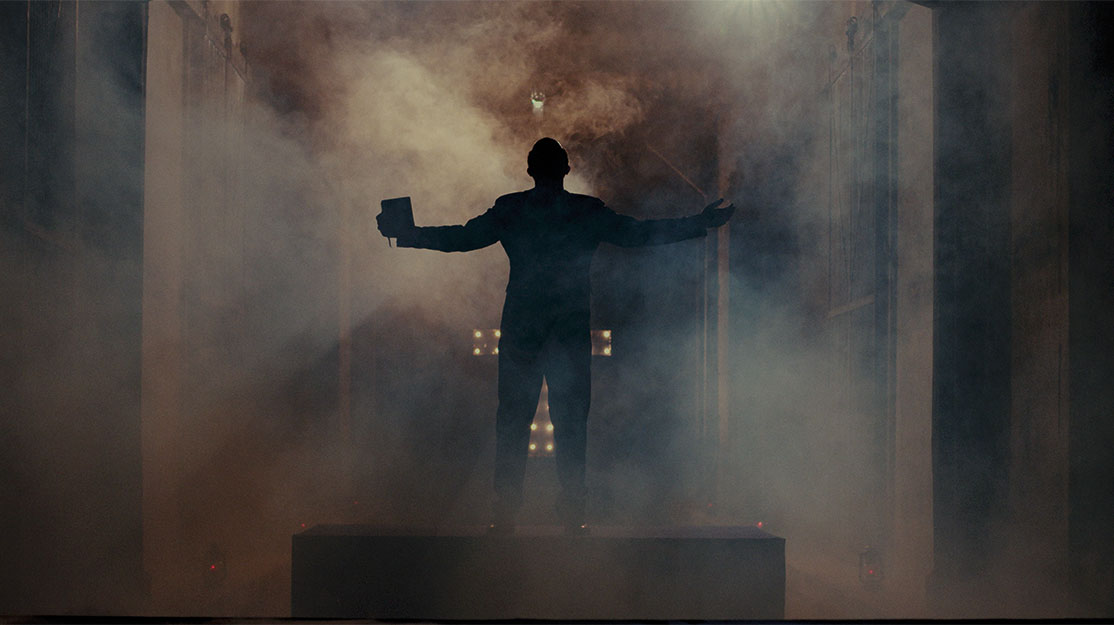 Portuguese crime drama Sul (South) places viewers in the sunlit heart of Lisbon through its stunning visuals and atmospheric soundtrack. DQ meets the cast and creative team behind the show.

A melancholic, broody soundtrack and sun-drenched, sepia-tinged lighting gives Sul (South) an instantly intriguing appearance that goes a long way towards characterising this nine-part series, one of the most ambitious ever to come out of Portugal.

Premiering at the Berlin International Film Festival earlier this year ahead of its domestic debut on RTP, South tells the story of a moody detective investigating the discovery of a series of corpses against the backdrop of the economic recession that hit Portugal and many other European countries so hard a decade ago. On top of that is a Lisbon setting far removed from the picture-postcard landscapes viewers might more readily associate with the city, which only adds to the appeal and charm of the show.

“South comes from the desire to bring a film noir narrative to the city we live in and we love, Lisbon,” explains showrunner, co-writer and executive producer Edgar Medina. “It’s a very special and cinematic place, but the series also presents the opportunity to discuss the effects of the recent financial crisis in the country and tell a story about a police inspector who is disappointed with life until he becomes interested in an apparent suicide case. It starts unravelling a story of crimes motivated by financial and economical reasons.

“It is also like a trip into the darker side of Lisbon. South is an attempt to bridge the world of cinema and TV and create a high-quality international drama that belongs to a specific place, a Mediterranean country, and a topic that is very recent.”

The show’s music is provided by Portuguese band Dead Combo, adding a folksy, western-inspired layer to the series and reflecting Lisbon’s mellow nature. It’s here that Humberto, a seasoned detective, must fight corruption and track down a serial killer over a long, hot, paralysing summer.

Set in July 2013, the show opens with the discovery of a female body on a dock beside the River Tagus. Nihilistic and socially awkward inspector Humberto begins the inquiry into her death.

As the country faces meltdown, both economically and meteorologically, and the government teeters on the brink of collapse, more young women are discovered murdered with increasing brutality. Humberto’s search for the truth leads him to uncover an economic and political conspiracy, all while facing up to his disenchantment with his job and his failure to maintain a family.

Produced by Arquipélago Filmes for broadcaster RTP and distributed by Latido Filmes, the crime drama is directed by Ivo Ferreira, who previously teamed up with Medina on 2016 feature Cartas da Guerra (Letters from War), which was screened in competition at Berlinale the same year. This is his first TV series.

“I’m from Lisbon and this is a visit to a world and to a sombre country that is not seen by tourists. I was enthusiastic about the idea because we could actually work together to get an amazing cast and crew to do this,” Ferreira says. “It’s a portrait of the country on a personal level. We’re almost trying to understand who we are. It’s a detective story and it’s very Portuguese in the sense that it’s melancholic. So it was funny to touch on this in a TV series.

“It’s been very challenging. I joined the project later on but I knew Edgar and knew he trusted me. It was tough and intense but I brought some freshness to it that I wouldn’t have had if I had been working on it for two years.”

Medina, who co-wrote the series with Guilherme Mendonça, says a key reference for the series was life in Portugal during the economic crisis. “We really wanted to capture and portray some of the things we lived through – the disappointment, the way social services treated people, people getting evicted from their homes – and to meet all these new characters that live out of the crisis.”

Luz describes the inspector as an “anti-hero” with a wistful nature. “He’s not a very physical guy, he’s like a philosopher. The mood of the series brings us to a feeling of sadness that was very strong in the times of the economic crisis.”

As Matilha, Pimentel is a con artist and thief who commits crimes just to survive and goes on to provide some unexpected help to Humberto. “He steals Humberto’s car,” the actor reveals. “He’s got a very strong relationship with his car – it’s like an extra character – and at some point, Humberto and my character meet up and he uses this small-time crook to break the law to solve a crime. That’s how they start this relationship.”

Another figure in Humberto’s life – his “right arm” – is his police partner Alice. “Their relationship is something that attracted me right away because we have a big difference in age,” Zhao says of the role. “It seems weird, and it was interesting for me to explore that. I help Humberto all the time, because I work by the book and I’m young, so I want to do the best I can. I’m pragmatic and firm and strict. Humberto is an old guy – he has experience, he knows what he’s doing and he’s been doing it for a long time. He’s not a patient guy at all. So we find each other in that difference.”

With 80 locations around Lisbon featuring in South, the creative team were clear in their approach to shooting the Portuguese capital. “People will recognise the city but there’s something different,” the director notes.

Actor Pimentel adds: “Nowadays you see this public Lisbon that is very touristy, but this isn’t what you see in the series. It’s more the Lisbon that we know. For the people who live there, it’s nostalgic. It’s really organic, it’s really cool.”

But while the location might seem eerily alien to outsiders, the genre and the screen trope of the disillusioned cop are familiar around the world. South, says Medina, is a universal story that becomes unique through its sense of place and time.

“Portugal is a small Mediterranean country so the series brings out our culture, music and other small parts of life. At the same time, the show also has a very crude sense of humour. It is a serious crime drama but it doesn’t take the characters too seriously. They make lots of errors, they do silly stuff.”

That the series was screened in Berlin is proof South stands alongside the top-quality TV dramas now being produced around the world. All eyes will now be on Portugal to see whether the country can follow Spain’s footsteps in establishing itself as a storytelling force on the international stage.

“We come from a very small country that doesn’t have the institutions that are able to support these kinds of projects,” Medina says. “So it’s very hard. We’ve started bringing TV series to the international stage, but we’re not trying to make a series like [US crime procedural] CSI. The only way you can be successful in the international market is if you bring something that is genuine and unique. This is a starting point.”