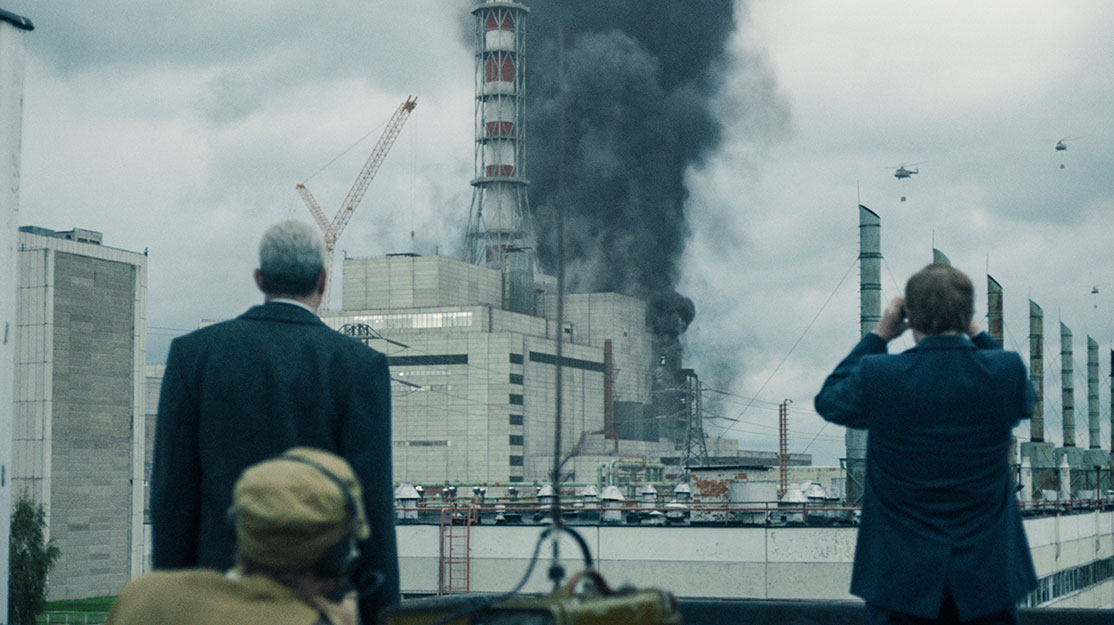 The cast and crew of Chernobyl, a five-part miniseries from HBO and Sky, reveal how they told the story of the infamous Ukrainian nuclear disaster that continues to affect thousands of lives more than three decades on.

Thirty-three years ago to this day, a routine safety test at a power plant in what was then Soviet Ukraine sparked the deadliest nuclear accident in history.

Beginning with an explosion in a nuclear reactor in the early hours of April 26, 1986, the Chernobyl disaster officially claimed 28 lives directly and led to a further 15 indirect deaths – although other estimates put the actual death toll from the accident and its ongoing impact in the tens of thousands.

Whichever end of the scale is more accurate, one thing is beyond doubt: as bad as Chernobyl was, had the spread of radiation not been contained, things could have become much, much worse. That they did not was down to the bravery and brilliance of a number of people in the days and weeks following that first explosion – and it’s these individuals who take centre stage in Sky Atlantic and HBO’s miniseries about the tragedy.

The five-part drama, simply titled Chernobyl, debuts in the US on May 6 and then in the UK on May 7. Made by Sister Pictures and Mighty Mint Production, the HBO and Sky copro is directed by Johan Renck (Breaking Bad) and distributed by HBO International. It covers the dramatic events of the disaster itself and the repercussions on both a global level and for the people of the nearby town of Pripyat, combining disaster movie elements with political intrigue and personal trauma.

It has been created by Craig Mazin, a writer best known for his work on comedy movies such as Identity Thief and the latter two instalments of The Hangover trilogy. So what drew someone with a track record in humour to such a serious and historically significant project?

Mazin, who also wrote and exec produced the show, explains that the lure came more from what he didn’t know about Chernobyl than what he did. “I kind of knew something about Chernobyl but I didn’t know much. I knew that it exploded. I often say to people, if you ask someone what happened to the Titanic, they will tell you it sank; and if you ask how it sank, they will tell you it hit an iceberg. That only works halfway for Chernobyl – if you ask someone what happened at Chernobyl, they’ll say it blew up. But ask them how it blew up…”

Reading up on the subject to fill this “surprising gap” in his knowledge, Mazin found himself increasingly fascinated by the full extent of the disaster, becoming “obsessed” with Chernobyl. “The more I read, the more shocked I was that the explosion is not at all the story,” he says. “The story is, in fact, about how it came to happen and the remarkable acts of courage, bravery and sacrifice that were required because of it. It’s about a system that’s corrupt; it’s about the worst that humans can do but it’s also about the best that humans can do individually.”

Mazin acknowledges he had to consider the massively varying estimates of the tragedy’s true human cost, scoffing at the improbably low death toll arrived at by the Soviet government. “The best estimates put the numbers somewhere in the many tens of thousands. There are estimates of up to a million,” he says. “But if I have a choice between going for something that sounds more dramatic or something that sounds less dramatic, I actually try to opt for less. Because what is dramatic about Chernobyl doesn’t need anything extra.

The individuals highlighted in the drama are a mixture of real-life figures and fictional characters created as an amalgamation of multiple real people. Among those playing historical figures are Jared Harris (The Terror, Mad Men) as Valery Legasov, a leading nuclear physicist who was tasked with steering the immediate response to the disaster. Prolific movie actor Stellan Skarsgård (Good Will Hunting, The Girl with the Dragon Tattoo), meanwhile, is Soviet deputy prime minister Boris Shcherbina, who leads the government commission investigating the accident.

Paul Ritter, best known for his comedic work in series including Friday Night Dinner and No Offence, portrays Anatoly Dyatlov, the deputy chief engineer at the Chernobyl nuclear power plant and the man who would ultimately take the blame for the disaster.

Among the great many other actors in the accomplished cast – Chernobyl features a whopping 102 speaking roles, according to Mazin – are Harris’s The Terror co-star Adam Nagaitis and Oscar nominee Emily Watson. Nagaitis plays a fireman who is one of the first responders to the explosion, while Watson is a nuclear physicist battling to impress the gravity of the situation upon a range of politicians with their heads firmly in the sand.

Harris’s Legasov finds himself in a similar position, with the actor describing his character as the “Cassandra of the story,” referring to the Ancient Greek mythological figure who was cursed to deliver prophecies that were true but were believed by no one. “He understands what the dangers are and how bad it can go if they don’t get on top of it quickly,” he says. “He’s also responsible for trying to figure out how you contain this event where it’s known that it could happen but no one’s planned for what to do if it does happen.”

While the miniseries’ Legasov “suffers the same fate” as the real scientist – taking his own life on the second anniversary of the disaster while suffering from the effects of radiation exposure – Harris says the drama’s version is “more structured towards our narrative and our story.”

He continues: “He sort of plays off Stellan’s character. They have this frosty, antagonistic relationship in the beginning but they learn to rely on one another and trust one another, and their friendship becomes one of the spines of the whole story.”

The visible impact of Legasov’s radiation poisoning was achieved by the make-up department, led by Daniel Parker. In this respect, however, Harris got off lightly, with other actors displaying the full extent of radiation’s horrific effect on the human body throughout the drama.

“Adam Nagaitis had it worst of all,” Harris asserts. “The process they put his character through was really, really gruelling.”

“Daniel had to become almost a physician,” says Mazin, “because it wasn’t enough to say, ‘Well, someone is experiencing the effect of radiation.’ There are levels to it. He came up with these stages and sub-stages, and then stages inside of stages.”

The make-up team’s efforts extended to the creation of a spreadsheet to keep track of the different levels of radiation poisoning even before Parker’s “artistry was put into place.”

This attention to detail was replicated across every element of the production, with Mazin saying he and the rest of the team shared an “obsession with historical accuracy” that went down to “the chandeliers and the tyres on the cars.” Nowhere is this more evident than in the show’s costuming, overseen by Odile Dicks-Mireaux, whose enthusiasm for accuracy sometimes went further than the drama could follow. From the lead cast to the most minor of background roles, everyone on screen is dressed in authentic garb from the era.

“We had to occasionally negotiate with her because she was so ferocious about accuracy,” Mazin notes. “She and her staff gathered up actual period clothing from all over Eastern Europe. She clothed thousands of people – it was mind-blowing.”

But how do you ensure accuracy when recreating the particularities and scale of a nuclear power plant? It turns out nothing beats the real thing, with the production gaining access to Chernobyl’s ‘twin’ station, the Ignalina nuclear power plant in Lithuania.

“It was difficult,” Mazin says of filming in the station. “For Lithuania to gain entry into the EU, they had to agree to decommission that plant. So they are currently in the process of decommissioning it. They mentioned at some point they had already decommissioned it, yet we couldn’t shoot one day because they were removing stuff out of it.

“It’s not a normal shoot day when you show up at work and hand your passport over, and they keep it. It was pretty intense and very eerie.”

Renck, whose direction has given the series a distinctly cinematic feel, echoes the writer’s view: “The building is massive, it’s eerie, it’s windowless. Every time we went back, I felt the same. Everything is preserved. It’s the sister plant to Chernobyl and everything was built around the same time, so everything in there puts you quite close to what would have been [in Chernobyl].”

“The size of it is astonishing,” adds Mazin, who also visited the real Chernobyl site as part of his research. “These buildings were enormous. The thought that something inside could turn on you just seems beyond the pale.”

One area in which the show does abandon its pursuit of total accuracy, however, is language. The actors speak entirely in English and without accents, wisely avoiding evoking audience memories of any number of dodgy attempts at Russian accents by Hollywood actors down the years.

Of the decision to film in English, Mazin says: “It’s a little tricky when you’re thinking about making a show in a language that isn’t local to you, in part because you then have to ask about performance. If we are to make it in another language, we are narrowing ourselves to people who speak that language, and we don’t. So right off the bat there’s a disconnect. Not only did we feel we wanted to get performances and performers we could connect with, we didn’t want to mess around with accents either.”

Actors were told to “speak in a way that felt natural to you, because in the end the language should disappear.”

This miniseries is not the first time Chernobyl has been examined on screen, with numerous documentaries being made on the subject. There was even 2012’s risible horror film Chernobyl Diaries, in which American tourists visiting the exclusion zone around the plant find themselves pursued by mutants. However, it is the first time the true story has been dramatised on this scale, with a significant budget evident from the off.

“I’m shocked that we were able to do it at all,” Mazin says of bringing the financing together. “Given what we had to face, it was remarkable. We started with HBO, but then it became clear that this was bigger than any one network. So we reached out to Sky and they rescued us, they really did.”

With the debate around the environment and climate change reaching fever pitch in London this week with mass protests organised by Extinction Rebellion activists, Chernobyl feels particularly timely, highlighting one of the worst cases of the man-made destruction of our surroundings.

But for Mazin, the most important thing about the show is that it tells the stories of those who sacrificed themselves to save others. “I hope that people will understand how just a handful of human beings, and then hundreds of thousands of human beings, gave up themselves for all of us,” he says. “Telling their stories is one of the great joys of this.”