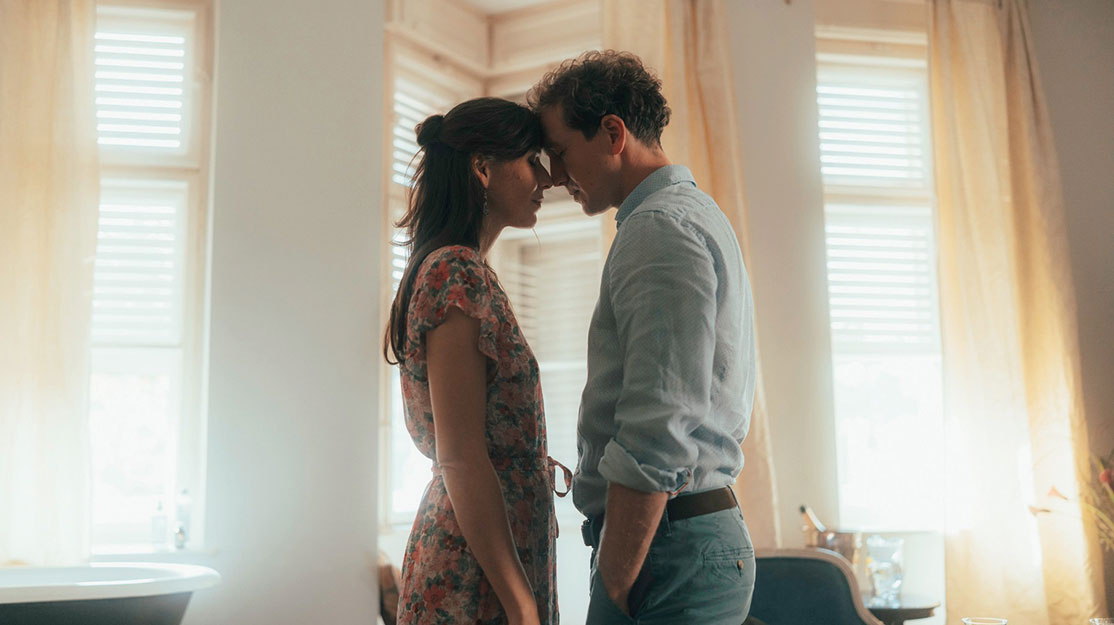 Downfall director Oliver Hirschbiegel is one of six directors to contribute episodes to German series Strafe (Punishment). He tells DQ about his love of anthologies, stepping into writing and why television needs unique filmmakers.

Oliver Hirschbiegel is in Rome, taking a break from an 88-day shoot for his latest TV project, Sky Italia’s Unwanted. It’s a piece of work the German director describes as “classic Hirschbiegel” – working with an ensemble cast and an often confined and claustrophobic setting – and it’s not hard to see why.

The story concerns a group of shipwrecked refugees from Africa who are picked up by the crew of a cruise ship. Filming has involved building long, narrow corridors, restaurants and the captain’s bridge. “We had three major sets in Rome, including 18-metre-long corridors. We built the whole bridge, which was 35 metres wide, then we shot on an actual cruise ship for four weeks,” Hirschbiegel says. “We have another three days of shooting in Rome and then we shoot for two or three weeks in Africa for the flashbacks.”

Hirschbiegel likens Unwanted to Five Minutes of Heaven, a 2009 film starring Liam Neeson and James Nesbitt, owing to its focus on complicated sociopolitical issues and themes of guilt, duty and responsibility. “This is the same but it’s a series,” Hirschbiegel says of Unwanted, “so it’s aiming to be suspenseful and entertaining at the same time as talking about a very important issue. I just go for the stories I find fascinating.”

Discussing how he arrives at his visual style, the filmmaker says he doesn’t have a specific approach. “I don’t know really, I just follow the content and the content defines the form,” he says. What he does know is that he likes to approach scenes from a character’s perspective – asking what they need, what they want, what defines them – with a mixture of long takes, long shots and close-ups.

Those techniques are certainly present in Der Taucher (The Diver), Hirschbiegel’s latest TV work, which forms one entry in Strafe (Punishment), an anthology of six short films based on stories by Ferdinand von Schirach. The films all highlight themes of punishment, guilt and justice, told in different genres, including marital drama, psychological thriller and crime. Each is helmed by a different German director, with Hirschbiegel being joined by Helene Hegemann, Mia Spengler, Patrick Vollrath, Hüseyin Tabak and David Wnendt.

Produced by Moovie for streamer RTL+ and distributed by Wild Bunch TV, the series launches locally in June after two instalments – The Diver and Tabak’s Der Dorn (The Thorn) – had their world premieres at French festival Canneseries this spring.

“I took it much further in The Diver,” Hirschbiegel says of directing the episode, which features wide shots of the Bavarian landscape and still close-ups of the characters. “It’s what I like to watch. I don’t like too much cutting. I want to be with the characters and to be able to focus on what’s really going on. I like to be forced to watch and listen. The more you cut, the less you’re forced to do that and everything is done for you. The Diver is what I really like to do.”

Set in a deeply religious community in Bavaria, The Diver tells the story of an unusual fetish that leads to death. When Claudia (Katharina Hauter) is arrested on suspicion of murdering her husband Andreas (Jan Krauter), she is forced to confront the circumstances in which she found his body: lying on the bathroom floor with a noose around his neck in an act of sexual gratification gone wrong. Claudia tells the authorities that she cut him loose and then moved him to the bed before calling the doctor, but is that the whole truth?

The idea of turning von Schirach’s stories into an anthology series came from Moovie founder and executive producer Oliver Berben, who approached various directors to pick one story with a view to adapting it for TV.

“I never write so, for me, it was like, ‘Are you sure you want me to write this?’” Hirschbiegel recalls. “He said, ‘You can do it.’ I wasn’t so sure. Then because I was afraid of doing it by myself, I asked Bernd Lange if he could be my co-writer, but in this case as more of a coach.

“The writing went really well, to my surprise. It was very fulfilling. At a certain point, Bernd said, ‘This coaching thing is one thing but I have to write something as well otherwise I can’t have this credit,’ so he did write bits of the lawyer talking to Claudia.”

Von Schirach’s original story was told in just a handful of pages, meaning the writers had to unpack his condensed writing style and twist his words into a half-hour TV episode. Hirschbiegel also made some additions, such as including Claudia’s drawn-out struggle to move Andreas’s body from the bathroom to the bed.

“In films, people move dead bodies around as if they’re nothing. But if you ever try it for real, even with a living person, it’s almost impossible,” Hirschbiegel says. “You either need help or you have to be very inventive, as she is.”

All the stories in Punishment are very different, from a museum guard who falls under the spell of a marble statue to a woman’s attempt to escape a toxic relationship. But none of the directors spoke to each other about their individual projects until after filming was completed between July and November last year. The films were all set around Berlin, Bavaria and North Rhine-Westphalia.

As a writer, Hirschbiegel found himself immersed in the world of the story and its characters, adding notes about specific images he imagined and wanted to recreate on set. “As I hardly ever write, it’s hard for me to talk about myself as a writer,” he says. “It irritated me how well it worked. When you’re directing, usually if there’s a problem, if something doesn’t quite work out, it’s in the writing. If it’s easy to direct something, if things fall into place with a nudge here and a nudge there, you know you’re dealing with good pages, which luckily happened to me on Unwanted. It’s a 96% watertight script – and that was the same with me here, so I’m thinking I should do some more writing.”

Hirschbiegel found the key to writing The Diver was its structure, with the story unfolding across Easter weekend. Numerous scenes take place inside a packed church, and the director attended several real-life services where he noted the church would be shrouded in darkness on Good Friday, only to be full of light come Easter Sunday.

“There’s a similarity between that and what happens to my character and everything she goes through,” he says. “Then, of course, Germany in my eyes is such a unique and strange country and it’s hardly ever depicted the way it is. I thought I’d give it another try with some German realism, especially in the countryside, which is beautiful but there’s something very scary about it at the same time.”

The stunning Bavarian backdrops are nearly as important to The Diver as Hauter, on whom the camera is almost exclusively trained as Claudia deals with her struggling marriage to a seemingly depressed Andreas, the discovery she makes after returning home and her subsequent journey through the German judicial system.

“She’s a brilliant actress,” Hirschbiegel says of his lead, who has previously appeared in Tatort and Die Protokollantin (The Typist). “I didn’t have to tell her that much, really. I auditioned many big-name actresses, but I’d never seen Katharina. Then I saw her reading and I knew she had it. It was her. It was the way I envisioned it, which sometimes happens. I was lucky, she was lucky, and then we just collaborated on such a beautiful level. It was a very beautiful shoot.”

Whether it’s helming a single instalment of an anthology or shooting all eight episodes of a series, as with Unwanted, Hirschbiegel doesn’t believe the practical role of a director is changing amid the continuing TV drama boom. What is changing, he believes, is the importance of having a director with a singular vision or artistic style that can make a show stand out in such a crowded landscape.

“Smart streamers and networks are starting to understand that if they want something unique and not just more of the same, they need filmmakers,” he says. “That’s what some of my colleagues and I have experienced lately. Sky, for example, is very collaborative. It was very important for them to have me on board and develop this with [writer] Stefano Bises. There was a lot of input coming from my end that Stefano appreciated. That’s how good shows are generated.

“Apple also say they want people like me with their own voice. If you look at what they’ve done lately, I’d say it pays off because they do interesting shows – the most interesting shows. Not all of them work, but there’s a sense of being sharp in choosing and then trusting the vision of a filmmaker. That’s good for the future, not just for directors but for the audience because we create things that are a little different and, in the end, that’s what the audience wants.”

As such, Hirschbiegel particularly enjoyed making The Diver, which he describes as “a bit off the grid.”

“I love anthologies. I hope it works because I’m a total sucker for them. There should be way more,” he adds. “It’s like when you go to school in Germany, you get bags with lots of surprises in them – Schultüte. Anthologies are like that. You know the basic frame but you never know what you’re going to get. You hit the button and just go, and there’s always something new with different people. I love that. I hope it works out.”