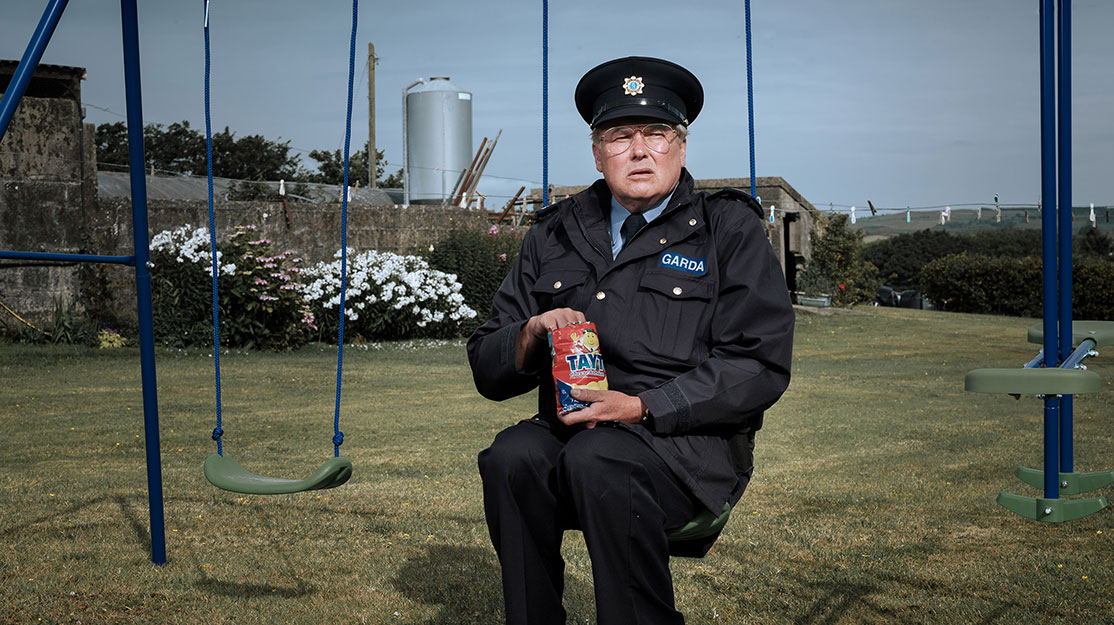 Getting to grips with Holding

A staple of British television for more than two decades, Graham Norton is best known as a talkshow host, comedian and television and radio presenter. But since 2016, the Irishman has also written three bestselling fiction novels set in his home country.

The first of those, Holding, has now been adapted for television as a four-part series, which begins on ITV in the UK tonight. Set in the insular fictional village of Duneen, West Cork, it stars Conleth Hill (Game of Thrones, Dublin Murders) as local police officer Sergeant PJ Collins, a gentle mountain of a man, who hides from people and fills his days with comfort food and half-hearted police work.

When the body of long-lost local legend Tommy Burke is discovered, PJ is called to solve a serious crime for the first time in his career and faces the prospect of having to connect with the village he has tried hard to avoid.

Directed by Kathy Burke, the series is described as a darkly comic tale that blends murder mystery with the minutiae of rural Irish life. It is written by former EastEnders executive producer Dominic Treadwell-Collins (A Very English Scandal) and Karen Cogan (The Young Offenders) and produced by Happy Prince and Port Pictures. ITV Studios distributes the series internationally.

Here, Norton, Treadwell-Collins, Cogan and Burke discuss the making of the series and how the drama goes beyond the original novel.

How did the adaptation come about?
Norton: I knew Dominic because of EastEnders; we did an EastEnders special on my chatshow. We stayed friends because we have a West Cork connection – we both have homes there – and very early doors Dominic said he was interested in adapting the book. There was nothing to make me say no. You would just say yes, so I said yes.
I was very clear that I didn’t want to do the adaptation. That’s a skill and that’s a job that other people are able to do. I also felt like I’d had my time with those characters. I’ve loved this experience because I’ve had nothing to do, and I’ve just been able to watch what’s happened. I thought I might feel weird about it; I thought it might be an odd thing, but actually I’ve loved seeing the direction the characters and the story have gone in and the way the world has opened up and become larger.

Treadwell-Collins: I’ve always loved a whodunnit and to suddenly read this book that was so brilliant, was a whodunnit and was set in an area I knew, it was a no-brainer. I drove out to Ireland and auditioned for Graham a bit. That was about six or seven years ago. I’ve had this book with me for a long time. I tried different people at adapting it and then my uncle said to me, ‘You should adapt this yourself.’ I wrote the first episode and then I was working with Karen on something else. I said to Karen, ‘Have a look at this, have a look at the book, have a look at my script,’ and we jumped in together.

What changes have been made to the story or characters in the book?
Treadwell-Collins: Quite early on, Graham said, ‘Do what you want,’ which was freeing.

Norton: I wrote the book so long ago so, when it came to it, I didn’t remember the characters at all. When you say, ‘Did you make major changes?’ I don’t know. I feel like there’s more people in there. I do know the story has changed. People who read the book and enjoyed the book will be able to follow the thread of their story through it. But then there’s all these other great adjuncts, subplots and red herrings that Karen and Dominic have done so brilliantly.

How did you translate the nuances of the characters and the world the story is set in?
Cogan: That was really important to me and Dom, being bold about hanging on to the nuance and the minutiae of these characters. Telly eats story – you need plot, plot plot. But the joy of this book from day one was the people. It was really important to us that we spend time with them in the smaller moments, as well as the big, crimey beats that are vital to drive us along. We wanted to spend time in people’s kitchens and their bedrooms and have those alone moments for the women, specifically, and PJ. Those private moments you don’t always get the luxury of in telly were really important. We fought for those. We didn’t have to fight very hard, but they were really important to us.

Kathy, how did you come on board?
Burke: Usually I say no to telly directing. I’m predominantly a theatre director – that’s what I love and what I’ve been doing mostly for 20 years. I’ve always said no to any TV projects coming in. But because of the pandemic, I’d listened to the book. I listened to Graham read Holding during lockdown and I really enjoyed it. When my manager got in touch and said Dominic Treadwell-Collins wants you to have a look at this TV project, I said no immediately. Then I said, ‘Well what is it?’ And he said it’s Holding by Graham Norton. He said it is quite different, making more of the women. And I immediately said, ‘Well, that’s great, but hopefully not to the detriment of PJ.’ I was curious. It was curiosity that killed the cat.

How did you work with the cast?
Burke: We were lucky that we had a couple of rehearsal days. That’s what I do when I do a play; it’s where you get to know everyone and tell stories, because we’re in the business of storytelling. When I’m in the room with people, I want to know, ‘Well, tell me about you then. Who are you and what do you feel about this?’
It’s also about allowing actors to talk about characters that aren’t their own character. When I used to work as an actor, it seemed very much like you just talked about your own character. You didn’t really give an input on anybody else. I find that quite ludicrous, really, which is one of the reasons I wanted to stop being an actor. I thought, ‘This is so fucking boring.’ I want to be in a room and everyone chats, because an hour can give you two minutes on screen that is so fizzy, spicy and exciting just from an open conversation. That’s what I really loved about this, about being allowed as a director to have that time with these wonderful people.
I am Irish, my blood is Irish, but I am going to sit back and listen to people like Karen, Pauline [McLynn, who plays Eileen O’Driscoll] and Helen because they know more about the roots in the soil of Ireland than me. Then a few weeks later you say, ‘Remember that bit you said when we sat round the table? Just think about that when she’s doing this.’

How does the setting of West Cork influence the characterisation and the story?
Cogman: Deeply. It was in the book and in Graham’s sensibility and understanding of the place. The juxtaposition of the dark and the light is also inherently Irish, but inherently Cork. It’s a place of tons of contradictions. It’s so progressive and cosmopolitan and global and, at the same time, quite traditional. As soon as we got there, we were like, ‘Oh, we’re in the right place.’ Every new location was so exciting to walk into.

What kind of tone did you want for the show?
Cogan: We did talk about the Coen Brothers [Fargo] a little bit. It goes back to that dark and light. But I think a huge amount of that is Graham. Visually, we did talk about the Coen brothers and [HBO’s 2014 miniseries] Olive Kitteridge and bleak, expansive yet small-town drama. We talked a lot about the tone and hitting the right one. Graham had done a huge amount of the work for us.

Norton: The only note I ever gave was that whenever I felt it was too Irish, where the Irishness was overt on the page, I was going, ‘No, you’ve got Irish actors filming in West Cork. It’s Irish enough. We get it.’

Burke: We all know Graham Norton, and there is a warmth there and great humour and great love. So half the job is done. I read episodes one and two and thought the writing was so terrific the way they’d adapted it and the way these characters just jumped off the page. I really loved what they did with the Ross sisters – Evelyn [Charlene McKenna], Florence [Amy Conroy] and Abigail [Helen Behan]. I thought they’d just made them three-dimensional women, which is so rare.
The other great thing was having Bríd [Siobhán McSweeney] and PJ as our leads. Even though it’s very much an ensemble piece, they’re who we’re following on a romantic level – and people like Siobhán and Conleth are not usually the leading actors. They’re usually the supporting actors. It never happens, but with Holding, it’s happened. It’s just wonderful and made me very chuffed these were the people Karen and Dominic wanted from the off. That’s what brought me in. I’d be foolish to say no to this.

Graham, what surprised you about seeing the television adaptation?
Norton: The biggest change was in the Ross sisters. My Ross sisters were much more constrained and they’ve been fully developed. Those three women now, each one of them could have their own show, we know them that well and they’re not like that in the book.
One of the things I really enjoyed about this adaptation is my book is a genre book. It’s cosy crime. There are lots of books like my book, and what Karen and Dominic have done is they’ve made a TV show that isn’t like other television shows. Its tone and its feel is entirely its own, and that is so hard to do because everything’s a bit like something else. They’ve really elevated the book in that sense.