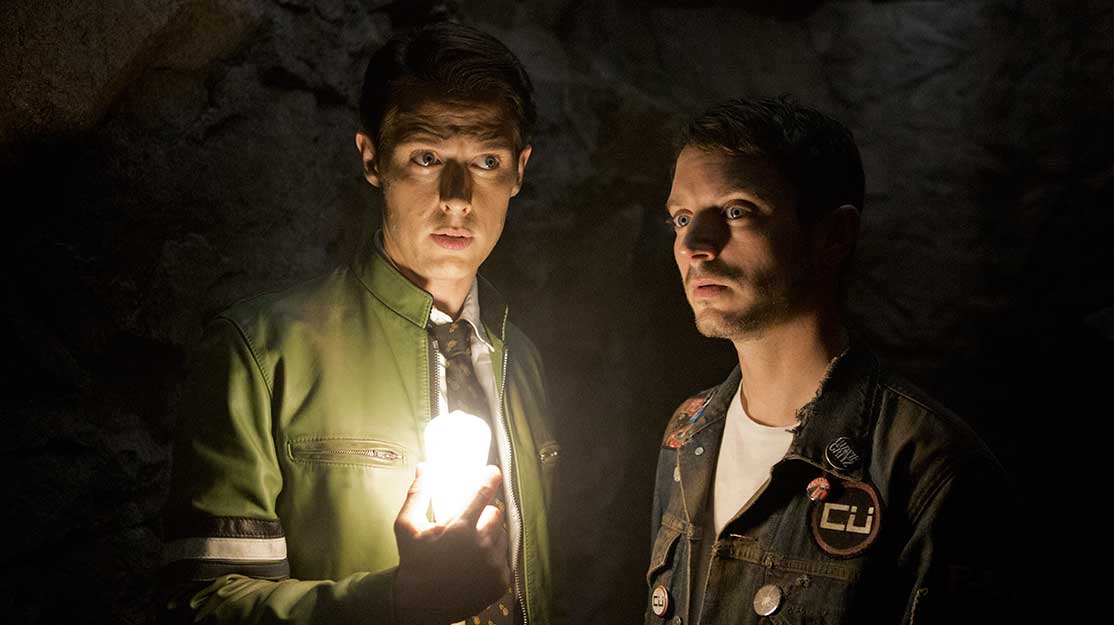 Step aside, Sherlock. Dirk Gently, the star of BBC America’s latest original drama, is turning the detective genre on its head.

When Sarah Barnett became president of BBC America (BBCA) in November 2014, she quickly identified the need for an original drama that could stand alongside the network’s established big hitters – namely Doctor Who and Orphan Black.

Just under two years later, she is overseeing the launch of Dirk Gently’s Holistic Detective Agency, an eight-part series based on Douglas Adams’ novels about eccentric ‘holistic’ detective Dirk Gently and his reluctant assistant Todd.

Created by Max Landis, the first season opens as Todd discovers the scene of a gruesome murder – kickstarting a chain of events that sees him team up with the fast-talking Gently to investigate the case and meet a collection of wild and dangerous characters.

“Dirk Gently was a no-brainer for us,” Barnett says of the comedy thriller. “It’s so fresh and different – all the things we’re looking for at BBCA. Douglas Adams is like royalty and it’s fantastic source material. I was really bowled over by Max’s interpretation of it.

“You cannot slavishly adapt it but to take the heart of Adams’ bonkers, brilliant version and interpret it in a way that’s unique and fresh is brilliantly cool. For us, that added up to a belief that shows on this network should be smart, have depth of character and be immersive. But they also shouldn’t take themselves too seriously. Doctor Who, Orphan Black and now Dirk Gently all have that wit and character that’s fun and super entertaining.”

From its title and the budding relationship between Dirk and Todd, viewers might expect a new take on the dynamic that has served Sherlock Holmes (Benedict Cumberbatch)and Dr Watson (Martin Freeman) so well in Sherlock, the recent revival of the legendary detective story, which also airs on BBCA in the US.

However, audiences will soon discover that Dirk Gently is about to turn traditional detective stories upside down. “The thing about Dirk is that, unlike Sherlock or Miss Marple or any other detective, he is singularly bad at being a detective,” explains executive producer Arvind Ethan David. “He’s not a genius, he’s not physically brave, he’s not good at clues. He is funny, absurd and overly dramatic, but what makes him truly unique is he has an innate, almost paranormal sense of the connectedness of all things.

“This means you’re not constrained by the limits of the possible. In season one, you think you’re in an ordinary murder investigation after the death of Patrick Spring, but what’s unusual is that Dirk was hired by Patrick six weeks before his death to investigate his murder.”

For David, the launch of Dirk Gently last Saturday (and later this year on Netflix around the world) brings his relationship with Adams’ novels full circle, having adapted the story for the stage both at school and later during his time at Oxford University. The latter version starred Rory Kinnear, now known for roles in Penny Dreadful and the James Bond films, and cemented David’s friendship with Adams.

“We did it as a school play and I knew it was something special, so we did it again when I was at Oxford, bigger and better,” he recalls. “That was the one [Adams] really liked and was when our friendship started. It also starred Rory, who has just finished on Penny Dreadful with Samuel Barnett, who plays our new Dirk.”

Thirteen years after Adams’ death in 2001, the author’s estate asked David if he would consider rebooting the series, following an earlier adaptation for BBC4 in the UK.

“Each season is one case but there’s a bigger mystery around Dirk, who he is and where he comes from that will be explored across multiple seasons,” David explains. “That’s what I’ve been waiting for in terms of my career. I wasn’t going to return to Douglas’s work until I felt there was a way to do him justice and I think American cable television is the place to do that.

“You get to tell a detailed story with tonnes of digressions and tonnes of interesting characters. We have something like 20 lead cast members in this season. It’s not quite Game of Thrones scale, but it’s pretty close!”

Cooper, whose credits include Stargate Atlantis and Stargate Universe, came on board to help steer the production and develop Landis’s take on Adams’ characters.

“Dirk Gently was just so incredibly different,” says the showrunner, who was looking for a new project to join when Landis’s script came across his desk. “It was so unique and defied definition in so many ways. It’s indescribable – it’s a thriller, it’s a character drama and it’s funny.

“I loved Max’s voice – it was energetic – and there’s a real pull to doing a short run of episodes. It feels like a long movie – one with a heavily surrealist angle.”

But despite the absurd elements of the source material that carry over into Landis’s scripts, Cooper says it was important to introduce these slowly – at least at the beginning – to give viewers time to warm to the characters.

“While this show definitely has some strange things to it, it’s still grounded,” he explains. “Both Max and I wanted people to fall in love with the characters and feel the world was very real, so as it becomes more unusual, we have these characters to hang on to.”

But in particular, it’s lead duo Samuel Barnett and Elijah Wood (The Lord of the Rings), who plays Todd, to whom the creative team hope viewers will warm as much as they have.

“I cannot imagine other people in those roles,” says BBCA’s Barnett. “Sam and Elijah had this fantastic chemistry. They play so well together. It wasn’t super easy to find our Dirk. We looked for a while but when Sam read, Max said he was the Dirk he had imagined in his head.”

Cooper continues: “From the moment Sam and Elijah were in the room together, we felt there was magic. I have never worked with two people who are so easy, professional and never miss a beat. With so many other challenges, it’s such a pleasure to know the one thing we don’t have to worry about is the leads nailing the dialogue.”

Though the show is packed full of stunts and effects, the other challenges to which Cooper alludes refer largely to the complicated filming schedule in Vancouver, which doubles for the show’s Seattle setting.

“You can bring a certain amount of experience to the table but there are always challenges,” he reflects. “In this case, the show was based in several locations and they were locations that didn’t always recur – and we were doing this in Vancouver, which is incredibly busy [with other film and television productions].

“There’s a tremendous amount of production going on and it’s stretching the capacity and talent in terms of what was doable. There was a point towards the end where Panavision was just out of cameras. You’re literally desperate for crew and it means you pay considerably more.”

David reveals that the creative team wanted to produce a series that celebrated the filmmaking traditions of Terry Gilliam (Brazil, 12 Monkeys) and the Coen Brothers (Fargo, No Country for Old Men) – an aspiration that led to executive producer Dean Parisot, who helmed the hit sci-fi comedy movie Galaxy Quest, directing the first two episodes. Michael Patrick Jann is also on directing duties.

“Dean famously directed Galaxy Quest and one of the reasons I wanted him to do it was that blend of science-fiction and comedy, of serious and absurd, which is really hard to pull off – but Dean has shown repeatedly that he can do it,” David says. “We’re definitely bringing talent to the game. Max is certainly the lead creator but it was important to him and us that we hired the most talented people we could and that everyone’s vision was integrated.”

The absurdist nature of Adams’ writing leads Cooper to admit adaptations of his work – such as the big-screen version of The Hitchhiker’s Guide to the Galaxy – haven’t always been successful, owing to his ideas being “inflammable.” But David, a self-confessed “fanboy” of the author, believes Dirk Gently will have enough to attract those less familiar with Adams’ work.

“We know there’s a specific audience that will turn up for the first few episodes,” he says. “As a fanboy myself, I know we’re making something those people will like. What we’re hoping, though, is that we’ve also made something that has enough intrinsic heart and is funny enough that we won’t be limited to just that community. I’m sure people will say they don’t watch science-fiction but I hope they give us a chance and see we’re much more than that.”

As for BBCA, the network is confident Dirk Gently can break through the vast number of TV shows competing for viewers. “In the intense mountain of content, there’s something smart, moving and really refreshingly different about Dirk Gently and I hope that continues to rub off on how viewers see BBC America,” Barnett notes. “It’s a blend of audacity and pleasure that makes for a unique and entertaining cocktail.”

Cooper adds: “On the surface it looks like a detective show – Sherlock and Watson on a peculiar day – but when people watch, they will see very quickly that it’s something fresh and different, and they’ll have no idea where it’s going.”