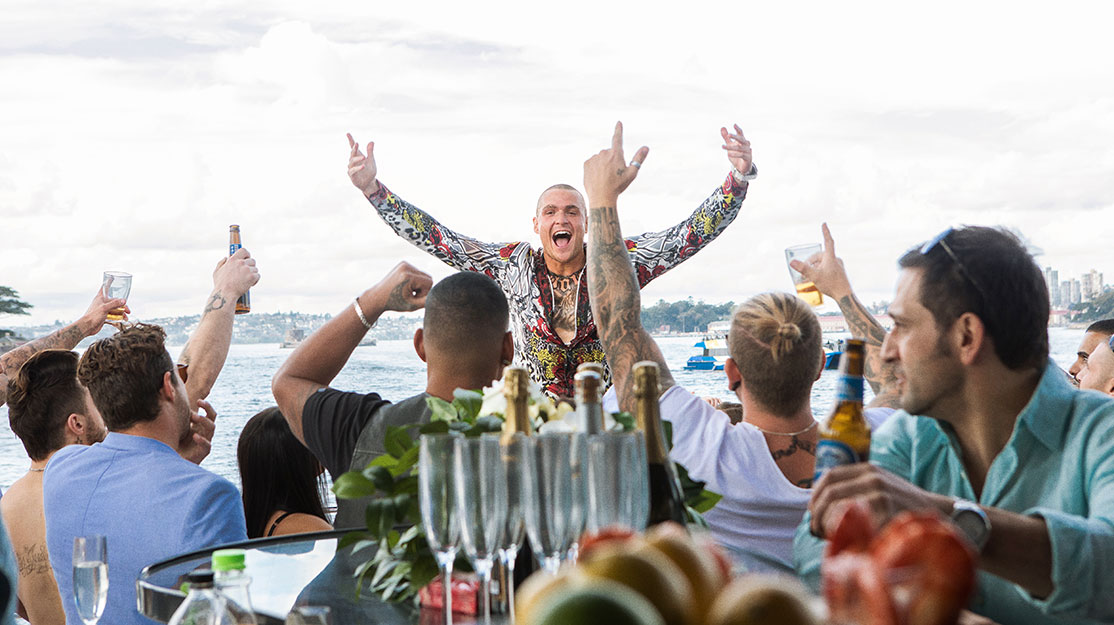 After three years in the can, Australian Gangster has finally aired. Producer Dan Edwards tells DQ about the true story that inspired the intense crime drama, filming in Sydney and finding the miniseries’ star.

By the time true crime miniseries Australian Gangster hit the screen, it had been more than three years since production wrapped and post-production was completed. But with ongoing legal cases relating to the story depicted in the four-hour drama, Australian broadcaster Seven chose to delay releasing the show until those matters had been resolved.

A highly charged, fast-paced and adrenaline-fuelled tale of gangland ambition in the era of Instagram, Australian Gangster depicts Sydney’s underworld clashing with the elite in a story of one man’s bloody rise to the top, his brief rule over a criminal empire and his brutal downfall.

The inspiration behind the story came straight from the headlines in the figure of Pasquale Barbaro, a Sydney criminal with links to the Italian mafia who was murdered in 2016 at the age of 35.

The real-life subject at the heart of the fictionalised series also proved to be a stumbling block for the show, as court proceedings relating to Barbaro’s death ensured the series stayed off air until last month. So when it finally aired, “it was a massive relief,” says producer Dan Edwards.

“We’re incredibly proud of it. When we initially were making it, it was nine or 10 months from Pasquale being assassinated, so it was this very current take on a true crime drama. We were commissioned within weeks. That was what was exciting about it, but obviously it also ended up being the problem.”

Edwards, who runs Australian Gangster producer Roadshow Rough Diamond with his father John Edwards, had originally gone to Seven to pitch a different crime story, told exclusively from the point of view of the police. “It was a little bit like The Wire in the sense that it was actually about a wire-tap investigation on the world’s largest ecstasy haul, which was masterminded by somebody else called Pasquale Barbaro, who is currently in jail,” he explains.

Seven wasn’t interested in that idea, but sitting on the table in the meeting room was a tabloid newspaper that carried a front page story about another Pasquale Barbaro, who had been shot dead in Sydney suburb Earlwood the previous week. He had become notorious for hosting a two-day yacht party where he promised that supermodel Miranda Kerr would be among the guests, and for clashing with rivals at an exclusive Sydney restaurant.

“Seven said, ‘I think that’s our story,’” Edwards recalls, and he then went away to speak to LA-based writer and director Gregor Jordan (Two Hands) about making a series that would cover the broader Sydney gangland wars that were going on from 2014 to 2017.

But as that development work continued, it became clear to Edwards and Jordan that to navigate the story legally, the focus of the series needed to be pulled tighter on “the rise and rise and very quick fall” of Barbaro. “That meant we only had one trial, the trial of the killers of Pasquale, that we had to worry about,” Edwards says. “All the others, we could we could deal with. That clarity in terms of the point of view of the story has worked really well for the series.”

Rooting the series in court-heard facts and media reports, the creative team then set their sights on what kind of ‘Australian gangster’ their Pasquale, a ruthless, unpredictable and uncontrollable character played by Alexander Bertrand, would be. The series certainly plays up the protagonist’s charm, ambition and his Instagram lifestyle – tattoos, expensive clothes and fast cars – rather than focusing explicitly on the criminal activities that help him fund it.

“We knew he was involved in the assassination of Joe Antoun and that he was actually the first person to stake out the hit,” Edwards says. “But when he didn’t do it, his excuse was that his [Antoun’s] kids were with him and that it’s mafia code that you can’t kill somebody in front of their kids. But then he was still pretty involved when his mates went ahead and did the hit.

“We also knew his whole ambition [behind the drug dealing] was getting into construction and getting into the crane business to wash drug money. When we matched that up with Gregor’s sensibility, which is mixing it with the domestic mundane to give it a comedic edge and also to have the pathos of this character’s journey, it felt like the right mix.”

Through the miniseries, elements of Pasquale’s home life and his relationship with wife Melinda (Louisa Mignone) appear like vignettes, as they chat together in a supermarket or follow Barbaro as he deals with a bullying incident involving his child with explosive consequences. They are also left to deal with the fallout from Pasquale putting his young children in front of the television to watch 1980s horror film Child’s Play.

“The other thing is we wanted to have some real female influence in the show, but we had to be very careful,” Edwards continues. “Melinda Barbaro is an innocent civilian in terms of what we know, and Louisa, who plays Melinda, has such a fantastic presence that you wanted to spend more time with her, because it was that influence on Pasquale that made him watchable. Without her, he’s pretty repugnant.”

As Jordan developed the series, which went from eight hours to six and then settled at four as the story was shaped and honed, he and Edwards collaborated with “very high level” former police officers and some newspaper crime reporters to build a timeline of events.

“These people would ring their contacts either in the underworld or in the police and basically confirm or deny some of our lines of enquiry,” Edwards says, noting that their main line of enquiry centred on whether Barbaro was a police informant – something that might have played a part in his death.

“Gregor’s process was really fun. We were making Romper Stomper at the time, which was a very intense shoot, but you read these scripts [for Australian Gangster] and you realise there’s two shootings and a whole bunch of drug dealing – and I laughed from the beginning to the end of the script. Gregor seems to be able to find this real sweet spot with  the humanity, the humour, but also the horror. It’s really enjoyable.”

Central to the series is an electric, intense performance from Bertrand, who viewers might recognise from his recent lead role in 1980s-set drama Les Norton, which was also produced by Roadshow Rough Diamond. That series first aired in 2019, but it was Australian Gangster that marked the actor’s breakout role. It’s because of the legal delays that viewers are only seeing it now.

“We were digging and digging, looking to big names and lesser names. We needed some resemblance to Pasquale, number one, and we were settling on somebody who was a little bit more known at the time,” Edwards remembers of the casting process. “We had one additional test with the casting agent and Gregor and I both saw Alex and said, ‘There’s something about this guy.’

“He really embodied the spirit of the script, which was interesting because you either had people who were exuding a lot of aggression or strictly comedy. Alex seemed to do both. That’s what won him the gig, but it was a real risk. We all held our breath. At the readthrough, we kind of knew. But when the rushes came in, he just blew us away. Australian Gangster was a really exceptional debut and I feel sorry for him that it’s taken three years to come out.”

With the actor featuring in almost every scene, filming the show proved to be an intense experience for Bertrand, who had to hit the gym with a personal coach to match Barbaro’s muscular physique. He would also spend four hours a day having tattoos applied to him by the show’s make-up team.

“Alex Bertrand has to be one of the finds of the last however many years,” Edwards says. “We also had two directors. For the second director, Fadia Abboud [Here Come The Habibs!], it was her first proper commercial gig. She was tagging in and out with Gregor. It was challenging and she just excelled. Then there were lots of fun bits, like taking out a $100m super-yacht and partying on that for the day. What was really fun was having the police lock down streets and tunnels while we zoomed around in the Lamborghini from midnight til six in the morning on a couple of days. It was really fun. Sydney looks really slick.”

While Australian Gangster is the latest addition to the true crime genre that continues to enjoy popularity around the world, it also stands apart as a show with its own distinct tone and style, which is highlighted through its use of humour and the drama’s domestic edge.

Three years after the show, which is distributed by Red Arrow Studios International, was supposed to debut, Edwards says he never doubted that Australian Gangster would see the light of day, but admits “it felt like a lifetime.”

“We’re really pleased it’s out there, not only for Alex but Louisa Mignone too,” he adds. “I hadn’t seen her before and I just think she’s sensational. I hope she goes on to big things.”