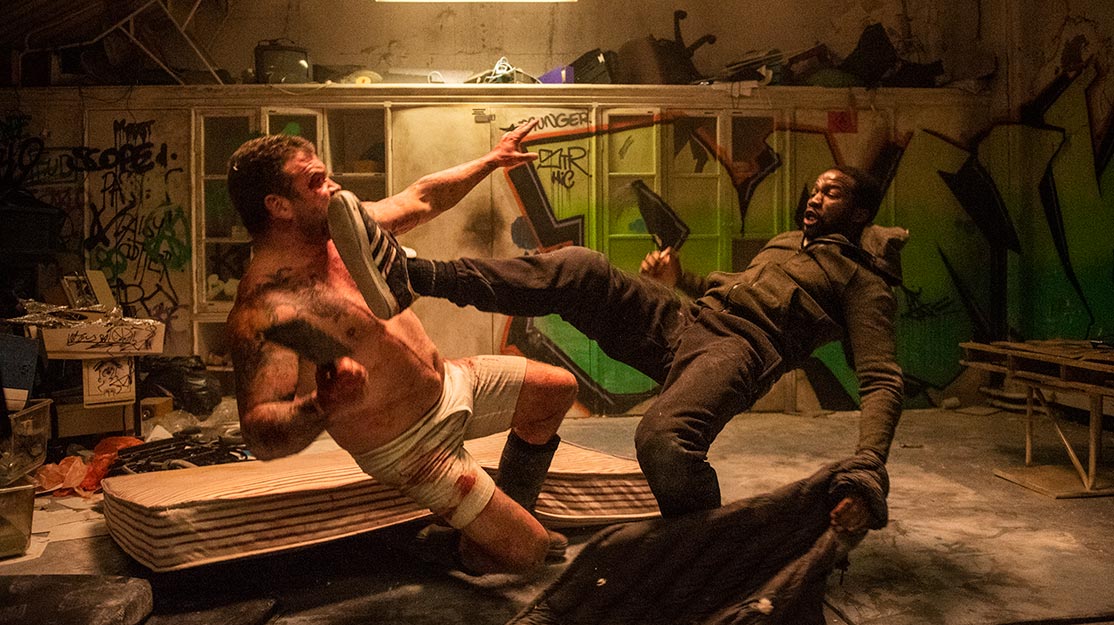 The creative team behind Sky and Cinemax’s explosive original drama Gangs of London discuss how they brought The Raid director Gareth Evan’s action-packed storytelling to television.

Through his film franchise The Raid, Welsh filmmaker Gareth Evans has become synonymous with a balletic brand of action and cinematic fight sequences.

For his first television series, Gangs of London, Evans is aiming to bring those same techniques to the small screen by taking viewers on an immersive journey into the hidden heart of the English capital.

The show depicts a city being torn apart by the turbulent power struggles of the international gangs that control it, with a power vacuum being created when the head of London’s most powerful crime family is assassinated.

For two decades, Finn Wallace (Colm Meaney, Hell on Wheels) was the most powerful criminal in London. Billions of pounds flowed through his organisation each year. But now he’s dead – and nobody knows who ordered the hit. With rivals everywhere, it’s up to the impulsive Sean Wallace (Joe Cole, Peaky Blinders), with the help of the Dumani family, headed by Ed (Lucian Msamati, His Dark Materials), to take his father’s place.

Sean’s assumption of power causes ripples in the world of international crime, leading lowlife chancer Elliot Finch (Sope Dirsu, Humans) to find himself transported to the inner workings of the largest criminal organisation in London.

Gangs of London also marks the first television drama from Pulse Films (Mogul Mowgli, Lost Transmissions), which produces the series in association with Sister (Chernobyl). It is directed by Evans, Corin Hardy and Xavier Gens.

Speaking at Content London late last year, the creative team behind the series offered a glimpse into how it was brought to the screen and the rigorous training process behind its spectacular action scenes.

Lucas Ochoa, Pulse Films’ chief creative officer of scripted film and television: What he’d done with The Raid 1 and 2, if you were interested in action cinema, changed the game. It was very eye-catching. We just started a conversation and what Gareth came back with, after talking about the title, was a wall of family trees. He wrote on the wall the names of these families, the mothers, fathers, sons and daughters, and then the relationships between them and how they’re going to conflict over time.
Because it was such a vast matrix of these different characters with different agendas, television felt like the perfect medium to tell that story. The next step became how that could sit inside a city essentially going to war with itself.

Thomas Benski, Pulse Film’s CEO and co-founder: We all really wanted to do a sophisticated piece of storytelling. The visual style and the action are signature pieces. But Gareth and all of us gravitated to the idea of telling really compelling stories, with fascinating, unusual, diverse characters. He’s not a one-tone filmmaker; he has ambitions to do that, and that’s what we all got behind.

Sky snapped up the project after it was first pitched, with Sister coming on board to back the production…

Jane Featherstone, co-founder and head of Sister London: I’d seen Gareth’s work and he’s an extraordinary talent with an incredible authorial voice. I love television. I love watching movies, but I love making TV. So the idea of him bringing to television that incredible vision he has for thrills and violence, but also the moral complexity that he brings to all of his stories, was really interesting to me.
This is my city. I love London. I really loved getting under the skin of what you don’t see in London. It’s an extraordinarily complicated city but we don’t see it all. This show opened the door to that and I thought that was really interesting. Plus, it’s just really fucking exciting. It’s quite ‘blokey’ – I don’t mean women won’t like it, but I probably don’t gravitate to develop material like that, so I thought it would be a really interesting thing to explore.

Gabriel Silver, Sky commissioning editor: In a sense, it’s typical of what we aspire to do, which is something completely unique. We’re not only competing against all the other platforms and broadcasters, we also want to make sure every one of our shows is a stand-out against other Sky originals. This one absolutely is; it doesn’t take anyone seeing much more than the trailer to know we’re not making anything else like this.
You can talk about being quite niche in terms of the signature action that Gareth and Corin [Hardy, director] bring to it, even in terms of it possibly being quite a male-skewed show, and therefore it fits into a certain action-thriller genre. But it also has deep and broad themes and very strong storytelling. It’s actually quite a universal story.
We worked with [US cable channel] Cinemax on it and I felt like we had very similar ambitions for the show, so there wasn’t much in the way of translation needed. It’s set in London with a mostly British cast, but the themes are universal. It’s also a slightly heightened London – there’s a kind of ‘Gothamisation,’ which American viewers will totally understand.

Although this might be deemed a ‘male world,’ there is no shortage of female characters planning their own power grab…

Claire Wilson, writer: It is a male world and that means the female characters can’t be wallflowers, which was an exciting thing to write. Marian Wallace, played by Michelle Fairley, is the wife of the leader who gets killed in the first episode. We imagine she has taken a back step in her life over the last few years and become more of a silent partner. Then when he dies, she has to reinvent herself and we see this very badass, quite cruel woman appear.
It’s about all the characters finding their identity. One of the brilliant characters is Lale, who’s Kurdish and she runs gangs in London. I don’t think I’ve ever seen a character like her – a female who is driven by revenge and by her wanting to defend her homeland, so she’s very complex and she just won’t give up on anything.
Then we have Shannon Dumani [Pippa Bennett-Warner]. She’s a single mother and you feel there’s something going on behind her. She’s sweet and she’s presented as a nice woman and but, as the story goes on, we start to work out you can’t be the daughter of someone like Ed Dumani without having something behind you. There are really interesting women in this definitely male world, but they’re pushing themselves forward and finding their feet in it.

Like Evans, Corin Hardy is making his first foray into TV with Gangs of London. He dived into the project, which he says is full of emotion, large scale action sequences, surprises and excitement…

Corin Hardy, who directs four episodes: It was a real joy to have such an incredible cast come together with the likes of Joe Cole [Pure]. The biggest discovery to me was Sope Dirisu, who is not only an incredible actor who’s come from a theatre background, but he also had to train rigorously under Gareth’s regime with his stunt team to pull off the action in this, which a lot of the cast did but particularly Sope.
It’s all in camera and it’s done for real, which is really something to behold. Then with Michelle Fairley, Lucien Msamati and Nargis Rashidi, it was important to balance the tone and know could make a show that was grounded and based in a real version of London, but heightened in such a way to bring an epic cinema to it.

Ochoa: Because the show is so vast, directors could bring their own sensibilities to bear on different aspects of the series. We wanted it to be a very free environment for people to be able to do that. They all brought something individual to it.

For Evans, action is character. But the set pieces in Gangs of London also had to be unlike anything ever seen on British television…

Gareth Evans, co-creator, writer and director: Having come from a film background, particularly the action genre, one of the biggest challenges was to seamlessly translate things I’ve learned in action filmmaking and then fit them into what is ostensibly a much tighter, leaner British television schedule.
From the moment myself and co-creator Matt Flannery first met with the guys at Pulse Films and then later with Sky and HBO, we were encouraged to take bold decisions and not restrict ourselves in terms of scale and ambition. When it came to designing the action sequences alongside stunt coordinator Jude Poyer, the remit was clear: it had to be unlike anything else seen or attempted before in British television.
We spent months designing and shooting the large-scale action set pieces that make up this inaugural season of the show. Not only was I fortunate enough to have the benefit of a remarkably gifted action team, but we landed on our feet with the casting of Sope and Joe. Sope is not just a remarkably gifted actor, he also happens to be an incredibly gifted screen fighter. We had absolutely no right to give him the complex choreography that we did.

Featherstone: In terms of those action sequences, that process is something I had never ever seen or experienced or heard of before. They were planned for months, every single movement. Everything was filmed shot by shot, exactly what you see, and it was replicated on the day with the actors.
That process, in television, has never been allowed to happen before in my experience, and we’re very good in TV at saying, ‘We don’t do it like that.’ This show really opened up a different way of looking at how you can create these things. And given TV is so big now and we are competing with films, and succeeding a lot of the time, we need to be able to embrace new methods and approaches.
It’s a really groundbreaking approach in the show. It will be undersold, because you’ll watch it and not really understand quite how much extraordinarily new thinking has gone into making it.

The production was underpinned by a sense of rebelliousness and experimentation, with the creatives confident this has resulted in a series that will keep viewers engaged both with the action and the characters…

Hardy: There was a rebellious feeling that we’re three genre film directors doing a TV show with very respectable companies, but there was also a really nice sense of experimentation and freedom. It’s my first TV show and I’ve had an insanely focused, hardworking time, but everyone’s been supportive to try to achieve this level of scale. It’s also important to me that the story and emotions are there.

Ochoa: Gareth said really early on, ‘I want to make a TV show where no one in the audience feels safe at any moment in time.’ In a great way, we managed to deliver that, whether it’s a drama scene or an action sequence, because of the way it’s built.
You never know what might happen or who might die or why, how or when, or who’s going to betray whom or fall in love with someone. There’s a really good love story, by the way. If you get to the end of it all, there’s quite a romantic denouement.