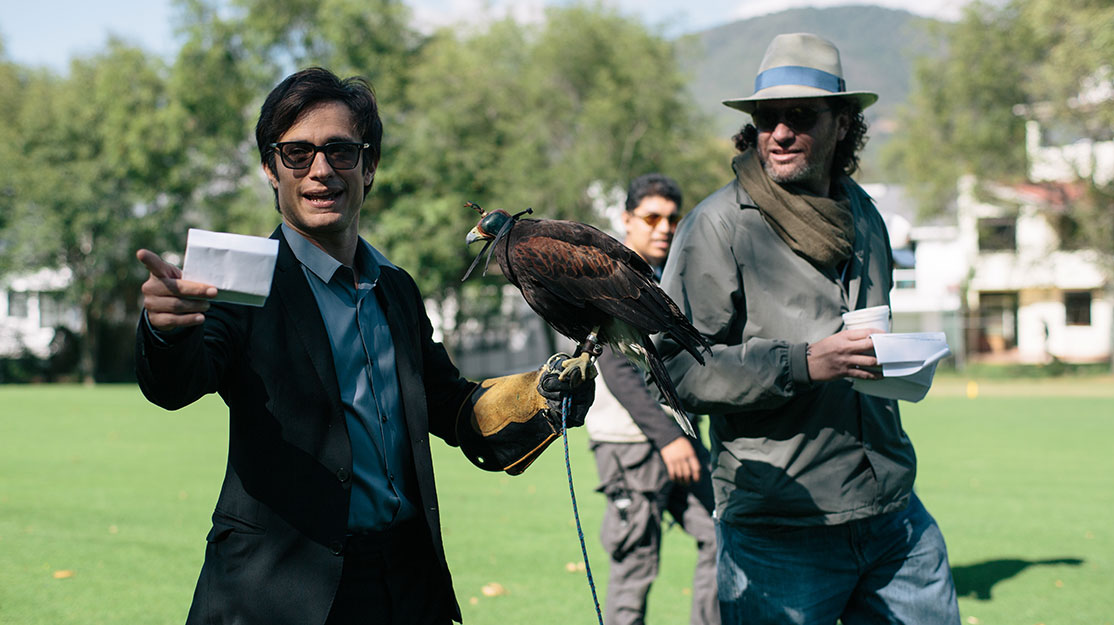 From films such as The Motorcycle Diaries and Y Tu Mamá También to Babel and a Golden Globe-winning role in Amazon series Mozart in the Jungle, Gael García Bernal stands tall as one of Mexico’s most successful and dynamic screen exports.

But his latest TV series sees him return home, where he is putting in a performance both in front of and behind the camera. Aquí en la Tierra (Here on Earth), co-created by Bernal, is an eight-part series that follows the interlinking lives of Carlos Calles, played by Alfonso Dosal, and Adán Cruz (Tenoch Huerta).

Carlos’s life is radically altered when his father, the republic’s anti-corruption prosecutor, is found dead. At the same time, Adán, the son of the head of security for Carlos’s family, is disturbed by riots in his village: rebels are protesting against the construction of a new airport endorsed by Governor Mario Rocha, Carlos’s stepfather.

“It’s all about the perils of inheritance,” Bernal explains. “What happens to people when they inherit so much? And what problems do they have from money and a social structure they didn’t ask for? Do they have to justify every day why they have so much, or do they rebel? What we do is point out this journey in Latin America.

“It’s very politicised, very energetic and multi-layered. They are issues the whole world shares with Latin America – the feeling we can be so much better but something is not quite there.”

Bernal himself has a supporting role as El Pájaro (The Bird), an influential fixer with contacts among the world’s elite politicians and financiers. But on top of that, he co-created the series with Kyzza Terrazas and Jorge Dorantes and is also among the executive producers and directors.

“This is an idea we had a long time ago but back then we couldn’t do it as a TV show,” Bernal says. “It was very difficult for this type of show to be made, because in Latin America the whole media landscape was connected by different companies that were not trying to do these types of shows. Then a few years ago, we started developing it, invited people to participate and then went around to see where we could place it. Fox were very keen and they’ve been great. They gave us the freedom to experiment. We went on a fantastic journey.”

Part of that journey has seen Bernal as the lead director, helming the first episode of the Spanish-language thriller. He has previous experience behind the camera so he was keen to extend his education, working alongside talents such as Everado Gout (Mars), who steered episodes two, three and four. Others include Alonso Ruizpalacios, Mariana Chenillo and Adrian Grunberg.

“We created the show, so directing felt like an extension of that,” Bernal says. “Directing is something I have been playing with a lot. I had a chance to do it with Mozart so I said I would do it, now that I know the amount of work it takes.” On directing the first episode, he adds: “It’s so important to set the tone. We’re making a fable, inventing something. That requires a little bit of realisation and needs some direction. We’re not trying to do a documentary, we’re not trying to show reality. We know what’s on in the news, so this is the stylised, off-beat version.

“We put together a very good group of directors. We wanted to establish a style but also we wanted to play around with the fact every director will come with a new idea. It’s very dramatic in the way it’s shot and its tempo. We wanted to experiment with that. We didn’t want to copy or emulate another project; we wanted to have that freedom that every director brings with their own point of view and to just enjoy the show. It’s not in any established genre, it’s not like an action series or a romantic comedy. It’s got many tones and you can play with that. The result is quite nice.”

For now, however, acting is still Bernal’s priority. “I love being an actor and want to be an actor as long as I don’t get pulled in too many directions,” he adds. “I want to have time to focus on life and not other lives [on screen]. I want time to be with my family.”