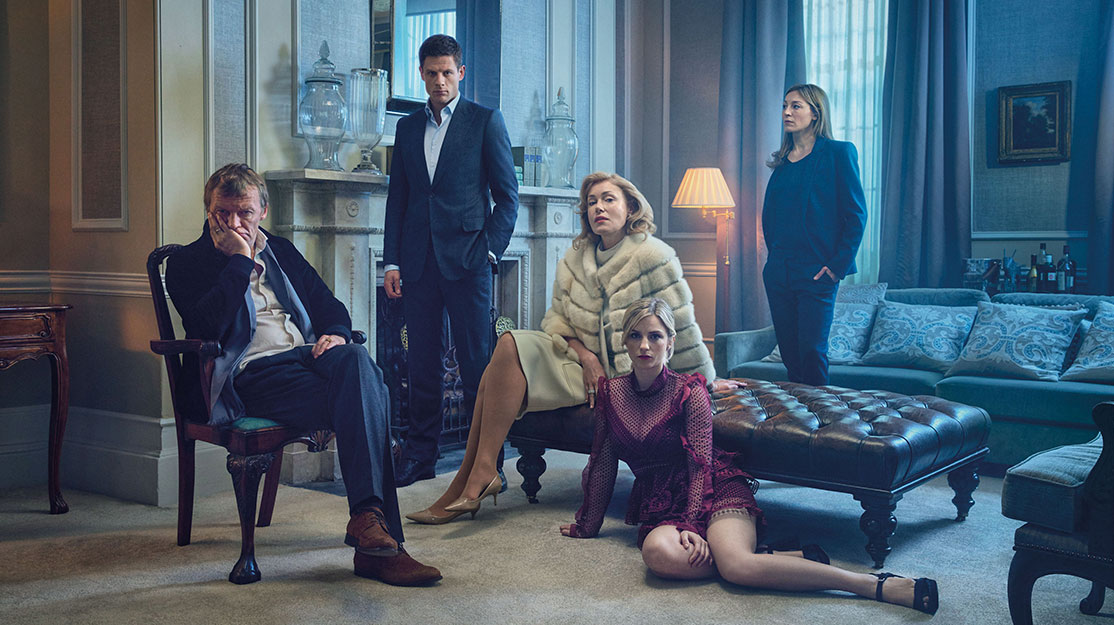 From Russia with cash

James Norton and Juliet Rylance lead the cast in McMafia, the BBC and AMC’s global crime drama about a family of Russian ex-gangsters struggling to stay respectable.

Langleybury House, a splendiferous stately home on the outskirts of London, oozes opulence. The drawing room boasts a set of matching statement chandeliers and enough oil paintings to fill several rooms at the National Gallery. There are two classical columns in the middle of the room and a gigantic marble fireplace across one wall. The room screams megabucks.

When DQ visits, however, ‘megaroubles’ might be more accurate, as the sumptuous home is doubling as one of the residences of the fictional Godman family, a clan of former Russian gangsters who have made serious money from illicit activities around the world.

When you look around their home and eye items such as the incredibly ornate drinks table – where surely they only mix White Russians – your first thought is, ‘Who says crime doesn’t pay?’

On the back of their dodgy dealings, the family have turned respectable. They have whitewashed their stained past and become a worldwide corporation, with a lucrative franchise on every continent. They are the McMafia.

The story centres on Alex Godman, played by James Norton with the same suavity he brought to the role of another powerful and charismatic Russian, Prince Andrei in War & Peace. Now an upstanding businessman, the English-raised Alex has spent his entire life attempting to extricate himself from the tentacles of his family’s mafia history. Forging a legitimate business as the head of an ethical hedge fund, he is trying to escape his background and build a law-abiding existence with his girlfriend Rebecca (American Gothic’s Juliet Rylance).

But when the Godmans’ criminal legacy comes back to haunt them, Alex swiftly becomes enmeshed in a sinister underworld and is obliged to reassess his values in order to shield those he loves from peril.

This ambitious thriller investigates how the rise of globalisation has dramatically narrowed the gap between the corporate and the criminal. When businessmen and gangsters wear the same hand-made suits and inhabit the same first-class lounges, how can you tell the difference?

Amini, who previously wrote the highly regarded screenplays for The Dying of the Light, Jude, The Wings of a Dove, Drive and Our Kind of Traitor, takes a seat in the luxurious mansion to explain what drew him to McMafia. “The book is factual and there are no storylines as such, but what was really exciting is that the world Misha’s book painted was so interesting,” he says. “It was such a potentially exciting canvas. The book gave us great characters and a great world, and it’s easy to invent scenes for that.”

The Iranian-British filmmaker continues: “I’ve always loved the gangster genre, but even shows like The Sopranos, which I loved, are all about the end of that genre and the end of the gangster. They told us about the death of that in the 1990s.

“But then I read this book, and it was all about how gangsters were being reborn globally. Suddenly the triads were dealing with the cartels who were competing with the Russian mafia. It was like Game of Thrones with mobs.”

Watkins comments: “There was a big conversation we had with AMC and the BBC first off, which is that I didn’t want to do that thing where, not naming any other productions, you cast a big-name British actor to play Alex’s Russian dad.

“It feels false straight away – I can smell it. It’s costing us quite a lot to fly all the actors in, but it’s worth it in terms of the reality it gives. When you’ve got four actors from Tel Aviv playing a scene in Hebrew, you can’t fake that.”

The director, whose other works include The Woman in Black, Eden Lake and The Take, adds that this approach has enhanced the verisimilitude of the project. “It’s fantastic, because as a director you want truth. This is not about heightened drama, it’s about truth. It’s about understated performance, and I think some of those European actors really bring that. I don’t know what’s in the water, but it’s really amazing. Less is more.”

The Russian cast members have clearly relished the experience of working on a British drama. A big star in her own country, Maria Shukshina plays Alex’s Russian mother, Oksana. “I’m very happy James is now my son,” she says, laughing. “He has a big following in Russia, a lot of fans. When I was coming over here, all the ladies were telling me to say ‘Hi’ to him and saying, ‘Give him a hug.’ So I said, ‘Of course!’”

Shukshina says she has found very little difference between the shooting techniques in the UK and in Russia. “It’s absolutely the same, apart from the lighting. It’s a lot darker on set here, there’s no light. It’s only natural light, really.

“I gave a Russian doll to the director of photography as a celebration of International Women’s Day and now he puts up a light panel when they’re doing wide shots of me – I know what I’m doing!”

Filmed in no fewer than 11 countries (including the UK, Russia, India, Israel, Turkey, Qatar and Croatia), the project is conceived on an epic scale and Watkins has evidently had to summon up great depths of energy to make it.

He spent seven weeks just filming in India, for example, and has also been leading the McMafia crew all over London. “We’ve shot in the Sky Garden at the top of the Walkie-Talkie building [the distinctive skyscraper officially named 20 Fenchurch Street] and we had a huge Russian banquet scene in the Victoria & Albert Museum. We’re trying to use London as this city where anybody can buy their way in.”

Norton, who has also starred in Happy Valley, Black Mirror, Grantchester, Lady Chatterley’s Lover and Life in Squares, pulls up a seat beside the filmmakers and chips in: “When we talk about the Mafia, it is so tied up with those portrayals that we’re so used to in The Sopranos and The Godfather. But what’s so lovely and fascinating and so relevant about this story is that it shows how the mafia is a totally new phenomenon.

“It’s now a globalised corporate entity. It straddles all these different countries and financial systems. It’s no longer just a protection racket. It’s the Panama Papers, it’s corrupt presidents and prime ministers, it’s even in the possible link between the Kremlin and the White House and how that’s facilitated. That was a real eye-opener for me, and I hope that’s what the show will reveal.”

Another intriguing aspect of McMafia is the fact that even though Alex is very much an anti-hero, viewers are – almost in spite of themselves – still drawn to the magnetic central character. Watkins describes him as “The Russian bear in the bowler hat.”

So is it a case of ‘the devil has all the best tunes?’ Norton believes it’s more nuanced than that. “It is fascinating, and it’s kind of sexy and empowering because there is this whole underworld of people who don’t abide by the rules and do what the hell they want – and it’s exciting. You get seduced by it, but you’re never quite sure how much you’re being seduced.

“Alex convinces himself that it’s about protection and survival, but there’s another side to it, and the beauty of Hossein’s writing is that he and the audience are never quite sure. Each choice Alex makes – is it to do with survival or is it a bit more to do with the fact that he just wants to go deeper and deeper and gather more control and money? So, McMafia is brilliant because it’s never about villains and heroes – it’s all about that wonderful mess in between.”

Before he is called back on set, Watkins expresses his hopes about what viewers will take away from McMafia. “You look around you and realise crime is everywhere. The point of the book and the series, really, is that it’s invisible, but that it’s all around us. We’re all, in some way, complicit. If someone buys a fake watch, say, they’re part of the problem.

“Or look at illegal labour. That affects people in ways that they don’t necessarily realise. McMafia is about the blurring of those lines between governments, corporations, intelligence, police, criminals. Particularly in a ‘post-truth’ world, people aren’t clear what those boundaries are.”

The director continues: “I think McMafia is very timely. For me, the best drama has some kind of grip on the world and touches on that. I hope that it’s not only entertaining, but also that on the way home, or in the pub, people talk about it. It’s not Chekhov, but you’re hoping it has something that has a little bit of grit.”

Amini closes by homing in on one tiny detail in McMafia that underlines the authenticity of the drama. “Misha told us about a gangster whose hobby is going to dog shows. I could never have invented that.” Did that make it into the series? “Yes, it’s in. You can’t ignore a thing like that.”