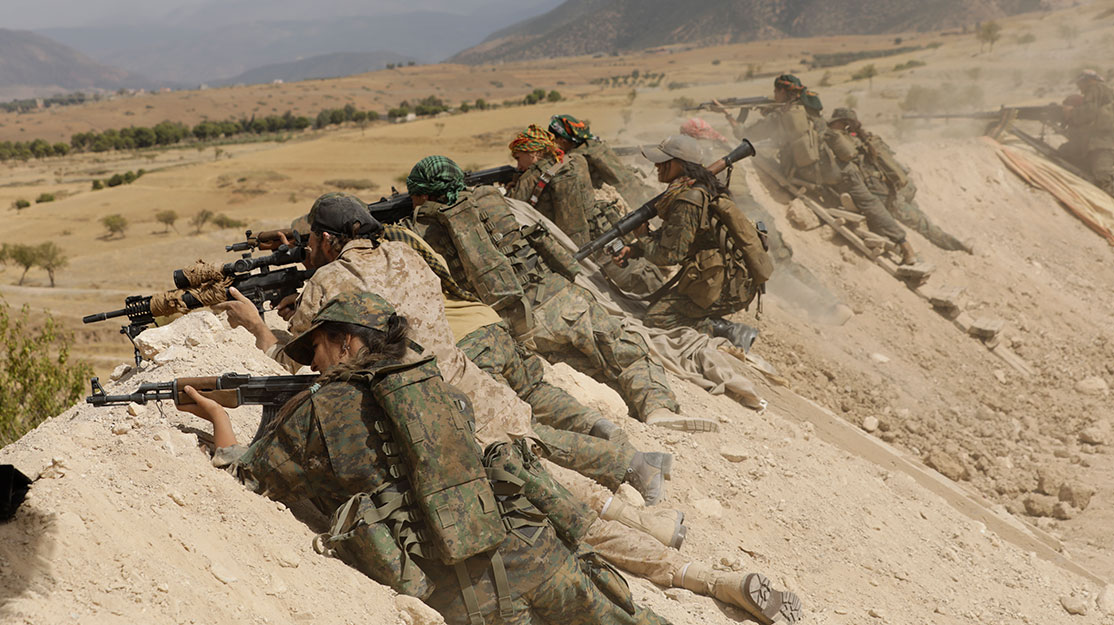 Co-creator Maria Feldman and stars Mélanie Thierry and James Purefoy speak to DQ about how No Man’s Land, an eight-part thriller set against the backdrop of the Syrian War, offers a new perspective of the conflict.

War in the Middle East and the rise of Isis has proven to be fertile ground for drama writers in recent years, with Sweden’s Kalifat (Caliphate) and the UK’s The State among those to focus in particular on the war in Syria.

Another series set in the same arena is No Man’s Land, an eight-parter that follows the conflict through the eyes of Antoine, a young Frenchman in search of his estranged, presumed-dead sister.

While unravelling the mystery, he joins forces with a unit of Kurdish female fighters and travels with them into Isis-controlled territory, bringing him into contact with anarchists, spies and innocent victims in a series that provides a fresh look at events in the country.

The inspiration for No Man’s Land came to Feldman when she was watching a news report about events in Syria, when Isis was at its peak. She saw two young female fighters making a lot of noise and wearing brightly coloured clothing – not the best camouflage for battle.

“The reporter explained the reason for this unusual scene is that Isis fighters are not afraid to die in battle, unless they’re killed by a woman,” she explains. “So hearing those sounds and seeing those headscarves, they know women are shooting at them and they totally freak out. Sometimes they just drop their weapons and run away. That’s why battalions of female fighters were playing such an important role in defeating Isis in Syria. I got really fascinated by this phenomenon – they’re very young and beautiful and they’re fighting evil.”

Feldman also became intrigued by the number of Western volunteers arriving in Syria from all over Europe and the US, not only those joining Isis but also those aiding the Kurdish side.

“I decided we needed a Western character to bring us into the region because I wanted it to be a really international show,” she continues. “So we start with Antoine, a young Frenchman from the Parisian bourgeois, whose sister died in a terrorist attack two years earlier in Cairo.

“We start with him two years later and he’s in a fertility clinic with his beautiful wife. All of a sudden, something draws his mind to the TV. There is a news report from Syria and then there’s an explosion. He sees a woman running towards the explosion to help the wounded. He can’t see her face, it’s very blurry. But he’s sure that it’s his sister. He knows it can’t be true, but he can’t take this woman out of his mind and he decides he needs to find out who this woman is, even if it’s not his sister.

“Very quickly, he finds himself in Syria in the middle of the war with the Kurdish female fighters, and through him we explore this side of the story.

“Another side of the story is about three British childhood friends who come to join Isis for various reasons. We tell this small story of friendship and betrayal, rather than the story of Isis, because one of them is going to betray the others.”

French actor Mélanie Thierry (La Douleur) plays Anna, the supposed dead sister of Antoine (Félix Moati, The French Dispatch). She’s not giving away any spoilers as to her character’s fate, however, explaining only that viewers will meet her through flashbacks and family videos.

“What we see is this young archeology student living in Paris in a warm family. Because of a terrible loss and after a betrayal, she has to quit,” Thierry says. “She doesn’t believe in her family anymore and she has to start with a blank slate and create her own family with a new identity. She’s going to be mixed up with some good and bad people; she’s an easy target, she’s vulnerable, and she’s going to make some courageous choices.”

Feldman adds: “At some point, we will also see what really happened to Anna – we have an episode that tells Anna’s story. But I can’t tell you if she’s alive or if this woman in the video is her or not.”

No Man’s Land, which had the working title Fertile Crescent, marks Thierry’s first TV role. The actor describes her experience as “very interesting, challenging and demanding,” adding: “It was a melting pot of all these cultures, all these languages and English actors, French actors and Kurdish actors. It was nice to work in Morocco for several months.

“The flashbacks give an idea of who Anna is. She’s a human-rights activist and she helps people and falls in love with a refugee in Paris, and we can feel she has to confront something very painful. It will drive her to something. What I liked was working with an Israeli director, some French and English actors and having to play in English and Kurdish sometimes.”

What is certain is Stanley works with the intelligence services and uses all his skills of manipulation to turn events in his favour, coming into contact with Antoine, Anna and the three London friends through the series.

“He has a lot of fingers in a lot of pies,” Purefoy says. “He’s really interesting and it’s a really incredible story.” Is he honourable? “That depends where you’re coming from. I played a CIA agent in an Amazon series last year and somebody said to me, ‘So you’re the good guy.’ Well, if you’re American, I’m the good guy. But often one country’s interests in other countries might not make you quite so friendly to the people of those places. But to your own country, maybe you are. It’s very complicated and ambitious and grey, and that’s always the best area to be in. They’re not what they seem.”

The actor also notes similarities in playing a spy and a psychopath, having played a killer in three seasons of Fox drama The Following. “There is something similar between them in terms of manipulation, acting and getting people to do the things you want them to do,” he explains. “It’s very much in the script – he shifts and changes. You think he’s one thing, you think he’s gay at one point. We still don’t know. Has he got a family somewhere else? Or is he just using that as a way to be very unthreatening? There are a lot of stories and he doesn’t like to reveal too much about himself.”

Feldman jokes that she thought the CIA were going to knock on her door at one point during development, with the writer’s web searches including such terms as ‘How to join Isis’ and ‘beheading.’ But as with all fact-based drama, research has been key throughout the project to ensure as much authenticity as possible.

“We all did a lot of research and we tried to be a real as we could. It was very important for us,” she says. “We had Kurdish and Syrian coaches on set to make sure people spoke and acted correctly and we had the right rituals. We even had British accent coaches, so we get the West London authenticity too.”

Purefoy says it’s important for everyone involved to feel no “bumps” in the story. “You feel these people have done their homework and what you’re watching is absolutely believable. You don’t look at it and question anything, because the only thing you want to be watching is emotion, character and story,” he says. “You don’t want to feel, ‘Oh they got that wrong,’ because that just takes you out, even if it’s just a brief moment.”

Feldman and Mansuri originally devised the Isis storyline, before the former inserted the French family dynamic. Then they brought Cohen and Leshem on board to write the scripts. “We all live in different cities and continents, so it was a bit challenging – a lot of Skype and a lot of note writing but a lot of discussions,” Feldman says.

Feldman’s Masha Productions and Mansuri and Jonathan Doweck’s Spiro Films then connected with French producer Haut et Court (Les Revenants) to produce the series, which was named best project when it was first pitched to international partners at Series Mania in 2017. Fremantle joined as distributor, with French network Arte and US streamer Hulu commissioning the series.

Filming took place in Belgium and France, while sections set in Turkey and parts of the Middle East – Syria, Egypt and Iran – were shot in Morocco.

“The shoot was very challenging; the international nature of it was challenging,” Feldman explains. “We had crew and actors from more than 15 countries because we’re trying to keep it authentic and we were shooting Belgium and France and Morocco with one director who did the whole thing.

“It’s a big thing that happened that affects the whole world, and it will keep on affecting the world for a long time. Our show takes a very different perspective, with the Kurdish female fighters, European involvement and Western intelligence involvement in the conflict. It’s very different, but the war in Syria is not a local conflict – it affects the world.”

Featuring family secrets and drama, love affairs and betrayal, No Man’s Land goes far beyond the arena that serves as the backdrop to the series, with every character being cheated or double-crossed at some point.

“It’s a show about betrayal and identity and who you really are – French, British, Israeli? I think it will appeal to a lot of people because we’re dealing with very universal themes,” Feldman says, revealing that her thoughts have already turned to a second season before season one airs later this year.

Purefoy adds: “It also dramatises things we are aware of in the news but which I have not seen in a drama. I have not seen a story about three West London lads who go out and join Isis. I’ve read about those stories, but I haven’t seen that and been able to think what that might be like for them and how they deal with that, or the character Melanie plays. There’s lots of fresh stuff in this show we haven’t seen before.”