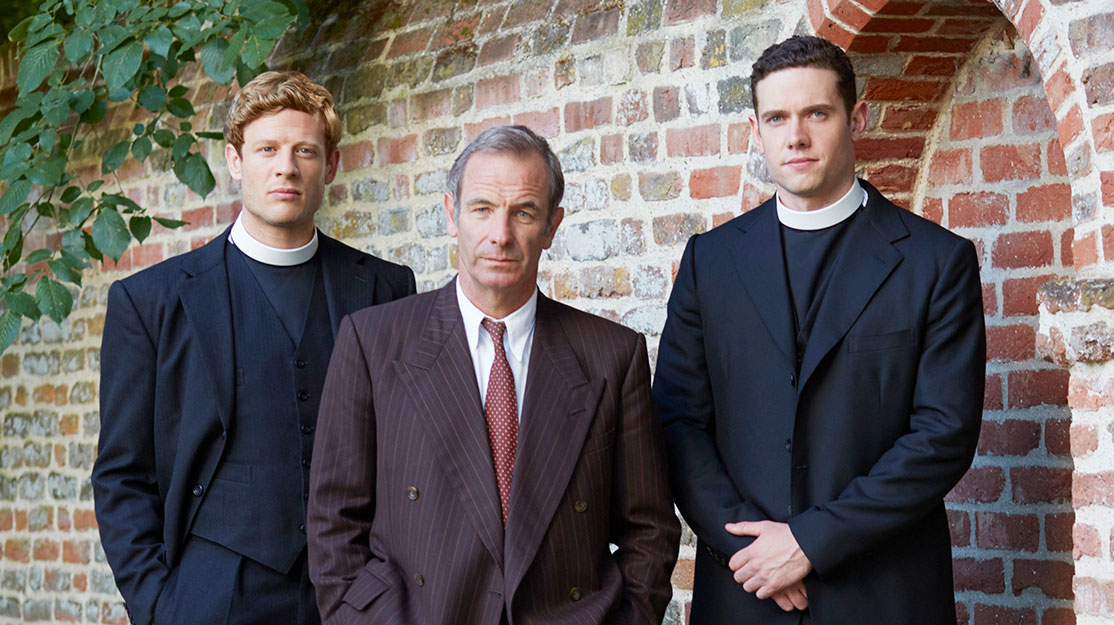 Grantchester has a new crime-fighting vicar. DQ speaks to executive producers Diederick Santer and Emma Kingsman-Lloyd about the challenge of replacing its leading character, while new star Tom Brittney discusses joining the series.

For any long-running series, its success can also become a curse. For while having a drama return year after year is clearly a sign of its popularity with audiences, those involved — particularly in front of the camera — can often be presented with new opportunities that very success has afforded them.

So it proved with Grantchester, which returned this month for a fourth season on ITV with the unenviable task of introducing a new leading actor to replace the outgoing James Norton, who has become a household name thanks in part to playing Sidney Chambers, a vicar who teams up with a police detective to solve a number of gruesome crimes around his parish.

Since season three aired in the UK on ITV in spring 2017, more than 18 months have passed on screen, during which producers Kudos and US partner Masterpiece on PBS have been tasked with finding a way to give Norton an exit from the show while replacing Sidney with a new character.

“We knew James would come back and do some more but we knew fairly quickly he probably wouldn’t do a whole season,” recalls executive producer Emma Kingsman-Lloyd.

Fellow EP and Kudos CEO Diederick Santer continues: “James loves the show. He’s just got opportunities. He wanted to do right by the show and didn’t want to say, ‘I’m gone, I’m never going to do it again.’ But he was interested in doing an exit and the idea developed from there. I think it was important to both broadcasters for continuity that there would be a passing of the baton — if there was to be a fourth season, that it wouldn’t come back cold with a new vicar and no James Norton.”

The task ahead was for series creator Daisy Coulam and her writing team to find a story, now set in 1956, that brought Norton’s charismatic, jazz-loving clergyman back to the screen, leading to a final farewell, while passing the baton to a new leading character.

“What’s really nice is in storytelling on TV, departures are opportunities,” Santer says. “It’s a great shame James is leaving the show but it provides opportunities for a great story to tell — what is it that finally moves Sidney Chambers on and who’s going to be the new vicar? Knowing that’s how the season would be enables you to tell different stories.”

As it transpired, it was also an opportunity for curate Leonard Finch, played by Al Weaver, to get the chance to lead the church and even audition for the role of Detective Inspector Geordie Keating’s new partner — though he subsequently proves he’s not ready for either role.

But as Sidney prepares for his exit and Leonard takes centre stage, for a while at least, new arrival Will Davenport is eased into the series before his eventual appointment as Sidney’s replacement.

“All those concerns that viewers would have are things we explore through the episodes because we never wanted to just push Will straight into it and say, ‘This is the new character,’” Kingsman-Lloyd says. “Audiences have to come to love him in the way they did with Sidney in season one. With Len having the crux of the story in episode three gives us the chance to play with that.”

Will is initially introduced as the chaplin of Cambridge University’s Corpus Christi College, where he becomes involved in a crime and first encounters Geordie, played by Robson Green. It’s not then until Sidney leaves and there’s a vacancy at the vicarage that viewers see something of the appointment process that leads him to take Sidney’s place on a permanent basis.

This won’t be a case of substituting one character for another, however, as Sidney and Will are profoundly different, meaning the new arrival will forge very different relationships with the supporting characters to those they enjoyed with his predecessor.

“It’s really interesting because the main difference with him is age,” Kingsman-Lloyd says. “He’s a few years younger than Sidney, which in the normal way of thinking wouldn’t mean anything, but in that era, it means he didn’t fight. He missed the war. Will’s attitude is very different to Geordie, who is conflicted with this younger man he doesn’t know. Very quickly he’s some use to him in his work and wants to ask him to help him out in the way Sidney did. But it’s not straightforward and Will’s not jumping straight in. As far as he’s concerned, he’s a vicar, not a policeman. We have fun with that and see their journey. We didn’t just want to parachute him in. It’s important we give time to get to know each other.”

Santer says recasting the lead role of Grantchester was not necessarily an opportunity anyone wanted — “I’d have been happy to do seven seasons with James” — but once it presented itself, it’s one they have run with. “If we didn’t have that, maybe we’d be doing an absurd story or the church would have blown up,” he jokes. “It saved us from doing something implausible to refresh the show. You never want a show like this to settle or always be the same, always repetitive, always the same tone, always the same ideas. It brings a different energy to the show.”

The hardest part of making the show, Santer adds, is getting the tone right, with the show described as a cosy, story-of-the-week crime drama, yet one containing some dark plot points and characterisation. “James Norton’s character is essentially consumed by self-hatred. He drinks and does a lot of bad things to take the pain away. It’s about post-war depression on some level and about a country at war with itself. So finding the balance between the warm, nostalgic elements and the murder, bleakness and self-hatred and we walk a line between that,” he says. “Editorially, it’s not always the easiest show to balance or get right, but in execution it tends to work well. We get great directors, great guest cast and it’s a nice place to be.”

Tom Brittney, who plays new vicar Will, didn’t watch Grantchester and made the decision not to before his audition to ensure he didn’t end up mimicking Norton’s performance or struggling under the weight of following him. That meant the actor, whose credits include Outlander and UnReal, was able to take the character as Coulam had written him and bring him to life.

A rock ’n’ roll loving, motorcycle riding vicar, Will represents a new era in Grantchester, one removed from the effects of the Second World War and increasingly influenced by 1950s pop culture arriving from the US. His personality also informs his new relationship with Geordie.

“I was obviously terrified,” Brittney says of joining Grantchester, which is based on James Runcie’s The Grantchester Mysteries novels. “Before the show came out, this person asked, ‘Are you playing Sidney? Are you doing the same part?’ It’s like, ‘No it’s another, completely different crime-fighting vicar!’”

Coulam, who is also an executive producer, wrote a three-page backstory for Will ahead of Brittney’s final audition, which he says provided an astonishing level of character detail he’d never had before. But there was still room to inject some of his own personality. “You’ll always try and bring yourself to certain parts but this was one where his fire and his passion and his opinions were things I could relate to,” he says. “It was just written for me. I was connecting to it in a way I hadn’t done before with a character and just going with it. I’d never wanted to play a character as much as this.

Ahead of filming, Brittney had to learn how to ride a motorbike, which he says was “tough” as he had never wanted to ride one before. “I do love riding them now. I didn’t think I would and it took me a while to get over the fear of coming off at 70mph down the motorway,” he admits. “So that was one thing I learned. Will gets stuck in a little bit. He loves to box. There’s some stunts in this, which was my first time of really doing some. The first time, I was like, ‘I want to do a Bourne movie now!’ You do a fight scene and you immediately want to do an action movie.”

On air in more than 130 countries thanks to distributor Endemol Shine International, Grantchester isn’t just a hit in the UK and US but has become an audience favourite around the world, with season four airing in the US later this year. Brittney says its popularity comes down to the fact that while the show is a murder mystery at its core, that element is often overshadowed by the lives of the vibrant cast of characters on screen.

“There aren’t many shows that give their characters that much to work with,” he adds. “There’s so much going on in this lovely little village that it’s not always about the murders but the lives of these people and you feel so invested in them and the relationship between Sidney and Geordie, and now Will and Geordie. They’ve written it so wonderfully, it’s more than just a murder mystery.”