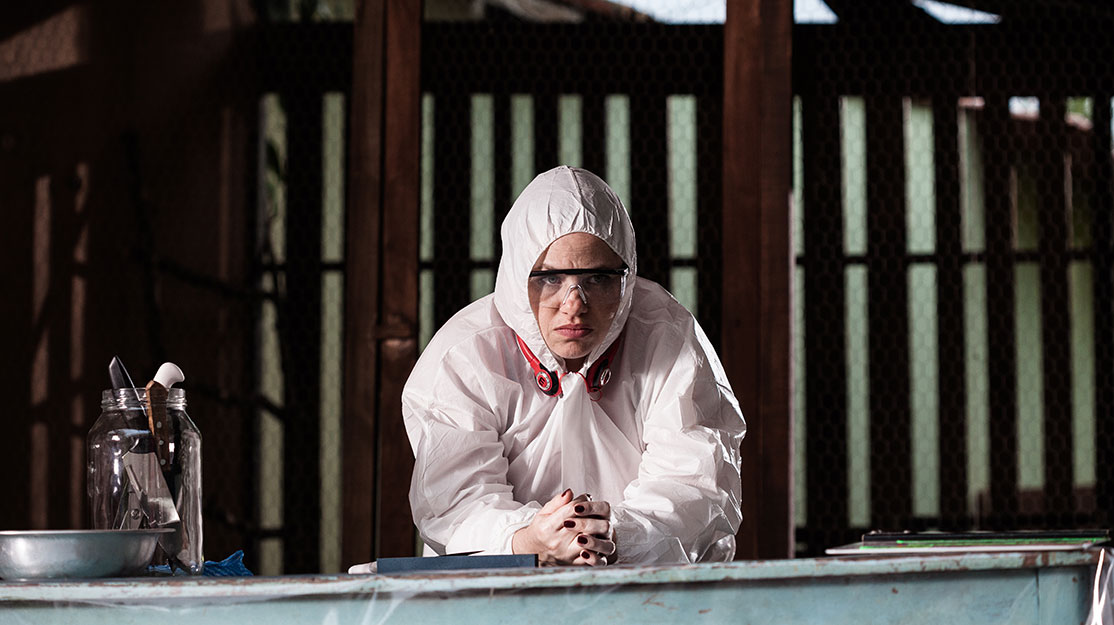 In just four 30-minute episodes, Brazilian series  Os últimos dias de Gilda (The Last Days of Gilda) charts one free-spirited woman’s battle against her narrow-minded, religious neighbours. As the title suggests, the conflict reaches a climax, but only viewers who watch all the way to the end find out what lies ahead for the title character.

Played by Karine Teles, Gilda loves cooking, men and life. She breeds pigs and chickens in her back yard, butchering the animals herself and selling the produce. She also loves to show off her culinary skills, much to the delight of her friends and numerous lovers.

But her unashamed behaviour and sexual confidence leads to rising tensions among her neighbours, not least Cacilda (Julia Stockler), the wife of Ismael (Igor Campagnaro), who is running for office by representing a party linked to a religious group. Gilda must also deal with an increase in urban violence as police and militia come into conflict with drug dealers in a fight to control her community.

“Gilda is a completely free woman. She’s used to living her life in the way she really believes,” series creator, director and co-writer Gustavo Pizzi tells DQ. “She’s used to having a lot of boyfriends. She raises pigs in her back yard. She’s not doing anything wrong and she’s not doing anything bad to anyone around her. But the neighbourhood starts to persecute her because of her habits and the way she likes to live her life.”

That persecution begins with small moments of confrontation with Cacilda, who mistakenly believes Ismael and Gilda are having an affair. In reality, he is simply trying to win her support at the ballot box.

“That’s the first moment when we start to see this polarisation, and we can see this increasing because we also have the political environment around them,” Pizzi continues. “There’s a paramilitary group trying to control the neighbourhood. They are linked to the political group that Cacilda’s husband is trying to be elected with, and slowly we start to understand and see how Gilda becomes more involved with that conflict.”

Pizzi suggests that, had Gilda lived in the Middle Ages, she might have been burned at the stake for the way her lifestyle flies in the face of the beliefs of those around her. “Even here in Brazil in the 1970s, under the dictatorial military government that we had here, she probably would have been arrested and killed,” he adds. “We are facing really strange and difficult times around the world. With the polarisation we are facing everywhere, it’s really important to understand it’s not good for anybody, except a small economic group whose interests are being served. Gilda understands this kind of thing through the narrative. Who are the real enemies she must fight against?”

The project has its roots in Rodrigo de Roure’s stage monologue of the same name, which debuted in 2004 with Teles in the lead role. Returning to the character for the series, Teles also co-wrote the scripts with Pizzi. The show was filmed in 2018 and launched on Canal Brasil in November last year, having been produced by Baleia Films and Nostro.

“The first time I saw the play was really beautiful because I really like the way Rodrigo builds the sentences [of the monologue],” says Pizzi, who uses lines from the play as interstitial cards throughout the series. “I was fascinated by the idea of that independent woman. She’s a mother and she also has a lot of lovers. She’s not trying to do anything against anybody, she’s just trying to live her life the way she wants.”

The screen adaptation of The Last Days of Gilda was initially conceived as a film, but Pizzi struggled to build the budget needed to produce a feature and, in time, turned to other projects. Then, in 2014, he began thinking about the episodic potential of the piece, noting that the series isn’t just a long film but four individual chapters that he says wouldn’t make sense if you strung them together.

The series still carries the spirit of its origins, however, thanks not just to Teles’ own links to the character and the use of lines from the monologue but also to numerous breaks in the story where Gilda is shown on screen alone against a black backdrop, appearing as if she is on stage.

“We try to bring that whole atmosphere [of the theatre] to the series, but sometimes just a phrase or a sentence [from the monologue] becomes a big character or the structure of one episode,” Pizzi says.

As star and co-writer, Teles was a vital partner on the project. “I would write something and then send it to her, then she would write something and send it to me,” the filmmaker says of their writing partnership. “When we had the final script, I started my work as a director and I kept working on the script and bringing new ideas. Then when we were about to shoot, Karine came back with all the actors and we did a lot more work. Karine’s a great actor and she had a lot of interaction with the other cast members. We are able to work in different ways as a director and an actor.”

With de Roure backing him to put his own spin on the story, Pizzi brought a non-linear structure to the source material while keeping true to the original idea, which was first written by de Roure with his mother in mind.

“This is a TV series, but I don’t like to use the ‘TV’ description,” Pizzi says. “I was not there shooting it as a TV thing, I was shooting it the way I know. I was seeking what was best for the narrative and the characters.

“Nowadays, [there are many different ways to tell stories on TV]. You have the series with several seasons and lot of episodes, but also series like We Are Who We Are, which I couldn’t see as a film or as a show with a second or third season. We have space to grow [when we don’t have such a clear distinction] between cinema and TV. We are artists.”

Filming all four episodes of The Last Days of Gilda took place over just 12 days in 2018. But despite the extremely tight schedule, Pizzi continued to shuffle his scripts during filming, most notably changing the ending. The limited production time also required some creative decision-making, with line producer Carlos Valinoti identifying an artists’ commune on the outskirts of Rio de Janeiro as a place where Pizzi could find all the locations he needed for the series in one place.

“It was perfect,” Pizzi says. “But, of course, we had to plan a lot to make it possible. As a director, I had to be really fast. It was really hard.”

The production was also influenced by the political situation in Brazil at the time, the series being filmed in between rounds of the country’s presidential election, which led to a run-off between far-right politician Jair Bolsonaro and Workers Party candidate Fernando Haddad. Pizzi says the issues facing the country were reflected in the show’s story, giving the cast and crew a sense of realism during the shoot.

“Everybody was afraid of what was going to happen with the country, with our jobs, with our industry, because Bolsonaro was elected at that time,” the director says. “We were already facing some difficulties around the country and especially for culture, especially for cinema. We were already under attack, so we didn’t know what would happen. Everybody started to be afraid, and that’s what happens in our story. So the whole crew and cast were really engaged in making the story strong, because people understood it would be important at that moment.”

The Last Days of Gilda will now have its international premiere this Thursday after it was selected for the Berlinale Series programme during the Berlin International Film Festival. Pizzi says the series can speak to a global audience, through not just its themes of freedom but also its focus on polarisation.

“All over the world, we are looking for dialogue,” he says. “We have to keep the idea of the argument alive, because when we polarise, when we are we are enemies, we are not talking with each other anymore. Who wins with that? If we think about that and what we are facing with the rise of fascism around the world, that’s something we really need to pay attention to.”

As for the show’s title, it throws Gilda’s fate into doubt by inferring a range of possibilities, from death to the suppression of her spirit. It takes its cue from the name of the original stage play, though Pizzi admits that for a long time the series was just known as Gilda.

“We were about to release in Brazil last year before the pandemic and I said, ‘No, it’s not only Gilda. We need ‘The Last Days of Gilda’ because we have this sensation that something is going to happen,” he says. “But it’s not just about a woman who’s amazing, but the whole context around her. It’s about how we are all living nowadays.”