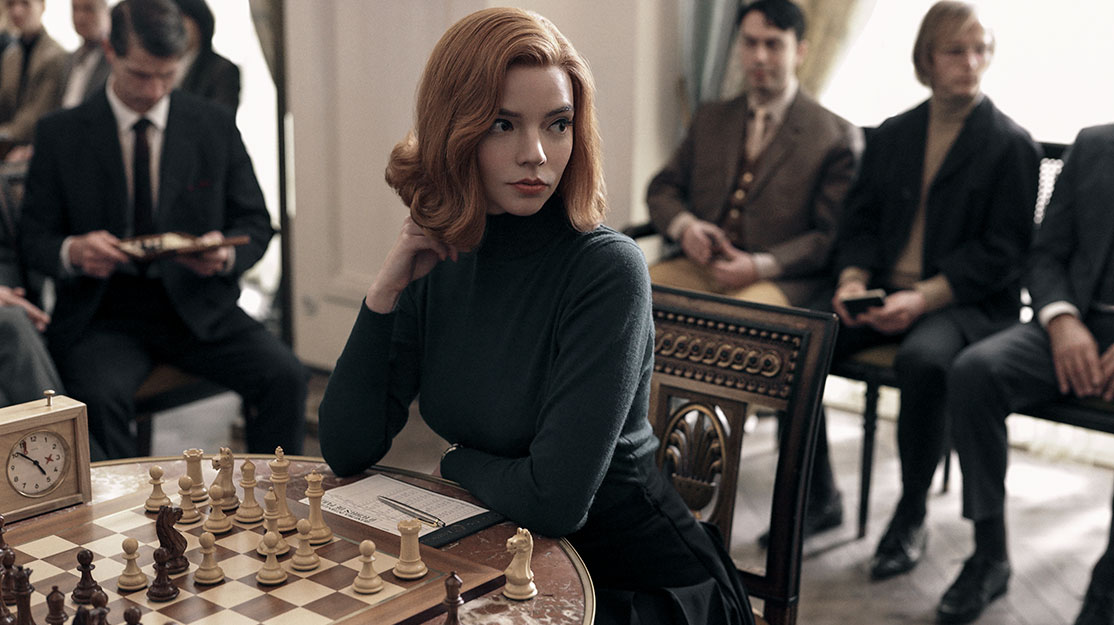 The Queen’s Gambit writer, director and executive producer Scott Frank remarks on how the story of a young female chess prodigy in 1950s America became one of Netflix’s biggest series of 2020.

When The Queen’s Gambit won the Best Miniseries or Television Film category at this year’s Golden Globes, it capped a phenomenal few months for the Netflix series, which became one of the streamer’s most talked about shows in 2020 following its release last October.

Anya Taylor-Joy (The Miniaturist), who also picked up the prize for Best Actress in a Miniseries or Motion Picture for TV, led the series as Beth Harmon, a young girl entrusted to a Kentucky orphanage in the 1950s who discovers an astonishing talent for chess while also developing an addiction to tranquillisers provided by the state as a sedative for children. In a coming-of-age story that explores the true cost of genius, Beth is beset personal demons and fuelled by narcotics and obsession as she becomes determined to conquer the male-dominated world of competitive chess.

Based on the novel of the same name by Walter Tevis, the series was co-created, directed and written by Scott Frank (Godless), who exec produced alongside fellow co-creator Allan Scott and William (Bill) Horberg.

During a keynote session at Berlinale Series earlier this month, Frank spoke about the long journey to adapt Tevis’s 1983 novel for the screen, the challenges involved in filming a series about chess and why he doesn’t want to make a second season.

Frank had been involved in previous attempts to turn The Queen’s Gambit into a film but his work making Godless for Netflix led him to pitch it as a series to the streamer.
After I did Godless, I realised it might work better as a limited series and make more sense. I gave them the book to read, Cindy Holland [Netflix’s former VP of content] loved it and that was that, we were off to the races. But while they loved the material, they never expected it to be a huge hit, so I had probably half the money I had for Godless to make it. I was grateful for even that – I was just so happy that somebody was finally going to let us tell the story. They really believed in it and they didn’t want me to turn it into something else. They wanted me to realise the story as it was, which was wonderful to hear.

One of the first things he did when writing the scripts was try to work out how to frame Beth’s chess matches within the wider context of the story.
I told myself, ‘OK, every time there’s a chess tournament or a chess game, you have to figure out the least amount of chess you can get away with. What is the least amount of chess you can have and have it still feel like it’s a real chess game or a real chess tournament?’ That was my first rule. Then when we began to plan the shoot, we were very meticulous about each chess tournament, from the look of the chess boards and the chess pieces to what we were going to focus on.
The other thing I did in the script is I tried to contextualise each chess game in the story so that it wasn’t just does she win or lose. It has to do with her as a character. It’s almost like what you would do with a musical number in a musical, so each game had its own personality or its own reason for being, which translated into its own personality. Then we would plan the shooting accordingly.
We didn’t want it to feel random, but we wanted there to be a feeling for each game. Sometimes we were on the chess board a lot, but then there are several matches where we’re just on her face and you hardly see the board at all, or on the players’ faces. Sound was a huge thing too, but what you really are focused on is the actors. We spent 12 weeks in prep before shooting and, from day one, we were planning the chess games because that was what I was most worried about.

The majority of filming took place in Berlin, which was transformed into locations such as Las Vegas, Mexico City, Moscow, Paris and Kentucky.
We originally thought we would shoot from a hub and then travel to various places, but instead we shot 80 days in Berlin and about five days in Toronto, just to get things that we absolutely couldn’t find in Berlin such as the street Beth lives on as a child, her high-school exterior and the exterior of the department store where she goes shopping with her mother. But for the most part, the trailer home, the Mexico City hotel, the zoo, the Las Vegas hotel, everything was in Berlin. Almost all of our interiors were in Berlin on stages or in actual locations. That was because we had to do it that way.

Filming was completed in December 2019 ahead of the Covid-19 pandemic, with post-production already underway before Frank and his team were forced to complete their work remotely.
We were a good couple of months into editing [when the pandemic hit] so when we moved to remote editing, it was very easy because we had a rhythm going. While I was shooting in Berlin, I had been working with Michelle Tesoro, the editor, very closely remotely so I was very used to that. She was in New York City and I was in Berlin and we were able to do it. By the time we decided to move the entire cutting room, everybody went home essentially but it was a really easy transition and luckily we were ready for it.

The seven-episode period drama was always intended to be a limited series and Frank has not had any discussions about continuing Beth’s story.
I feel like it ended where it was supposed to end. I worry that if we try it again, it will just ruin the memory of the first season. I think it worked really well. It was certainly the story I wanted to tell. I don’t have any more that I want to say about Beth or that thematic idea of genius. I feel like I’ve kind of done it and would like to move on to other things.

But after making The Queen’s Gambit and Godless before that, he says he loves the limited series format and believes it is the perfect way to tell stories that are too big for a feature film.
I would like to keep doing it – not exclusively, but there are certain projects that really lend themselves and are better suited to be told in a slightly longer format than a film. Some books couldn’t be adapted into films successfully because the adaptation is too reductive, but they work really great as a limited series. Even Godless, which was an original script, I’m so glad everybody said no to me in terms of making it as a feature, because it would have been nothing like what we did in the limited series format.

Covid-19 isn’t changing the stories people want to tell but how they tell them.
I’m just thinking the way I’ve always thought. I’m just trying to tell the stories I’ve always wanted to tell – and I suspect most people are. Right now, it’s more about the nuts and bolts of production. How do we deal with that? What are the financials associated with the pandemic and testing and keeping the sets safe and so on? All of that is factored in and there’s a premium [on budgets] now because of that.

Frank is now working on an adaptation of Taylor Adams’ novel No Exit as part of his ambition to work with new writers and filmmakers.
It’s a thriller like [1948 film] Key Largo, where a group of people are stuck in a mountain visitors centre. There are five people, with a blizzard going on outside. It’s really fun. Damien Power is directing – he directed a great Australian thriller called Killing Ground. He’s a really interesting young filmmaker. I’m very excited, but it’s simple, contained. This project’s been going on for a few years. We’ve been working on it even pre-pandemic, but it just works perfectly for what it is right now.

He’s also working with Chernobyl director Johan Renck on an adaptation of Mary Doria Russell’s novel The Sparrow for US cable network FX.
It’s one of those novels I chased a long time ago and it seems to have come back in my life. It’s a science-fiction piece about Jesuits who go off into space and make first contact in order to prove the existence of God. It’s a terrific story, and everything goes wrong, of course.
Then I’m hoping to do a project with Clive Owen called Monsieur Spade, which is a French-language series that will be based in France, shot in France, that Tom Fontana [City on a Hill] and I co-wrote about [Dashiell Hammett’s iconic literary detective] Sam Spade’s Golden Years in the early 60s in the south of France, right as the Algerian war is ending in 1963. He’s been living a very quiet life there and it’s about to become very not quiet.
I’m also adapting Laughter in the Dark, the Vladimir Nabokov novel that I’m going to do with Anya and Bill Horberg and hopefully my whole team from The Queen’s Gambit.