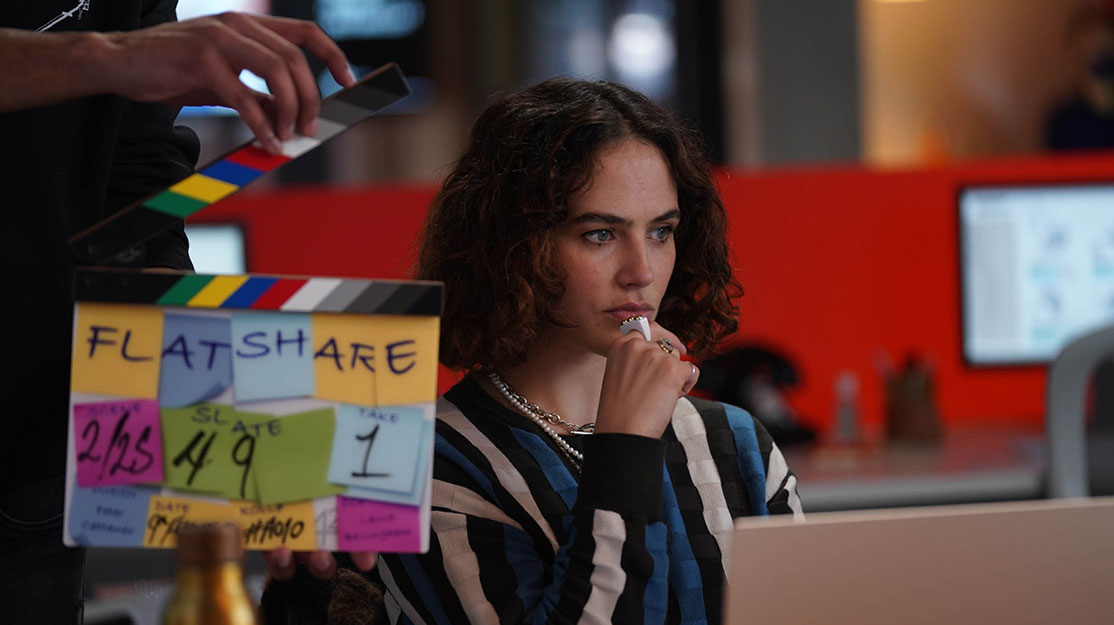 Beth O’Leary’s novel The Flatshare has been given a TV makeover for Paramount+. Executive producer Miriam Brent and director Peter Cattaneo reveal how the series aims to subvert the romcom genre in a story about two people who share a bed but are not supposed to meet.

When Beth O’Leary’s debut novel The Flatshare was picked up in a six-figure publishing deal in 2017, it wasn’t just the literary world that took notice. Miriam Brent, head of development at production and management company 42, also heard the news and was immediately grabbed by the novel’s cinematic premise.

The story centres on Tiffany and Leon, two cash-strapped 20-somethings who share a bed in a London flat – but they have never met and, if their plan works, they never will. Recovering from a controlling relationship, Tiffany spends her days working for a viral news website, while Leon works night shifts in a hospice while also fighting to have his brother released from prison.

With a strict schedule in place detailing when Tiffany and Leon can each use their shared flat, Post-it notes soon start to fly as they get drawn into each other’s messy lives, causing an unconventional attraction to build between them.

Reading the book, which was published in 2019, Brent was drawn to this “delightfully fun romcom” that also examines very contemporary underlying themes such as gaslighting, racial profiling and the cost of living. After meeting O’Leary, 42 quickly secured TV rights to the novel against a host of competition before Rose Lewenstein (On the Edge) was brought on board as lead writer.

“It just felt like this brilliant opportunity to subvert everything we’d seen before [in the genre],” Brent tells DQ. “The choice of writer was crucial and Rose was someone whose playwriting I’d been very aware of. I knew she’d nail the tone brilliantly.

“We were very aligned with Beth and what we wanted to do on the adaptation, so we secured the rights, brought Rose on right away and then started work.”

When he joined the project, Cattaneo also picked up O’Leary’s novel, but he admits he quickly put it down again. “I just thought I had the spirit of it from the beginning, and I thought I would let Rose glean everything she wanted to from the book and just trust her to bring me what was needed. Then I was freer to just look at it as a drama.”

The director was similarly drawn to its contemporary themes, and says the show has grown become even more topical in the six months since production wrapped as the UK continues to be gripped by a cost-of-living crisis.

Working with Lewenstein during the writing process, Brent says the key to the adaptation was staying true to the essence of O’Leary’s story, while finding those places the story needed to better fit the structure of television storytelling.

“Rose was really good at making sure we stuck to the characters without losing anything from the book, but also building it out for that broader TV canvas,” she says.

Cattaneo continues: “There are narrative conventions of the romcom – the meet-cute, a conflict and a betrayal and then resolution. I was keen to make sure we had that, but I was also really focused on the characterisation and the minor characters, making sure they all had a dynamic role in the overall story.

“Tiffany is a great character – she’s a bit of a car crash sometimes and the empathy we feel with her is part of the joy of watching it. Casting is a massive part of that and when we met Jessica, it was just so obvious she had it absolutely nailed. She had that slightly unpredictable thing that Tiffany has, but an absolute lovability. She is just a great actress playing a great character who was really good to root for.”

In contrast, the director says there’s an “inner dignity” to Leon, a man slightly out of his time as he receives life advice at work from a terminally ill teen while fighting his brother’s legal case against the odds.

“There’s this kind of nobility to him almost, and it was about finding someone [to play him] who had that inner charisma, who could do quite minimal scenes but have an inner light to him. Anthony really has that leading man dignity pouring out of him.”

But at every point during the show’s development, the creative team would look to subvert the traditional romcom format by asking themselves what the expected version of a certain scene might be and then how might they do it differently.

Brent recalls: “Rose was always like, ‘OK, if you’re going to have the romantic dash across town, he’s got to be on a bus’ and all the things you associate with London, all of the things that are difficult about navigating life in London, needed to come into it so it’s not this picturesque life that doesn’t really exist, and so everybody who watches it can recognise bits that are true to their own lives. We just kept reminding ourselves of that and kept looking at the possibilities in each scene to do that.”

The Covid-19 pandemic meant there were no opportunities to put Findlay and Welsh together before rehearsals began, but after reading the scripts, Cattaneo realised his two leads hardly shared the screen at all. A week of rehearsals was then reduced to one day, where the pair went through the few scenes they do share.

“It’s good to have that chemistry when you’re not shooting it in story order,” he says. “We had to do scenes where they’ve already met and bonded quite early so they did need to meet, and we just did key scenes and got them to write out thousands of Post-it notes. Sometimes rehearsal is just about doing little exercises like that, not literally nailing every scene.”

Cattaneo clearly enjoyed playing with the show’s visual style, which features a bold colour palette, split screens and match cuts that might show Tiffany leaving the flat before Leon immediately enters, for example.

“It’s just fun and witty visually, which also adds to the general poppy, young feel to the show,” he says. “Using split screen leapt out [to us], I didn’t want to over-egg it but it felt like if one’s coming home, and one was going out, it would be a great split-screen sequence. It just gave me time to have a bit of fun and keep it really entertaining and dynamic in a visual way.”

“We always knew immediately that the visual execution was going to be so important in the storytelling because of the nature of the split timelines,” Brent observes. “That’s why Pete was very involved in the script process as well. If you can infuse that within the scripts, then it’s going to make it a lot easier.”

A particularly effective device through the show are the montages used to show how Tiffany and Leon talk to each other by leaving dozens of brightly coloured Post-it notes – handwritten by the actors themselves – around the flat. But while these sequences help to speed up time in the world of the characters, they proved to be a technically difficult and time-consuming task for Cattaneo and his team.

“You can set everything up for a close-up of a Post-it note being slapped down, but it still needs to be finessed. It needs to look great, and then you spend an hour getting a second of screentime,” he says. “Two people sitting on a sofa takes the same amount of time [to prepare] and you get five minutes, so that was challenging. It was just time-consuming. But we just got quite systematic about how to do it and came up with some clever ways to stack things up and do them in an efficient way.

“The actors were incredibly patient; they did all their hand acting and, quite rightly, the way they slap it down is part of the drama. That took longer than we all thought, those montages, but apart from that it was a pretty straightforward shoot.”

Filming on the series took place across London, from the exterior of Tiffany and Leon’s shared flat south of the river Thames, between Vauxhall and Kennington, to the streets around Shoreditch in East London where Tiffany’s office is.

When it came to shooting the interior of the flat, those scenes were recorded at Bristol’s The Bottle Yard Studios, where the production team were able to create a space that was big enough to justify both Tiffany and Leon wanting to live there – and allow a camera team to move around without obstruction.

“We realised that so much of it takes place in that flat, it’s kind of a character within the show, so we needed the flexibility to do it in the studio,” the director says. “The bed is also a key character and battleground within the story, and there’s an iconic shot of the top of the bed and [the set] enabled us to pop the ceiling off and get the camera up there.”

But as the two protagonists become increasingly entangled in each other’s lives, like any good romcom the only question is will they or won’t they get together.

“You always look for ways to push them into comic and romantic tension, and the dramatic tension of keeping them apart just gives the drama an energy,” Cattaneo says. “It’s either that or you handcuff them together. The rulebook of the flat is they can’t meet so that’s a good hook and then it’s human nature that if you’re sharing a space with somebody, you’re going to start opening a drawer thinking, ‘Who is this person?’ The Post-its then become a confessional, they spill the beans a bit and then they can’t help but connect.”

To Brent, The Flatshare was always a love story in reverse, navigating tedious discussions like who should put the bins out before the honeymoon period even starts.

“Then, eventually, they reach a more intimate point by being able to confide in each other over these Post-it notes,” she says. “It’s very much in reverse, and that is something we wanted to run across the series.”