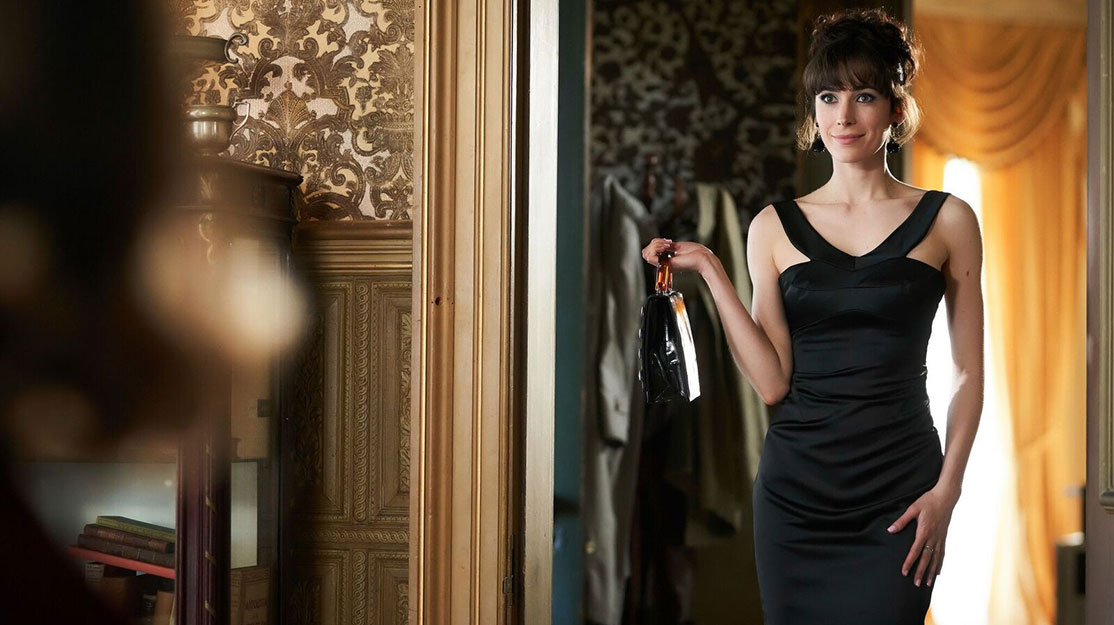 It’s been four years since the third and final season of Australian period crime drama Miss Fisher’s Murder Mysteries. The series, based on the books by Kerry Greenwood, followed the personal and professional life of the Phryne Fisher, a glamorous private detective solving cases in 1920s Melbourne.

Since then, a standalone movie that picks up at the end of season three, Miss Fisher & the Crypt of Tears, has been filmed, with Essie Davis (The Babadook) reprising her role as the lead character.

But the end of the main series has also led to a fresh spin-off, Miss Fisher’s Modern Murder Mysteries, set in the 1960s. It introduces Phryne’s niece, the “glamorously reckless” Peregrine Fisher, who inherits a fortune when the famous aunt she never knew goes missing over the highlands of New Guinea.

That leads Peregrine, played by Geraldine Hakewill, to become a private detective in her own right, supported by the guidance of a group of exceptional women that make up The Adventuresses’ Club, of which Phryne was also a member.

The series has been created by Every Cloud Productions’ Fiona Eagger and Deb Cox, who were behind the ABC original. This time, however, four telemovies have been commissioned by Australia’s Seven Network. The films – written by Cox, Samantha Winston, Chelsea Cassio and Jo Martino – first aired down under in February and, like their predecessor, have gone on to find international audiences, with buyers including UKTV’s Alibi and US streamer Acorn TV picking up the spin-off from distributor All3Media International.

Speaking to DQ from the Moroccan set of Miss Fisher & the Crypt of Tears, Eagger says the production team had considered making a prequel to the original series, featuring a younger Phryne and learning how she fled her British boarding school to come to Australia.

“What we realised is our audience doesn’t necessarily want a younger woman,” she explains. “They’re happy to have a woman who’s a bit older – Geraldine is in her 30s – and then the Adventuresses’ Club. That’s what they don’t get enough of on screen. We’re happy to do that.

“Deb and I are interested in stories that relate probably more to where we are in our own lives. [ABC legal drama] Newton’s Law was a story about a female protagonist balancing work and family. It’s just what we do, but we like to have a bit of fun and we like the murder-mystery genre. There’s a murder at the beginning and it’s going to be solved by the end, so that really helps your story structure. You can also dress up issues in a genre. If you look at Miss Fisher, there’s illegal abortion, there’s the slave trade, there are a lot of social justice issues to do with women that underpin the stories. We just dress them up.

“So with this one, again we take on a world that suits the time, so there’s a fashion parade. We’re doing one about UFOs and space, the Russia-US factor, one set in a cooking school and one in a TV studio. But, of course, somebody’s murdered in every opening act. It’s a murder-of-the-week series and we hope we’re setting up a new franchise to go for many seasons.”

While the original series was based, at least initially, on Greenwood’s Phryne Fisher Mystery books, there is no literary basis for Modern Murder Mysteries. The first series went away from the books in the second season anyway, Eagger points out, noting that not all of the novels could be adapted, either because they perhaps weren’t as glamorous as the style of the series or their settings didn’t lend themselves to television. One story is set in a cave, for example. “So we’ve been off-book for some time,” Eagger says. “This time, it’s a slightly different murder mystery as it’s about Peregrine discovering how to be a detective, whereas Phryne was pretty fully formed.”

Meanwhile, the decision to set the story in the 1960s was due to the producer’s desire to place Peregrine in another important era for women. “It’s another really strong decade for women, coming out of the 50s and suddenly there’s the pill, women working and coming out of the kitchen,” Eagger explains. “Like the 20s, the 60s is also a great decade for women, with a sense of independence and freedom. Whether that’s with the music or the fashion, there’s just a liberation that’s going on.”

In the title role is Hakewill, best known for her part in Seven Network thriller Wanted. Eagger describes the actor as “like Audrey Hepburn. She’s just brilliant and the 60s really suit her.”

On Peregrine, she continues: “She’s a bit different from Phryne. She’s more naive, she hasn’t got Phryne’s street smarts or wealth. She starts learning and we see her becoming a private detective as it progresses.”

Phryne had a flirtatious relationship with police officer Jack Robinson (Nathan Page) in the original series, and this element is replicated in Peregrine’s partnership with detective James Steed, played by Joel Jackson (Safe Harbour). “They’re both fantastic,” Eagger says of the leading duo. “The show has got that fun, cheeky element, even though it’s set in 1964. There’s the interplay between the two with the budding romance, but their dynamic’s quite different to Phryne and Jack. It’s the first time anyone has taken Peregrine quite seriously and she can actually come into her own. He’s quite ambitious too. Their relationship is of equals flirting but both don’t want to compromise where they want to be.”

With Miss Fisher’s Murder Mysteries going on to win fans around the world, it’s clear the spin-off is sticking to a winning formula. “It has the same flavours of fun and character and solving murders but it’s slightly different from Miss Fisher,” Eagger adds. “It’s a new cast and they take it on and create something that’s a new series in its own right – and Geraldine is absolutely a star.”