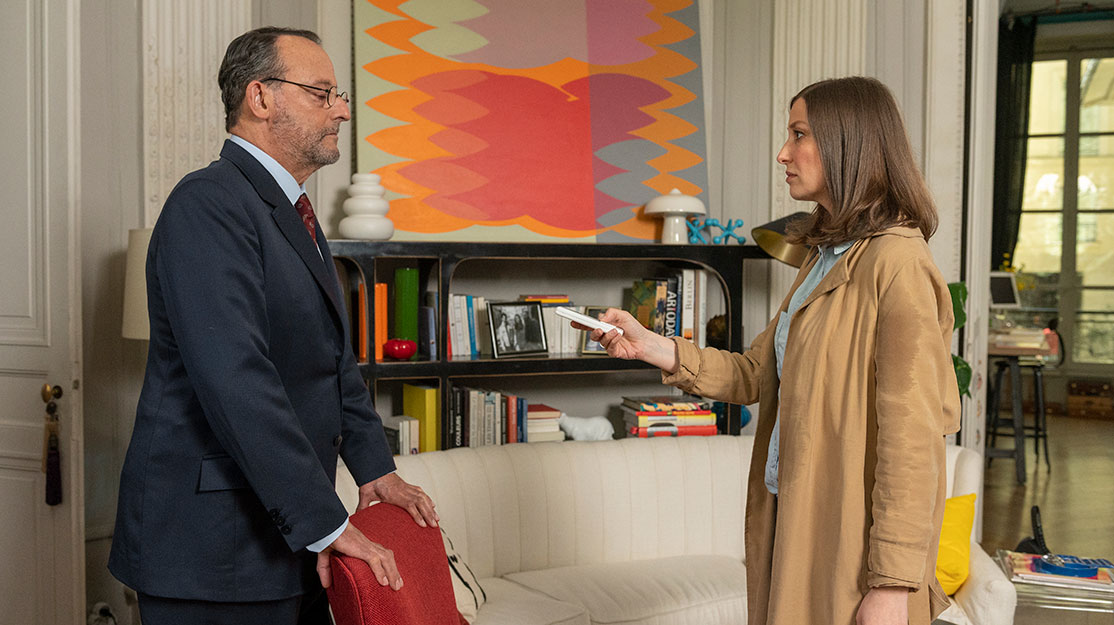 Actor Alexandra Maria Lara, director Miguel Courtois and producer Susanna Lea speak out about their collaboration on All Those Things We Never Said, a French comedy-drama that puts an unusual twist on a story about the relationship between a woman and her father.

If you lost a parent with whom you had a strained relationship, what would you do for a second chance with them? It’s a question that’s posed in comedic, dramatic and fantastical fashion in French-language series All Those Things We Never Said, which stars Hollywood actor Jean Reno (Léon: The Professional, Godzilla) as an android.

Based on Marc Levy’s novel of the same name, the 10-part, half-hour show turns a father-daughter relationship on its head with a story that travels across Europe.

Alexandra Maria Lara (Downfall) plays Julia, who cannot remember a time when she hasn’t had a difficult relationship with her father, Michel (Reno). Then three days before her wedding, she receives a call informing her he won’t be attending her wedding – because he’s just died.

Going from arranging a wedding to planning a funeral, Julia finds her father has one last surprise for her when she takes delivery of a large wooden crate. Inside is a life-sized android replica of Michel, who explains to her that he contains Michel’s memory and a battery life of seven days, after which ‘Michel’ will turn off.

Android Michel then convinces Julia to embark on a road trip, which turns into a quest to find Julia’s lost love and takes them from Paris and Madrid to Bruges and Berlin as they both seek to make up for lost time.

A coproduction between France’s Canal+ and streamer Lionsgate+ (formerly StarzPlay), the series debuted in France earlier this year and arrives on Lionsgate+ on December 15. Levy wrote the series with director Miguel Courtois (El Lobo) for producers TCC and StudioCanal, which is also distributing the show internationally.

When she first read the script, Lara says she was touched by the relationship between Julia and Michel, and the idea of them going on a “crazy” journey together. She also felt personally connected to the story, having lost her own father a couple of years earlier.

“Although I had a wonderful relationship with my father and not a complicated one like Julia in the story, it really spoke to me,” she tells DQ, speaking at the Monte Carlo Television festival earlier this year. “Marc Levy is a wonderful writer and it touched me when I read these dialogues between father and daughter – and of course, the prospect of being allowed to do that with one of my all-time favourite actors was just unreal. Who wouldn’t want to play Jean Reno’s daughter? I don’t know any actress in the world who wouldn’t have wanted to play this part.”

The two actors became friends thanks to the “intense” time they spent working together on the project. Lara says they shared a “very special connection” that made their performances on screen more natural than they otherwise might have been.

“We were like a little family for those three months that we were travelling together,” she says. “I just loved our crew and I’m still in touch with some of them. I basically just spent three wonderful months in France last year.”

But while she could already imagine how she might play Julia on screen after reading the scripts, the key to her preparation for the role was honing her French skills. “I’ve done beautiful films in France before but not with that amount of lines,” she notes. “To have these dialogues with Jean, who I so admire, it was particularly important that I felt comfortable with the language so I didn’t have to think about the technicality of it but could go with the feelings.

“I did have to prepare in a more intense way than I would usually in English or German, but we spent a lot of time rehearsing together privately. There was a room in our hotel where would always meet and prepare for the next day and talk about life. I knew how I wanted to play Julia; it was more a case of making sure the language was there when I needed it.”

With a deep love of languages and experiencing new cultures, Lara was more than happy to put in the work. In fact, she credits German film Downfall – in which she played Adolf Hitler’s secretary in a story about the Nazi leader’s final days – as the project that opened doors for her to work in other countries such as France, the UK and US.

The friendship fostered between Lara and Reno mirrors a similar relationship between author/screenwriter Levy and director Courtois, only the latter dates back more than 20 years. Two years ago, having previously collaborated on a TV show called Où es-tu? in 2007, they decided over one of their frequent dinners together that it was time they reunited for a new project. Levy suggested Courtois read his novel All Those Things We Never Said, and when the director agreed it was the right project, they got to work on the scripts.

“The first job we had was to adapt a book taking place in the US and Canada in which people write letters to each other all the time. I thought that was not something good visually, but I didn’t want to betray the gist of the book, which is very interesting,” Courtois says. “I made a first draft, he made a few kind comments and then we continued working together. He amended the dialogue, because he’s very gifted at that, and this is how we managed to work together in a fully fledged partnership.”

StudioCanal committed to the project very early on, and Courtois says he has never had such freedom as a director on a project as he did on this series. “It was pure happiness,” he says. “But I was also protected by the producers. The production was really pleasant. It’s been a long time since I had something like that.”

Producer Susanna Lea picks up: “When you’re bringing people together from all around the world, we just had to make sure that, at the beginning, everyone had the same goal, wanted to do the same series and had the same demands of quality and ambition. StudioCanal got behind the project immediately and they found incredibly receptive and supportive partners in Starz.

“We were also doing this at a time of Covid, and we managed to do it without one day of stoppage, filming in Germany, Spain, Belgium, France… it was a miracle. We adapted to all the different rules and regulations and demands, but coming out of confinement, it was one of the first big productions. We were all still wearing masks and getting tested every day, but there was a sense of excitement that we could make this happen – and we did.”

In production, Courtois then worked with Reno to portray Michel a naturalistic way, rather than as a disjointed, mechanical humanoid.

“Jean works very much by ear; this is why he is the way he is,” he says. “I wanted to let it flow to make sure he would play it the way he felt and I didn’t want him to stuck to this idea of playing an android. We worked on the character as if it were any other kind of character. As the audience, you know he’s a robot, but he hasn’t played the part as an android because otherwise the audience would not identify with the emotion.”

It’s that emotion running through the heart of the series, and between Julia and Michel, that Courtois believes makes All Those Things We Never Said a universal story.

“Everyone has parents and, once they pass away, we think, ‘If only we had some extra time, we could solve these issues or just say we love each other,’” he says. “There’s no need to adapt to any specific country or culture because this is something that could happen to anyone, anywhere.”