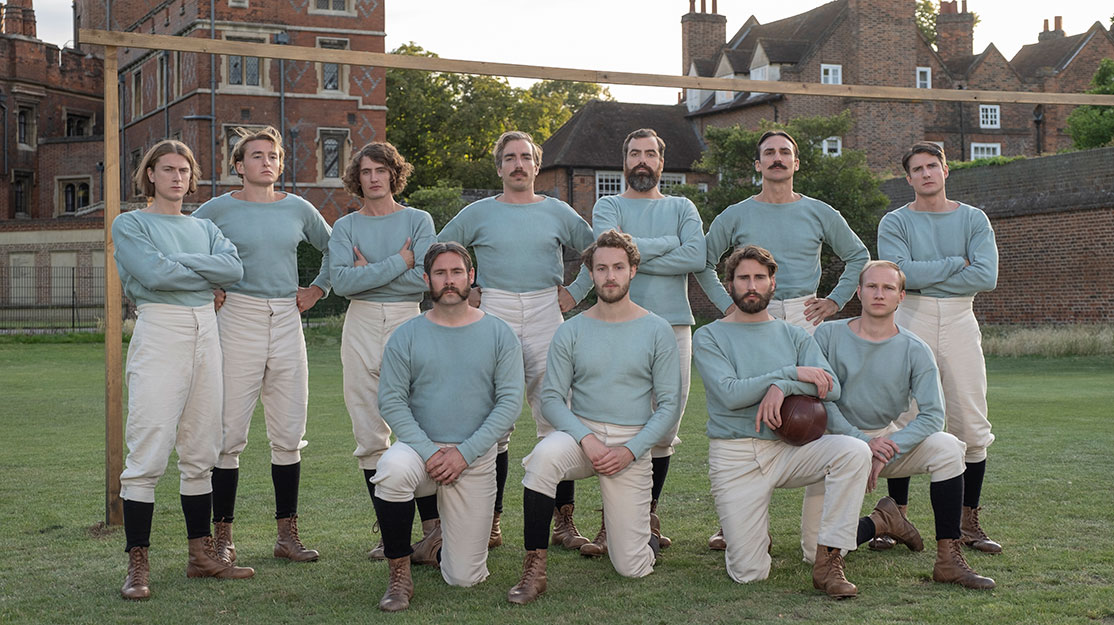 Downton Abbey creator Julian Fellowes turns his hand to the origins of football in his latest period drama, Netflix series The English Game. DQ discovers why it will appeal to fanatics and non-fans alike.

With the sporting calendar on hold around the world amid the coronavirus pandemic – seeing some teams resort to ‘playing’ each other via games of noughts and crosses on their Twitter accounts – football fans, at least, will soon be able to turn to the most unlikely of sources to get their fix: the man behind Downton Abbey.

Arriving on Netflix this Friday is six-part drama The English Game, written by Downton’s Oscar-winning creator Julian Fellowes. The miniseries promises to reveal the true story behind the origins of the world’s most popular sport, taking viewers back to the 1880s and the much rougher game that would eventually evolve into what the Americans call soccer.

This being penned by Fellowes – who so expertly explored class via Downton’s ‘upstairs/downstairs’ dynamic and treads in similar territory with newly launched ITV drama Belgravia – issues of class are integral to the storyline.

The story is one that Fellowes and co believe will be unfamiliar to the majority of those interested in football. It delves into how a game that was originally the preserve of the upper classes came to be dominated by the working man, with mill owners forming teams consisting of their employees.

The drama centres on two real-life football pioneers from opposite sides of the divide. Arthur Kinnaird (Edward Holcroft) is the captain of the Old Etonians football team, versed in the established, rough-and-tumble style of the game, while Scotsman Fergus Suter (Kevin Guthrie), brought south of the border by a mill owner, brings with him a fresh, passing-focused approach.

For the former, football is a gentleman’s pastime, while Suter is among the first people to be paid solely for playing the game.

As you might have guessed, Kinnaird and Suter find themselves on a collision course as they prepare for an all-important match between their two very different teams that means so much more than just the result.

“I don’t think I could really be described as a big football fan,” Fellowes admits with a knowing smile, revealing that it was the class conflict behind the story that drew him to the project.

“I didn’t know that there was this class war at the beginning of the game. The fact that the working class essentially won it changed the shape of the game and gave it to the world. It appealed to me because it was a drama-in-miniature of what was happening in the whole of Western civilisation towards the end of the 19th century.”

It’s not just on the pitch that class is tackled in The English Game, with Fellowes detailing how he regularly uses group dining scenes to explore the issue. “There’s usually a dinner or a lunch or something in most of the things I do, because then you can tell so many stories simultaneously,” he explains.

During one such dinner in the show, some of the upper-class characters lament the fact that workers are being paid to play football. “They’re saying it’s not fair, but Kinnaird points out that none of the workers have ever eaten a dinner like the one they’ve just eaten; none of them have the time to practice that they have; none of them have two or three days a week off – or even the whole week – to do what they like, so is that a fair balance? And the answer is, of course, no.

“You can say that visually very easily in a very lavish dining room full of flowers and silver gilt. You don’t even have to put the whole thing into words.

“It’s two sides against each other, but on each side you have a guy who comes to see the other’s point of view. That’s really the arc of the show.”

Unlike Fellowes, executive producer Rory Aitken is very much a fan of the sport, but he was equally unaware of the tale behind its origins. “I didn’t know the story either. And I hadn’t seen anything like it on television, so I was as excited as anyone to delve into the history and discover it,” says the producer from 42, the UK-based prodco behind the show.

The project had initially been conceived as a feature film, but the creative team eventually decided that the many layers to the story made it more suited to the longer format of a miniseries.

“It’s notoriously hard to make any drama films about sports, because you can see amazing dramatic sports on television every weekend, pretty much every weekday now,” Aitken notes, speaking before the coronavirus-enforced sporting lockdown.

“So really to see how it plays out in a dramatic context, other than on the pitch, is something that we realised could work as a TV drama. And Julian is as much of a historian as a drama writer, and really understood that period and how to dramatise it.”

One of the main challenges of featuring sports in drama is realistically recreating the action on screen. To that end, the production faced the unusual task of finding cast members whose acting chops were matched by their footballing ability.

Thankfully, in Holcroft and Guthrie, The English Game found leads who could back up their words. “The audition process was mainly about the scene work, but I’m fortunate in that I was quietly confident in my ability,” says Guthrie, who reveals he was a youth player for Glasgow club Celtic.

“So for sure there’s a background there, and I play football a lot, as a lot of actors do. We’re in and out of work, so that’s probably the reason why.

“The most challenging thing was actually dumbing the skills down a bit, as arrogant as that sounds – being able to make just passing the ball look difficult.”

Holcroft faced different physical requirements as the captain of the Old Etonians, whose version of football he describes as “more like a relaxed version of rugby.”

“There wasn’t a great deal of skill. When we did the audition process, I remember that it got down to about two or three of us for the role, and that’s the worst time for an actor, because it can either go so well or it can be crushing. And then I kept getting calls [from the casting team] in the next few days going, ‘Can we just find out – how good are you at football?’

“It really freaked me out, because I was thinking, ‘What if they want someone who’s professional?’ But actually, when we started, it was like, ‘Forget everything you know – forget all the football you’ve learned.’”

With the cast in place, an intense and prolonged period of training was needed before the production could shoot the tightly choreographed match scenes. Football experts and historians were brought in, and the production team were allowed access to Manchester United’s Carrington training facility to fine-tune their preparations.

“They all had to train all of the moves that we had in the show. In some ways, that was the most challenging part of the shoot, because shooting footballers is slow and technical. It was months of training,” Aitken explains.

“Also, they weren’t only training all the moves, they were training to play in the style they would have played in the 1880s, which was incredibly different to how it is now. The equipment was different, the boots that they wore… In fact, only the Old Etonians had actual football boots – the workers played in their work boots.”

Describing training at Manchester United’s facilities as “exciting,” Aitken adds: “One of the trainers there is a football historian himself, so he immediately knew who everyone was [playing].”

The meticulous preparation apparently paid off. “When it came to filming, they were incredibly well drilled,” Aitken says. “There weren’t too many takes, and you’ve got to be precise because otherwise you’re filming everything 15 times.”

All this helps to realistically bring to life a story that Fellowes believes will appeal to both football fans and those with no real interest in the sport.

“You know, it’s true. I always say, when the stories are true, they have a kind of resonance,” the writer says.

Having clearly enjoyed delving into a different subject, who knows – maybe more sports-origin series will come from the Downton scribe. Bog snorkelling, anyone?