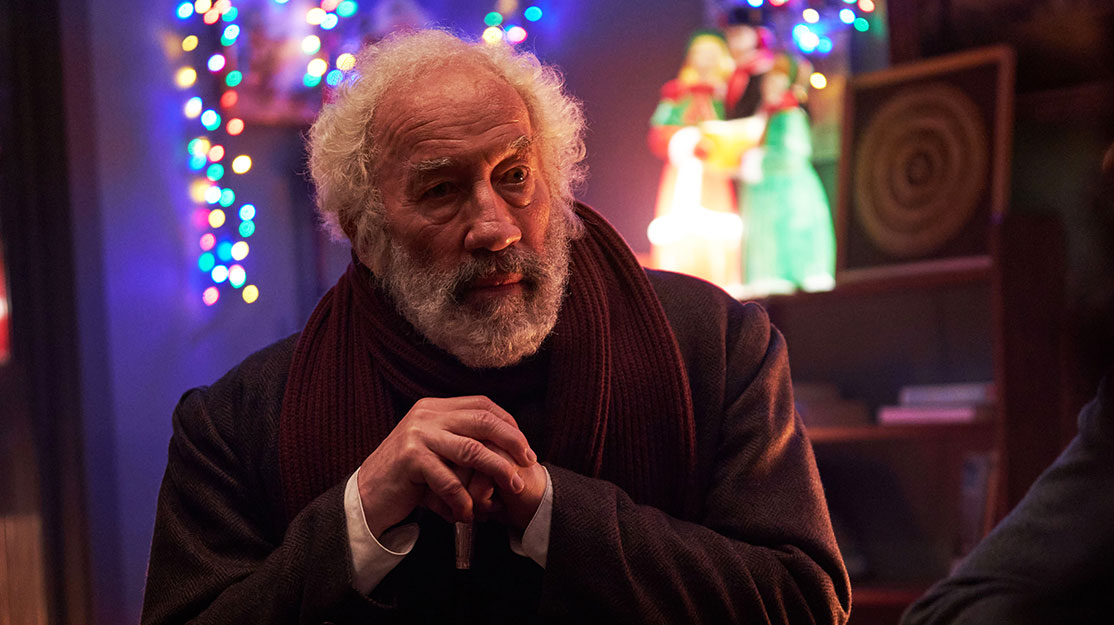 Actor, writer and director Mark Gatiss and the team behind The Amazing Mr Blunden tell DQ why they were inspired to remake this beloved story, which serves up a festive blend of ghosts and time travel.

A Christmas ghost story on the BBC from Mark Gatiss, the star known for his on- and off-screen work in series including The League of Gentleman and Sherlock, has become as traditional as mince pies and mulled wine in recent years. In 2013, he wrote and directed an adaptation of The Tractate Middoth, MR James’ tale about a young student who is drawn into a family feud when a relative comes to find a mysterious book.

Original story The Dead Room, about a radio presenter who is confronted by his past, followed in 2018, before another James adaptation, Martin’s Close, aired in 2019. A third James story, The Mezzotint, is lined up for this Christmas.

But this year, Gatiss is set to go one step further with a second festive, feature-length project. The Amazing Mr Blunden, which he has written and directed, is based on the novel The Ghosts by Antonia Barber and the 1972 film of the same name.

When London teenagers Jamie and Lucy Allen meet a mysterious old man, Mr Blunden, he offers their mum the opportunity to become the caretaker of a ruined country house – one that’s said to be haunted. There, Jamie and Lucy encounter a pair of ghost children, but Sara and Georgie aren’t actually ghosts. They’ve travelled forwards in time to seek help, believing they’re going to be murdered by the wicked Mr and Mrs Wickens – and Lucy and Jamie’s strange visitor seems to be the key to it all. With his help, they must travel back to 1821 to save Sara and Georgie and redeem their remorseful new friend, The Amazing Mr Blunden.

Gatiss also stars in the film as Mr Wickens, with Simon Callow (Shakespeare in Love) as the titular Mr Blunden and Tamsin Greig (Friday Night Dinner) as Mrs Wickens. It is produced by Richelle Wilder and Isibeal Ballance from Adorable Media, which produces in association with Sky Studios. Adorable previously worked with Gatiss on The Dead Room and Martin’s Close.

“I saw the film when I was at school, when I was about seven or eight, and I’ve always adored it. It’s everything I love – it’s Christmas, ghosts, time travel and a touch of melancholy magic,” Gatiss tells DQ. It was then over lunch that Wilder and Ballance revealed they had optioned the rights to the novel, with Wilder also a fan of the original film.

“The more we talked about it, the more excited I got,” Gatiss says. “I went back to the book and thought, ‘Well, it’s interesting that in the original book they’re a modern pair of kids who go back in time, whereas in Lionel Jeffries’ 1972 film, it’s set in 1918.’ I thought that was worth exploring. And secondly, it’s not at all cynical, but the thing is it’s a 50-year-old film and, however wonderful it is, it is difficult to cut through these days. The idea of telling the story again for a new audience was very appealing. We all got very excited about that.”

As a writer of several adaptations, Gatiss now has his own trusty process: buy two copies of the book and break their spines. “It’s a horrific moment,” he jokes, “but you have to do it because you can’t be constantly turning the pages.

“People often say short stories make better movies, and it’s true. If you have a great, cumbersome book, it’s quite hard to get it all into two hours, but this is quite a nice size. It’s a slim, family adventure children’s book, and I knew what I loved about the original. I knew what I wanted to retell and, equally, the bits that might be less familiar or could do with the slightly more modern spin.”

“We were all familiar with the source material and we all knew what the emotions were that we wanted to get for our audience,” Wilder continues. “Mark and I have a tendency to well up in the same moments, which is very embarrassing, so we know where the poignant moments are. Mark’s adaptation hit all of those moments and added new ones that were relevant to us, were surprising and were actually more evocative than the original film. We just knew we were on the same track.”

Filming took place on location at Langley Park in Buckinghamshire and a Georgian mansion house called Finchcocks in Kent. Other scenes during the 25-day shoot were captured inside a South London warehouse that doubled as a studio and at a disused shopping centre.

“It was quite a phenomenal experience,” Ballance says. “Covid adds a hum of added stress throughout the entire production. You’re constantly worried because, in effect, we had quite a small cast. We were leaning a lot on our leads, but the crew were fantastic and the atmosphere was great. That goes back to how Mark directs – it’s not a stressful set environment; it’s very calm. Everyone knows exactly what they’re doing. We had some big, big days with fire sequences, we had lots of special effects and firemen, and kids. We had to be very calm and do it in a very controlled manner, and it looks fantastic. We’re very lucky.”

On set, “I’m a brutal and cruel director!” Gatiss laughs, recalling how he had to direct himself while dressed in period costume as Mr Wickens. “There’s actually one scene I wrote myself out of because I realised it was going to be impossible, and when you watch the scene, I literally leave in order to direct it. I just walk out of the door and walk round the back of the set to carry on.”

Charged with creating costumes for two different time periods was designer Helen Bolter (Houdini & Doyle), who was in the unusual position of requiring both contemporary and Regency styles in some of the same scenes. Her task was made more difficult by the fact the UK screen industry is currently booming, leaving her unable to use a costume facilities truck as none were available.

“My main consideration was that I wanted the colours used for the 2021 children to be completely different from the colours used for the Regency costumes, but to still sit in the same frame and work together,” Bolter says. Mr Blunden’s look needed particular consideration, with Bolter not wanting his outfit to immediately seem completely out of place in 2021 when he first appears. And while Regency clothes were predominantly black and white, these were two colours Bolter wanted to avoid using entirely.

“As the film includes time travel and ghosts, I figured that gave me licence to be slightly looser with the period accuracy,” she says. “Mr Wickens, for example, wears an original pair of railway glasses from the 1860s, too late for the period, but they just look so wonderful for his character. There are a few decisions we had to make that may upset the true historians, like Mr Blunden’s ghost not wearing a hat, but we decided there was no way of him wearing a top hat in the present day without drawing attention. It makes sense in the end, as his ghost is dressed exactly as he died, but you have to wait for the end of the film to see that.”

Similarly, hair and make-up designer Jutta Russell (London Kills) wanted to create a timeless look that paid homage to the original Mr Blunden film but that was also distinctive – an ambition that was helped by extending the time jump in this new film from 100 years to 200.

“For me, the four children and Mr Blunden are central to the story and they are the binding link between the 18th century and present day,” Russell says. “These characters ‘transcend the time zones’ and, although they are distinctive in their own right, they also had to work visually together once they met. The rest of the adults stayed in their respective time zones.

“I also tried to give the characters a timeless feel. I did not want to date the show with a specific fashion look, making them relevant and believable, without dating them, for many years to come. I did like the contrast between the modern-day and the period characters and making them all work together in a believable way. This is rather unusual, as normally all characters are set in the same time zone and don’t transcend time zones.”

Production designer Chris Richmond’s biggest task was transforming the show’s manor house for two different time periods and working out which set pieces should be built for the house before and after a big fire that features in the story, as well as when Mother Nature reclaims it in the present day.

“We recreated a central section of the Queen Anne manor house, both internally and externally, on a stage, including building the main double-height hallway, the library, a drawing room and the second-floor nursery and corridor, and then we digitally extended these into the physical location,” Richmond says. “Any areas that were required to be set alight [in a controlled environment] were then distressed to appear post-fire 200 years later.

“With shooting taking place in Covid times, and due to its small dimensions, we also built the interior of a multi-storey London flat in the studio. Our location work also took us to Kent and Finchcocks, where we used their exterior and grounds to set the scene and add any exterior wide establishing shots.”

The fire that takes place in the story meant The Amazing Mr Blunden stood out from projects on which Richmond has previously worked, such as The Sister and Catastrophe.

“Over a five-day period, we needed to think about everything from the extraction of smoke and fumes to the potential dangers of roof burn and, even, collapse of the stage,” he recalls. “Having previously designed for major burns on an exterior location, this was our biggest challenge. But with careful design and a brilliant art department in support, this was also a great success.

“The infectious excitement of introducing Mark Gatiss onto the sets will be the memory I take from this project – an absolute joy and pleasure.”

As a family-friendly Christmas adventure, which debuts on Sky on Christmas Eve, The Amazing Mr Blunden is best summed up by Gatiss when he pitches it as “a Christmas ghost story – with time travel.”

“An awful lot of people have never heard of it, which is a source of great regret because it’s a beautiful story,” he says. “But like all great stories, it can be retold in a different way. I hope what we tried to capture is exactly what appealed to us about the original. It’s kind of bittersweet. There’s a lot of sadness in it. But like A Christmas Carol, there’s a redemptive element to it, which is very moving, and it’s an awful lot of fun.”