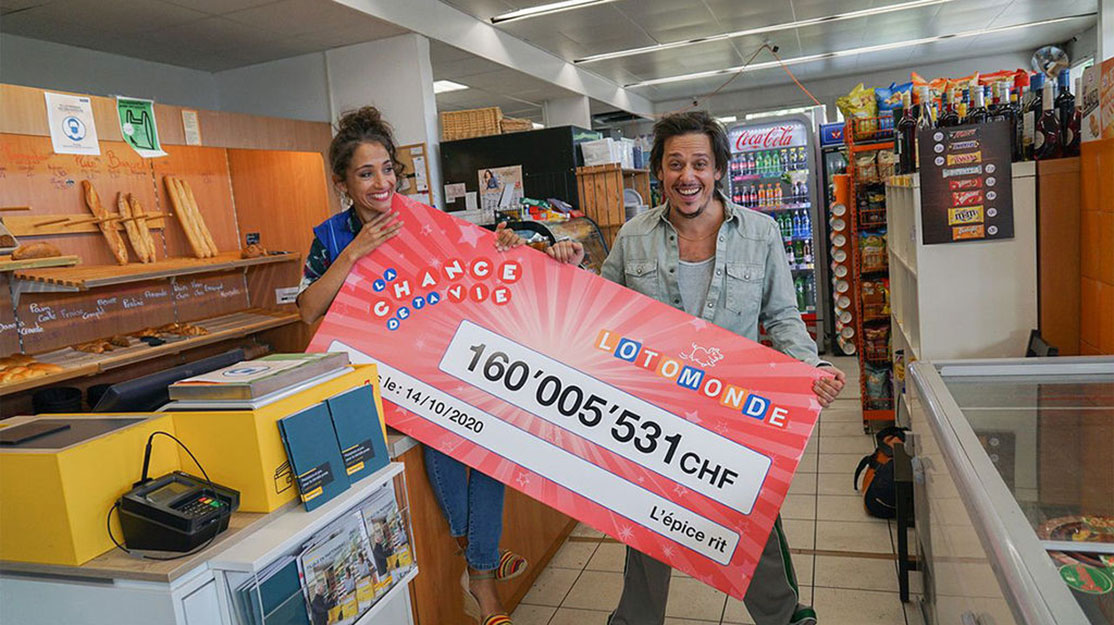 Over the course of a decade, French writing duo Vincent Poymiro and David Elkaïm have tackle societal issues through various genres, from seminary-set political drama Ainsi soient-ils (Churchmen) and En Thérapie, an adaptation of Israeli psychology drama BeTipul (In Treatment), to upcoming Netflix thriller Gone for Good, which is based on the Harlan Coben novel of the same name.

But La chance de ta vie (Lucky Day), a comedy about a family that wins the lottery, is certainly their wackiest and most outlandish to date. The Swiss series follows the Froideveaux family – inept schemer and failed entrepreneur Loïc (Karim Barras), plumber Loane (Zoé Schellenberg) and their two children – as Loïc, in a characteristic gamble, decides to blow his father’s entire weekly pension on lottery tickets.

It proves to be his lucky day, however, as they soon discover they are CHF160m (US$174m) better off. And although the lottery’s wealth advisor encourages caution, it’s not long before the family have knocked up an enviable shopping list and Loïc has whisked them away from their humble rural life to a five-star suite in a Genevan hotel.

It’s there that he meets Jean-Hubert, an ill-qualified financial advisor who vows to help the family grow their fortune. But Loïc has other ambitions – to bring down Montrex, the prestigious watchmaker who fired his father after years of good service.

Acknowledging the eclecticism of his work with Elkaïm to date, Poymiro says the writers are atypical of their homeland: “In that way, we are not that French. We don’t have an aesthetic signature. We don’t feel committed to tell a certain type of story every time with a certain point of view on the world. But the link is the fact we are really precise about social questions. En Thérapie is about French society after the attacks on Paris. Churchmen is about being committed and wanting to change the world in many ways. Even Lucky Day is about society, such as family and how it is put to the test by money, which is the centre of modern life.

“In a way, we are not stylistically coherent because the point of view, the focus and the tone we want to explore about society need to change to explore all those possibilities. That’s why it could seem really different. But at the core of our preoccupation as storytellers, there’s a real question about what it is to be together.”

Lucky Day first came to Poymiro and Elkaïm around four years ago when filmmaker Christophe Chiesa approached them with an idea about what would happen if a family from the Swiss countryside won the lottery. The writers were immediately hooked by the character-driven premise and began developing the project with Swiss broadcaster RTS, which was taking a gamble of its own with the eight-part series.

“It’s been a long time since they have done a real comedy, something really funny and full of satire; a screwball comedy, not a dramedy,” Poymiro tells DQ. “They wanted to be sure everything was in order. It took a little time to find the right director and we found one in Chris Niemeyer [Der Bestatter], who did the whole show and was a great director for us. Then the pandemic arrived. It took a little more time than we thought in the beginning, but it was for the best.”

The topic that most interested them, says co-writer Anne Feinsilber, was to question what holds this chaotic family together and whether that ‘cement’ would still hold when they become rich. “It’s this question of how does money reveal who people really are? That’s what we were going after,” she says.

Taking centre stage is Loïc, who has a container in his father’s front yard filled with LED Christmas trees – the remnants of his latest failed get-rich-quick scheme. “He’s so unlucky but so willing,” says Poymiro. “The idea was to use money as a way of revealing first the family but also the society around them. What could be the consequences of having the possibility to realise what you really want? Once you talk about money, everything is put to the test, so what do you really believe in as a collective as soon as a single individual is allowed to do almost anything?

“Of course, what Loïc does is take them all to Geneva with the idea of taking revenge on Montrex for the humiliation his father suffered when Loïc was a child. This is what starts the story. He decides secretly from the rest of the family that they will settle in Geneva and go into business to get revenge. He’s such a strong-willed entrepreneur but such a bad entrepreneur that it will cause massive consequences.”

Because the series is a comedy, the writers have identified the basic human emotions felt by the characters at every stage and then exaggerated them to their limits. Loane is regularly pushed to the edge by Loïc’s impetuosity, while the couple’s desire for intimacy sees them visit every room in his father’s overcrowded house in search of some privacy.

“A character in a comedy is funny because he’s capable of anything, like Loïc. He’s someone who’s exactly like all of us in terms of feelings, desires and fears,” Poymiro notes. “But the way we are looking at it and exaggerating it makes the comedy. It’s logical, but a logic that is pushed to its very limits.”

The writers drew inspiration from shows such as Malcolm in the Middle, Shameless and The Riches, as well as classic British and Italian shows. “We were never trying to restrain the madness and the capacity of the characters to do really crazy things, but we were always starting from really recognisable feelings we can all identify with. Our characters are not clowns. They are real human beings, they’re just a bit ‘more’ than we are, and it’s joyful to see people putting themselves in situations we would never dare to do. You get some comic relief because they do what you would like to do but would never dare.”

Poymiro describes two phases of writing the series. In the first, he and Elkaïm created and conceptualised the show before being joined by writers Julien Anscutter and Geoffrey Bidaut, who would pen two episodes each, while Poymiro and Elkaïm picked up the other four. Feinsilber then joined the writers room for phase two, which also included a search for an experienced comedy director to helm the series, resulting in Niemeyer coming on board.

“There were also budget questions, so we had to rewrite the project. We spent a long time thinking about it with Chris and with Anne, who joined the team at that moment,” says Poymiro. “We took the chance we had to rewrite it and focus more, if possible, on the themes and on making the comedy more accurate.”

“We exchanged ideas and talked about the characters,” continues Feinsilber, with some characters cut and storylines changed. “That was the most essential part for us. So once you start writing your episodes, I wouldn’t say it writes itself, but it almost does in the sense that you are very clear about who the characters are, what the situations are and, most importantly, what the conflict is.”

While Feinsilber jumped at the chance to work with Poymiro and Elkaïm, she admits writing comedy doesn’t come easily to her. “It was a real job, but I was interested in exploring the family and this question of what makes a family,” she says. “This series was really an opportunity for that. But it’s not only about the family in terms of who you marry or who your children are but also, more widely, the family you choose for yourself.”

The foundation of this family is Loane, who puts up with Loïc’s harebrained schemes and supports their children while also working as a plumber. Creating comedy that is specific in its setting and rooted in emotions while simultaneously being revealing and amusing proved particularly challenging when it came to Loane, who Poymiro says is in love with Loïc but needed to be interesting and compelling on her own and without reducing the madness of the family.

“Zoé brought her own point of view and she even fought with us on certain points – and I think she was right,” says Feinsilber. “Loane is holding this family together. She’s the caregiver, but she has a role of her own. Once we had the idea of making her a plumber, it helped us tremendously to define her. Zoé took her a step further.”

Filmed during the pandemic – scenes in a nursing home and at a party had to be rewritten to avoid large crowds on camera – the series is set to launch on RTS in September. About Premium Content is distributing the show, which is produced by Idip Films and Perpetual Soup and had its premiere last month at French television festival Serié Series.

It is by tapping into universal themes within a specific setting that Feinsilber hopes the story of the Froideveaux family will also attract international audiences. “Underneath the comedy, we tried to make it very real and very specific,” she says. “That way, we hope it becomes universal.”

Poymiro adds: “The more specific you are, the more universal you can get in comedy, specifically in terms of using money as satire and talking about contradictions in society. I hope what we have done is make people laugh all over Europe. If we did our job properly, we should be able to make other people laugh than the specific audience of Swiss television and French television.”