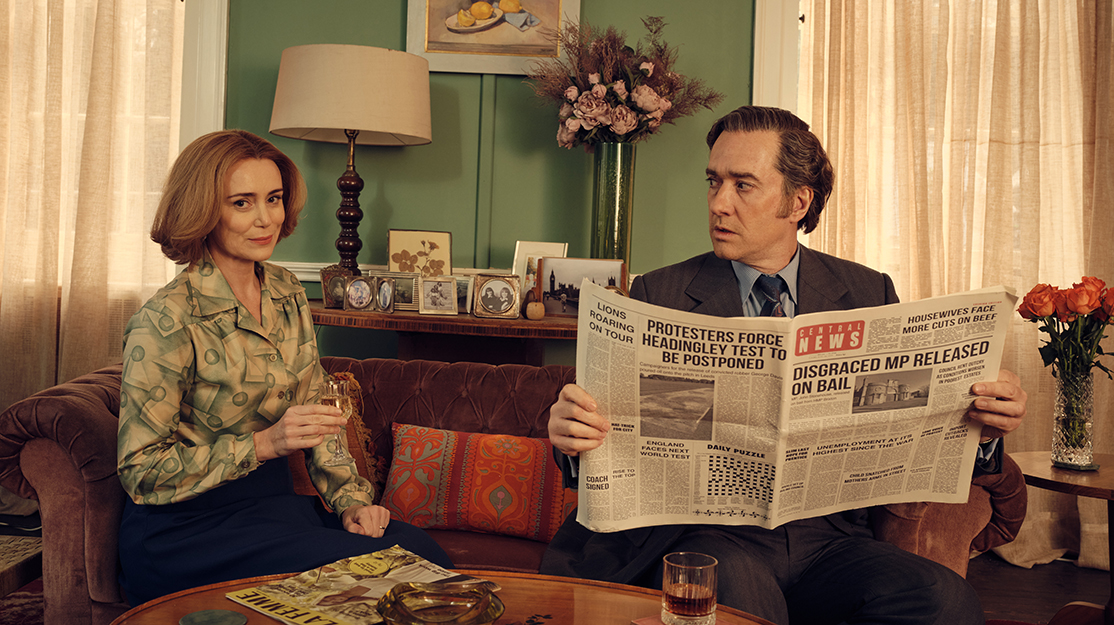 As a feature film director, Jon S Baird is best known for Stan & Ollie, on which he partnered with stars Steve Coogan and John C Reilly to tell the story of legendary comedy duo Laurel & Hardy.

For the small screen, he has also shot episodes of Feed the Beast, Vinyl and Babylon. And now, for ITV drama Stonehouse, he has directed every episode of a miniseries for the first time, bringing to life the fascinating and incredible true story of a disgraced politician.

Succession’s Matthew Macfadyen stars as John Stonehouse, a British MP and high-flying member of Harold Wilson’s Labour government who vanished from the beach of a large luxury hotel in Florida in November 1974, leaving a neatly folded pile of clothes as he swam into the sea, intent on faking his own death.

Leaving behind his loving wife and their three children, Stonehouse is presumed by a shocked public and media to have drowned or been killed by sharks. But evidence soon emerges of his secret life – an affair with his secretary, complex financial misdeeds and his attempt to start afresh in Australia using the identity of a recently deceased constituent – and Stonehouse is found alive and well on the other side of the world. Twenty years later, it is also revealed that he began working as a spy for the Czech secret service in the 1960s.

The three-part drama, which began on ITV on Monday and concludes today, is produced by Snowed-In Productions and Clearwood Films, with Banijay distributing. BritBox International will air the series in the US, Canada, Australia, South Africa, Denmark, Sweden, Finland and Norway.

Here, Baird tells DQ about his interest in Stonehouse’s story, working with Macfadyen, finding the story’s comedic tone, and recreating both Miami and Australia in the Spanish town of Malaga.

Were you already familiar with John Stonehouse’s story?
I had never heard this story at all, let’s be honest. I’ve always been interested in true stories and in political stories, and I had just said to my management, “I love all these mini-dramas that are going out, these three-parters. Is there anything you think would be good for me?” Then the next week, the Stonehouse script came in, I had a call with the producers and Matthew, and we were away. So it happened really quickly, but I didn’t know the story before reading it.
It was a lovely script and John Preston was very open for me to come and work with him on the script as well. I loved the tone of it – the darkly comedic, almost surreal nature of it –and this outlandish character. I’m always drawn to characters that one minute you despise and the next minute you fall for. Stonehouse is a little bit like that.

How early did Macfadyen, who is also an executive producer, join the project?
Matthew was attached when I got the script sent through. Keeley wasn’t attached, but on the first call we had, they said, “We’ve got this really radical idea that Keeley should play the wife. She should play Barbara.” And my initial reaction was, “Oh, I don’t know about that.” Then really quickly I was like, ‘Well, it’s not like they’re playing love’s young dream or having this great time. They’re at each other the whole time,” and I thought that was even more interesting to do, especially when he’s having an affair with a younger person. I thought that could work really well. But Matthew was attached at the beginning and everybody else came after that.

From the outset, there is a light, comedic and even farcical tone to the story and Stonehouse’s behaviour and actions. Was that clear from Preston’s scripts?
You definitely feel the hints of comedy in the scripts. By casting somebody like Matthew, you have someone incredibly funny so that elevates it. The music – by Stan & Ollie composer Rolfe Kent – was very playful as well, and the colour palette we decided to go with also pushed it towards a heightened sense, which is really interesting when you’re doing a true story.
When you look at episodes two and three, there are some characters who come into it who weren’t as funny on the page but, through casting and rehearsals, we made it a little bit funnier. But certainly it was definitely there to start with; we just pushed it further. Then by episode three, it does get really emotional. The three episodes are all quite different from each other, so the tone bobbles along from fun to emotional at different points.

Episode one begins with Stonehouse walking into the water in Miami to fake his own death. How did you want to tell his story?
Everybody who knows about this story knows he’s a former cabinet minister who decided to fake his own death. That’s the selling point, and everything else comes from that. But we delved more into not just that but also the real reasons and the relationship with his wife, the affair he has, the fact he was accused of spying for a different country and his questionable financial dealings.
We really wanted to dig down into the reasons somebody would go and do such a bizarre thing – it’s really quite outrageous – and how he went about getting the identity of the person who he ‘became’ after he faked his death. We talked with the actors, Matthew especially, about how Stonehouse really felt like he was starring in his own movie. You see him when he’s at the Czech embassy and he thinks he’s in a Bond movie – that’s who he thinks he is. But he’s a really crap James Bond.

As a director, how do you prepare for a new project?
You’re always learning and you learn more on every job. We did a lot less coverage on this and we shot things more in wide shots. We didn’t do so much cutting and close-ups; we just let it breathe a little bit more. I also didn’t rehearse on this one as much as I usually do. We just sat down in the rehearsal room and read the pages.
On Stan & Ollie, the rehearsals were four weeks long because we had to really get Steve Coogan and John C Reilly into these two characters everybody knew so well. There was a lot of comedic dance rehearsal and we had a comedy movement coach as well, who was exceptional. This one was different – we just had fun in the rehearsal room. We read through the scripts and then we saw each other a couple of weeks later and started shooting.
The actual prep we had with the crew was just as much as I usually do, but it was really challenging to build the House of Commons. The production designer, Darryl Hammer, did a fabulous job because we had to rebuild that in a school hall in north London. That was something we put a lot of our resources into, because he was an MP and we had a lot of scenes in the Commons. So we thought, ‘Let’s go for it.’ We also put a lot of money into the background artists to make it look as good as possible.

Where else did you film?
We were only in London for two days. Coventry was really where we based ourselves. We took over a college that had recently closed down and we used it as a studio. We got a lot of the Australian interiors and the Miami interiors in the middle of Coventry.
Miami Beach was Malaga. We went there in March last year thinking it would be beautifully sunny and it pissed with rain every day. We were doubling up for both Australia and for Miami with a week in Spain, so we stole little moments when the sun came out. When Matthew went into the sea, we only had two takes because we couldn’t get any more with him, as it was so cold. The rest of the crew were wearing these dry suits and this poor lad had to go in with his trunks and froze.

Were there any other challenges?
Covid, obviously. We filmed from January to March last year, so we still had Covid [restrictions] in place. It wasn’t as bad as it had been previously, but it was a little bit involved. We [had a few people test positive] but it wasn’t as bad as it could have been. There were just the usual challenges, but the weather in Malaga was our biggest challenge.

What was the appeal of taking on a three-part miniseries?
It’s more like doing a film. If you get involved in a 10-parter or you’e coming into an existing series, that’s not really my thing. You very rarely get to do all of the episodes, so you’re splitting it with other directors. At least with a three-parter, you do it all yourself, so it’s very much your thing. You very much author it and I prefer that, but I’d never done a miniseries like that before. I was just very lucky that the first one that came along was of high quality and the actors were of an equally high standard.

After working with Coogan and Reilly on Stan & Ollie, did you want Macfadyen to impersonate Stonehouse?
Matthew and the make-up designer did research into his physicality, but we probably took a lot more licence with Stonehouse because he’s less well known and because we wanted to make it slightly more comedic as well. Stan Laurel and Oliver Hardy are obviously national treasures, so that was the difference really. Plus a lot of people know the Laurel & Hardy routines and the dances, so they were replicating films that had been made about them. We had to be very precise with those comedic routines. On Stonehouse, it was less pressured in respect of getting it spot-on because of audience awareness of the different characters.

Why do you think this story will resonate with audiences?
I just think they’ll have a lot of fun watching it. It gets really emotional as well. Something I learnt about before was if you want to make people cry, you have to make them laugh first – and that’s something we managed to pull off. It’s also going out at a time when it’s cold and dark, and it’s about a very flawed politician – we’ve got enough of them in the country at the moment. There are some parallels to today, and people are probably a little bit more aware of politicians than they were 10 years ago. They’re trying to create massive personalities from themselves and see themselves as film stars or whatever. This is the story of another narcissist who probably shouldn’t be in the position they are in.

Is John Stonehouse a sympathetic figure?
Audiences are far more sophisticated now than they used to be, so they can have a hero or anti-hero and still follow their story and feel empathy towards them because they’re just displaying human traits. But our master stroke is having Matthew there. He’s a very likeable actor. He’s somebody people warm to, and the comedic tone takes the edge off the dastardly things Stonehouse does. It’s easier to follow a character if you can laugh at them.