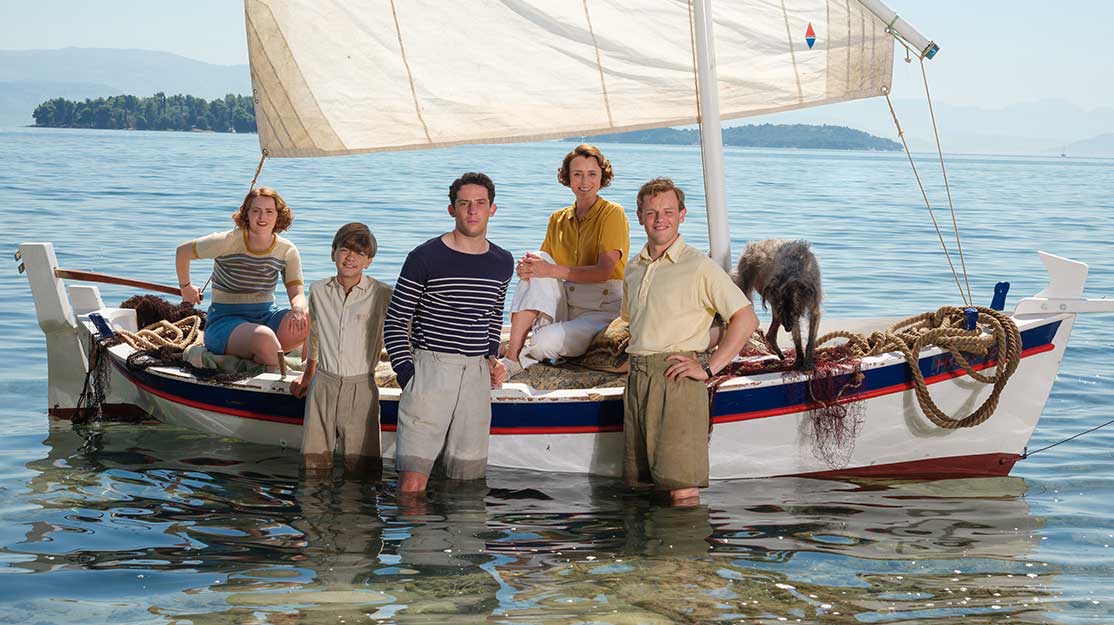 British period drama The Durrells returns for its third season with more fun in store for the eponymous family. DQ caught up with star Keeley Hawes and the production team on the set at the world-famous Ealing Studios.

In the green room at Ealing Studios, we are surrounded by the most unusual props: vintage bird cages, ancient posters of beetles and butterflies, old hamster cages, lots of pressed flowers, distressed wooden shutters, an antique garden bench covered in ‘lived-in’ throws and cushions, and a period microscope.

You do not have to be Sherlock Holmes’ long-lost Hellenic cousin to work out that we are on the set of The Durrells, ITV’s enormously popular adaptation of Gerald Durrell’s bestselling memoir, My Family and Other Animals.

In the third season, which begins on March 18, Louisa has resolved to renounce her quest for romance and instead concentrate on her family. But with Larry battling to complete his third novel, Margo desperate to find a new vocation, Leslie careering between three different girlfriends and Gerry continuing to expand his menagerie, Louisa has an awful lot on her plate.

Ealing Studios is a place redolent of filmmaking history. It has been home not only to such recent productions as Downton Abbey and Beauty & the Beast, but also such timeless Ealing Comedies as The Lavender Hill Mob, The Ladykillers and The Man in the White Suit.

But just why has Britain gone daft for The Durrells? Hawes, who has also starred in such acclaimed dramas as The Missing, Line of Duty and Spooks, believes the series has struck a chord because it appeals to a very wide audience: “I had an email from a woman recently. She told me that she sits down every Sunday night to watch The Durrells with her grandson, who is nine, her daughter, who is in her 40s, her mother, who is 94, and her husband, who she couldn’t get to watch anything else.”

The actress adds: “From the age of nine to 94, all these generations sit down together for this show. It’s something the whole family can watch together. That’s very rare these days because it’s very difficult to make it work. I can’t think of anything else that does that. This has captured everyone’s imagination.”

That impression is reinforced by the sense that Nye’s scripts have a dual effect. Hawes continues: “What Simon does so well is that fabulous Pixar thing of making jokes that work on two levels. He writes jokes which will go over children’s heads, but which make us adults laugh at the same time. So when children are invited in to these cheeky jokes, they feel very excited about it. It’s the same reason why we can all watch The Simpsons together.”

The Durrells, which is made for ITV by Sid Gentle Films as a coproduction with PBS strand Masterpiece and distributed by BBC Worldwide, also taps into a deep communal yearning for a mythical, more gentle and less threatening past. This instinct is perhaps fuelled by a desire to lose ourselves in a realm far removed from the horrors of the real world.

The scheduling also helps a great deal. As Britain is battered by storms and snow, what could be more relaxing than luxuriating in the flawless blue skies of Corfu? It is classic escapist Sunday evening drama.

Hawes affirms that theory: “The Durrells is one of those feel-good nostalgia shows that people want to watch on Sunday night before getting ready for the week ahead.”

But it is not just in this country that The Durrells has had an impact. It has also caused a stir in Corfu. Producer Christopher Hall observes: “The series has had a huge effect. British tourism [in Corfu] has gone up 15% since we first went out. There is a big spike every year just after transmission. On the easyJet flight from Gatwick to Corfu, pretty much everyone has watched The Durrells.”

It has not all been positive for the production, however. Hall notes: “Some tourist operators have been selling tickets to The Durrells Experience and promise a visit to the house where it’s filmed. One day, coach-loads of people turned up to look at our location. We had to tell them, ‘Sorry, this is a private house. You can’t come and look at our set!’

“Two years ago, we had signs up everywhere in Corfu saying, ‘The Durrells’, but we had to take them down because people kept stealing them and putting them on their own house!”

For the producers, there is one other problematic by-product of the show’s popularity. Hall, who also produced Critical, Dracula and Trial & Retribution, says: “The local hotels in Corfu are also doing very well – much to our cost. We say to the hotels, ‘We do a lot of work on the island – can you give us a discount?’ And they reply, ‘No, we can’t give you a discount because we’re full!’”

In addition, The Durrells bears out that old filmmaking maxim: never work with animals. The creatures that make up Gerry’s substantial and ever-increasing menagerie are generally very well behaved, but inevitably there are still rogue elements.

Liz Thornton, who works as the animal coordinator on the production, reveals that the most difficult animals she has had to deal with on The Durrells are – quite surprisingly – pelicans. “Out of all the animals, you really don’t know what they’re going to do.

“They’re characters. They will suddenly take a dislike to someone, and that’s it – they’re off. All the animal handlers are standing just off camera. They try to persuade pelicans to do things with fish, but it doesn’t always work!”

The show has also thrown up some intriguing tests for production designer Stevie Herbert. She says her most demanding task is sometimes working out precisely what things are. “The agricultural equipment on Corfu is fascinating,” she says. “There is a guy in the village whose house is like an agricultural museum. You look at an implement and think, ‘What is that?’ They’re uniquely Corfu.

“A lot of it is to do with collecting olives. There are many strange tools you wouldn’t even think of. There are specific baskets that taper down according to the size of the donkey carrying it. Greece was built by donkeys.”

For all the challenges, the cast and crew have clearly relished working on the Greek island. Herbert speaks for everyone on The Durrells when she declares: “Corfu is so beautiful. The sun and the sea and the scenery are all amazing.

“Scrape back the modern world and the old Corfu is still there, just beneath the surface. Terrapins leap in the river, bask in the sun and cross the road at their own pace – they even have road signs warning drivers about that.”

She concludes: “On Corfu, we have a breakfast club where we eat sandwiches, watch the sunrise and think, ‘Yup, another day in paradise.’”

It’s a feeling no doubt shared by the millions of viewers who tune in to The Durrells every week.