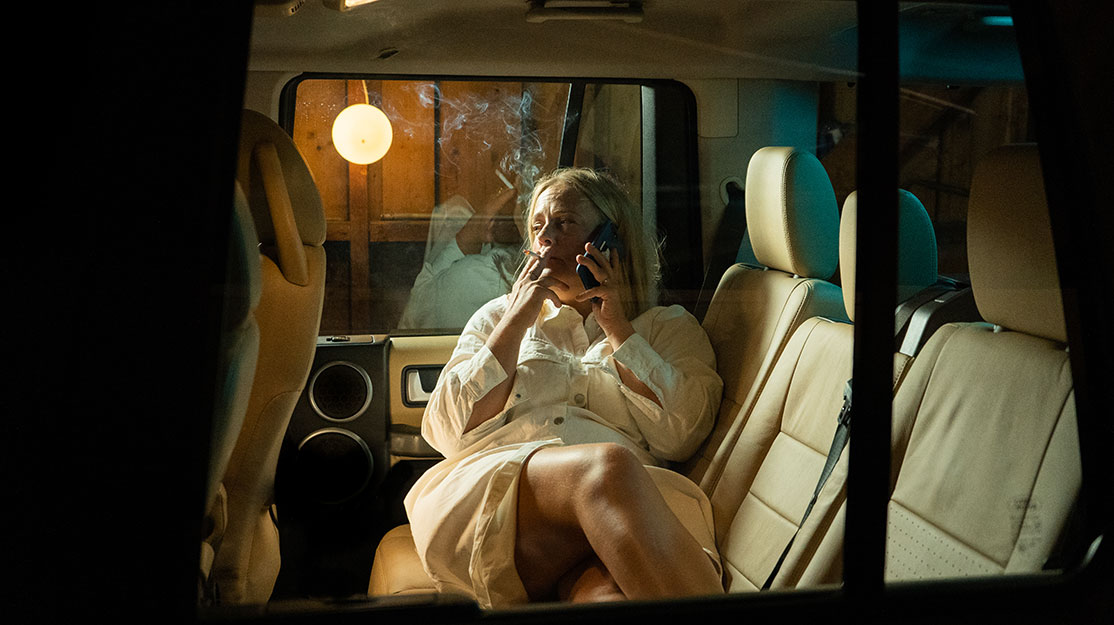 Henriette Steenstrup, the creator, writer and star of Norwegian dramedy Pørni (Suck It Up), and producer Ida Håndlykken Kvernstrøm explain how they found drama and humour in the everyday life of a social worker and her family.

With three teenagers and an ageing father to look after at home, not to mention the dozens of children she supports in her role working for child services, it’s little wonder the title character of Norwegian comedy-drama Pørni (short for Pernille) has trouble finding any time for herself. But that’s the premise of this six-part series, in which the character must face family revelations and overcome romantic frustration time and again.

“There is hope for her,” producer Ida Håndlykken Kvernstrøm tells DQ, “but we’re making a second season, so everything can’t work out for her yet. It’s not a happy ending, unfortunately, but she finds herself in her family and that’s a good thing.”

In an example of the show’s characteristic humour, the series begins as Pørni is comforting her father at the hospital after receiving news he is dying – only for the medics to reveal they mixed up his test with someone else’s. Her continued attempts to enjoy a rare date night also misfire when her children get in the way.

More sombre is the fact that Pørni is also leaving mobile phone messages for her sister, whom viewers soon discover has died, an event that led Pørni to bring her nephew into her already overcrowded home.

“She’s an altruist by heart. That’s probably difficult to change,” says Henriette Steenstrup, the show’s creator, writer and star. “Maybe she has to learn that you have to let go sometimes and just let people grow up and take care of themselves. That’s recognisable for every parent. You want the best for your kids and then you sometimes stretch yourself to do things you maybe shouldn’t.”

“It’s always about what’s best for the child’s interests for Pørni,” says Kvernstrøm. “She does that in her work, but also in her family life. She sacrifices things for herself in order to make her kids happy.”

Known in Norway as a comedian and actor, Steenstrup recently starred in shows such as comedy-drama Meglerne and Netflix fantasy series Ragnarok before playing the lead character in Pørni, the first series she has written herself. The starting point was her ambition to write about a profession she says is looked down upon in Norway, describing working in child services as akin to being a parking warden.

“I wanted to show the other side [of that job], which you never see,” she says. “They actually help a lot of people but you never hear about that. It wasn’t my intention, but it’s also a mirror to a lot of professions now during the pandemic, one that is low paid and employs a lot of women, and suddenly it’s seen as important.”

Steenstrup also wanted to explore the idea of being a parent in a chaotic family setting, as she herself is a member of a large extended family.

“In child services, they say if a parent has a 30% capacity to be a parent, that’s enough,” she explains. “That’s comforting because I don’t feel I have more than 50% sometimes. I have a family, I have an ex – I have a ‘modern family’ and I miss seeing families on TV that I can relate to. In a lot of US series, the teenagers are either very smart with a grown-up personality or are very nerdy. I wanted to make the kids whole characters, because they are unbelievably selfish and outrageously up their own ass but, at the same time, they are sweet and caring and fantastic.”

In Pørni, which has the English title Suck It Up, the family at the heart of the series is dealing with loss, which gives the show a tragic backdrop and reflects Steenstrup’s wish to dramatise all aspects of reality, particularly the humour in everyday life.

“In my own life, I find humour in a lot of places. And even though things are really tough, it’s very inspirational to live with kids. The things they believe in and do are a great inspiration for me,” she says, noting that several real-life experiences have made their way into the finished series.

“I have this neighbour who does ultramarathons and triathlons. I asked how he felt being away from his family twice a day to train, and how was it when he crossed the finish line. He said it was euphoric for two minutes and then he started to think about how to do it better next year – so he had two years in training and he almost got divorced for two minutes of euphoria. Then I gave this training regime to a guy Pørni dates.”

Particularly touching are the moments where Pørni is shown doing her day job, dealing with young children who are often in terrible circumstances. In one episode, she visits a young girl who refuses to allow anyone to take care of her because she believes she has to be a mother to her brother, owing to the numerous adults who have failed them in the past. Steenstrup leaned on real stories and extensive research for these elements of the series, but admits she didn’t want the show to become too dark.

“It is a dramedy so you have to pick stories where there is some hope and which aren’t too dark, because it’s not that kind of series,” she says. “You have to have some belief it will work out with the people and the kids you meet.”

Although Pørni is the first series she has written herself, Steenstrup does have some experience writing for television as a former cast member of sketch comedy series Torsdag kveld fra Nydalen (Thursday Night from Nydalen), which can be described as a Norwegian version of Saturday Night Live. She also came up with the idea behind En god nummer to, in which she starred as a middling actor who lands a role with the National Theatre.

“It was a step up for me to write,” she admits. “Pørni was a collaboration with [executive producer] Bård Fjulsrud, who I’ve been working with for many years and who had faith in me that I should write my own series.

“I enjoy it a lot and it’s totally different from acting, but also my acting experience has helped me to do it. I’ve read so many scripts and I’ve been critical of so many scripts. I know how actors think, and the first time I thought, ‘Maybe this will be OK’ was when we had the first readthrough with all the actors. It’s a brilliant cast, with brilliant actors in tiny parts. When we had that first reading, I was so happy because the actors loved their lines.”

Commissioned by Nordic streamer Viaplay and distributed by Keshet International, the series is produced by Oslo-based Monster Scripted, where producer Kvernstrøm has worked for almost 18 years. She set to work on Pørni after the series was first developed by Steenstrup and Monster Scripted’s creative director Fjulsrud.

“For us, producing it and doing all the prep has been really great because the show has a positive vibe and it’s really funny to go to work,” Kvernstrøm says, noting the production has also been boosted by conceptual director Gunnar Vikene (Grenseland), who helms the first three episodes.

“He is a really famous director in Norway. When he read the script, he just said, ‘I want to be a part of this,’ and that made it easier in a way because then we had that quality approval.

Then the Covid-19 pandemic landed on the production “like a slap in the face,” and filming, which had been due to start at the end of April last year, was delayed by four weeks.

“We managed to reorganise and take a breath,” says Kvernstrøm. “We were one of the first in Norway to produce during the pandemic. Many stopped and waited until the summer but we wanted to do it. With all the safety measures, we managed to deliver on time. It was easy because we have so many talented people on board.”

Steenstrup says the key to the series was ensuring the humour in it was true to life, with those moments emerging from misunderstandings or eccentric character traits. “I’ve done a lot of humour and I like it best if there’s some truth in it,” she says. “It does play out as a drama, but humour comes into the scenes. I’m a comedian, so I have it in me to play for the humour and look for humour.”

With so many children on set, however, Kvernstrøm says it was challenging to get the performances the show needed from its young cast members. “We had a packed schedule where we had to shoot five minutes a day, which is quite a lot in Norway,” she says. “This is not a high-budget series but it looks good and we managed to make a lot of it. The days were so packed, and when you have kids on set and they need to cry, [that creates] stressful moments for the directors. But they managed to get them to play really well.”

Some additional scriptwriters were brought in at the start to lighten Steenstrup’s workload, but the producers found that this diluted the actor’s writing style. As such, she is now also the sole writer on season two, which will begin filming next month before the first season launches in the Nordics on May 2.

Pørni had its world premiere during this month’s Berlin International Film Festival, where it was selected as part of the virtual Berlinale Market Screenings programme. Steenstrup believes viewers will find the show is a hopeful one about the everyday struggles of a family, filled with warmth and humour and where drama comes from seemingly unremarkable, everyday events.

“It’s just there in the everyday life that goes on,” she says. “That was a lesson for me. Drama consists mostly of everyday life and that echoes within me because I feel my life, from when I wake up until I go to bed, is full of drama, but it doesn’t look like that from the outside.”