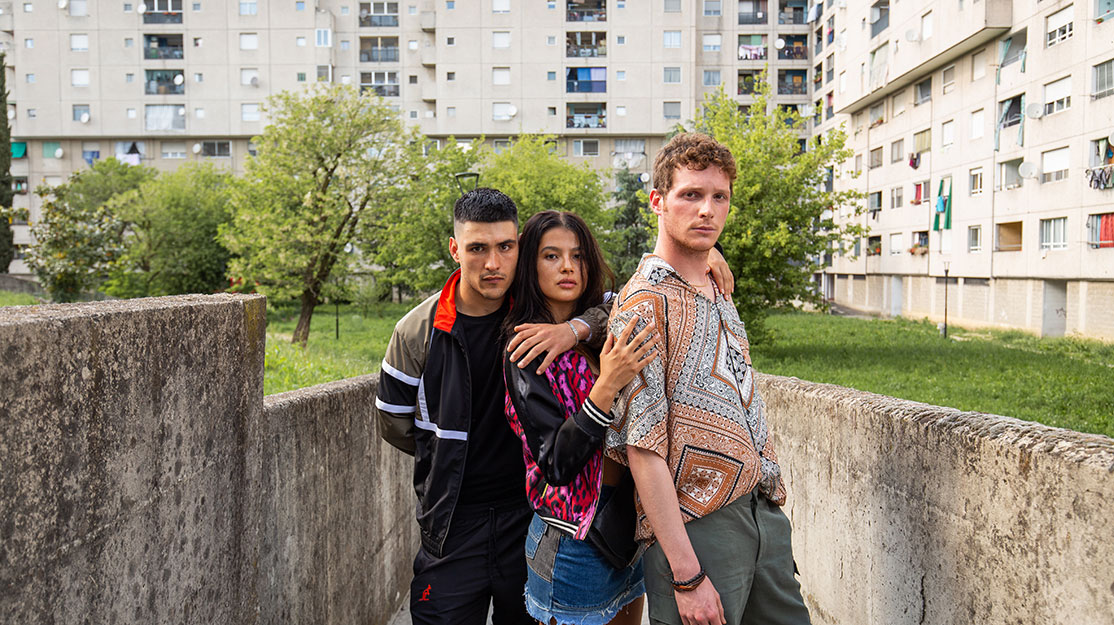 In Blocco 181, war is raging between Italian and Latin American gangs on a Milan housing estate as an unlikely romance blossoms. The cast and directing team tell DQ about making this hyper-real fairy tale that aims to prove love will find a way.

On the outskirts of Milan, a gang war for control of a hive of illegal flats is on the verge of erupting. On one side are the local Italians, who exchange suspicion and threatening looks with the ‘pandilleros’ of Miso, a Latin American clan, on the other.

But at the centre of this bubbling stand-off emerges an intimate and passionate love affair involving Bea, a sensual and fearless pandillera, Ludo, a middle-class party boy, and Mahdi, a protective and sensitive guy from the block.

Exploring love and crime, eight-part series Blocco 181 follows this trio as they build a new family – one that takes them up through the criminal hierarchy together against the backdrop of a battle between the Latinos and the kids from the block.

Pitched as a dark fairy tale set in a hyper-real, ultra-colourful and multicultural Milan, the Sky series is the first Italian in-house production from Sky Studios, with Tapeless Film and Red Joint Film.

Laura Osma (El Chapo) stars as Bea, a strong-willed and independent woman who wants to break down barriers in her community to build a better life for herself.

“Bea asks herself a lot of questions; she’s ready to do everything to improve her life,” Osma tells DQ. “Then when she meets Ludo and Mahdi, it’s the first time she feels welcome and not judged by men. That is especially striking because, in her culture and family, men tell her what she can and can’t do.”

Bea has a lot in common with Mahdi, who has similarly lacked support from his family, says Andrea Dodero, who plays him. “He [has only ever known] expectations and responsibilities, and then he meets these beautiful souls, Bea and Ludo,” Dodero notes. “They take him on a trip of light-heartedness and it’s so natural and effortless.”

As for Ludo, actor Alessandro Piavani says of his character: “The most interesting thing about Ludo is that, behind this façade of being the party boy who loves having fun and taking drugs and all of that, he hides the fact that actually he’s very lonely and he’s not able to find his place in this world.

“It’s only through meeting Bea and living this love story that sparks among the three of them that he can find his place in this world. He finally finds the family he’s always been looking for. As an actor, that was quite interesting to toy with, not just to linger or indulge in this façade and to find more depth within the character.”

As the three characters come together and find the emotional support they had each been seeking, Osma says it’s proof that no matter what kind of situation you are in, you can still fall in love, even in the most unlikely or unthinkable moments.

Piavani adds: “This love story is so powerful that despite everything that happens – all the drugs and this war that’s raging between the Latin American community and the Italians – these guys can find a way to live their love, and that’s the most beautiful thing about it.”

Also among the cast is Italian rap star Salmo, who makes his acting debut as Snake, the right-hand man to Lorenzo (Alessandro Tedeschi), a drug dealer and childhood friend of Rizzo (Alessio Praticò), the neighbourhood boss.

Snake, he explains, is initially hidden in the background until episode five sees him split from his boss and come to the forefront of the story. “I really liked him because he’s very different from who I am. Sometimes I’d like to be like him and some other times not so much,” Salmo says of his character. “He’s a lover, he has a dog and he has obsessive-compulsive order, especially when it comes to tidiness. When he tidies things up, it’s like tidying his problems, fixing them for himself and others.”

But Salmo’s role in Blocco 181 isn’t confined to acting: he’s also the music supervisor and creative producer on the series. He says he joined the show first as an actor, but it was a natural step for him to unite his two interests, film and music.

Developing his character, Salmo found researching and building Snake as enjoyable as being on set. “I did not have any input on the character [from the production team], so he was blank for me. It was an open book I could write, so I put some details in like the obsessive-compulsive disorder and then I created a biography of the character,” he explains.

“I found out that he came from a family of entrepreneurs and this is what led to his perfectionism and method of working. The research of the character is the most interesting part because it’s like playing a video game. You can create your avatar, you can create hair and other details.”

When it came to the music for Blocco 181, Salmo drew inspiration from the soundtracks to films such as Duel and Mad Max after rejecting the idea of injecting his own songs into the series.

“I didn’t want people to think this was just another series with a rapper,” he says. “Instead, we decided to mix Latin American and electronic music. I had already done some experiments and wanted to find the right notes, because music isn’t just about playing; it’s about playing the right notes at the right time.”

The additional use of rap and reggaeton in the series complements its themes of love, family, sex and crime, as well as the Italian and Latino cultures reflected on screen.

The directors – Giuseppe Capotondi (Suburra – La serie), Ciro Visco (Gomorrah) and Matteo Bonifazio – also sought a bold and sexy visual style for the show, in attempt to make it look different from other dark crime dramas.

“I wanted it to be fun because it’s a fairy tale – a dark fairy tale but it’s still a fairy tale,” says lead director Capotondi. “It’s not realistic, it’s hyper-real, and I wanted it to follow this idea. We decided to shoot it in anamorphic and with bright, bold colours, with very little handheld camera. It looks a bit more like a graphic novel, rather than being realistic or shot like a documentary.”

Visco was “totally fascinated” by the chance to create a hyper-realistic story, having previously worked on projects rooted in reality. “When I first talked with Giuseppe and he explained to me the few rules we had but also the philosophy, it was incredible,” he says. “He said, ‘You have to take the scene and listen to it. If it would like to go in this direction, go. Don’t think about it, don’t think about the rules. Think about what we would like to say.’ For me, that was really inspirational.”

Bonifazio picks up: “The rules were originally visual intentions and visual guidelines in terms of what colour palette to use or the kind of atmosphere, so we worked closely with the directors of photography to work out the overall look so it would have an immediate impact and draw you in. Giuseppe said these guidelines were adaptable to whatever we thought each image and setup would have. Luckily all the actors worked out really well and magically everything came together pretty well.”

Bonifazio was also part of the writing team led by Francesca De Lisi, Dario Bonamin, Andrea Nobile, along with Giuseppe Capotondi, Matteo Bonifazio, Paolo Vari and Stefano Voltaggio. The series is based on a concept by Vari, De Lisi, Bonamin, Mirko Cetrangolo and Marco Borromei.

“For me it was a little bit of a treat,” he says of being in the writers room. “Following the guidelines of the showrunners, I was still able to sneak in some stuff I wanted to do. There was still someone on top of me there who decided the structure of things, but it was fine because I could adapt little things to something I maybe had in mind. I was spoiled a lot. I don’t know how many times that will happen.”

Filming took place in Milan, though the central neighbourhood is made up of lots of different locations around the city, adding to the fairy-tale nature of the show’s style. On set, Colombian actor Osma would forbid anyone speaking to her in Spanish or English so that she could learn Italian for the show. “I had to learn my lines by heart. It was very hard for me,” she says. “I had to think a lot, but that was the most interesting thing, apart from moving to another country and a different culture.”

The multicultural world created in front of and behind the camera is what stands out for Piavani and is why he believes Blocco 181 is a different kind of Italian crime drama. The show launches on Sky on June 21 in the UK, Ireland, Italy, Germany, Austria and Switzerland.

“The most interesting thing was that it’s a story about different worlds clashing and meeting,” says Piavani. “That was reflected on set, off camera, as well because we had an international crew. It was beautiful to meet all these artists and actors and all these people working on set who were coming from different places all over the world. That’s quite a privilege as an actor.”