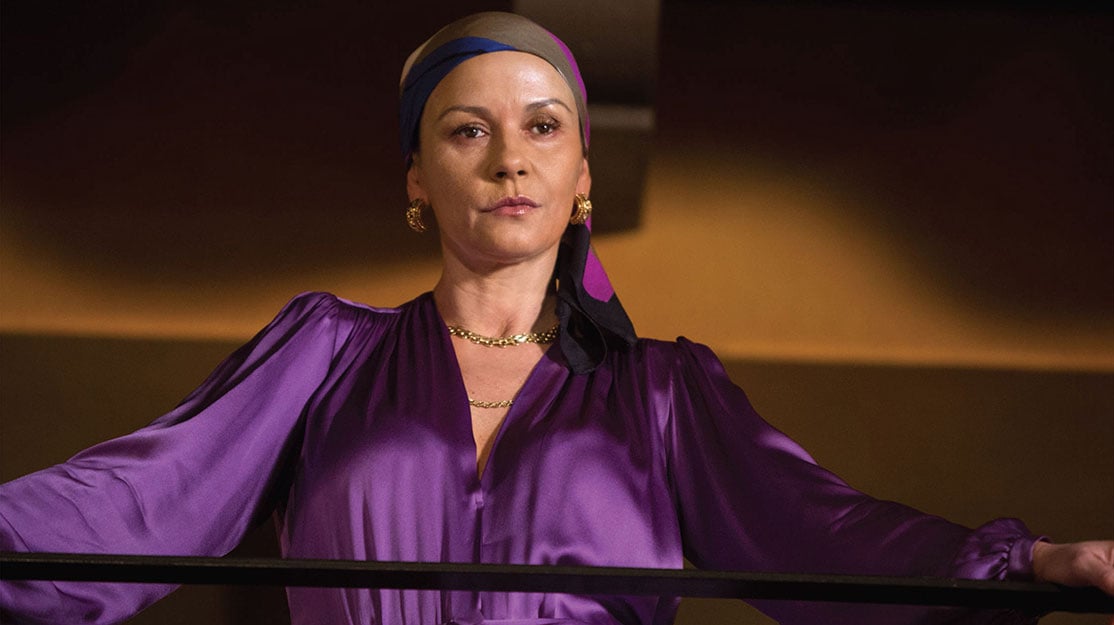 Catherine Zeta-Jones was the star attraction in Cannes when she attended Mipcom to promote her forthcoming Lifetime movie Cocaine Godmother. DQ was on hand to hear how she helped develop the series, how she transformed herself for the role and why she has now returned to the medium where her screen career began.

She won an Oscar for her dazzling turn in big-screen musical Chicago and has starred alongside Tom Hanks and George Clooney in films such as The Terminal, Ocean’s Twelve, The Mask of Zorro and Brit comedy Dad’s Army.

Now Catherine Zeta-Jones’s career has come full circle. After beginning in theatre, her big break came with British TV drama Darling Buds of May before she moved to films. But now she’s back on the small screen, first with FX drama Feud, which aired earlier this year, and now as the lead in Lifetime movie Cocaine Godmother.

Zeta-Jones plays real-life drug lord Griselda Blanco, a pioneer in the Miami-based cocaine trade who built a drug distribution network spanning the US and was suspected of ordering more than 200 murders.

Zeta-Jones last week added some star power to Mipcom in Cannes, where she spoke about the project alongside Patrick Vien, executive MD of international at A+E Networks, and Tanya Lopez, senior VP of original movies and miniseries at A+E-owned Lifetime.

Griselda Blanco was a vicious, brutal character – and that’s why Zeta-Jones wanted to play her on screen…
Catherine Zeta-Jones: What drew me to this role was a desire to get inside the skin of such a woman with all those qualities. Usually in drama school they say you have to find some thread of yourself that you can put into a character. Well, this is not that at all and that’s what made it so interesting. A woman came from nowhere, literally the slums of Medellín, Colombia, and became the most revered, powerful, feared woman in the drug business, dominated by ruthless men. How did that happen? Who was this woman? So to be able to get deep into that character, get under her skin, is something I personally had’t had the chance to do in a long time.
For me, this movie [reignited] my love of acting. This is what it’s about. It’s all very good to be playing ingenues; it’s all very good and flattering to have your character’s name preceded by ‘the beautiful, sexy woman walks in, her name is …’ – but I always go, ‘Aw, shit’ because I know that’s way too much time in hair and make-up. With Griselda, I was able to let all that go and find the woman, find out who this woman was. [I had to] humanise her in a way that was unfathomable but certainly not to homogenise her or find some sympathetic quality to her, because I don’t think she had one. That’s why I thank A+E and Lifetime, because it would be very easy to homogenise and rose-tint this character and story, and I was adamant about that. I said, “Please, Tanya, let me loose,” and she said, “Go girl.” [Griselda] was everything I thought she would be for me as an actor – deep, dark, emotional, dangerous. [She is] unsympathetic in a way but, for some weird reason, I think our audience will connect with her or at least understand her.

Cocaine Godmother embodies what a Lifetime movie should be…
Tanya Lopez: The message I want everyone to hear is we’re telling stories about strong, smart and, in some ways – and I really feel this about Griselda – badass women, with high production values and exceptional talent. That’s where, as far as we’re concerned at Lifetime, the movies are evolving to and we’re reaching for. On this particular movie, part of it was shot in Colombia, in Medellín, and the idea of us spreading out and shooting these movies in other parts of the world is very important.

TV movies can bring an audience to stories that may be lost as low-budget features, and give actors the chance to bring stories they’re passionate about…
Patrick Vien: We’re living in such an extraordinary period of television where the gates have been blown wide open for a group of artists who, if you go back 15 some years, might have been more about the motion picture business. If you’ve ever worked in a company that has a motion picture division and a television division, there is that absolute rivalry between the two. What’s brilliant about television is it started at a moment in time when Kevin Costner joined our company with Hatfield & McCoys and we saw many other projects – True Detective is another example – where suddenly [film talent] was coming into the marketplace.
The golden age of television is made that much more golden by talents such as Catherine who come to us to realise projects that we can bring to vast audiences through the medium of television. This film simply puts us in the league we want to be in. Everybody uses this phrase ‘premium content.’ Having Catherine at our side and this project in our stable means we are solidifying A+E Networks’ position on a global scale as a premium content provider.

For all her bad traits, Zeta-Jones found something strangely likeable about Griselda Blanco…
Zeta-Jones: There are so many qualities about her that are normally just bad, just not right but, as a woman, there’s something sadistically fantastic and admirable about where she came from and how she was literally the boss in a very dangerous man’s world. You’ve got to give it to her. I know in some of our early conversations, it was like, ‘How do we humanise Griselda? How do we make people relate to Griselda?’ I remember saying, ‘Don’t worry, as bad as she is, I’m going to make people kinda like her.’ Whatever she did, the violence and the murders she’s associated with and eventually charged with, and eventually assented for, I kind of like her. It’s a very sick, dark sense of humour I’ve been hiding all my life and now it’s come out in Griselda.

The stigma of actors moving between television, film and theatre that once existed has now been broken…
Zeta-Jones: I was stuck in the theatre actor box – it wasn’t just that, it was a showgirl theatre, it wasn’t even Royal Shakespeare. So I was part of that world trying to get out of that box, that pigeonhole. I eventually made it into television, made it into film and then if you got to film, you don’t go [back] to TV. That’s changed. Actors are able to do human stories [in television]; they don’t have to be robots in a $200m movie. As an actor, that’s why we do it – to have those international human stories that any culture can understand because they’re human. It’s human nature. It’s qualities that you have or, like Griselda, you don’t have but the fundamental bottom line is they’re human stories – and on TV we’re able to have the time to be able to take those stories out.

The star underwent a huge physical transformation to play Griselda Blanco and relished immersing herself in the character…
Zeta-Jones: Griselda had a very specific face. It was a very interesting face. I didn’t want to do a caricature so that people who never even knew who Griselda Blanco was would see a picture of her and say, ‘She’s not very good, she looks nothing like her.’ I didn’t want to do that. I wanted to get under the skin of this woman. But I wanted to have a transformation – I gained weight, I put my back out the week after I finished shooting. I’m an ex-dancer so I always have a straight back, but my pelvis was forward, I was hunched, I was a bit like a man – if I had balls, I’d grab them from time to time. So that whole transformation was something I lived through every day.
I love my husband and my kids but I was so glad to be on my own on location, to immerse myself in this woman. So I pretty much was walking around feeling like Griselda for the whole length of the shoot, and then I put my back out. But I don’t care – it was worth it. I wanted to let it all hang out. Griselda didn’t care; she thought she was beautiful. She was a movie star, starring in her own movie, and she didn’t give a shit what other people thought. I wanted to have that attitude, that mentality, not to do a caricature of the mugshot people only ever see of her. She was glamorous, she was a bit of a recluse, she was a shopaholic, she was an addict. Everything in excess. She had rooms of clothes, bags, shoes and she never went out – only to kill people. It was a fascinating character to immerse myself in, very liberating. I didn’t care that my eyes were puffy, I was really hoping I was having a puffy day on the shoot.

Her career has now gone full circle – “a wonderful circle” – as she returns to the medium that made her name…
Zeta-Jones: I’d only done theatre before and then I was cast in [ITV drama] The Darling Buds of May. We did six hours for two years with our legend of a television actor, Sir David Jason. That was the first thing I did on screen. I was a complete unknown and, within an hour of television, my life changed completely. Then I was in France doing films with Philippe de Broca and Édouard Molinaro. Then I went to the States and auditioned for a whole bunch of stuff, but nothing was really coming to fruition. But I was cast in the TV version of Titanic. All I wanted was to be Kate Winslet opposite Leo [Leonardo DiCaprio] – I wasn’t, but I took the TV version of Titanic. Cut to Steven Spielberg watching it on Sunday night and he casts me in The Legend of Zorro.
Next time I come back onto TV, it’s the biggest stroke of luck because I got to work with the best people I’ve ever worked with in my career, and it’s Griselda, it’s Cocaine Godmother. I feel very happy, lucky and blessed to be back in a medium which I felt very comfortable in, at home in, and what was really the start of my career. Even though I did theatre since I was nine years old in Britain and played leads in West End shows, I was completely anonymous, so it was The Darling Buds of May that opened up my world to TV and film. I’m very happy to be in a medium I feel very comfortable in.