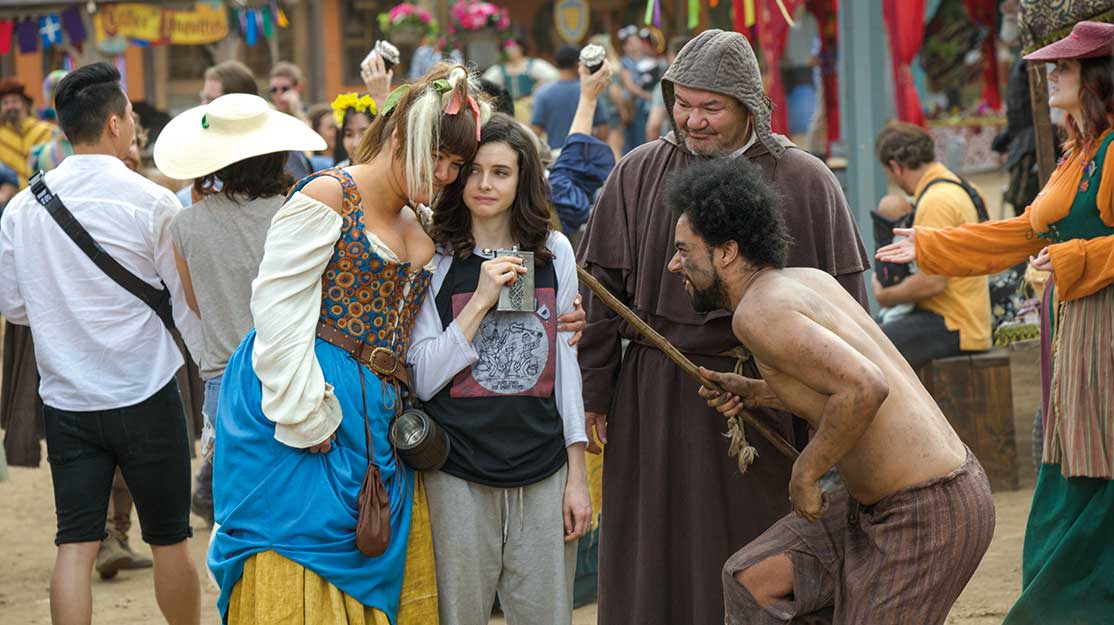 American Princess showrunner Jamie Denbo tells DQ how her own life inspired the Lifetime drama, which follows a woman who finds support among an eclectic cast of characters at a Renaissance fair after running away from her wedding.

There is an episode of The Simpsons, season six effort Lisa’s Wedding, that flashes forward to tell the story of the family’s eldest daughter finding love with a wealthy English aristocrat.

The episode went on to win an Emmy for Outstanding Animated Program in 1995. Yet what makes the story so memorable is not its tale of love but how Lisa comes to hear of it, stumbling upon the resident fortune teller at a Renaissance fair.

Other attractions at the historical event include Friar Wiggum’s Fantastical Beastarium, where the creatures on show include an Esquilax, “a horse with the head of a rabbit and the body of… a rabbit,” while Homer and Lunchlady Doris – “Sweet maiden of the spit” – engage in a conversation using only old English.

“Every show that’s been running for a long time has their Renaissance festival episode,” says actor, writer and producer Jamie Denbo. “They all have one that takes place there, but this show aims to get inside the world a little bit more. The Renaissance fair is a very American phenomenon – it’s part hippy commune, part circus, part historical re-enactment – and it always has been.”

The show in question is American Princess, a 10-part series commissioned by Lifetime that has been inspired by showrunner Denbo’s own experiences. The story centres on Amanda (Georgia Flood), an Upper East Side socialite who flees her own dream wedding.

When she stumbles upon a Renaissance fair, she experiences an unexpected awakening, leading her to leave behind everything she thought she cared about. Amanda quickly develops new friendships and rivalries, and begins a romance that opens her eyes to new beginnings.

The story is partly based on Denbo’s life – “not the wedding part, that’s all Amanda,” she points out. Before she established herself in film and television 20 years ago, Denbo graduated college and decided to join a summer theatre company that turned out to be a Renaissance fair.

“When I got there, I realised this is an entire world full of adults who live in this nomadic way and have these unusual skills and a very communal way of living, and I was both completely repelled and attracted at the same time,” says Denbo, who grew up near Boston. “I didn’t understand this was a life option for people – I thought either you’re someone who has a job in the world or you are dysfunctional in society.

“So when I saw people living a life full of freedom and weirdness and colour and playing, I realised there’s another way to live. I ended up staying for a while, much to the confusion of my family and friends. I lived there for a long time and I still communicate with that community. So the show is a love letter to them.”

In American Princess’s debut season, the story follows Amanda’s introduction into this new world as culture shock makes way for personal growth. Despite her family’s best attempts to intervene, Amanda begins to relish living in a world where she can act without fear of being judged by those around her, with an extensive cast of supporting characters who all come with their own backstories.

“What’s really fun about promoting the Renaissance fair is that, as we’re such a tech-centric society now, it’s lovely to be in a place where you don’t feel you have to have your phone all the time and you don’t want to,” Denbo says. “There’s so much human interaction. I wanted to put in every aspect of that.

“Entertainment is not just the stage, it’s all around you and it’s up close. It’s really lovely. I wanted to put a lot of the drinking in, because there’s lots of drinking. I wanted to put in the feeling of freedom you get there, to be what you’d like to be, to play. There’s just a lot of authenticity.”

To bring American Princess to the screen, Denbo partnered with the executive producers of Orange is the New Black, Jenji Kohan, Tara Herrmann and Mark A Burley. She first met Orange showrunner Kohan 10 years ago when Denbo was making a pilot for her alternative comedy act, Rhonna & Beverly. Showtime passed on the pilot, though Sky Atlantic in the UK later commissioned a six-part series that aired in 2012.

Kohan and Denbo struck up a friendship that continued after the original pilot failed to take off, leading to Denbo taking her idea of a Renaissance fair-set series to Kohan. The latter then invited Denbo to join her at a meeting with US cable channel History, where she pitched the idea that would become American Princess. A+E Networks-owned History turned it down, but when the network executive who heard the pitch moved to sister channel Lifetime, it was deemed to be the perfect fit for a network known for scripted series such as UnREAL and Devious Maids. Produced by A+E Studios, the show debuts in the US on June 2, with A+E Networks also handling international distribution.

“The beauty of being a journeyman in this business is yes, I had written and done some pilots, but I had mostly been a career guest star and an improviser,” she says. Denbo has appeared in TV series including Orange is the New Black and Weeds – both created by Kohan – and films such as Melissa McCarthy duo Spy and The Heat.

As a showrunner, she has found the golden rules of comedy improv – give and take, and listen – also apply to one of the most demanding roles in television. “The truth is those were so applicable in this, it made my experience incredibly copacetic, dealing with lots and lots of people who really need to be heard and who need to have their ideas validated and exchanged,” Denbo explains.

“So it was a really incredible process. The other thing that was great for me, coming from the acting world, is if you’ve been on a hundred sets, which I have, you do have an understanding of how the set works and how to talk to actors. Everyone thinks you’re one of them, which is actually a huge advantage.

“I think sometimes it gets a little murky for people who are just career writers because they don’t have a comfort with actors on the set. It would appear there are a lot of productions where there’s a real separation, and I wanted everybody to feel like everybody was part of everything. It was a great experience.”

Denbo says she took a lot of guidance from Kohan, Herrmann and Burley, all of whom helped her run the American Princess writers room. “The other trick of showrunning,” she adds, “is to not get bogged down. You don’t need two hours to make a decision on whether it’s a blue jacket, a green jacket or a red jacket. Maybe that’s the improviser in me, but it’s the joke that matters, not the colour of the jacket. Make a decision quickly and move on.

“To me, having done it, I feel that every showrunner should probably be a woman. Across the spectrum, I have a lot of showrunner friends and acquaintances who I’ve spoken to. For the most part, the men are very beaten down by the process and the women are like, ‘Yes, we make decisions like I do in my house.’ You multi-task. It’s a great job for a woman because there’s a lot of quick decision making and a lot of multi-tasking, and that seems to be – not to be completely gender obnoxious – a really good match for the way women live their lives.”

American Princess was filmed in Simi Valley on the outskirts of LA, where the production team built a Renaissance festival from scratch. “They made the desert bloom. We were in 115-degree heat on some days with actors in velvet Renaissance festival costumes, and they look and sound and feel incredible,” Denbo says. “It was a very joyful, happy, silly set.”

With a cast of characters as eclectic as those introduced in season one, it’s no surprise to hear Denbo reveal she has lots of ideas about how to take the series forward, should it be renewed. Future seasons would always have Amanda at their centre, however, as a grounding point for viewers to relate to this fish-out-of-water scenario.

“We’re lucky we found Georgia because she’s so charming and lovely that you actually believe this is the journey she’s on. It takes a very special actress to not be a complete bitch [in the depiction of Amanda]. She’s a shining star,” Denbo says of leading actor Flood. “She really proved herself as a joy to follow and reflect the world through. You’ll also fall in love with the characters around her. People are going to want to see more of them and get more of their story as we go along. In the first season, we wound up giving romantic stories to characters who you really want to see what happens with them. We hit the jackpot in casting.”

Denbo now sees her future behind the camera, rather than in front of it. She continues to do voice work on Netflix series F is for Family and has a podcast called Beverly in LA, based on the Rhonna & Beverly characters. But, she adds starkly, “no more acting. I don’t want to sit in a make-up chair for two hours. I have developments but I’m preparing to put my heart and soul into this project because I feel the world should be ready for some comedy and some kindness. That’s what we’re trying to bring.”