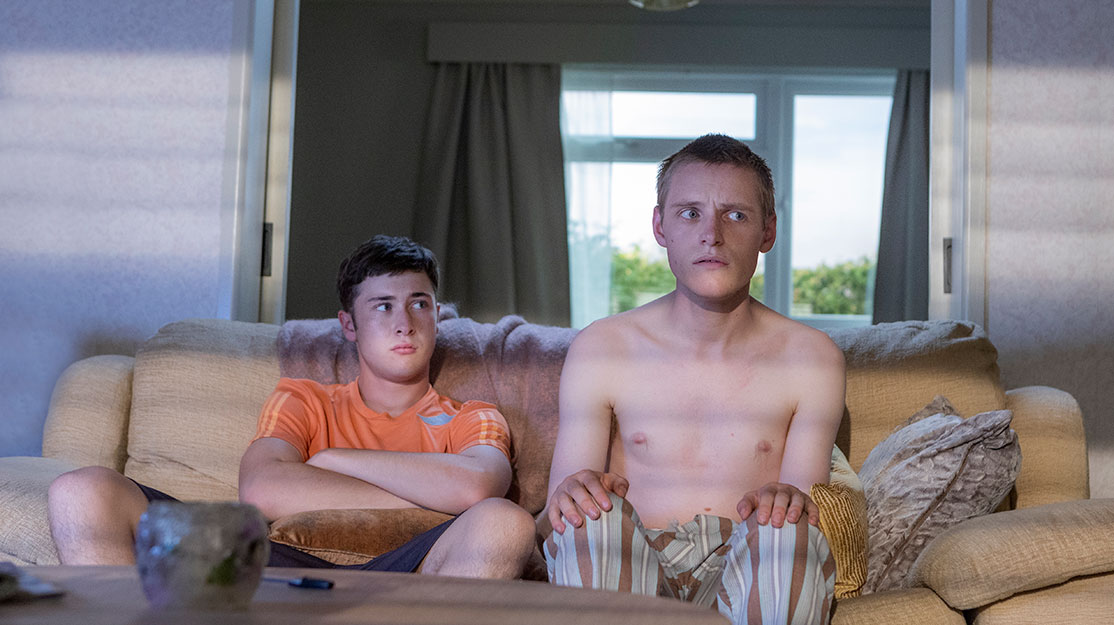 Somewhere Boy (fka The Birth of Daniel F Harris) is not the show you may think it is. Initially, it’s the story of Daniel, who has lived a sheltered, cosseted life with his father in the middle of nowhere, where he has been raised on a diet of classic records and old movies with no sad endings, growing up fearful of the monsters who prowl outside.

But this series isn’t about the plight of a teenager held against his will for 18 years and his fight to escape his captors. Instead, it’s a funny, heart-warming, endearing and sometimes absurd story of the trials and anxieties facing modern teenagers from the perspective of someone who is confronted by new experiences every time he steps out the front door.

When the series begins, Daniel has been living in isolation with his dad Steve ever since his mother died in a car crash when he was just a baby, with his well-meaning father seeking to shelter him from further evil. But when tragedy strikes again, he is sent to live with his aunt Sue and her family, and finds a world he never knew existed.

From Clerkenwell Films (The End of the F***ing World) and distributor BBC Studios, Somewhere Boy is the first original series from writer Pete Jackson, who developed the series over the Covid-19 lockdown. The eight-part drama celebrated its world premiere at French television festival Series Mania last month, where it won the Prix du Public (Audience Award), ahead of its launch on the UK’s Channel 4 later this year.

Jackson found the inspiration for the series in his father’s old record player, which reminded the writer of listening to music as a child and feeling safe, happy and warm.

“Now, listening to the same records on the same record player with my son, I was thinking about those little worlds we create for our children and that were created for us as children, but how they can’t last and how we might try to make them last as long as possible,” he tells DQ. “What if that were taken to an extreme and a man lost in grief, trauma and fearful of the outside world tried to create a little place of peace and happiness for his boy?”

The series is also about “the bad things one might do to protect the good they have created, and when the scales tip and it actually becomes more bad than good, how do you set someone free?” Jackson adds.

Seeing the world through Daniel’s eyes, everything about modern life looks alien and strange. That experience is mirrored by Aaron, Daniel’s cousin, who has grown up in the ‘real world’ but, under the absent gaze of his family, has created his own fantasy world through the internet, pornography and social media.

Through these contrasting teenagers, “you see how one is very well versed in romantic movies and love and the other is well versed in the cold mechanics of sex,” Jackson says. “It’s about what these two boys can bring out in each other, and in the middle between them is a reality they can both go and explore together.”

“One of the things I love about the show is how Danny is under-exposed to the modern world and Aaron’s over-exposed,” says executive producer Petra Fried, joint MD at producer Clerkenwell. “They both need to come to a place of understanding the world better, and they manage to do that in an unlikely way. They help each other to do that.”

Jackson pitched the idea of the series to Fried at their first meeting and secured a script and series bible commission just two days later. Fellow Clerkenwell exec producer Emily Harrison then joined the development team.

“Pete has been amazing. He’s a newer writer but he’s not 25,” Fried says. “I’ve worked with a lot of newer writers; I love working with them and the energy they bring and working really closely together to help them with their first series. Pete has so much life experience to bring but that was really a joy.”

Fried was immediately drawn to how the show’s high concept was grounded in reality. “Pete cannot write a bad line of dialogue if he tries, and he writes it in a way that makes [the story] utterly plausible,” she continues. “We’ve all seen quite a lot of TV shows and movies and heard real stories about people being kept against their will as children. This is a house filled with love, so it feels really different from what we’ve seen.”

Flashbacks reveal glimpses of Daniel’s life with his father, while he also experiences nightmarish visions. In addition, a thriller aspect is thrown into the mix in the form of Daniel’s search for the truth behind his mother’s death.

“What’s fun is Danny dragging his reluctant cousin along on this journey,” Fried says. “He goes on this quest naively and his cousin is very reluctant, but it does take us into a new element of the story.”

Jackson opened a writers room with the execs from Clerkenwell and producer Gavin O’Grady to develop the story and build the show’s ensemble cast of characters. The writer penned the pilot script quite quickly but then spent “hours and hours” storylining the rest of the series, which contains a lot of nuance and subtext as feelings and emotions aren’t often verbalised.

“No one really says what they’re thinking, it’s all under the surface,” Fried says. “There are a lot of stories coming together and coalescing in unobvious ways, which is difficult. It’s a bit of a high-wire act writing the series and thinking, ‘I hope come later episodes everything comes together in the right way,’ because nothing’s ever certain. But it has done, which was a relief.”

“It’s very complicated,” laughs Jackson. “There’s ‘episode seven me’ hating ‘episode one me’ because you set all these horses running in the beginning and suddenly it’s got to come together.”

The whole series was storylined at the outset, but as characters were developed and new ideas came along, the story was constantly changing.

“It’s about storylining, writing, restorylining, writing, restorylining, writing again… The time and the effort Pete and the team put in really shows in the really multi-layered sense of the series,” Fried says. “On the surface, it feels like two boys from different backgrounds going on adventures, but there are many themes. We also had to think about the flashbacks and how you balance those with the nightmarish elements, and we worked with [lead director] Alex Winckler to work out the different ways we wanted to film the nightmares, flashbacks and the present day to really differentiate them on screen so you always know what you’re looking at without having to spell it out on screen.”

The “economical” half-hour format used by Somewhere Boy – which was filmed around Newport and the Brecon Beacons in Wales – meant Jackson focused on what was most important to the story. It also introduces an element of pace to the series, which has a clear visual style, with flashbacks shrouded in darkness and shadows and the present day lighter and more airy.

“When I first saw it, everything looked better than I had imagined,” Jackson says. “Alex had such a clear visual style for this, even using older lenses to shoot the flashbacks because it gives a warmer, grainier feel, and modern lenses make the present starker. To sit and watch it was really thrilling.”

“He and Ed [Moore, the DOP] brought these ideas to the framing that we really love, where often characters are right at the edges of the frames because we’re trying to project an idea of alienation,” Fried explains. “You might not be able to put your finger on it, but sometimes you look at it and it just feels weird. We wanted it to feel weird because the whole world feels weird to Danny, so by looking at it through Danny’s eyes, he’s on the edges and everything he looks at is a little bit askew, a little bit odd. Alex and Ed really achieved that and got fantastic performances from our two young actors.”

Leading the cast are Lewis Gribben (Deadwater Fell) as Daniel and Samuel Bottomley (The Teacher) as Aaron, with Rory Keenan (Striking Out) as Steve and Lisa McGrillis (Mum) as Sue.

On screen, Gribben and Bottomley may as well be in two different shows, such are the stark differences between their characters and performances. But while you would usually want the performances to feel coherent next to each other, this contrast is one of the show’s strengths.

“Lewis brought something to it the minute he walked into the room,” Fried says of Gribben. “We thought it would be hard to find our Danny. In walked Lewis, first audition, and we found him. Lots of young people can relate to the way the world can feel alienating. It’s not uncommon for young people to feel ‘everyone fits in except me.’ That’s what social media has done to the youth of today; they see everybody else glossified and it doesn’t occur to them to think that, in reality, they’re all feeling the same way.”

That Somewhere Boy strikes a chord with viewers was evident in its success at Series Mania, while its humour ties in to the universally relatable, complex nature of modern life and how it is experienced by both Daniel and Aaron.

“The way Danny’s grown up in a polarised world, it’s very comforting to see the world in binary terms – there are monsters out there; here’s good, there’s bad; we’re right, they’re wrong,” Jackson says. “Actually, what if that’s not true and there aren’t any monsters and, in the main, the world is just full of troubled, ordinary people trying their best, failing and winning? That world is more complicated and difficult but also more rewarding and thrilling. The series about those boys taking their first steps into that world and trying to actually live.”