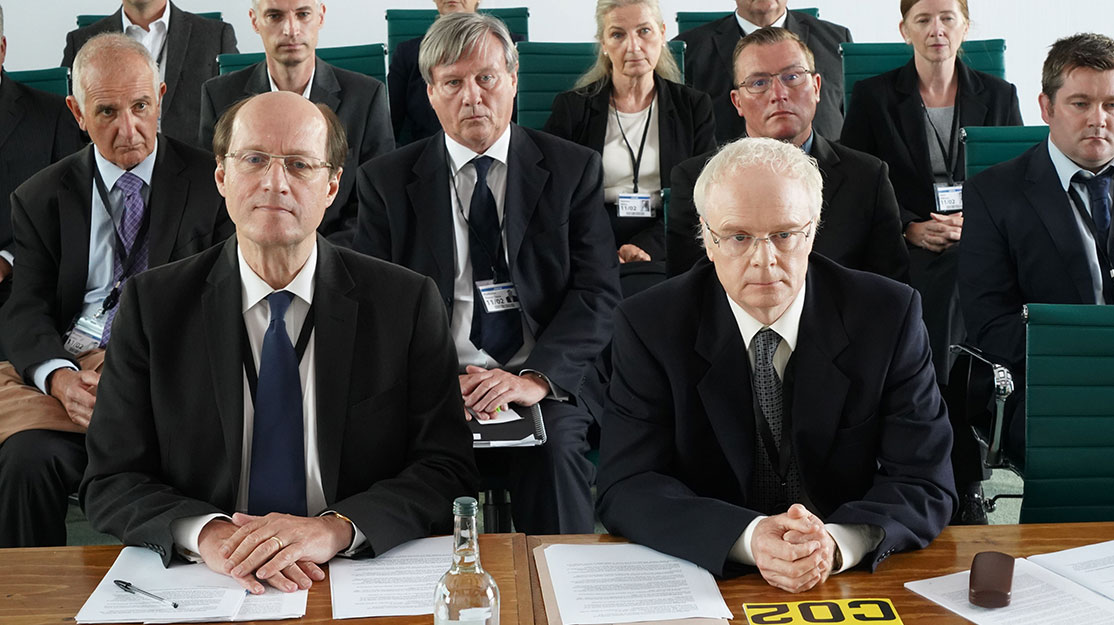 Eye of the storm

Vox Pictures producer Adrian Bate and director Pip Broughton tell DQ how they blended conspiracy thriller and relationship drama in The Trick, a single film that dramatises the fallout from the 2009 Climategate affair.

Poet and screenwriter Owen Sheers and Vox Pictures, the Wales-based production company behind thriller Un Bore Mercher (Keeping Faith), have a history of collaborating on fact-based dramas. Their first film, 2016’s Aberfan: The Green Hollow, commemorated the 1966 disaster in the Welsh mining town, before 2018’s To Provide All People marked the 70th anniversary of the UK’s National Health Service.

Now their third collaboration, BBC single drama The Trick, focuses on the story of world-renowned Professor Philip Jones, the director of climate research at the University of East Anglia (UEA), who in 2009 became a victim of cyberterrorism, putting him at the centre of an international storm.

Days after the IT servers at the Climatic Research Unit at UEA were hacked, hundreds of stolen emails were released online, leading to accusations that the data analysis gathered over decades was scientifically flawed and that it exaggerated the case for global warming. In the wake of the data drop, Philip faced unjustified persecution. But with his supportive wife Ruth by his side, both he and the science were ultimately exonerated.

As with his previous films, Sheers wrote the script based on in-depth interviews with the real-life people featured in the story to ensure there is “a profound authenticity to the storytelling and that the voices and opinions of the people involved are reflected in an intimate and urgent way by the writer,” says Pip Broughton, Vox co-founder and the film’s director. “It’s the third project we’ve done together but the difference is this is for BBC One and we’re aiming at a wide audience for this very important film.”

Broughton and fellow Vox co-founder and producer Adrian Bate found they chimed with the subject matter when Sheers brought them the idea for the drama and, with the 2021 United Nations Climate Change Conference (COP26) being held in Glasgow at the end of this month, the project found a home at the BBC.

“We so love working with Owen and his writing,” Bate says. “[BBC chief content officer] Charlotte Moore very much took it under her wing and wanted something in drama form to contribute to the debate about climate change. This is a story that absolutely does that. Although it was 10 years ago, it seems so relevant now. It was a story we felt was important, but we had to find a way [to tell it].”

Science and drama, Bate admits, are often “uncomfortable bedfellows,” but Sheers found a way into the story by focusing on Philip and his wife Ruth, who come under an intense public scrutiny and pressure. “He found an emotional spine to the story that Pip has picked up and run with and made it very palatable for a BBC One audience,” Sheers continues. “You can watch it for the science or you can watch it for their relationship.”

“The strength of it is it’s an incredibly intimate story with a profound global significance,” Broughton says. “One of the metaphors from the story is tree rings – it’s a bit like this story is told in concentric circles and, at the centre of this film, there is the strain on that marriage and the pressure and strain on that man. As filmmakers, we were intensely aware we were telling other people’s truths. Our gesture has been to honour their truth and their story.”

Sheers’ original script was 40 pages longer than the final shooting draft, the director reveals, while there was also a lot of discussion about how the film would begin. The final cut opens on a red and white candy-striped lighthouse before the camera flies over a nearby beach to find Professor Jones, a happy family man, running and playing by the water.

The lighthouse stands as a symbol for the protagonist, who is “a beacon of truth, a beacon of hope, and the overall gesture of the film is one of hope and optimism,” Broughton says. “One of the quotes is, ‘Our generation may have broken the planet but the next generation can fix it.’ There is this huge time bomb and pressure that ticks through the film, that we are running out of time. We wanted to start with here is a happy guy, who is world-renowned, and then to see how he imploded as a result of the media storm.”

What makes The Trick unusual as a conspiracy thriller is the lack of a smoking gun. More than 10 years later, no one has yet been held responsible for the hack, which means Bate and Broughton started work on the film without knowing what the ending might be.

“The end to our story is the fact Professor Jones was completely exonerated, not only by a parliamentary committee but seven further research projects into his methodology and workings that all found he was absolutely correct in all of his predictions,” says Bate. “We do have an end for him personally, but we don’t have an end to the story in terms of who did it.

“Owen recently explained to us that if you ask most people if they remember ‘Climategate 2009,’ their response is, ‘Oh yeah, it’s when those dodgy scientists falsified the research,’ so there’s still this residue that actually these scientists were dishonest. The hack was incredibly successful because here we are 10 years later trying to put the record straight that actually what Jones and his team were doing was absolutely bona fide and was a warning to us all of what was coming down the line. Luckily, hopefully we’re starting to see the light.”

Many had the opportunity to speak to their character’s real-life counterparts – others chose not to – while some also did a lot of research into the actual events portrayed in the drama. Watkins immersed himself in science books recommended to him by Jones. But Broughton’s approach was always to retain a very naturalistic, intimate acting style to stop the series from becoming “too showy” or straying into mimicry, while also giving the actors as much freedom as possible on set.

“We’re not doing imitations but we’re representing the essence of those characters and what they experienced under that intense pressure,” she explains. At the centre of it is this very intimate portrayal of a brilliant scientist under pressure. In the first half-hour, he doesn’t speak. We did a lot of breath work with Jason because it’s about his inability to cope with this unprecedented media storm. It was a manufactured controversy and he was in the eye of it.

“Then you’ve got the university story and the police inquiry. You go to Whitehall [a metonym for the UK government] and even COP15 [in Copenhagen in 2009], so it’s a story with resonance at all those narrative levels. The challenge for us was to interweave all those stories. There’s also backwards and forwards movement in the narrative, so in the cutting room it was very much about trying to make that story clear and engaging at an emotional, psychological and political level.”

Watkins, in particular, was “incredibly brave and humble and committed to finding Phil’s truth,” Broughton says, noting the work the actor did to find his character’s voice. “Once he got the voice, he found the physical iteration of Phil, which was one of being very broken. He’d cave in his stomach and hunch his shoulders. He was carrying the physicality and vocal presence of Phil as well as the emotional truth. He really did have to go places to find that performance.”

Filming The Trick began in June this year, with Vox employing the now familiar Covid-19 protocols to which they had already become accustomed during the last 18 months on productions including Cyswllt (Lifelines), which was shot remotely in the early days of the first UK lockdown.

Before then, however, the producers sought to maintain the film’s authenticity and sustain their relationships with the key figures portrayed in the film by sharing the script with them to ensure its factual accuracy right up to the moment it was committed to film. “It was very important for us that we weren’t going to get letters saying, ‘Actually, you were factually incorrect about that,’” Bate says. “How we and Pip have translated their relationships with each other and what they say, of course, is the dramatic licence we have but, factually, we were pretty hot on making sure we weren’t making mistakes.

“It felt a bit like going into the lions’ den when I went to see Phil and Ruth at their house in Norfolk to sit down with them and get their reaction. If they’d have said, ‘Actually, we think you’ve got this really wrong and we can’t support this,’ the whole project would have wobbled. But thankfully they were incredibly moved by the piece, felt it was 97% spot-on and were very supportive and gave us some minor notes to make it absolutely factually correct. I do feel we’ve done justice to the truth of what happened 11 years ago. There will still be the ‘Flat Earthers’ who come out and say we’ve got it all wrong, but I know where I’d put my money.”

Despite Philip ultimately being vindicated, Sheers says ‘Climategate’ did have the effect of pushing back opinion on global climate change and delaying any subsequent action to combat its effects.

“That is why I felt this story was so important to tell now,” he says. “In 2009, it looked as if the world was about to take serious action on greenhouse gas emissions. But other forces were at work; forces that wanted to keep doubt alive in the conversation, that wanted to slow action on curbing the burning of fossil fuels. We still don’t know who was behind the hack. We do know, though, that around the same time there were five other attempted breaches of other climate research centres around the world. We know that what happened was a strategy, a game plan.”

Now, ahead of COP26, “we are once again at a point when it seems as if the world will finally act on the crucial issue of global warming and the burning of fossil fuels,” he says. “It’s taken one generation to break the planet and we now have just around 10 years left for another generation to fix it. I hope The Trick speaks to the nature of those stakes, to the importance of how the narrative of climate change is communicated and to the risks to all of us when truth and facts are manipulated in the interests of the few over the many.”

Bate says the last 10 years “have been a disaster” that mustn’t be repeated, and he shares Broghton’s hope that The Trick – which debuts tonight on BBC One – will tell a love story, a thriller and also a cautionary tale about the state of the planet.

“There were dark forces who wanted to set up disinformation to make people think, ‘If climate change isn’t happening, that’s great news,’” he says. “I’m afraid the bad news is it’s here and we’ve got to deal with it.”