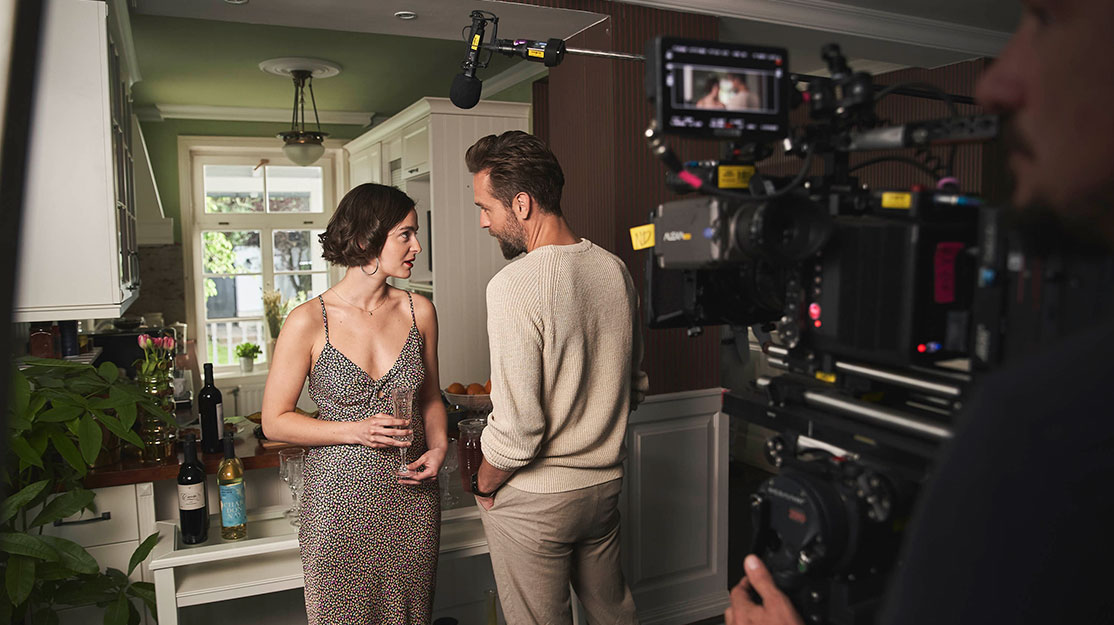 Having already transitioned from actor to author, Catherine Steadman has now moved into TV screenwriting by adapting Jess Ryder’s thriller The Ex-Wife for Paramount+. She discusses playing with character expectation and why she wouldn’t dramatise her own novels.

On the set of The Ex-Wife, Paramount+’s first UK original drama, Catherine Steadman might have cut a relaxed figure sitting behind the monitor – and for good reason. Having built up a career in front of the camera in shows such as Downton Abbey, she was happy not to have to learn any lines for a series that marked her first entry into TV screenwriting.

As well as ITV’s global hit period drama, Steadman’s acting credits include The Rook, Fearless, Tutankhamun and The Tudors. But for the past eight years, her on-screen career has taken a step back as she has focused on writing. Her first novel, Something in the Water, was published in 2018, followed by Mr Nobody in 2020 and The Disappearing Act in 2021. The Family Game is being published later this month.

Now she has turned to TV writing for the first time by shepherding an adaptation of Jess Ryder’s novel The Ex-Wife for recently launched streamer Paramount+. Produced by Clapperboard Studios, Night Train Media and BlackBox Multimedia, the four-part series follows Tasha (Celine Buckens), who appears to have the perfect life – she lives in a beautiful house with loving husband Jack (Tom Mison) and beautiful baby girl. But the constant presence in their lives of Jack’s ex-wife Jen (Janet Montgomery) means she starts to think something is going on between them. Should Tasha trust her instincts, or is she just jealous?

“I’m incredibly lucky that we got the director and the cast we did,” Steadman tells DQ. “They started shooting before I could come out to set, but everything they were sending me was just beautiful. Then I got there and they were delivering take after take and nailing it. It was also great to be on set and not have to worry about your lines. People were going off to do costume changes and I was just sitting by the monitor. It was lovely.”

From an early age, Steadman wanted to be part of the entertainment industry and to tell stories, but found acting offered an easier route into the profession.

“I thought acting was the only way in. But once you’re in, you see the mechanics of who’s responsible for which aspects and I thought, ‘If not now, when?’” she says of moving into writing. That was the moment she decided to write her first book, not knowing how it would work out and only showing people once it was finished.

Writing then superseded acting, and Steadman says she now gets the same buzz from writing that she does when she’s in front of a camera. “I feel like it fulfils the same impulses. Then with scriptwriting, it’s that collaborative process [that appeals] because it doesn’t just end when you hand in the script. When they’re shooting, they might not be able to get a certain location and they’re like, ‘Would you be able to set this here?’ It’s an ongoing, organic process,” she says.

Distributed by All3Media International, The Ex-Wife emerged from discussions Steadman had with producer BlackBox, first about the rights to one of her own novels and then about whether she would be interested in writing something. Because she hadn’t written a script before, she said she would be interested an adapting a novel. Then when she read Ryder’s book, she found the perfect material in a story that is packed with twists and turns but always rooted in reality.

“When Tasha starts to get into a pickle, there are these sudden twists that are so real. I thought this would just make great telly,” she says. “We did the outline, the pilot and then Paramount came on board and asked for a four-parter instead of a three-parter. They’ve been really high concept with the whole thing and wanted the production values to be amazing, and the cast are really exciting. Celine’s been nominated for a Bafta and an International Emmy [for her role in last year’s BBC miniseries Showtrial] and Tom is a fantastic male lead. Janet’s brilliant and Jordan [Stephens, as Tasha’s friend Sam] is amazing. They came on board and the shoot in Hungary was kind of dreamy.”

As is the trend in psychological thrillers, Tasha and Jack’s home is impossibly luxurious. Enormous windows serve to heighten Tasha’s sense of paranoia as Jen appears at the most inopportune times, while the prologue to the series injects a sense of foreboding. Viewers will see Tasha pushed to breaking point during a dramatic crash, before the story jumps backwards by three months to reveal the start of her downward slide.

When it came to finding the right house on location in and around Budapest, “there were a lot of conversations and we had everything crossed we’d be able to get this amazing house,” Steadman says. “Brian [O’Malley, director] does it such justice because there are so many incredibly beautiful drone shots around it. Me and Brian talked about the idea of it almost being like a doll’s house, and how there’s a constant eye on it through the glass – or at least it feels like that. That’s heightening the tension, and he’s totally nailed it with the drone shots. They kind of hover around the building. It’s really beautiful.”

As an actor, Steadman has read her fair share of scripts. So when it came to writing The Ex-Wife, she knew she wanted every character in the show to be “playable,” with their own dialogue and backstory that means they are not only on screen to serve the main story but also often have their own problems to deal with. As Tasha’s opening monologue debates the grey area between good and bad actions, teasing events to come, Steadman says The Ex-Wife also plays into the growing consensus on screen that hurt people hurt people, rather than the idea that terrible people are simply wandering around doing awful things.

“Coming from an acting background, I wanted everyone to have that richness and depth of character, which is important in a thriller as well because we can end up with a cackling baddie, and I definitely didn’t want that,” she says.

That baddie could quite easily be Jen, and viewers will be forgiven for initially seeing her as such – whether she is letting herself into her ex-husband’s home unannounced or wandering off with Tasha’s young child in a supermarket. But Steadman hopes every episode will play with the audience’s ideas of who is in the right, morally, and who has the worst intentions.

All the characters are operating in grey areas, and The Ex-Wife is “more about the audience as they’re watching, deciding who is actually the worst character or the best character,” the writer says. “I wanted to play with all those expectations that were in Jess’s book. It’s nice to be able to flip them because we’ve all seen thrillers. We all have expectations of who it’s going to be. I hope both Jess and I have subverted those slightly.”

Perhaps nobody is more aware of what may or may not be going on than Tasha herself, as Steadman calls the show “a thriller for a generation that is aware of the tropes of thrillers.”

She adds: “Tasha is aware of the things she should be looking for and she’s aware of what’s what, yet still she’s going to be taken for a ride. Tasha is Gen Z and she’s someone with the sensibilities of that generation coming up against the tropes of the thriller world.”

The “real trick” to writing the show, Steadman notes, was giving the characters enough space to breathe in a plot-heavy four-part thriller. But “that’s my bread and butter, which I love doing,” she adds. “What most actors are used to doing when they get any script is going, ‘How can I inject humanity and the everyday sense of this person living their life from when they wake up to when they go to bed?’ – not just when they’re calling the police or all of that stuff. I really enjoy trying to make space for that.”

Compared with writing a novel on her own, Steadman recognised the relatively fast speed at which she was able to write all four episodes, while production notes could be fed back immediately. She also enjoyed the collaborative nature of making TV, from discussions about character to choosing locations.

Steadman held her breath when filming had to be stopped after someone on the production tested positive for Covid. But she says every member of the cast and crew was invested in getting the show finished. “I really felt for a lot of people on this job; it was something they wanted to get made and they felt they were putting their stamp on it as well. I feel like it’s one of the good ones,” she says.

As for viewers, Steadman hopes The Ex-Wife – which launches tomorrow – grabs hold of them and doesn’t let go until the credits roll at the end of episode four. “It’s a thriller, so I just hope it engrosses them and takes them to a different place for a while,” she says. “God knows, we all need a bit of entertainment at the moment.”

Steadman is now plotting her next moves in TV, with a new project lined up for next year, while she is also working on her next book. Meanwhile, she is still auditioning for acting roles but admits it would take a really good offer to tempt her away from another thing she really loves doing. “At the moment, I feel like I’m more drawn to the writing. Now I’ve started doing a bit of screenwriting, I’m really enjoying that and it feels as collaborative as being on set – and you are on set, without the pressure of learning your lines.”

But while she is developing original material for TV as well as looking at potential future adaptations, would she ever bring one of her own novels to the screen?

“I’ve been asked that, and you know what? I don’t think I would,” she says. “When you write something in a certain format, it’s like you’ve written it for that format. I feel like I have enough ideas to go around and I can write a fresh one for TV rather than going back over something I’ve already worked on. I’m probably just going to write books, and other people can adapt those.”