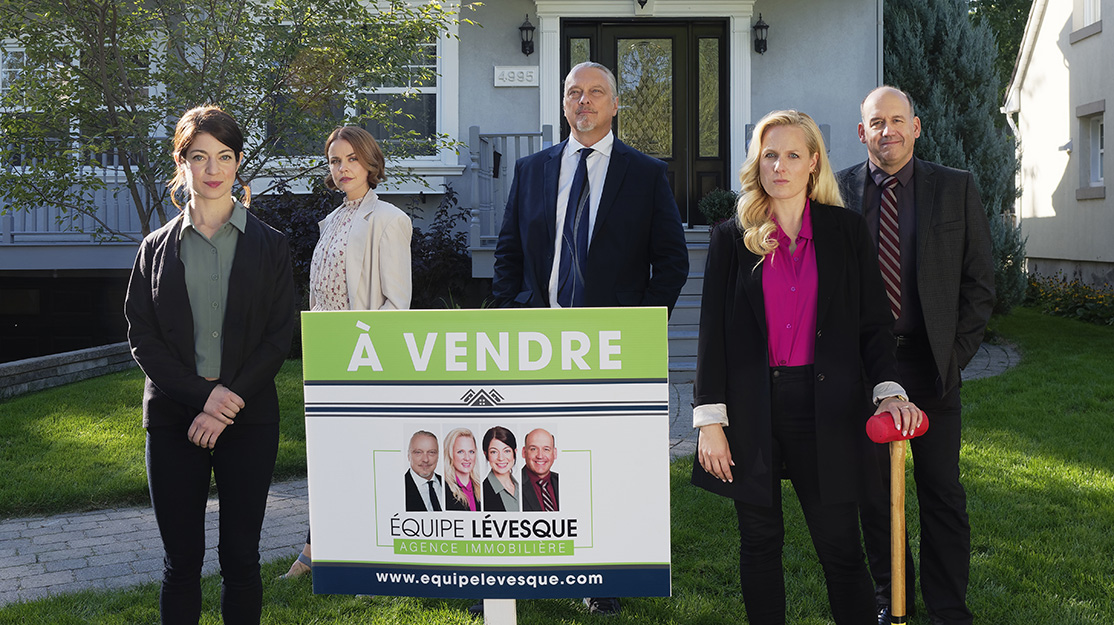 For most people, the tedious, often soul-sapping experience of buying or selling a house isn’t a laughing matter. But in Québécois comedy Contre-Offre (Counter-Offer), the real estate industry is played for jokes – and plenty of drama too – in the story of a family-run business.

The small Levesque agency at the centre of the series is desperately trying to survive, with father and agency founder Alain on the verge of burnout. Careerist Christine, his eldest daughter, is courted by rival firm Intermax, while her sister Daphnée is a single mother who splits her time working at the company and looking after her daughter, Lulu.

After abandoning dreams of a great career as an actress, third sister Jade is forced to return to the family business, where the team is completed by Marcel, a long-time colleague and friend of Alain who has convinced himself he’s one of the leaders of the company.

Dysfunctional but endearing, the team always put their difficulties aside to support their buyers and sellers as they seek happiness and success within the hectic real estate jungle.

Based on an idea by actor Marie-Chantal Nadeau, who qualified as a realtor alongside her acting work, the show comes from producer and director Martin Roy and head writer Pierre-Louis Sanschagrin. The cast is headed by Normand D’Amour (Alain), Marie Soleil Dion (Christine), Emmanuelle Lussier Martinez (Daphnée), Noémie O’Farrell (Jade) and Antoine Vézina (Marcel).

“The show is about three very different sisters,” says producer Nicola Merola, president of series producer Pixcom. “Christine, the oldest, is the controlling, bossy sister. Daphnée is the middle one, she’s hyper-sensitive and definitely lacks confidence but she has a big heart. She devotes herself to Lulu, her 11-year-old daughter with ADHD. Jade, the youngest, landed in the wrong business. She always dreamed of being an actress but was never successful.”

“When you think about the story as The Three Little Pigs, the one who builds the house with bricks is Christine, Daphne is the one that builds it with wood and Jade wants to be an actress and builds her house with hay,” says producer Charles Lafortune, Pixcom’s VP of content and creative affairs. “You have the Big Bad Wolf, which is the competition. Then there’s one guy, Marcel, who’s not part of the family and is the old-school real estate agent. He’s the outsider but he’s this loveable character who feels a bit like [Seinfeld’s] George Costanza.

“The father leaves the company and goes into burnout, so at the beginning of the series they end up having to make the company work because the father figure is not there any more. It’s a revolving door series because since it’s a real estate agency, characters come in, you have new listings, open houses, sales and foreclosures, and the sisters’ own personal lives. When we were first pitched the series and started to work on it, it was the kind of series where you thought, ‘Why hasn’t anyone thought about this before?’ It’s a really great universe.”

The focus of the 12-part series, which debuted on Bell Media’s Noovo earlier this year, is the family business where the three sisters each struggle to overcome their own personal challenges, to find love and be successful in their own ways.

The network “always wanted to make sure this wasn’t a sitcom but a comedy series with moments of real human emotion, so at the end of the day that’s what the series is about,” says Merola. “Some episodes are really fun. Some others have a little more drama in them, but always in a fun, light, never superficial manner. Comedy series need dramatic moments to be able to jump back into the comedy, so the balance is strong.”

“Like Sex & the City or Friends a lot of shows work really well by creating a family unit,” Lafortune notes. “Even in prison, the characters in Orange is the New Black are a dysfunctional family. Here, the three sisters are a family but then the real estate agency widens that family, so Marcel is the uncle in the show. The backdrop of real estate is interesting because it also provides opportunities for comedy, with the buyers and sellers and all sorts of stuff, but in the end we can go outside of the real estate business and it still feels real and funny. Sometimes they can’t stand each other but they love each other. They get into feuds and it’s funny, they apologise. The sisters are three fingers on the same hand so they have to work it out together.”

Sanschagrin wrote the scripts with Marie-Josée Ouellet, Martine Pagé, Kristine Metz and Julien Tapp, while Roy employs a camera style not dissimilar to that used in mockumentary Modern Family, although without the characters speaking directly to camera or breaking the fourth wall.

“That was something Martin wanted. He wanted to maintain that authenticity all through the series,” says Merola. “What makes a show successful in Quebec is this element of familiarity. When viewers watched the show, the comments were that it feels very familiar – the situations, the dialogue – and whether it’s the family situations or the business situations, there’s something very relatable.”

Filming took place last year during the Covid-19 pandemic, with the need to find more than 20 homeowners willing to leave their home and allow it to be used by a TV crew proving to be particularly challenging. Each location was then shot out before moving to the next. “We made it,” says Merola. “We always find solutions, that’s what we do in television and this is universal. We never have enough money to produce the show in our brain but we always manage to produce a show that works.

“The protocols we have in Quebec, especially in the TV business, are very well done and everyone respects that to the max. We also got help from SODEC, the Quebec agency that supports that arts, television and film, because shooting during Covid is more expensive. You need more days because everything is slower and heavier. But I don’t think you can tell.”

With a second season ordered and set to begin shooting in June, the story of this family-run business isn’t finished yet, while Merola believes its universal themes can appeal to an international audience. The series is among the digital premieres on offer during C21’s Content Quebec On Demand online event.

“Real estate is one of the most stressful things you do in life, it’s a big purchase,” he says. “For most of us, it’s the biggest purchase we have in life. Those elements will resonate all over the world, just as they did in Quebec.”