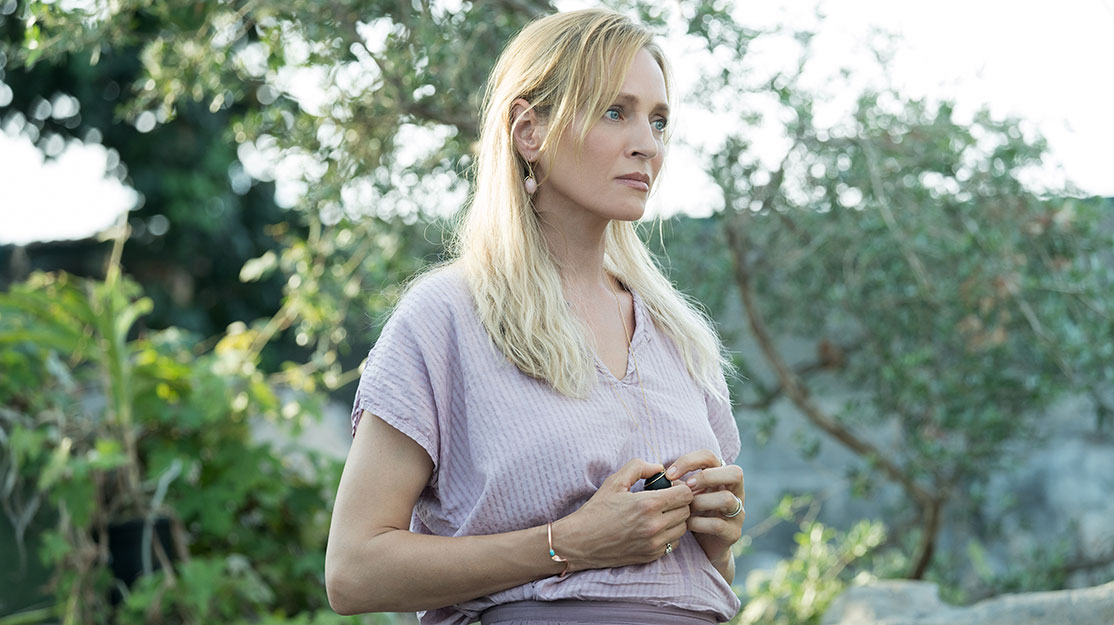 Pulp Fiction and Kill Bill star Uma Thurman makes her Netflix bow in psychological horror series Chambers. The actor talks to DQ about the appeal of the drama, working with a young cast and why film is still her first love.

Uma Thurman’s career has been defined by her big-screen partnership with director Quentin Tarantino that has seen her star in seminal movies such as Pulp Fiction and Kill Bill.

However, the actor is no stranger to television, having appeared in Broadway-inspired Smash, the US adaptation of Australian series The Slap and Bravo dark comedy Imposters – and now Thurman has become the latest Hollywood star to link up with Netflix, making her debut on the global streaming platform in psychological horror Chambers.

The series stars Sivan Alyra Rose as Sasha Yazzie, a 17-year-old heart attack survivor who becomes consumed by the mystery surrounding the heart that saved her life. The closer she gets to the truth about the death of her donor, Becky Lefevre (Lilliya Reid), the more Sasha seems to be taking on the personality of the dead woman, including the most sinister aspects.

Thurman plays Becky’s mother, Nancy, who forges a hesitant relationship with Sasha – only to find out her daughter might not be as dead as she thought. Scandal’s Tony Goldwyn is Becky’s father, Ben.

The 10-part drama, which launches worldwide tomorrow, received its international premiere last month at Series Mania in France, where Thurman revealed that a meeting with creator Leah Rachel led her to join the show.

“I met Leah, I read the pilot and I thought it was really beautiful,” the actor says. “We just hit it off. I thought she had something really special to offer and I took the great leap of faith.

“I was grabbed by the metaphor of the heart and the fact there’s a strong female energy, and the drama and the tragedy of the parent I was playing, and the relationship between her and this young woman who is struggling with her identity in a very hardcore way.”

Rachel says Chambers became a psychological horror because that was what the plot demanded. This style and tone is laid out in the trailer, which maximises those genre themes with some intense music and quick cutaways that reveal a creepy dimension to the drama.

“[The genre] is found through the story; the story requires it,” says Rachel, who wrote the series with Akela Cooper. “Dealing with the loss of a child, dealing with the loss of a sister, to me that feels like a psychological horror already. So it definitely leant itself to this in the story. It can be an extension of human behaviour and emotion, in the same way that dance and music can.”

Executive producer Jennifer Yale picks up: “With psychological horror, we were always trying to play the metaphor first and foremost – the teenage girl and how she feels somewhat out of control with her body. And in our show, she literally is out of control.

“We also wanted to play with the other characters and what they’re going through. Nancy struggling with the loss of her child, only to meet this young woman who has a piece of her child in her and then to start to see pieces of her child somewhat slip out or come through; that psychological trauma that plays with Nancy and her thinking, ‘Is this just me? Am I going crazy? Or is this actually real?’ That’s very much how we were trying to play with the horror element, through the characters.”

As a mother of three, Thurman says there is no greater fear for a parent than losing a child. “That was very compelling to me about the character,” she says of Nancy. “She’s a woman being completely tormented by grief and is also experiencing the sense of haunting. You have a stay-at-home mother who identified with herself only really as a mother and, in fact, she really didn’t know either of her children. She’s truly haunted.”

With a screen career spanning more than 30 years, Thurman says she is “excited” about the current creative explosion TV drama is enjoying, but adds: “I love film – let me not mess around! I’ve really started to nurture my own theatre career because that really is the actor’s medium, but I’m really excited about the freedom, the space to breathe and the exploration of doing television. It’s a very democratic art form; it’s available to people. But I quite desperately am first and foremost loyal to film.”

Best known for her work with auteur filmmakers, Tarantino among them, Thurman says her decision to accept parts is more often based on who the director is than the role itself. “But as far as this baptism of fire, this new medium, for me, Jennifer has more experience in television compared to us,” she says. “We really didn’t know what we were doing and had to figure it out. Jennifer is much more versed [in television].”

Yale, whose credits include Legion and Outlander, also praises Thurman’s behind-the-scenes involvement. “We were very lucky to be able to have Uma come and work on this show and bring her expertise and also her wealth of knowledge,” she says. “We had a pretty inexperienced cast and we really rose to her level because she came prepared every day. She was the best ‘first person on the call sheet’ on any show I’ve ever worked on. I cannot say enough how lucky we were to have her on the show.”

Thurman responds: “When you’re working with young people, the first thing you do is, when they call you to set, you go immediately. You get there before they do, which is basic professionalism and discipline. It’s a privilege to get to do creative narrative storytelling work of any kind. It’s been the greatest privilege of my life to get to live a creative life, and I think you pay back your team with professionalism and passion.”

But as a movie star now appearing in a Netflix series, what does Thurman think of the streaming platform’s fight for recognition for its feature-length output? “We’re in such a rapidly changing technology [landscape] that this thing is going to not even be a debate soon,” she responds. “It’s very expensive to buy a ticket and go to a movie theatre so, as much as I’d like someone to [go to the cinema], I wouldn’t want them not to experience the communication that people can have on any device. It’s pure snobbery. But I do love film so I can say people should enjoy the communication of sharing stories together in any way they can possibly achieve it.”

Rachel agrees, adding: “It’s great that art in many forms is becoming more accessible to people. Storytelling is changing and stories are being told from perspectives that are different, and I think it’s really important for everybody to be able to digest cinema. The meaning of the word ‘cinema’ might change behind it, but art is art.”